ABSTRACT: This review aims to give a comprehensive report of the quinoline ring, related to its therapeutic values. The quinoline and their derivatives have been summarized herein with the IC50 value as per the published research. The importance of the heterocyclic scaffolds has been a hit target of the scientist to synthesize; in view of that bioactive scaffold, the “quinoline” is taken as a reference to give the importance to sensitize the synthesis of the concern bioactive molecule. All quinoline related activity is compiled here as per as our knowledge is a concern. Focuses have been made on significant examples where the impactful activity was reported.

INTRODUCTION: The quinoline scaffold is widely present in several natural and synthetic molecules and exhibits different pharmacological activities. Quinoline 1 or 1-aza-naphthalene or benzo [b] pyridine is a nitrogen-containing heterocyclic aromatic compound Fig. 1. Quinoline shows both electrophilic and nucleophilic substitution reactions. It is prone to ally the electrophilic attack is at the 5- and 8-positions of quinolone due to the non-resonating lone pair of electrons on the nitrogen atom of pyridine. The π -electron densities have been calculated for quinoline by a molecular orbital method, which shows that 2- and 4-positions of the pyridine ring favors for nucleophilic attack because of the electron deficient pyridine ring.

The presence of electron-donating groups at 2- and 4-positions of the quinoline ring also increases its basicity 1. The nitrogen atoms present in the molecule alter the dipole moment and the preference for the tautomeric forms. Hydroxyl derivatives such as quinoline-2-(1H)-one 2 and quinoline-4(1H)-one 3 shows tautomerism to 2-hydroxyquinoline and 4- hydroxyquinoline Fig. 2 2.

Antimalarial Activity: Ferrochloroquine derivatives 4 consisted of two nitrogen atoms in the side chain of chloroquine separated by the variable length of methylene linker synthesized. Most of the derivatives exhibits nanomolar inhibitory effects on the sensitive and resistant strain of Plasmodium falciparum. They observed that hydrophobic ferrocenyl group and variable length of methylene linker are a key determining factor for antimalarial activity 3.  It has been found that derivatives of 7-chloroquinolinyl thiourea 5 showed antimalarial activity 4. Ureido-4-quinolinamide derivatives 6 were synthesized and evaluated against chloro-quine-sensitive Plasmodium falciparum strain 5. 4-hydroxyquinoline β-glucosides derivatives 7 established as novel agents which showed inhibitory activity against chloroquine-resistant malaria 6 Fig. 3. 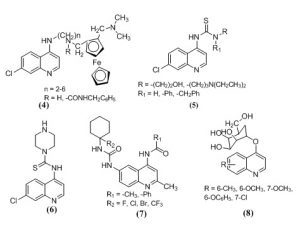 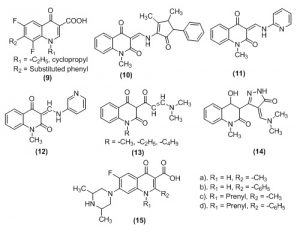 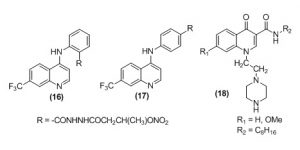 Antineoplastic Activity: 4-hydroxyquinoline derivative 22 was synthesized which showed inhibition of histone acetyltransferase (HAT) 14. 3-cyanoquinoline derivatives 23 and quinoline carboxylic acid derivatives 24 were synthesized, both exhibited inhibitory activity on insulin-like growth factors for the treatment of cancer 15, 16. Compound 7-trifluoromethyl quinoline 25 was synthesized which was found to exhibit inhibitory activity against c-Met kinase (IC50 ˂ 1 nM). It inhibited c-Met phosphorylation in c-Met dependent cell lines 17. It has been reported that substituent groups at the quinolone scaffold play an important role in the activity. 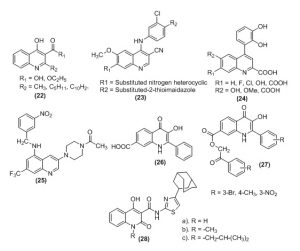 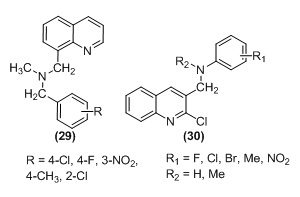 Antifungal Activity: A series of compounds containing quinoline derivatives 29 with different substituent groups at the side chain were synthesized and found to exhibited antifungal activity. Derivatives contained different bulkier aromatic rings in the side chain were designed by i.e., Leap-Frog program a drug designing tool 21. Compounds 30 containing 2-chloroquinoline with substituted aromatic amine were synthesized and exhibited antimycotic activity 22 Fig. 8. 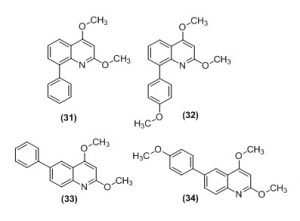 Glycine-NMDA Receptor Antagonists: Quinoline-2, 4-dione derivatives 38 were reported which showed selective antagonistic activity on glycine-NMDA receptor 26. Compound 39 was reported as a novel non-peptide GnRH receptor antagonist with an IC50 of 10 µM. Compound 40 was found highly potent (IC50 of 0.032 µM) in GnRH binding activity with at the rat receptor 27 Fig. 11.

Anti-tubercular Activity: It has been reported that compounds which contained CF3 and F group exhibited inhibitory activity against Mycobacterium tuberculosis 28. Compounds (41a-c) containing quinolone and morpholino group were synthesized. Different substituent groups were designed to add to the quinolone scaffold, and they exhibited good inhibitory activity against M. tuberculosis 29 Fig. 12. 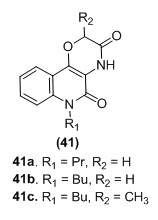 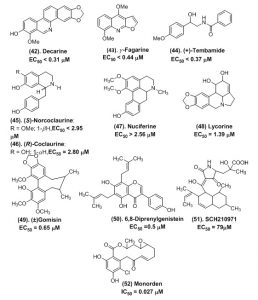 Anti-HIV Quinoline Derivatives: The literature review reveals that these are some of the natural products with potent anti-HIV activity (EC50/IC50 value less than 1.0 µM or 0.8 µg/mL), act through different targets 30, 31, 32. From those, quinoline scaffold has been listed as anti-HIV derivatives Fig. 13.

Quinoline-A Versatile Scaffold: The Quinoline scaffold is widely present in several natural and synthetic molecules. The molecules with the scaffold have different pharmacological activities. Literature reveals that quinoline derivatives have shown to possess antibacterial, antifungal, anti-parasitic, antiviral, antiprotozoal, anti-neoplastic, and anti-inflammatory activity 33. Substituted quinolones 53 - 55 were synthesized and found to exhibited antiviral activity against HIV-1 34. Compounds 56 - 57 were synthesized containing N-substituted-4-quinolone with carboxylic acid and its ester group at C-3 position which were found to exhibit antiviral activity against HSV-1 virus with EC50 of 0.7 and 0.8 µM respectively 35. 8-hydroxyquinoline derivative 58 and 59 established as potential HIV-1 integrase inhibitors 36 Fig. 14. 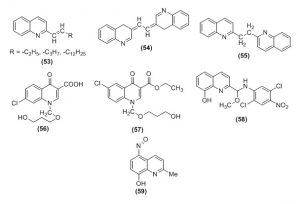 CONCLUSION: The bio relevant heterocyclic scaffolds have been a God gift for drug discovery scientists from the industry as well as from academia. Various highly functionalized hetero-cyclic has been studied for their therapeutical activity, among all the quinoline ring based molecules possess a wide space in the field of drug discovery or development. The conclusive report with the relevant data is presented here with the proper citation, which will be beneficial for the reader, to pursue research in the quinoline based pharmacophore. The drug discovery process is oriented toward the basic skeleton, so the choice of basic ring will be easier for the scientist in the future after going through the present literature. The library of compounds based on the quinoline is described here with their activity and concern target.  This review has highlighted the importance of active scaffolds of quinoline.