ABSTRACT: Neonatal jaundice is one of the most common diseases among neonates that may cause irreparable complications such as kernicterus. This systematic review article was conducted to report and introduce medicinal plants that are used to treat neonatal jaundice in Iranian traditional medicine. To conduct this systematic review, the terms jaundice and icterus combined with the terms ethnobotanical, ethno-medicinal plants, ethnopharmacology, phytotherapy, and Iran were used to search for potentially relevant publications in Google Scholar, and Scientific databases ISI, PubMed, and Scopus. According to ethnobotanical evidence, six plant species from five families consisting of Cotoneaster discolour, Ziziphus jujube Miller, Hordeum vulgare L., Alhagi graecorum Boiss, Fumaria parviflora, and Chicorium intybus have been more frequently reported to be used to treat neonatal jaundice in Iran on which a number of studies have been conducted. However, a combination of two or more number of these plants has been reported to be used for treating neonatal jaundice. Although the plants and their compounds cause reduction in neonatal jaundice through different mechanisms of action, they cannot be considered an independent treatment in most cases. Therefore, it is recommended to use plants and their compounds as a complementary treatment to reduce bilirubin.

INTRODUCTION: Newborn jaundice is one of the common health care issues in Iran 1 and the world such that around 80% of preterm infants and 60 % of term infants develop this condition 2. This disease occurs on the first days of life for several reasons such as giving birth in places other than general hospitals, polymorphism UGT1A1, low gestational age, low birth weight, sepsis, and high transcutaneous/total serum 3, reasons due to dissolving hematoma,

a blood incompatibility between mother and fetus or bruises on the baby's body, metabolic diseases and liver diseases 2, 4, G6PD deficiency as well as unknown reasons 1. Newborn jaundice is a complication that is easily diagnosed but requires to adopt a therapeutic approach quickly 5, because this complication may lead to a destructive complication named encephalopathy bilirubin or kernicterus if left untreated 6, and can cause neurological disorders, cerebral palsy, auditory nerve damage, choreoathetoid, and other problems 7. From medical perspective, neonatal hyperbilirubinemia is categorized into different types the most important of which are neonatal jaundice and hemolytic jaundice. Phototherapy, use of chemical drugs, and vaccination are effective to treat and prevent hyperbilirubinemia 5.

Phototherapy is one of the most important approaches to treat neonatal hyperbilirubinemia that has been used in the modern medicine for some decades 8 - 10. However, certain short-term complications such as thermal imbalance, electrolyte imbalance, dehydration of the body, interfering with emotional interaction between mother and infant, tan baby syndrome, and circadian rhythm disorders in infants have been reported to occur after use of phototherapy 11.

Besides that, induction of changes and mutations in DNA 12 and reduced duration of exclusive breastfeeding 13 are some other complications due to phototherapy. Therefore, it is necessary to seek out alternative therapeutic approaches with fewer side effects and use of medicinal plants to treat diseases has attracted much attention 14 - 22. Iranians use several medicinal plants and plant-based compounds alongside conventional treatments as well 23 - 31. Certain reasons such as fewer side effects, lower costs, more convenient access, and higher satisfaction with medicinal plants have caused mothers to use them for neonatal jaundice 32. This systematic review was conducted to report and describe the medicinal plants whose use in treating neonatal jaundice in Iran through reviewing the ethnobotanical evidence and clinical studies. Phytotherapy choices in Iranian traditional medicine can help pharmacists and other researchers develop more effective drugs for treatment of neonatal jaundice. To conduct this review article, the terms jaundice and icterus combined with the terms ethnobotanical, ethno-medicinal plants, ethnopharmacology, phytotherapy, and Iran were used to search for potentially relevant publications indexed in databases ISI, PubMed, and Scopus. Besides that, the researchers searched for relevant library references to medicinal plants that addressed traditional use of medicinal plants. After retrieval of relevant publications, the abstracts and other references retrieved by the researchers were analyzed and only those related to the plants whose effects in reducing neonatal jaundice according to the traditional medicine were investigated in experimental and clinical studies were selected. The articles and references without any citation were excluded from final analysis.

TABLE 1: THE MOST IMPORTANT PLANTS USED TO TREAT NEONATAL JAUNDICE IN IRAN

Other studies have reported that use of cotoneaster is useful for neonatal jaundice but have subjected it to simultaneous use standard treatment 41. However, only a study on the effect of cotoneaster drop reported that the decrease in bilirubin level was not significantly different 42. According to the available evidence, cotoneaster can be suggested a standard product alongside phototherapy to decrease neonatal jaundice and have pharmacists take it into account.

Ziziphus jujube: Z. jujuba, commonly called jujube, is used as a fresh or dried fruit. Ethnobotanical studies and review articles have indicated that Z. jujube has hypo-bilirubinemic properties and can be used to treat jaundice 33-35, 41, 43. A study demonstrated that 1 mg/kg of Z. jujube extract caused decrease in the serum bilirubin levels of infants after 12 days 44.

Hordeum vulgare: H. vulgare has long been used to treat different diseases including jaundice according to Iranian traditional medicine 32, 45. In a study, infants were assigned to two groups of 45 each, cases and controls. In the case group, soft and smooth H. vulgare flour was sprinkled on all parts of the body except for around the umbilicus and face. In the control group, the infants were treated with phototherapy alone. The findings demonstrated that use of this plant caused decrease in both hospital stay and bilirubin level 45.

Chicorium intybus: C. intybus is known as a widely accepted drug among the therapists of Iranian traditional medicine and infants are washed with this plant so that they can use its anti-jaundice properties or water-diluted essence of this plant can be orally administered to the plants. Besides that, mixture of C. intybus with cotoneaster and manna and then oral use of this mixture by mothers is another approach to administer this plant 32. A study on synergistic effect of some plants on neonatal jaundice found that among the extracts of certain plants such as C. intybus, Alhagi pseudo alhagi, Z. jujuba, F. parviflora, only C. intybus caused a significant decrease in the bilirubin levels of the infants through affecting bilirubin directly 42.

Manna: Manna is a gum that is derived from the leaf and branch of a plant named Alhagi. Ethnobotanical studies have shown that in Iran, oral use of manna, alone or in combination with cotoneaster, by mother or infant (at lower doses) and washing infant with infusion manna is effective in treating jaundice 32, 34, 35. Saboute et al., studied the effect of oral manna on jaundice in hospitalized infants and reported that manna was not effective on neonatal jaundice as a plant-based drug 46. Moreover, a study showed that use of manna extract caused no significant difference in infants' bilirubin levels between before and after use 42. In addition, a clinical trial determined that use of manna caused no significant effect on decrease in neonatal jaundice and therefore this plant cannot be used as a hypobilirubinemic drug 47. However, it is necessary to investigate the difference in methods to use this extract between traditional medicine and modern medicine in additional studies.

Fumaria parviflora: F. parviflorais from family Fumariaceae and is orally used as boiled and/or alongside brown sugar and Sisymbrium irio. This plant is used as an ethnobotanical treatment for neonatal jaundice 32, 34. However, some clinical trials have confirmed that this plant has no effect in treating neonatal jaundice 42, 43. Some other plants, including Descurainia sophia, Saccharum officinarum, Salix alba, Viola odorata, and Prunus domestica, have been used to treat neonatal jaundice and have been less frequently investigated in additional studies despite use of them in traditional medicine 32, 34, 35. In some cases for which plant-based essences and extracts are used, it is likely that a combination of these plant-based compounds is used. The main component of most of these combinations is cotoneaster extract 32.

This review was conducted to report the plants and plant-based compounds that are effective on neonatal jaundice according to ethnobotanical studies and clinical trials. Several plants are used to treat jaundice by people and therapists due to having cold nature according to traditional medicine. These plants and their compounds cause decrease in bilirubin in neonatal jaundice through different methods. Increased activities of liver enzymes and enterohepatic circulation are some mechanisms that have been taken into account more frequently. Some plants decompose bilirubin directly and cause serum levels of bilirubin to decrease 43. Increased frequency of urination and defecation that cause decrease in entero-hepatic circulation is another mechanism that has been considered especially for use of Z. jujube fruit 44. For cotoneaster, no mechanism to decrease bilirubin has yet been raised but it has been confirmed that that this plant-based compound cause excretion of bilirubin via defecation and therefore decrease in neonatal jaundice 36. Taken together, the action mechanisms of plants and their compounds to excrete bilirubin offered by most studies are illustrated in Fig. 1. But, it is obvious that more accurate physiochemical studies are needed to determine the action mechanisms of the plants and plant-based compounds.

However, some other plants such as H. vulgare, because of containing antioxidant phenolic compounds 48, 49, cause decrease in oxidative stress markers and increase in antioxidant markers and therefore terminate incidence of harmful histological and biochemical changes in the liver 50, and regulate liver enzymes activities 51. Actually natural compounds such as medicinal plants via their antioxidant activities can decrease oxidative stress and in this way prevent of a lot of disease 52-59. 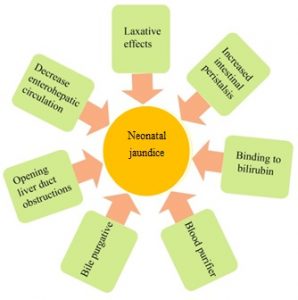 FIG. 1: ACTION MECHANISMS OF MEDICINAL PLANTS AND THEIR COMPOUNDS TO DECREASE NEONATAL JAUNDICE

CONCLUSION: Most studies consistently recommended use of phytotherapeutic properties of the plants as an alternative treatment alongside modern medicine, because plant-based treatments have a slower process, and for neonatal jaundice that may lead to irreparable complications such as kernicterus, decreased duration of treatment is a very important and essential issue. Therefore, it can be argued that plant-based treatments as alternative medicine can be used alongside standard and advanced treatments so that the level of bilirubin, duration of hospital stay, and related complications may be decreased. However, it is necessary to investigate the active compounds of the plants on decrease in indirect bilirubin more accurately. So, new phytotherapy choices in Iranian traditional medicine can help pharmacists and other researchers to develop more effective drugs for treatment of neonatal jaundice.

CONFLICTS OF INTEREST: There is no conflict of interest to declare.