Based on the scope given by traditional knowledge, present study was conducted. The aim of the present study was to evaluate the antibacterial activity of castor (Ricinus communis, Family: Euphorbiaceae) leaf extract using five bacteria; two Gram-positive bacteria (Bacillus subtilis and Staphylococcus aureus) and three Gram-negative bacteria (Escherichia coli, Proteus vulgaris, Pseudomonas aeruginosa). The concentrated ethanolic extract of the crude drug of concentration 5gm/ml was tested for antibacterial activity by determination of zone of inhibition. Gentamycin is used as standard. It was found that the concentrated extract of the Ricinus communis leaves showed a better antibacterial activity in comparison with the standard.

INTRODUCTION: Castor plant is a tall glabrous shrub or almost small tree, 2-4 m high; found throughout India, mostly growing wild on waste land and also cultivated for its oil seeds 1.  It is reported that the alcoholic extract of the leaves shows hepato protective in rats 2, 3, 4. Pericarp of Castor bean showed CNS stimulant effects in mice at low doses. At lower doses, the extract improved memory consolidation 5. A water extract of the root bark showed analgesic activity in rats5.  Herbal remedies are considered the oldest forms of health care known to mankind on this earth.

The parts of the plant used for medicinal purposes are leaves, root, stem, fruits, the complete aerial parts, the whole plant, barks (root and stem) and flowers.  However, leaves were found most frequently used part 6. Castor leaves are used externally by nursing mothers to increase the flow of milk. Castor Oil is a natural emollient and can be applied to the skin and hair as a softener. Juice from the leaves of the Castor plant is used against rheumatism, headache, dropsy (edema), abscesses, ringworms, and warts 7. Castor Oil is used for temporary constipation, but is not effective for chronic constipation. It has also been used for colic and acute diarrhea due to slow digestion. Externally Castor Oil is used to treat ringworm and itch. Castor Oil can support labor and delivery 8.

Antibacterials are the drugs that destroy or inhibit the growth of bacteria in concentrations that are safe for the host and can be used as chemotherapeutic agents to prevent or treat bacterial infections. The objective of this study is to evaluate the antibacterial activity of castor leaves in comparison with the standard, Gentamycin.

Collection of Plant Materials: Fresh leaves of Ricinus communis Linn. (Fam. Euphorbiaceae) with entire petiole were used in this study. The leaves were collected from the medicinal garden of Vignan Institute of Pharmaceutical Sciences during September- October 2010 which was authenticated and confirmed by Ms. K. Chaitanya Sravanthi, Head, Department of Pharmacognosy, Vignan Institute of Pharmaceutical Sciences, Hyderabad. The leaves after collection were washed to remove the debris and then shade dried and the dried leaves were powdered to get a coarse powder. 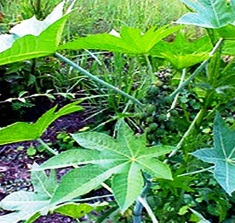 Preparation of Extract: The dried powder material of Ricinus communis (200 gm) was taken and moistened with sufficient quantity of ethanol and subjected to soxhlet extraction with 3 cycles of solvent and concentrated. The concentrated extract obtained was about 16 gm.

Experimental Model: In-vitro Cup plate method was adopted to evaluate the anti bacterial activity of ethanolic castor leaf extract. Test Organisms used for study are Gram positive bacteria: Staphylococcus aureus (MTCC740), Bacillus subtilis (MTCC441) and Gram negative bacteria: Pseudomonas aeruginosa (MTCC424), Escherichia coli (MTCC41), and Proteus vulgaris (MTCC426). All the strains were obtained from Institute of Microbial Technology, Chandigarh, India. 24hr cultures of above were freshly prepared and spread on to the sterile nutrient agar plates which were prepared by pouring 30ml of the nutrient media into each sterile Petri dish and left until hardened. Inoculation of each bacterium in separate Petri plates was done by spreading using swab which was spread on to the plates uniformly and were incubated at 37°C for 24hr 9.  Six wells were punched into the plates using a sterile cork borer of inner diameter 8.5mm on this solid seeded media 10.  Cups were filled with 100 µl (500mg/cup) of concentrated leaf extract and Gentamycin of 100 µl in each cup is taken as standard for experiment, allowed to stand for an hour to ensure proper diffusion and thereafter incubated for 24 hrs at 35oC 11, 12. Antibacterial activity was determined by measurement of zone of inhibition around each well in plate using Zone reader 13. Measured inhibition zones were recorded as mean diameter in mm 14. This was repeated six times and average diameters were recorded.

RESULTS AND DISCUSSION: The data in table 1 revealed that the ethanolic extract of the Ricinus communis leaves showed significant antibacterial activity.

Diameter of Zone of inhibition results are expressed as mean ± SEM from six observations of each strain of bacteria against each test group (i.e., plant extract and standard);

ND = Not determined since there was no inhibitory activity