ABSTRACT: Here, we evaluated the in vitro antileishmanial activities of Olea europaea linn. leave extract (OLE) on some Leishmania spp. OLE (0–160 𝜇g/mL) was considered against promastigote and intracellular amastigote forms of L. tropica (MHOM/IR/2002/Mash2) and L. major (MRHO/IR/75/ER) using MTT assay and in a macrophage model, respectively. The obtained findings demonstrated that OLE significantly (𝑃<0.05) inhibited the growth rate of promastigote and amastigotes as a dose and time dependent response. To conclude, the current investigation exhibited effective antileishmanial activity of OLE.

INTRODUCTION: Leishmaniasis is caused by an intracellular parasite which is transmitting to humans via the bite of infected sand flies. The disease is prevalent in over 90 countries and in excess of 1 million new cases were reported yearly around the globe 1. Cutaneous leishmaniasis (CL( is considered as the most frequently type of leishmaniasis that is explained by lengthened coutaneous lesions and constant scars in place of sand fly bites 2, 3.

Reviews have shown that, the greater part of the CL patients are reported from Iran, Afghanistan, Algeria, Iraq, Saudi Arabia, and Syria in the Old World; and Bolivia, Brazil, Colombia, and Peru in the New World 3 - 5.

Although researchers are studying to achieve an effective vaccine for CL, however, no effective vaccine has been discovered; accordingly, the perfection and improvement of the current agents and discovery of the new drugs are the best control option for CL 6.

At the present time, the use of antimonials compounds is often problematic due to some severe complications as well as the appearance of drug resistance 7.These controversial issues emphasize the essential necessity to discovery of new effective drug alternatives for CL. From centuries ago, herbal medicines and their derivatives, such as suxh as extract and essential oils have been considered as an unlimited source to remedy a wide range of illness 8. Olive or Olea europaea L. (Oleaceae family), is broadly found in the Mediterranean region such as Iran 8, 9.

Based on the previous reports, various parts of O. europaea have the therapeutic use in traditional remedy for example it was widely applied for treatment of diarrhea, respiratory, and urinary tract infections 10. Besides, O. europaea showed a range of pharmacological effects such as anticancer, antidiabetic, antihypertensive, anti-inflammatory, and antimicrobial effect in contemporary medicine. Reviews have reported the main chemical constituents of olive 10 nevertheless, some factors such as harvested area, the time of harvesting, and climate situations can change the chemical compositions and accordingly the biological activity of plants 11. This study was aimed to assess the in vitro leishmanicidal effects of OLE against promastigote and amastigote forms of L. tropica and L. major.

Plant Materials: O. europaea leaves were collected from rural regions of Khorramabad district, Lorestan province, West of Iran, in September 2013. The plant was identified by a botanist of Razi Herbal Medicines Research Center, Lorestan University of Medical Sciences (Khorramabad, Iran). A voucher specimen of the plant materials was deposited at the herbarium of Razi Herbal Medicines Research Center, Khorramabad, Iran.

Preparing of Extract: Twenty gram air-dried of plant materials was place into a cellulose cartridge and extracted in a 250 mL Schott Duran Soxhlet extractor (Germany) with 200 mL ethanol: H2O (70:30) for 16 h. The solvent was evaporated on a rotatory evaporator at 40°C, and the remains were stored at 4°C until analysis.

HPLC Analysis: The high-performance liquid chromatography (HPLC) device of model Shimadzu (SCL-10AVP) with the C-18 column, model Wakosil II 5C18R, with the length of 24 cm, the diameter of 6.4 mm, filler particles with a size of 5 µm, and a protective column with a length of 1 cm was used to analyze the actual sample. This device was equipped with a reciprocating pump, an oven, a continuous degassing device, a sample loop with the size of 20 µm, and a UV/visible detector of model SPD-10 AVP. Class-VP V.R 6.1 was used to control the HPLC device and process the data. A 100 µL micro-syringe, made of Hamilton Company, was used to collect the sample from the container and inject into the device. Oleuropein was detected using HPLC device by isocratic elution program with acetonitrile solvent and 50 µM phosphate buffer with pH equal to 9.2 with a ration of (v:v) 70:30. The UV detector was set at 254 nm. The chromatograms were run for 10 min at a flow rate of 1.2 ml/min at ambient temperature 12. A stock standard solution (1000 μg/mL) was prepared by dissolving oleuropein in methanol. Working standard solutions at the concentrations of 0.5 -100μg/mL were prepared by diluting suitable volumes of the stock standard with ethyl acetate.

Parasite and Cell Culture: Here the studies parasites were L. major (MRHO/IR/75/ER) and L. tropica (MHOM/IR/2002/Mash2) which kindly obtained from the Center for Research and Training in Skin Diseases and Leprosy (Tehran, Iran). Parasites were cultured at 26 ± 1 ºC in the complete tissue culture medium [RPMI 1640   supplemented with 10% heat-inactivated fetal bovine serum (FBS), 100 IU/mL penicillin and 100µg/mL streptomycin]. The murine peritoneal macrophages were also collected from male BALB/c mice (6 - 8 weeks old) by intraperitonealy administration of the cold RPMI-1640 medium (2 - 5 mL) and then aspirated cells were washed twice and put in the complete tissue culture medium.

Antipromastigotes Activity: Antipromastigote properties OLE on Leishmania spp were determined by means of MTT assay consistent with the method explained elsewhere, with some changes 13, 14. To do this, 0.1 mL of the promastigotes of both species (2×106 cell/mL) which was obtained from stationary growth phase was placed to a 96 - well tissue culture plate. Then, 0.1 mL of various concentrations of OLE (0–160 mg/mL) and MA (0-125 µg/ml) as control drug was added to each well and incubated at  26 ± 1°C for 3 days. After this time, supernatants were removed and 0.1 mL of RPMI1640 culture medium lacking phenol red (RPMI-PR-) and FBS that integrated 10 µl MTT (5 mg/mL) was added to each well.

The plates were settled down for 4 h at room temperature in the dark. After remove the supernatants 0.1 mL of dimethyl sulfoxide (DMSO) was added to each well as a solvent of formazan. Promastigotes in the complete medium with no drug considered as a positive control and the complete medium with no promastigotes and drugs as blank. Finally, absorbance was calculated by an ELISA reader at 492 nm. Antipromastigote activity was determined as the 50% inhibitory concentrations (IC50) using linear regression.

Antiamastigote Activity: Effect OLE on amastigotes forms of Leishmania spp was evaluated by moraine macrophage model. To do this, peritoneal macrophages, washed and transferred to glass coverslips inserted in 6-well plates at 5×104 cell/well and allowed to hold for 5 h at 37°C in 5% CO2. Non adherent cells were discarded, and plates were incubated overnight in the complete tissue culture medium.  After 24 h, adherent macrophages were infected with stationary phase promastigotes of L. major and L. tropica at a parasite/macrophage ratio of 10:1 and incubated for 4h at 37 °C in 5% CO2.  Treatment of infected macrophages with extract (0-160 µg/ml) was completed 24h after infection. MA (0-125 µg/ml) was also tested for its antileishmanial efficacy as reference drug. The macrophages containing amastigotes without extract and those with no parasite and extract were considered positive and negative controls, respectively. All the tests were performed in three series. On 24, 48 and 72 h after treatment, coverslips were ﬁxed in methanol and stained with Giemsa 15. The number of infected macrophages and the number of amastigotes per infected macrophage were determined by counting at least 200 macrophages in triplicate cultures. IC50 values of the extract and MA were calculated.

Analysis of Oleuropein Level‎: The level of oleuropein available in the extract was reported as 18.45%. Chromatogram related to the standard oleuropein is shown in Fig. 1. 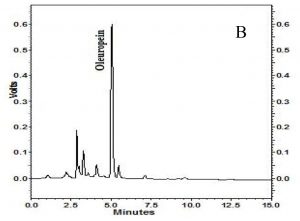 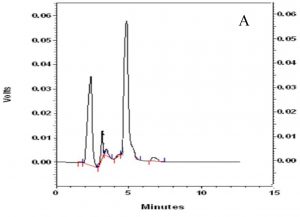 Antipromastigote Effects: The result of present research demonstrated OLE had remarkable antipromastigote activity based on a dose-dependent response (P<0.05).

Results obtained from MTT assay indicated a significant difference between intervention and control group (P <0.001). Overall, the results demonstrated the inhibitory effects of OLE on the L. major and L. tropica promastigotes. IC50 values were shown in Table 1.

TABLE 1: IC50 VALUES OF OLIVE LEAF EXTRACT (OLE) AND MA (MEGLUMINE ANTIMONIATE) AGAINST THE GROWTH RATE OF PROMASTIGOTES AND INTRAMACROPHAGE AMASTIGOTE FORMS OF L. TROPICA AND L. MAJOR. DATA ARE EXPRESSED AS THE MEAN ± SD

DISCUSSION: Nowadays, it has been proven that the majority of human populations trust in herbal medicines for their primary healthcare necessities. Because, plant medicines generally have less significant side effects are considered a suitable substitute for the chemical agents 22. The results of this investigation showed that the mean number of promastigotes for both species in higher concentrations of OLE groups entirely decreased and there was a considerable difference between test and control groups (P<0.05). On the other hand, reduction of optical absorption in MTT assay confirmed this result. As by increasing the time, the number of parasites was decreased.

In addition, OLE extract significantly decreased the mean infection rate compared with the control group (P<0.05). The obtained results of the present study demonstrated that OLE significantly inhibited the mean number of infected macrophages and amastigotes in both species (P<0.05). The results showed that amastigote forms compared with promastigote forms was more vulnerable to OLE. This difference in the vulnerability of two forms could be linked to their biochemical, structural, and morphological factors 16. Sifaoui et al., (2014) have demonstrated the repressive effect of some Tunisian olive species on the promastigote forms of some Leishmania spp with IC50 varing from 2.1 to 71.5 μg/ml 23.

Reviews have shown that the main constituents of OLE are polyphenolic compounds including hydroxytyrosol, tyrosol, and benzoic acids, secoiridoids such as the oleuropein, ﬂavonoids, and triterpenoid including oleanolic acid, maslinic acid, and ursolic acid 10.

Studies showed particular properties of these constituents 22 but, some factors for example geographical source, time of harvesting, and climatic conditions may possibly affect the functional properties of the plants 24 - 26. A number of studies exhibited that polyphenols components basically restrain the growth of amastigote and promastigote forms Leishmania spp 27, 28. On the other hand, flavonoids are as well wide classes of plant phenolics that showed some antiparasitic properties 29.

On the subject of antileishmanial effects of triterpenic acids has been shown in numerous investigations 23, 30. For instance, Torres-Santos et al., (2014) confirmed that oleanolic acid, ursolic acid and triterpenic acids extracted from the Pourouma guianensis demonstrate considerable effects against L. amazonensis 30.

Here we found that level of oleuropein existing in the OLE was 18.45%; this compound is most common phenol constituent in the olive leaves and fruits; whereas a number of pharmacological effects such as antioxidant, anticancer, anti-inflammatory, and antimicrobial have been related to this compound 31. For example, in a study conducted by Kyriazis et al., (2013) it has been proven that Oleuropein showed the effective inhibitory effect on promastigotes forms of some Leishmania spp 32.

Hence, phytoconstituents of OLE mostly oleuropein may possibly be accountable for the antileishmanial activity of this plant although their precise mechanism of ac­tion is indistinguishable. However, previous studies demonstrated that phenolic components for example oleuropein show antimicrobial effects via destruction of the bacterial cell wall and/or disrupting peptidoglycans of cells 33, 34.

CONCLUSION: To conclude, the obtained results demonstrate the scientific facts that herbal medicines could be used for the prevention and treatment of cutaneous leishmaniasis.

ACKNOWLEDGMENT: The authors appreciate vice-chancellor for research and health and Razi Herbal Medicines Research Center, of Lorestan University of Medical Sciences, and also appreciate our co-workers in Center for Research and Training in Skin Disease and Leprosy, Tehran University of Medical Sciences, for their sincere cooperation. Also, we thank all of those people who helped us in this research.

CONFLICT OF INTEREST: The authors declare that there is no conflict of interest in this study.