ABSTRACT: The coriander seedextract in 80% methanol is examined for the polyphenol composition and the antimicrobial potential against pathogenic bacteria Escherichia coli, Pseudomonas aeruginosa, Staphylococcus aureus, and Bacillus pumilus. Gallic acid, caffeic acid, ellagic acid, quercetin and kaempferol are principle polyphenolics identified and quantified in the coriander extract by HPLC. The antimicrobial activity was examined by determining cell damage and measuring cell inhibition zone. The growth inhibition zones observed by agar well diffusion method are 11.93 to 17.27 mm in diameter in presence of coriander extract. Minimum inhibitory concentration of coriander was 4.16 mg/ml for the bacteria tested. Increased release of intracellular nucleotides and proteinaceous materials from the bacterial cells in the presence of methanolic coriander extract suggests that the primary mechanism of action of coriander extract is membrane damage, which leads to cell death. The results obtained herein further encourage the use of coriander in antibacterial formulations due to the fact that polyphenol rich coriander extract could effectively kill pathogenic bacteria related to foodborne diseases.

INTRODUCTION:    Antibiotics are generally an efficient means of treating bacterial infections. Treatment with antibiotics is not only expensive but the risk of bacterial resistance to antimicrobial agents and side effects such as acidity, burning sensation and damage to natural fauna of intestine are also involved. The situation is further worsening as the resistance to pathogens against antibiotics is developing much faster than ever.

Synthetic chemicals with antioxidant and antimicrobial properties are often used as preservative in food processing and storage to inhibit foodborne pathogens and to extend shelf life. However, the safety of these synthetic antioxidants has been doubted due to toxicity, liver damage and carcinogenicity. Consumer awareness and concerns over the potential risks of synthetic food additives to human health have renewed the interests in using naturally occurring alternatives.

The search for natural sources of antimicrobial and antioxidant substances is on great demand. Plants have been used in traditional medicines for several years. Herbs and spices are well known to have antioxidant properties 1 and are being explored for their possible role in food processing, neutra-ceutical and pharmaceutical industry 2, 3.

As a consequence, the market of health and herbal neutraceuticals constantly addresses its attention to the rich plant sources offering functional efficacy.

Coriander (Coriandrum sativum) is an annual herb of the family Apiaceae. The herb is a native of Mediterranean region and is cultivated and used extensively in Russia, Europe, India, Turkey, Argentina and United States of America. The dry fruits, known as coriander or coriandi seeds are used as spice. Coriander seeds are used to cure indigestion, cough, bronchitis, vomiting, diarrhea, dysentery, rheumatism and pain in joints. Coriander is also used as antiedemic, anti-inflammatory, antiseptic, emmenagogue, antidiabetic, antihyper-tensive, lipolytic and myorelaxant and also possesses nerve-soothing property 4.

The spice is also known for its effect on carbohydrate and lipid metabolism 5. The essential oil and various extracts from coriander have been shown to possess antibacterial, anticancerous, antimutagenic, antioxidant and free radical scavenging activities 6. Butanol and ethyl acetate extracts of coriander seeds had polyphenols and exhibited antioxidant properties 7. Methanolic extracts of coriander leaves and stem are reported to have antibacterial activity 8. But the antibacterial properties of the polyphenol rich methanolic coriander seed extract are not reported yet.

The aim of the present study was to;

(i)     Quantitatively analyze the principle polyphenolic compounds in the methanolic coriander extract by HPLC.

(ii)   To study the antimicrobial activity of methanolic extract of coriander seeds against foodborne pathogenic bacteria.

Extraction: Coriander seeds were dried at 60°C in hot air oven till constant weight was attained. Finely powdered coriander seeds were extracted with 80% methanol (1g/10ml) in a shaker at room temperature for 4 hrs. Residue was again extracted with 80% methanol for 2 hrs. Collected extract was filtered through double layered muslin followed by centrifugation at 5000xg for 5min in order to get clear supernatant. Extract was concentrated in a vacuum evaporator and stored at -20°C for further use. The extract was diluted appropriately for different experiments.

Polyphenol analysis of the extract:

RESULTS AND DISCUSSION: Lipid peroxidation plays a crucial role in the development of rancidity, unpleasant tastes and odors as well as changes in color and losses of nutritional value 12. Antioxidants and antimicrobial plant products are used in the food industry to increase the shelf life of the foods. The antioxidant properties of these plant extracts have been mainly attributed to their polyphenolic compounds, which are plant secondary metabolites and have many positive effects on human health, including their anti-inflammatory activity and anti-carcinogenic properties 6-10. Moreover, the activity of these components as food lipid antioxidants is well known 5, 6. Coriander seed extract was therefore, examined for the polyphenol composition and antimicrobial properties to explore its potential advantage as food additive.

The identification of polyphenols was done by comparing retention time of the peaks with that of standard compounds. Coriander seed extract contained gallic acid, caffeic acid, ellagic acid, quercetin and kaempferol (Table 1). Quantification of the identified compounds was achieved by comparing the peak area of individual compound with that of standards (2ng/10µl). Methanolic extract of coriander had 173.656 µg gallic acid, 80.185 µg caffeic acid, 162.861 µg ellagic acid, 608.903 µg quercetin and 233.70 µg kaempferol/g seeds. Extract of fresh coriander leaves and stem is reported to contain caffeic acid, protocatchunic acid, chlorogenic acid, ferulic acid and flavanols such as quercetin 13.

Quercetin, isoquercetin, rutin and their glucuronoid derivatives have been identified from coriander seeds but quantitative analysis of polyphenols from coriander seeds has not been reported 14. Presence of high amount of quercetin and kaempferol, along with other polyphenols indicates that coriander seeds as a whole or extract may maintain a reducing medium when added to the food or pharmaceutical preparation adding to the antibacterial characteristic.

Coriander extract has exhibited antimicrobial activity against all the four bacteria tested. Increase in absorbance between 260 and 280 nm (Fig. 2) in the cultures incubated with extract shows leakage of the intracellular nucleotides and proteinaceous materials from the bacterial cells in the growth media and hence bacterial cell damage. Bacterial growth is also inhibited in the presence of extract (Fig. 3; Table 2). The growth inhibition zone in presence of coriander seed extract (equivalent to 33.33 mg /ml) was 11.93±0.31 mm for E. coli and 17.27 to 16.63 mm for other bacteria tested (Table 2). 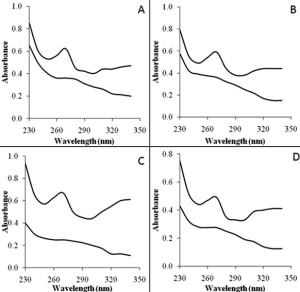 FIG. 2: BACTERIAL CELL DAMAGE IN PRESENCE OF CORIANDER SEED EXTRACT; (A) E. coli; (B) P. aeruginosa; (C) S. aureus; (D) B. pumilus. The lower and upper curve indicate the absorbance of control sample and in the presence of extract respectively 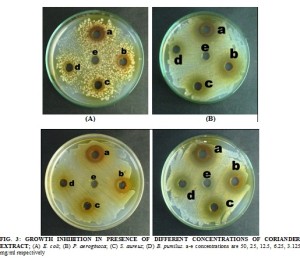 These values are comparable to 18 mm-26 mm with ampicillin (25µg/ml), although same concentration of chloramphenicol was more efficient. Coriander essential oil has been reported to inhibit the growth of a broad spectrum of microorganisms 15, 16. Ethanol and petroleum ether extracts did not exhibit antibacterial properties but water extracts inhibited the growth of bacteria 17. Methanolic extracts of other spices are also known to possess antimicrobial properties 3, 18, 19. The essential oil extracted from coriander inhibits the fungal and bacteria growth in food preparations also 12.  Essential oil extracted from coriander seeds by steam distillation is effective against both gram positive as well as gram negative bacteria although gram positive bacteria exhibit lower susceptibility than gram negative bacteria 16. Results of the present study also indicate that the coriander extract is effective against both types of bacteria. Study on respiratory activity and membrane potential show that primary mechanism of action of coriander oil is membrane damage, which leads to cell death 16. The increased release of biomolecules from the bacterial cells observed here also supports that the membrane damage may be the mechanism of growth inhibition in presence of coriander methanolic extract.

The values represent mean of sample ± SD for n = 3. Diameter of inhibition zone was measured as the clear area centered on the agar well containing the sample. Wells with non-inhibition zone were recorded 0.

The values for coriander are in mg dry wt of seeds/ ml and for standard antibiotics are in µg / ml.

Minimum inhibitory concentration of the coriander seeds is equivalent to 4.16 mg/ml for the bacteria tested as compared to 0.2-0.5 µg/ml for standard antibacterial compounds tested (Table 3).

Water extracts have been reported to inhibit the growth of bacteria with less than 10mg/ml lyophilized coriander extract 17. Voravuthikunchai et al 18 reported the antimicrobial properties of aqueous extracts of 38 medicinal plant species against E. coli with MIC values ranging from 0.09-6.25 mg/ml. However, comparatively higher MIC in the range of 10-25mg /ml has been reported by Das et al 19. MIC of coriander seeds observed here falls somewhere in between the reported extremities supporting the medicinal use of coriander seeds as a whole or as extract. Growth of bacteria is sensitive to the redox potential of the media. Moderately reducing environment of the growth medium can contribute in part to the growth inhibition of various bacteria 8.

Reducing character of the methanolic extract of coriander seeds due to considerably high amount of polyphenols in it may in part explain the inhibition of bacterial growth in presence of phytochemical mixture in the growth medium. Metal ion chelating property of the extract may also be contributing by leading to the deficiency of essential metal ions in the growth medium. However, increased release of intracellular nucleotides and proteinaceous materials from the bacterial cells in the presence of methanolic coriander extract suggest that the primary mechanism of action of coriander extract is membrane damage, which leads to cell death.

CONCLUSIONS: The present study reveals that coriander seed is a rich source of natural antibacterial principle which can be extracted efficiently with methanol. Polyphenolic compounds of the methanol extract of coriander seeds include gallic acid, caffeic acid, ellagic acid, quercetin and kaempferol. Coriander seed extract can induce bacterial cell damage and inhibit the growth of both gram positive and gram negative bacteria. Role of coriander seeds as antibacterial agent grants itself good potential to be applied in the food and pharmaceutical industry. Potential use of coriander as a polyphenol rich neutraceutical and as food preservative needs to be explored further.