ABSTRACT: Snakebite is an important cause of morbidity and mortality and is one of the major health problems in India. Russell’s viper (Daboia russelli) appears to be the commonest cause of fatal snakebite in many Asian countries and especially in the Indian subcontinent. Intravenous administration of anti venom serum neutralizes the systemic actions, but it is of little effect on the reversal of local symptoms and often induces adverse reactions, a context that drives the search for complementary treatments for snakebite accidents. Plant extracts with a range of antiophidian activities constitute an excellent alternative. The methanolic extracts of seeds of Pongamia pinnata, fruits of Piper longum and Sapindus laurifolius and leaves of Adhatoda zeylanica were tested for the snake venom neutralizing capacity using in vitro methods. The venom of Daboia russelii (Russell’s viper) was used to evaluate the antivenom activity of these extracts individually and in combinations. The parameters assessed were the neutralization of procoagulant activity, proteolytic activity and phospholipase A2 activity. All the extracts studied exhibited significant activity in neutralizing the venom effects and among the four extracts tested Pongamia pinnata showed superior activity followed by Piper longum. The present study suggests the effectiveness of the above extracts in the treatment of snake bite and also supports the use of herbal extracts by tribal and Vaidya’s

INTRODUCTION: Snake bite is a major socio-medical problem of tropical countries, especially in India. 20,000 deaths per year have been reported in India (Swaroop & Grab, 1954). Snake bite is a global problem especially in tropical countries like India. It is estimated that deaths due to snake bite in the Indian subcontinent is more than 25000 every year. There are about fifty varieties of venomous snakes found in India, among which most of the deaths are attributed to the commonest species like, Viper, Cobra & Krait.

Russell’s viper is the common snake found in India and a large number of deaths occur due to envenomation by this snake. The most effective and accepted therapy for snake bite is the immediate administration of anti venom. However this therapy carries an associated risk of mediated cell lysis, anaphylactic shock and serum reactions. Also its development in animal is time consuming, expensive and requires ideal storage condition. In this context, many attempts have been made over the years for the development of snake venom antagonists from plant sources. Many Indian medicinal plants are recommended for the treatment of snake bite. The present study investigates the venom antagonizing activity of four plants that are stated in ancient medicinal folklore used for the treatment of snake bite. 2, 3, 4, 10, 11

Freeze dried Russell’s viper venom was obtained from Haffkine Institute, Parel, Mumbai and was preserved at -200C for further use 1(Fig. 1). Seeds of Pongamia pinnata, fruits of Piper lomgum and Sapindus laurifolius was purchased from a local Ayurvedic shop at lalbaug, Parel. Leaves of Adhatoda zeylanica was collected from garden of Haffkine institute.2, 3, 4, 5, 7, 8, 9 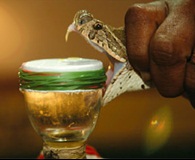 The plant material was shade dried for 7 to 8 days and then powdered in a mixer grinder. The extracts were prepared by soxhlet extraction method using methanol as the extraction solvent 3, 5. The Methanolic extracts were concentrated by keeping them at room temperature to allow the solvent to evaporate. After complete evaporation of solvent the yield (grams) of the extract was measured 6, 7, 8, 12. Before use it was dissolved in distilled water to prepare a stock of 500 mg/ml. (Fig. 2 to 5)

The Methanolic extracts obtained by soxhlet extraction were subjected to phytochemical screening for its constituents by standard methods.11, 12

The assay for procoagulant activity was performed according to the method described by Theakston and Reid, various concentrations of venom (100µl) were added to 200μl of human citrated plasma at 370C 18, 19. Coagulation time was recorded and the minimum coagulant dose (MCD) was determined as the venom concentration which induced clotting of plasma within 60 seconds. Plasma incubated with PBS alone served as the control. In neutralization assays, constant amount of venom was mixed with various dilutions of plant extracts in 1:1 ratio. The mixtures were incubated for 30mins at 370C. Then 100µl of the mixture was added to 200μl of human citrated plasma and the clotting timed recorded. In control tubes, plasma was incubated with either venom or plant extracts alone. Neutralization was expressed as effective dose (ED), defined as the concentration of plant extract at which clotting time increased three times when compared with clotting time of plasma incubated with MCD dose alone 15, 20.

Different concentrations of agar and casein were tried out on a trial error basis, and it was decided that the agar concentration to be used was to be 2.5% and that of casein was 1%. For standardization experiments, 9mm wells were punched in the ‘casein agar’ plates and different concentrations Russell’s viper venom (50 µl) were loaded into them. The plates were then kept for an overnight incubation at 37oC. Zone diameters were checked and the one which showed a constant gradation with time was selected for the test experiments.

In test experiments, constant amounts of venom (which was selected from the standardized experiment) were mixed with different concentrations of plant extracts in 1: 1 ratio and the mixtures were incubated for an hour before loading them into the wells in the agar plates. They were then kept for overnight incubation at 37oC. Positive controls for both venom and plant extracts were used. After incubation, all the plates were seeded with 5% Trichloroacetic acid and the resulting zones were visualized after 10 minutes and measured. The effective plant dose which reduced the diameter of the precipitation zone by 50% as compared to diameter of zone induced by the dose of venom alone was selected. The recorded data was statistically analysed using ‘one tailed T-Test. 21, 22

The CC50 values of the plant extracts are tabulated in Table 2.

Inhibition of Phospholipase A2 activity

Phospholipase A2 activity was measures using an indirect hemolytic assay on agarose-erythrocyte-egg yolk gel plate by the method described by Alvarado et al. (1988). Increasing doses of Daboia russelii venom (30µl) were added to 8mm wells in agarose gels (0.8% in PBS, pH 8.1) containing 1.2 % egg yolk as a source of lecithin and 10 mM CaCl2. Plates were incubated at 37oC overnight and the diameters of the haemolytic halos were measured. 9, 11, 15 Control wells contained 30 µl of saline. The minimum indirect haemolytic dose (MIHD) corresponds to a dosage of venom which produced a haemolytic halo of 11 mm diameter. The efficacy of antivenom (plant extracts) in neutralizing the phospholipase activity was determined by mixing constant amount of venom (ug) with various amount of plant extracts and incubated for 30 minutes at 37oC. Then aliquots of 30 µl of the mixture were added to wells in agarose-egg yolk human erythrocyte gels. Controlled samples contained venom without plant extracts. Plates were incubated at 37oC for 20 hours. The effective plant dose which could reduce the diameter of haemolytic halo by 50% when compared to the diameter of haemolytic halo induced by venom alone, was selected. The recorded data was statistically analysed using ‘one tailed T-Test. 12, 24, 26

RESULTS AND DISCUSSION: Deaths following snakebite are common problem throughout the world especially in India. The only available treatment for this is the use of snake venom antiserum, despite several side effects. Therefore, more scientific attention has been given since last 20 years to find a safer alternative to antiserum therapy. The use of plants for the treatment of snakebite has long been recognized and many Indian plants have been recommended for this purpose out of which few have been examined for the neutralization of venom.

In the present study, we evaluated the potential of methanolic extracts of Ponagamia pinnat, Piper longum, Sapindus laurifolius, Adhatoda zeylanica and their combinations in neutralizing the procoagulant, proteolytic and hemolytic activities of Russell’s viper venom in vitro. 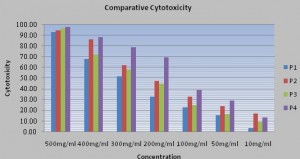 The minimum coagulant dose of Russell’s viper venom was determined by testing increasing concentrations of venom (10-1000µg) to find the concentration that effected the clotting of human citrated plasma in 60 seconds. The activity of plant extracts in neutralizing this effect was assessed by observing the absence of clotting in 60 seconds when various doses were incubated with a fixed dose of venom. All the plant extracts used in the study showed good inhibition of procoagulant activity. The Effective Dose (ED) values of the plant extracts are mentioned in Table 3.

Inhibition of phospholipase A2 activity:

Phospholipase activity was measured using indirect hemolytic assay on agarose-erythrocytes-egg yolk gel plate. Minimum indirect hemolytic dose was determined by applying increasing doses (10-1000µg) of venom in the wells made in the agarose-gels. 200µg of Russell’s viper venom produced 11.2 mm hemolytic halo. This shows that Russell’s viper venom has phospholipase A2 enzyme which has the ability to cause lysis of human RBC's. The various plant extracts tested have shown good inhibition of this enzyme activity in a dose dependant manner. The ED values of the plant extracts are mentioned in Table 5.

TABLE 5: INHIBITION OF PHOSPHOLIPASE A2 ACTIVITY

All these plant extracts showed significant potential in inhibiting the venom induced activities in plasma and blood. This experimental work also successfully proved the effectiveness of combination therapy or polyhedral formulation, the area which is not yet extensively ventured, but has been an old practice of ayurvedic medicine. Some plant extracts showing significant anti venom potential, when mixed with other extracts in suitable proportion displayed increased anti venom activity. These combinations have the potential to be formulated as effective drugs against envenomation after assessing its neutralization effect in pre-clinical and clinical studies. The so-called ‘secondary metabolites’ which are present in plants can be held responsible for the neutralizing effect of plants against the action of snake venoms, in popular use. Pongamia pinnata was found to be most effective against all tested pharmacological activities of Daboiarusselii venom followed by Piper longum. The plants showed anti venom potential at concentrations below the CC50 value of respective plants. It is noteworthy that these studies were performed using the crude extracts and thus an increase in the extent of activity can be expected with the use of highly purified extracts or isolated constituents.

CONCLUSION: Results of the present study conducted on the few important in vitro activities of venom reveal the presence of antivenom principles in the methanolic extracts of Pongamia pinnata, Piper longum, Sapindus laurifolius and Adhatoda zeylanica. The efficacy of these extracts also justifies the traditional use of herbal extracts in the treatment of snake bite. However, further research including the isolation of antivenom compounds and in vivo assays is needed to establish these plants as a remedy for snakebite.