Categories Menu
Home » 1, 3, 4-OXADIAZOLE AND ITS POTENCY: A REVIEW

ABSTRACT: Heterocyclic compounds represent the important structural key in pharmaceutical medicinal chemistry. In literature, five-membered heterocycles are reported to be a core moiety of various pharmaceutical drugs. Oxadiazole or furadiazole is a five-membered heterocyclic nucleus and is considered to be derived from furan by replacement of two methane (-CH=) groups by pyridine type nitrogen. Oxadiazole is a versatile lead compound for designing potent bioactive agents. 1, 3, 4-oxadiazole having verities of potential biological activities can be synthesized by various methods. Hence, nowadays, researchers have developed innovative methods for the synthesis of 1, 3, 4-oxadiazole derivatives and their medicinal applications. The activities include anticancer, antimicrobial, anti-inflammatory, anti-HIV, anti-tubercular, anti-diabetic, antifungal, etc. In this review article, we have summarized various methods for synthesis of derivatives of 1, 3, 4 – oxadiazole nucleus and evaluation of various biological activities. The information in the present article may be useful to many researchers, which leads to the exploration of new therapeutic species for society.

The five-membered oxadiazole nucleus present in heterocyclic compounds is majorly responsible for the diversified useful biological effects. When two methine (-CH=) groups present in the furan ring are replaced by two pyridine type nitrogen (-N=) then oxadiazole is derived with the general formula of C2H2ON2, this reduces the aromaticity of the ring (oxadiazole) to some extent that they now reflect the characteristics of a conjugated diene. The electrophilic substitution reactions are not possible in oxadiazole because of the low density of electrons on the carbon atom, which causes the electron withdrawal effect of pyridine type nitrogen when any electron releasing group was added to it.

The oxadiazole ring is found to be resistant to nucleophilic substitutions. Whereas the halogen-substituted oxadiazole can undergo these sub-stitutions by replacing halogen atom by nucleo-philes. Four isomers of oxadiazole are present.

1,2,4-oxadiazole, 1,2,5-oxadiazole, and 1,3,4-oxadiazole are known, but the 1,2,3-isomer is quite unstable and reverts in the form of diazoketone tautomer. The stable oxadiazoles appear in a many pharmaceutical drugs which include raltegravir, fasiplon, butalamine, oxolamine, pleconaril and Nesapidil. Oxadiazole have occupied a unique place in the field of medicinal chemistry due to its wide range of activities like antimicrobial, anti-inflammatory, anti-fungal, antitubercular, anti-convulsant, anthelmintic, herbicidal, antioxidant, analgesic, anti-tumour, and anti-hepatitis B viral activities.

Biological Activities: It is an important, challenging task for medicinal chemists to develop new anti-microbial, anti-inflammatory, analgesic, antitumor, anti-convulsant, anthelmintic, herbi-cidal, antimycobacterial and anti-oxidant agents. There are two basic approaches for the development of new drugs:

(b) Searching and synthesis of novel compounds, that the bacteria and diseases has never been presented before. For this purpose, substituted 1, 3, 4-oxadiazoles are already being used as potent anti-microbial, anti-inflammatory, analgesic, anti-tumor and anti-convulsant, documented as well as patented.

Analgesic and Anti-inflammatory Activity: The novel mercapto substituted 1, 3, 4-oxadiazole bears good anti-inflammatory activity and if secondary amines are added to this scaffold, then the activity increases 1. 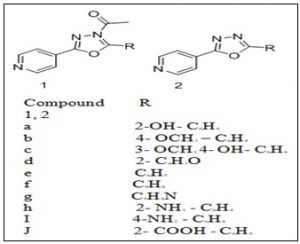 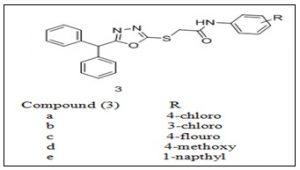 Singh AK, et al., (2013) have synthesized a series of 1, 3, 4- oxadiazole derivatives and evaluated for anti-inflammatory activity 4.

Antimicrobial Activity: Researches on 1, 3, 4-oxadiazole and their derivatives have shown that they have very prominent anti-microbial activity against a wide range of microbes. 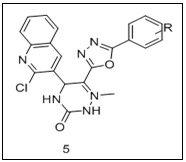 Mudasir R. Banday et al., (2010) synthesized 5-(alkenyl)- 2amino-1,3,4-oxadiazoles 6a-d and 2-(alkenyl)-5-phenyl-1,3,4oxadiazole 7a-d, newly synthesized compounds were investigated for their anti-bacterial and anti-fungal activities against Gram-negative bacteria Escherchia coli and Salmonella typhimurium and Gram-positive bacteria Staphylococcus aureus and Bacillus subtilis. The investigation of the antimicrobial activity of compounds 7a–d and 8a–d revealed that all the synthesized compounds showed moderate to good antibacterial activity against E. coli. Compound 7d was active against all the bacteria whereas 8c was active against E. coli, S. typhimurium and B. subtilis. Compounds 8a, 8c and 8d also showed promising results against E. coli 7. 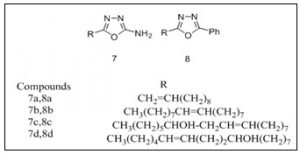 Anti-cancer Activity: Polothi and his research team members in the year (2019) designed and synthesized new hybrids containing the 1, 3, 4-oxadiazole with 1,2,4- oxadiazolering systems. The synthesized compounds were confirmed by 1H NMR, 13CNMR and mass spectroscopic techniques 9. 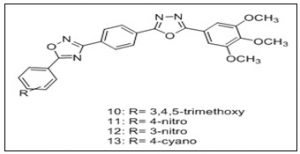 Farshid and co-workers (2019) reported a multi-step reaction procedure for the synthesis of some quinazolinone-1,3,4-oxadiazole derivatives. Numbers of quinazolinone-5-(4- chlorophenyl)-1, 3, 4-oxa-diazole conjugates were synthesized by the reaction of the 3-amino-4(3H) quinazolinone derivatives with 5-(4-chlorophenyl)-1, 3, 4-oxadiazole-2-thiol followed with some intermediary steps in dry acetone and potassium carbonates. Compound 2-(5-(4-chlorophenyl)- 1, 3, 4-oxadiazol-2-ylthio) N-(4-oxo-2-propylquinazolin)3(4H) acatamide showed the highest cytotoxicity with IC50 value of 7.52 μM against the HeLa cell line 10. 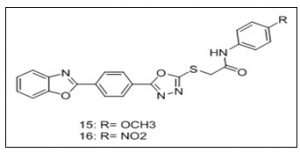 Antitubercular Activity: Armakovic and co-workers (2018) reported molecules containing 1, 3, 4-oxadiazole moiety attached to a pyrazine ring. The molecule with unsubstituted phenyl ring (19a) and the one with furan ring (19b) displayed activity of 1.6 µg/ml, while the most active molecules of the series, 19c, 19d and 19e displayed inhibitory activity of 0.8 µg/ml, which was 4 times more active than the reference, pyrazinamide 14-16.

Gholap et al., (2018) combined 1, 3, 4-oxadiazole with trifluoromethylphenyl and benzofuranylamide moieties and tested these compounds for their antimycobacterial potential. These compounds exhibited MIC values in the range of 2-24 µg/ml with the most active compound, displaying an IC90 of 5.7 µM against dormant Mtb H37Ra. The compounds were observed to be non-toxic to host cells when tested against the cell lines THP-1, A549 and PANC-1 17.

Sajja et al., (2017) developed a series of molecules which were composed by fusion of a pyridine-oxadiazole moiety with a benzocycloheptane ring system. This design was conceived by replacing the pyridine ring of isoniazid with benzo 6, 7 cyclohepta [1,2-b]pyridine and replacing the hydrazide fragment with oxadiazole. Molecule 21 displayed the highest inhibitory activity of 1.56 µg/ml. The presence of methoxy group/s on phenyl ring attached to the oxadiazole moiety was found to be crucial for antituberculosis activity 18.

Sapariya et al., (2017) Synthesized of 7-substituted tetrazolo [1,5-a] quinolines incorporating 1,3,4-oxadiazole nucleus. The in-vitro antituberculosis activity was carried out at 100 μg/ml concentration, molecules 22a and 22b displayed more than 90% inhibition at this concentration 19.

Karad et al., (2016) explored the biological applications of fluoro substituted pyrazole nucleus clubbed with 1, 3, 4-oxadiazole scaffolds, antituberculosis activity being one of the important potential applications. The molecules were designed by making the hybridization of pyrazole and 1,3,4-oxadiazole moieties. Antituberculosis screening of all the synthesized molecules was conducted, and four molecules, 23a-23d, were found to display more than 90% inhibition at 250 µg/ml 20. 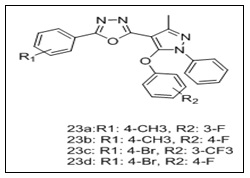 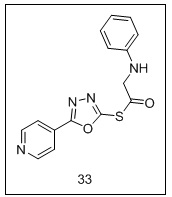 Lole et al., (2016) synthesized novel 1, 3, 4-oxadiazole derivatives and evaluated their antibacterial activity against E. coli and S. aureus. Streptomycin, as in previous research, was used as reference compound. The compounds 34 and 35 showed moderate activity against E. coli (ZOI = 12 mm, streptomycin ZOI = 15 mm). Compound 35 displayed good activity against S. aureus (ZOI = 12 mm), while streptomycin showed zone of inhibition growth (ZOI = 13 mm). The activity of these compounds was enhanced due to the substitution of electron-withdrawing groups NO2 and chlorine atom at para position in the phenyl ring 28. 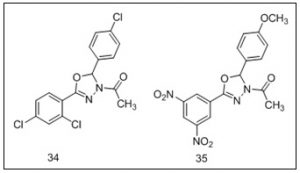 CONFLICTS OF INTEREST: The authors declare no competing financial interest.