The human oral cavity is a complex biological system in which members of a microbial community interact with themselves as well as with different host structures and components Neisseria sp., Haemophilus influenzae  and Campylobacter jejuni cause periodontitis . The pathogenesis of this dental infection is a multi factorial process that results in a serious degenerative disease of the periodontium. Researches have resulted in the identification of important virulence factors. These researches have provided a narrow picture of the steps of this complex process. In contrast, a wider picture could be abstained with the application of tools such as bioinformatics and proteomics. These tools provide factors and process leading to the pathogenesis and treatment. In the present study Ferric binding protein is taken as a case study molecule to understand high reactive responses of various drugs administered for the oral periodontitis. The drugs are being compared with the Fbp. The Fbp interacted with doxycycline, flurbiprofen and chlorhexidine using docking methods.

INTRODUCTION: In oral cavity of human beings, periodontal diseases are of common occurrence. Periodontitis is the inflammatory condition of the supporting tissues of the teeth caused by bacteria. The periodontal microbiota is a complex community of microorganisms. They function as multiple pathogens in the affected site.

The examination of the sub gingival microflora indicates the occurrence of Porphyromonas gingivalis, Bacteriodes forsynthus, Fusobacterium nucleatum, Actionobacillus actinomycetemocomitans, Neisseria meningitides, Neisseria sp., Haemophilus influenzae and Campylobacter jejuni. Periodontal disease, caused mainly by bacteria, is characterized by inflammation, bacteremia, a strong immune response and loss of connective tissue attachment and bone. Periodontal disease is an infection of the supporting structures of the teeth. The oral diseases are treated with antibiotics and antitherapeutics by the oral physicians.

Even though, many antibiotics are administered, the nature of the response is different .To identify the suitable drugs against the pathogenic microorganisms, insilico analysis is carried out in the recent past. In the present study, Neisseria sp., Haemophilus influenzae, Campylobacter jejuni have been selected for the insilico analysis to assess the suitable drug for the disease called Periodontitis.

In the present study Ferric binding protein (Fbp) molecule is taken as a case study molecule to understand high reactive responses of various drugs administered for the oral periodontitis. The drugs are being compared with the Fbp. The Fbp interacted with doxycycline, flurbiprofen and chlorhexidine using docking methods. The present application of computational biology and bioinformatics has the potential, not only of speeding up the drug discovery process but also of changing the way drugs are design.

MATERIALS AND METHODS: Among the various oral pathogenic bacteria Neisseria sp., Haemophilus influenzae andCampylobacter jejuni were selected for the study: In the above organisms, pathogenic protein, causing periodontitis, such as Ferric binding proteins (Fbp) was selected for the present docking study for finding the best drug to be administered for the periodontal disease. For the present protein-ligand docking the following drugs were identified to act as ligands: Chlorhexidine, Doxycycline and Flurbiprofen.

The PDB (Protein Data Bank) is the single world wide archive of Structural data of Biological macromolecules, established in Brookhaven National Laboratories (BNL) in 1971 6. It contains Structural information of the macromolecules determined by X-ray crystallographic, NMR methods etc. http:// www.ncbi. lm.nih. gov / PubMed. These specialized databases are funded by the National Institute of Dental and Craniofacial Research (NIDCR) within the National Institutes of Health, Bethesda Maryland.

(http://www.oralgen.lanl.gov/). The Protein Data Bank (PDB) is a repository for the 3-D structural data of large biological molecules, such as proteins and nucleic acids. The data, typically obtained by X-ray crystallography or NMR spectroscopy and submitted by biologists and biochemists from around the world, can be accessed at no charge on the internet. The PDB is overseen by an organization called the Worldwide Protein Data Bank, wwPDB. The retrieved structure of Fbp was analyzed by using RasMol.

RASMOL [Raster Display of Molecules] is a molecular graphics program intended for the structural visualization of proteins, The DrugBank database is a unique bioinformatics and cheminformatics resource that combines detailed drug (i.e. chemical, pharmacological and pharmaceutical) data with comprehensive drug target (i.e. sequence, structure, and pathway) information. Hex is an interactive protein docking and molecular superposition program, written by Dave Ritchie Molecular docking is a study of how two or more molecular structures, for example drug and enzyme or receptor of protein, fit together Molecular docking softwares are mainly used in drug research industry. The most interesting case is the protein-ligand interaction, because of its applications in medicine.

Ligand is a small molecule, which interacts with protein's binding sites. The Protein-Ligand interaction plays a significant role in structural based drug designing. In our research work we have taken the FBP receptor and the commercially available drugs against Periodontitis. The receptor was docked to the above said drugs and the energy value obtained .using the HEX docking software.

RESULTS: The three organisms Neisseria sp., Haemophilus influenzae, Campylobacter jejuni caused periodontitis, a disease encompassing a large of inflammatory and destructive conditions of the tissue surrounding the teeth. These bacteria after colonizing around the teeth in the gingival crevice , tissue damage has taken place by a combination of direct action of toxic bacterial products that include endotoxins and hydrolytic enzymes. One of the many enzymic proteins, produced by the pathogenic bacteria, was the ion binding protein called ferric binding protein (Fbp). The Fbp molecules of Neisseria sp., H.  influenza and C.  jejuni were more or less structurally oval in shape formed by 309 amino acids of various kinds.

Enzymes play an important role in disease making. Enzymes are the functional proteins, which is controlled by small molecules called ligands. These small molecules act as switches to turn on or off of the protein to function. The Protein-Ligand interactions play a significant role in the identification of suitable drugs for suitable disease to the pathogens. Computational biology and bioinformatics have the potential not only for speeding up the drug discovery process, but also of changing the way drugs are designed. It involves variety of methods to identify novel compounds.

One such method is docking of the drug molecule with receptor in the protein. Docking in process by which two molecules fit together in 3D space. To perform docking software packages of various kinds have been used. One such software packaged is here.  In this investigation Hex is used for docking of drug molecules with the receptor molecules of Fbp. Molecular docking is like a “lock-and-key”, where one is interested in finding the correct relative orientation of the “key” which will open up the “lock”. In the present study the protein Fbp is the lock and the ligand (Drugs) is the key.

The ligand molecule is the smaller one. In this study the drug molecules are the ligands. In the docking process the Fbp molecule is larger size while the ligand drug molecule is very smaller (Fig. 1, Table 1). The focus of molecular docking is to computationally simulate the molecular recognition process. The aim of molecular docking is to achieve an optimized conformation for both the protein and ligand and relative orientation between protein and ligand such that the free energy of the overall system is minimized.

Docking results tabulated between the Fbp of Neisseria sp,. Haemophilus influenzae and Campylobacter jejuni with the drugs. Initially the Fbp receptor of Neisseria sp., was docked with the drug molecule, chlorhexidine. The e-value obtained was -212.49. Then the same Fbp molecule was docked with doxycycline and then with the flurbiprofen molecule; the e-value obtained out of docking was -215.33 and -172.50 respectively. Among the three above energy values given, the drug doxycycline showed better energy value than that of other two drugs. 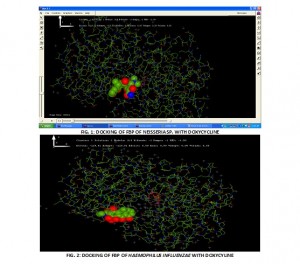 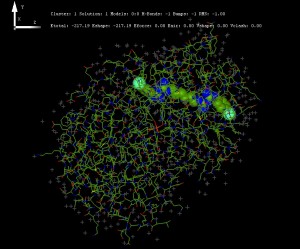 FIG. 3: DOCKING OF FBP OF CAMPYLOBACTER JEJUNI WITH CHLORHEXIDINE

DISCUSSION: Bioinformatics is seen as an emerging field with the potential to significantly improve how drugs are found, brought to the clinical trials and eventually released to the marketplace. Fbp is used by pathogenic bacteria to absorb iron from the host environment. This pathogen relies upon siderophore-independent iron acquisition from host proteins for its survival. FBP binds iron with extremely high affinity (Kirby et al., 2004).

The associations between biologically relevant molecules such as proteins, nucleic acids, carbohydrates and lipids play a central role in signal transduction. Docking is frequently used to predict the binding orientation of small molecule drug candidates to their protein targets in order to in turn predict the affinity and activity of the small molecule. Docking plays an important role in the rational design of drugs. Therefore   the molecular docking is biologically and pharmaceutically gain significance. A binding interaction between a small molecule ligand and an enzyme protein may result in activation or inhibition of the enzyme (Adhikari et al., 1995).

Docking is most commonly used in the field of drug design. Most drugs are small organic molecules, and docking is possible with these molecules. In the present study, docking analysis of Chlorhexidine, Doxycycline and Flurbiprofen was carried by HEX Docking software.

The molecules binding to a receptor, inhibit its function, and thus act as drug. The collection of Chlorhexidine, Doxycycline and Flurbiprofen   and Fbp receptor complexes was identified via docking and their relative stabilities were evaluated using molecular dynamics and their binding affinities, using free energy simulations. Docking results are tabulated (Table 2). Based on the literature it has been shown clearly that the drugs have been used to target receptor Fbp and Chlorhexidine, Doxycycline and Flurbiprofen   on docking and showed energy value of -215.33, -229.81 and -217.19 respectively.

It was observed using RasMol that the results indicated same number of aminoacids ie 309 in all the three kinds of Fbp molecules. However , in the the total number of atoms, Heteroatoms, H-bonds, sheets, number of helices and Non protein atoms , the three molecules showed variations. The energy values were calculated using Hex.  In this way the pharmacophoric part of the drug was partially identified.

SUMMARY: The Fbp is the pathogenic protein formed in Neisseria sp., Haemophilus influenzae and campylobacter jejuni during pathogenesis. Each Fbp is formed by 309 amino acid molecules. Even though the number of amino acids is similar in all the three Fbps, they differ from one another in their amino acid sequence.The ligands selected for molecular docking were Chlorhexidine, Doxycycline and Flurbiprofen. Molecular docking was carried out between Fbp and with each drug. The docking results were represented by e-values. Based on the e-value, Doxycycline was identified against Neisseria sp., and Haemophilus influenzae, and on the other hand Chlorhexidine was identified as suitable drugs for Campylobacter jejuni.