ABSTRACT:One of the most fascinating branches of pharmaceutical field is the chemistry of heterocyclic molecules. Heterocyclic compounds are widely distributed in nature and have biological and industrial significance. Already most of the drugs available in the market are heterocyclic in nature. Cyanopyridine, a structural motif is a cause of concern for biologist and chemist in last twenty years. Specifically 2-amino-3-cyanopyridine scaffolds demand importance due to their diverse biological activity like antiviral, antibacterial, and fungicidal activities, novel IKK-β inhibitors, A2A adenosine receptor antagonists, potent inhibitor of HIV-1 integrase. Due to high reactivity of this scaffold, it has been found as reactive chemical intermediates in organic synthesis like, commercial production of nicotinamide, and pharmaceuticals such as Ridogrel and Pirenzepine. In this short review we have focused on the recent development in synthesis of 2-amino-3-cyanopyridine derivatives and all possible pharmacology reported for this compound. This review may helpful for medicinal chemist in research regarding 2-amino-3-cyanopyridine in future

INTRODUCTION: Molecules containing pyridine always have grave importance in chemistry as well as in biology. The pyridine substructure is one of the most prevalent heterocyclic molecular frameworks found in natural products, pharmaceuticals, vitamins and functional materials 1–4.

The pyridine ring systems have emerged as integral backbones of over 7000 existing drugs 5, 6.

A complete review on this compound is hard to find, that’s why we have tried to accumulate all the synthetic work, and biological evaluation regarding this compound up to present time which will be useful to find a new lead compound in the pharmaceutical arena and may also useful to the chemist.

White to tan crystals or lumps having characteristic odour, and easily soluble in water and gives a clear solution at around 40oC. Melting range is 48-50oC. Due to the presence of lone pair, it has the ability to form significant additive complexes. X-Ray crystallographic studies have shown that it has two isomers. Both isomers are planar in nature, with the characteristic deformation of the aromatic ring due to the presence of lone pair and the ideal symmetrical hexagon form, especially around the pyridine nitrogen atom. The internal angles C – N – C are significantly smaller than 120o and two angles N – C – C within the rings are greater than 120o 32.

Synthesis of 2-amino-3-cyanopyridine: Various preparation methods of 2-amino-3-carbonitrile have been reported. The common method used in the preparation of 2-amino-3-cyanopyridine is the condensation of chalcone or carbonyl compound with malononitrile and ammonium acetate by conventional heating up-to 5 to 6 hours in the presence of ethyl alcohol as a solvent. The same method was repeated by using microwave irradiation 14, ultrasound irradiation 15, 16. To enhance the yield, lowering the reaction time, hexadecyldimethyl benzyl ammonium bromide 17, triethylamine 17, 18, DMF 19 and acetic acid 20 are also used as Catalyst or solvent. These reported methods suffered from severaldrawbacks like prolonged reaction times, low yields, harsh reaction conditions, critical isolation procedures, and expensive catalysts.

In recent years few synthetic methods were published which overcomes the drawbacks of the conventional methods.

Method (B) 22: Four-component condensation of benzaldehyde, acetophenone, malononitrile, and ammonium acetate in trifluoroethanol at refluxing temperature for 6 h results in the formation of 2-amino-3-cyanopyridine.

SCHEME 1:  SYNTHESIS OF 2-AMINO-3-CYANOPYRIDINE FROM CHALCONES

Method (C) 23: The one-pot reaction of synthesis of 2-amino-3-carbonitrile was done by taking a mixture of benzaldehyde, acetophenone, malononitrile, ammonium acetate, and of Yb(PFO)3, in ethanol  at refluxing temperature for 12 h yielded the crude product in 92%.

Pharmacology of 2-amino-3-cyanopyridine: Heteroaromatic rings containing nitrogen atoms often play important roles as the scaffolds of bioactive substances. The pyridine ring system is one of the most popular N-heteroaromatics incorporated into the structure of many pharmaceuticals.

Antimicrobial activity 26: Vyas et al reported the synthesis of some new cyanopyridine derivatives and their screening against M. tuberculosis and other microorganism. Anti-tubercular data was compared to the rifampin. Antimicrobial activities of the compounds were compared with norfloxacin, griseofulvin, benzyl penicillin, amoxicillin and ampicillin against various bacterial strain, Bacillus subtillis, Bacillus megaterium, E. coli, Proteus Vulgaris, and Aspergillus niger. 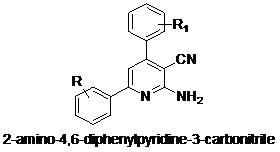 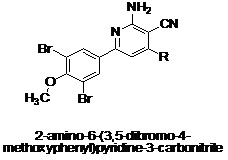 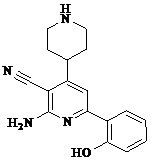 Other activity: 2-amino-3- cyanopyridine derivatives are known to have multiple biological activities, such   cardiotonic 27, antiparkinsonism 10, aurora a kinase inhibitor 28, Herbicidal 29 and anti-tumor properties 30 and potent inhibitor of HIV-1 integrase 11. 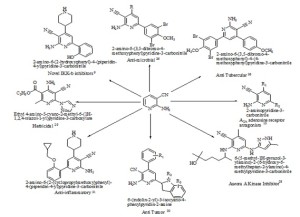 ACKNOWLEDGEMENT: The authors are thankful to Department of Pharmacy, Tripura University for providing e – resources.