ABSTRACT: 3D-QSAR models of Comparative of Molecular Field Analysis (CoMFA) and Comparative of Molecular Similarity Indices Analysis (CoMSIA) of 44 potent p56lck inhibitors were performed. The conventional ligand-based 3D-QSAR studies were performed for a series of Benzothiazole derivatives as p56lck inhibitors. The model gave q2 values of 0.710 and 0.642, r2 values of 0.966 and 0.956 for CoMFA and CoMSIA, respectively. The predictive ability of the models was validated using the external test set of 10 compounds that were not included in the training set of 34 molecules. These results provided better understanding of the relationship between the structural features of p56lck inhibitors and its activities, which should be applicable to design and find new potential p56lck inhibitors

Benzothiazoles are a group of xenobiotic compounds which contains a benzene ring fused with a thiazole ring. The benzothiazoles are manufactured worldwide for a variety of applications. 4 Benzothiazoles are used as fungicides leather production, 5 as an antialgal agents, 6 and also used as chemotherapeutic agents. 7 These applications indicate that Benzothiazole derivatives have a wide spectrum of biological activity. Benzothiazole molecules has been the primary rubber-related chemical found in synthetic grass. Benzothiazole exerts acute toxicity and is a respiratory irritant and skin sensitizer. Genetic toxicity assay shows benzothiazole was positive in Salmonella in the presence of metabolic activation. Benzothiazole metabolism involves ring-opening and formation of aromatic hydroxylamines, metabolites with mutagenic and carcinogenic potential.8

CoMFA is usually employed to increase the binding affinity.12 When used in a comparative investigation on the same series of compounds acting on multiple targets, such methodology is valuable in identifying the structural basis of the observed quantitative differences in the pharmaco toxicological properties. We developed the 3D QSAR CoMFA and CoMSIA models on p56lck inhibitors in the expectation of getting a model that would account for the quantitative differences in biological activity seen in this series and to capitalize upon the insights to design ligands with pronounced inhibitory potency and selectivity.

The biological activity data reported as IC50 for inhibition of P56lck (ref) by the benzothiazole derivatives as potential p56lck agents was used for the present study. Structures of all the 44 Benzothiazole derivatives are given in table 1. Biological activities were reported in IC50 values were then converted into the corresponding pIC50 using the formula pIC50=-logIC50. 13 The logarithmic transformation helps to obtain a symmetrically distributed data which is apt for the PLS regression analysis and it is important because log-dose response curve is linear about its middle region. 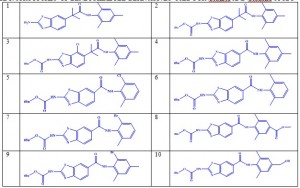 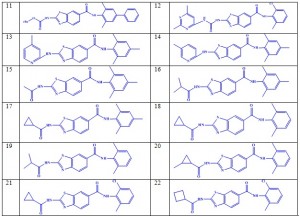 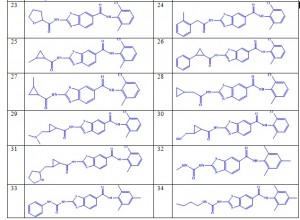 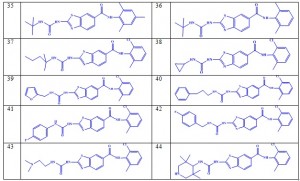 Alignment plays very important role in 3D QSAR studies. One of the important assumptions wherein 3D-QSAR studies are based on that a geometric parallelism should exist between the modeled structures and that of the bioactive conformation of the molecule. It indicates spatial alignment of compounds under study as one of the most sensitive and determining factors in obtaining robustness and meaningful models 16. In the present study the MOPAC geometry optimized structures were aligned on the template by the routine ALIGN DATABASE command in SYBYL employing the divide and conquer strategy 17  as follows: molecules that have benzothiazole moiety were used as the maximum common substructure for alignments Finally these alignments were combined for subsequent CoMFA study. Fig. (1)  shows aligned molecules.

FIG. 1: POSSIBLE BINDING CONFORMATIONS OF BENZOTHIAZOLE DERIVATIVES SUPERIMPOSED ON THE STRUCTURAL TEMPLATE (30). THE ALIGNED MOLECULES ARE SHOWN IN CAPPED STICKS.

To speed up the analysis a minimum column filtering value of 2.00 kcal/mol was used for the cross-validation. Further, final analysis was performed to calculate non cross-validated r2 using the optimum number of components obtained from the leave one out cross validation analysis. To assess the robustness and statistical confidence we performed bootstrapping analysis by taking 100 runs.

In the present study, we analyze the nature of Benzothiazole derivatives using 3D-QSAR (Three-dimensional quantitative structure–activity relationship) analysis. (CoMSIA) Comparative molecular similarity indices analysis was used. In CoMSIA, changes in ligand affinities are directly related to changes in molecular properties. 19 CoMSIA method is good at describing the intermolecular interactions (steric, electrostatic, hydrophobic, hydrogen bond donor and acceptor) present at the molecular binding site. The method has been used to study the ligand–protein interactions before and has proved to be of good predictivity.

The CoMFA and CoMSIA analyses were performed using the partial least square (PLS) method.  PLS regression technique is useful in common cases where the number of descriptors is comparable to or greater than the number of compounds and / or there exist other factors leading to correlations between variables. Biological activity is used as dependent variable and molecular descriptors as independent variable.  The column filtering was set to 2.0 kcal/mol, to improve the signal-to-noise ratio. q2 (conventional r2) were performed by the Leave-One-Out (LOO) procedure, for the calculation of optimum number of components (N). The cross-validated r2 resulted in optimum number of components and lowest standard error of prediction were considered for further analysis. No-validation, cross-validation and finally bootstrapping analysis was performed to calculate conventional r2 using the optimum number of components.  Bootstrapping analysis for 100 runs was performed.

The 3D-QSAR CoMFA and CoMSIA studies were carried out using Benzothiazole derivatives, which are reported IC50 values on P56lck. 44 molecules were taken for the present study. All the 44 compounds were partitioned into a training set of 10 and a test set of 34 compounds as 1:3 ratio (1 percent in test set is and 3 percent in training set) were selected randomly. The ambiguity of ligand-receptor interactions in general, a statistically robust models were obtained from the CoMFA and CoMSIA models. Training set and test set Experimental and predicted activities are given in Table 3 and 4.

The CoMFA and CoMSIA PLS analysis is summarized in Table 2. The cross-validated correlation co-efficient is used as a measure of goodness of prediction whereas the non-cross-validated conventional correlation co-efficient indicates goodness of fit of a QSAR model. F value indicates for the degree of statistical confidence. A cross-validated correlation co-efficient q2 of 0.710 was obtained using 5 as optimum number of components and 2.0 kcal/mol column filtering was used for the present model. The r2cv obtained indicates a good internal predictive ability of the models. The models developed also exhibited a wonderful non-cross validated correlation co-efficient r2 of 0.966. The Test set compounds are used to evaluate the external predictive capabilities of QSAR models. 10 compounds were selected in test set randomly were set-aside during model development. Further, a bootstrapping analysis was done for 100 runs. The r2bs value obtained 0.966 of bootstrapping by 100 runs which further supports the statistical validity of the developed models and absence of chance correlation. The contributions of steric to electrostatic fields were found to be 69.0% for steric and 31.0% for electrostatic. Steric contribution is more than compared to electrostatic contribution.

The  optimum  CoMSIA  model  was  derived  with the combination of steric, electrostatic, hydrophobic, H-bond donor  and  H-bond  acceptor  field  contribution  using Gasteiger-Hückel  charge  with  2.0  Å  grid  space.  Leave one out analysis gave the cross-validated q2 of 0.642 with 6 components and column filtering was set to 1.0 kcal/mol. Non-cross-validated PLS analysis resulted in  a  correlation  coefficient  r2  of  0.977,  F=  97.230, with  an  standard error of estimate  0.221.  Later we performed bootstrapping analyses to evaluate the robustness and statistical confidence of the final models (r2 bootstrapping = 0.977, Std Dev= 0.017).   Statistical results obtained from the developed model verified the predictive ability of the model (Table 1).  The predictive ability of the developed CoMSIA model was assessed by the test set (ten molecules), were excluded during model generation. Predicted, experimental, residual values of all inhibitors are shown in Table 2.

The steric contour of the CoMFA model is displayed in Fig. 3(a). The plot shows two large green contours, where an increase in steric bulkiness is expected to increase the inhibitory potency. This fact is consistent with the better activities of the relatively bulkier compounds. The plot shows one large, five medium sized contours and a small green contour plot present in the highest active compound 30, indicating that these areas would prefer a small branch rather than a bulky substituent. These contours are in conformity with the experimental observation.

The electrostatic contour map for CoMFA model is depicted in Fig. 3(b). In electrostatic contour map a small red contour is present at OH position.  And two medium sized blue contours are present. The plot shows red contour at OH position. This plot accounts for the experimentally observed fact that compounds having an electron withdrawing group near this area have a higher inhibitory potency. This is exemplified in the lower activities of compounds.  From this, it clearly indicates that electron withdrawing groups near this region are important to enhance biological activity of these inhibitors and these could be usefully employed to design novel inhibitors. The plot also shows two medium blue contours over the methyl group. This seems to explain for the better activity of compound 30 as compared to last active compound. The contours in both cases are generally qualitatively similar.

The contour maps of CoMSIA are represented by color codes shown in Fig.4. To aid in visualization, the highly active inhibitor 30 was overlaid in the maps. Fig. 4 (a) shows the CoMSIA steric field.  A large sized of green contour above the isopropyl ring indicates that bulk substituents are favorable in this region. Green contour region suggests that a bulky substituent is preferred in this position to produce higher inhibitory activity.  The  yellow  contour  near  the  CH3 position  of  benzene  ring  indicates  the  need  for  a  small substituent  in  this  area  to  improve  the  biological  activity. 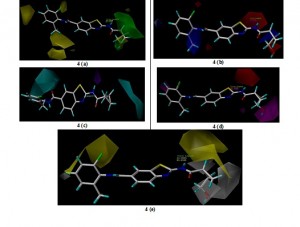 Fig. 4 (e) shows the graphical interpretation of the hydrophobic interaction in the CoMSIA model. Yellow polyhedra regions and white contour region indicate the areas where hydrophobic and hydrophilic properties are preferred. There are two big yellow contours extending towards isopropyl group. One is above the first carbon atom, and the other one is near the isopropyl ring. The two large yellow polyhedra indicates that hydrophobic groups in this region are beneficial to increase the activity. Also, three large white and a small white contours are found near the isopropyl group. These white contour maps reveal that the necessity of the hydrophilic substituent on the isopropyl ring to the activities.

CONCLUSION: The CoMFA and CoMSIA analysis using 44 Benzothiazole derivatives as p56lck inhibitors was used to build statistically significant models with high correlative and predictive capability for the inhibition of P56lck. These models could be usefully employed to prioritize chemicals for synthesis or in search of novel scaffolds from screening of chemical databases. The contours were found to be more or less qualitatively similar in accord with the experimentally observed binding site homology. This is of great aid to design dual inhibitors. The analysis of contours has provided a clue about the structural requirement for the observed biological activity. This analysis could be of help in the rational drug design of potential drug candidates with an enhanced inhibitory potency.