ABSTRACT: Cancer is an uncontrollable incurable disease with abnormal growth and proliferation of cells. Thyroid cancer is caused due to the thyroid hormone effects on growth, development and homeostasis in mammals. Thyroid cancer is the most common endocrine malignancy. Thyroid hormone is encoded by two types of thyroid receptors that are TRα and TRβ. TRα is functionally divided in two types TRα1 and TRα2. TRα1 is expressed first during fetal development and is widely expressed in adult tissues. Over-expression of TRα1 has shown its ability to trigger hyper-proliferation and to accelerate the tumeorigenic process in developing intestinal cancer. The novelty of our approach is to demonstrate the inhibitory activity of a plant extract compound against TRα1 using In-silico methods. Andrographis paniculata plant leaf is extracted with Methanol and three compounds were identified from GC-MS analysis. The 3D crystal structure of the thyroid cancer for Thyroid hormone receptor alpha1 (ID: 1NAV) were retrieved from the Protein Data Bank (PDB) and was used for carrying out the molecular docking calculation. The result shows that, of three compounds extracted from A. paniculata leaves, compound 6-Oxa-3-thiaoctanoic acid exhibits potential inhibitory activity against TRα1.

Thyroid cancer is discovered with synchronous metastases, which will progress quickly with a worse survival 6-9. Although the incidence of thyroid cancer is low (only approximately 1% of all tumors) and the prognosis is better, it accounts for more than 90% of all endocrine cancers, and it contributes to more than 50% of deaths from endocrine cancers 10-12. Most thyroid cancer patients do not have a history of radiation exposure and not all individuals exposing to radiation develop thyroid cancer, which indicates that genetic factors also play an important role in the development of thyroid cancer 13, 14. Thyroid hormone effects on growth, development and homeostasis in mammals 15.

Thyroid hormone Receptors (TRs) are transcription factors that belong to the nuclear receptor super family 16. The synthesis of Thyroid Hormones (THs) is regulated through the hypothalamus, pituitary thyroid axis 17.

The thyroid gland predominantly secretes Thyroxine (T4) and Triiodothyronine (T3). Triiodothyronine (T3) is the most active TH, since it has a higher affinity by the nuclear TRs, which mediate most actions of these hormones 18. T3 exerts its actions by translocation into the nucleus of target cells and binding to the Ligand Binding Domain (LBD) of TRs 19 and it regulates important genes in intestinal, skeletal, and cardiac muscles as well as in the liver, and the central nervous system 20. The TRs encoded by two genes with THRA and THRB are located on two different chromosomes. Classically, TRs bind to specific DNA sequences on the promoter of T3-target genes TREs to activate or repress basal gene transcription are two genes for TRs are TRα and TRβ, that give rise to an ensemble of four different isoform by means of alternative splicing or differential promoter usage: TRα1, TRα2, TRβ1, and TRβ2 19, 21. TRα1 is expressed first during fetal development and is widely expressed in adult tissues; TRβ1 appears later in development and displays highest expression in the adult liver, kidney, and lung 22.

Thyroid hormone receptor alpha1 also known as nuclear receptor subfamily, group A, member 1(NR1A1), is a nuclear receptor protein that in humans is encoded by the THRA gene it’s a several receptors for thyroid hormone, and has been shown to mediate the biological activities of TR 23, 24. TRα1 and TRβ1 vary from 400 to 500 amino acids in size, having abundantly homologous LBD. TRα isoforms α1, α2 and α3, are encoded by the TRα gene. These isoforms vary in their carboxyl termini due to alternative splicing. TRα1 has a binding capacity for T3, which leads to activation or repression of target genes, whereas TRα2 and TRα3 are non-T3 binding products and inhibit T3 functions 25.

TRα is the main isoform expressed in the heart and mediates many of the effects of the THs in this organ 26-28. TRα function is cardiomyocyte growth 29, for suppression of MHC-β expression 30, and whereas mice in which TRα has been genetically inactivated shown a markedly decreased heart rate, mice with deletion of TRβ have a normal heart rate. Furthermore, TRα KO mice show increased relaxation time and decreased tension development 31. TRα is predominant in the hepatocyte precursor, the stellate cells, and this isoform could play a critical role in hepatocyte maturation during the perinatal period 32. TH controls the proliferation of the intestinal epithelial progenitors during the postnatal maturation steps in both amphibians and mammals. Moreover, this process is strongly correlated with a set of common, regulated TH-target genes and signaling pathways, although important differences also exist 33. Both TRα and TRβ are expressed in intestinal epithelial cells 34, but the proliferation of epithelial cells depends mainly on the TRα1 receptor involves the regulation of cell cycle control genes and of the Wnt/β-catenin pathway, a key modulator of cell proliferation in the intestinal epithelium. Liganded TRα1 increases expression of both β-catenin and secreted frizzled-related protein-2 (sFRP2), resulting in expression Wnt target genes and in the stimulation of epithelial progenitor proliferation 35, 36.

For recent year researches have aimed at identifying and validating plant derived substances for the treatments are 25% of modern medicines are directly and indirectly derived from plants 37-39 the natural plant compounds or phytomedicines used for various diseases 40, 41. A. Paniculata is used in traditional Siddha and Ayurvedic medicine as well as in tribal medicine in India and some other countries for multiple clinical applications. The plant extracts exhibited anti-typhoid, anti-fungal, anti-hepatotoxic, anti-biotic, anti-malarial 42, and anti-cancer activities 43. This study was an attempt to identify bioactive compounds from A. Paniculata plant leaves using GC-MS analysis and molecular docking study were carried out.

Collection and Preparation of Sample: The Andrographis paniculata leaves were collected from Annamalai University, Annamalai Nagar, Chidhambaram, and Tamilnadu. The plant leaves were collected in the morning session (during 8am- 10am) and were packed new polyethylene bags. The samples were transported to the Laboratory at Annamalai University and kept at room temperature for further processing. The leaves were washed and shade dried leaves of Andrographis paniculata were then pulverized into powder and kept an airtight container for using further process.

Preparation of protein structure: The 3D structure of Thyroid hormone receptor alpha1 (PDB I.D: 1NAV) was downloaded from the Protein Data Bank (PDB) (http://www.rcsb. org/pdb/). The structural information of the macromolecules determined by X-ray crystallographic and NMR methods is available in the PDB. The water molecules were removed from the protein structure (1NAV) before docking.

Preparation of Ligand structures: The identified Chemical compound 6-Oxa-3-thiaoctanoic acid was derived from Andrographis paniculata plant leaves and its structural properties were retrieved from the PubChem. ChemSketch (Chemically intelligent drawing interface freeware developed by Advance Chemistry Development, Inc., (http:// www.acdlabs.com) was used to construct the structure of the ligand and to determine the basic properties.

The ligand molecule was generated and the three dimensional optimizations were done and finally the optimized file was saved. MOL file (a file format for holding information about the atoms, bonds, connects and coordinates of a molecule).

This histogram denotes the corresponding amino acids are involved in hydrogen bond formation between target and bioactive compound the amino acids are respectively SER277, GLY278, the Protein–Ligand docking was performed and the Libdock score value 72.05. The electrostatic potential surface was also created (Fig. 9). This computational technique strongly supports and helps to identify the novel and more potent inhibitors through Ligand-Receptor interaction. 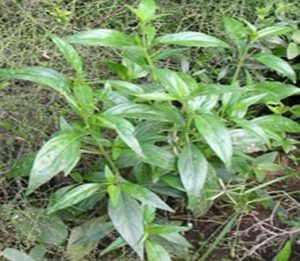 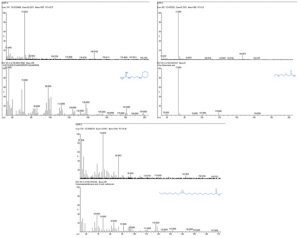 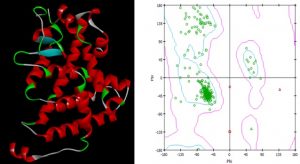 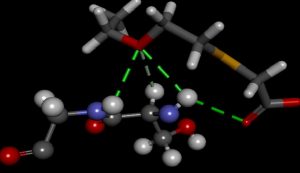 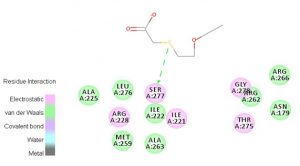 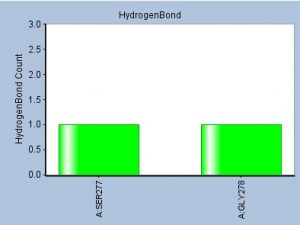 DISCUSSIONS: Hebraism has a long tradition of use of outside of conventional medicine. It is becoming more mainstream as improvements in analysis and quality control along with advances in clinical research. Molecular Docking is important methods in computerized drug designing for different targeted disease, including cancer 44. The Andrographis paniculata plant Tamil name nilavembu it’s commonly called medicinal plant it has pharmaceutical important and also used as chemotherapeutic agents in the treatment of several types of cancers 43 is the study was structured-based drug design for thyroid cancer, here we used GC-MS analyzed compound identified from A. paniculata plant leaf 6-Oxa-3-thiaoctanoic acid inhibiting thyroid hormone receptor alpha1 (TRα1) responsible to thyroid cancer. 6-Oxa-3-thiaoctanoic acid compound has stronger and higher binding affinity.

There are 2 hydrogen bond interactions resulting with corresponding amino residues for SER277, GLY278 and the libdock score value is 72.05. The present study proves the A. paniculata plant leaf compound 6-Oxa-3-thiaoctanoic acid as the potential ability to inhibiting Thyroid cancer.  Our In Silico study strongly supports for further researchers in clinical trials to test its effectiveness and for social benefit thus reducing the time and cost of the drug discovery.

ACKNOWLEDGEMENT: We are thankful to the authorities of UGC-SAP department of Zoology, Annamalai University for providing necessary facilities to carry out this work.