Tylophora indica is an important medicinal plant from the repository of valuable plant species of Indian subcontinent. The plant has a long reputation in curing various health ailments including asthma, bronchitis, rheumatism and other respiratory problems. Due to its vast medicinal importance, the plant is exploited on a large scale and its uncontrolled and unmonitored harvesting from the wild has categorized the plant among the endangered plant species.

The plant inhabits up to an elevation of 1,260 m in the sub-Himalayan tract. Tylophora comprises of 50 species which are widely distributed in Africa, Asia, Australia and Oceanic Islands and it also harbors in Ceylon, Malay island and Borneo. It grows well on a wide range of well drained soils preferring sandy localities and shows stunted growth in the areas with lesser rainfall.

The normal method of propagation is through seeds, but seeds are too small and have low seed viability and germination.

Moreover, propagation by vegetative cuttings like stem cuttings is rather difficult as they failed to produce proper roots 3. Therefore, micropropagation is the only best alternative for producing true to type and rapid copies of this important plant.Plant is traditionally used as a folk remedy in the treatment of bronchial asthma, bronchitis, rheumatism, allergies, inflammation, dysentery, whooping cough, diarrhea 4, 5, 6.  The leaves and roots of the plant contain 0.2-0.46 % therapeutically important alkaloids viz. tylophorine, tylophorinine and tylophorinidine 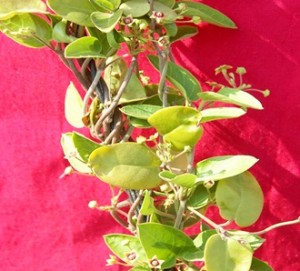 These potent alkaloids endowed this plant with a variety of medicinal value to cure various human ailments. Numerous pharmacological investigations have established the pharmaceutical potential of this important medicinal plant. Major alkaloid tylophorine has immunosuppressive, anti-inflammatory 7, anti-tumor 8, anti-candidal 9 and anti-amoebic and anticancerous properties 10 while alkaloid tylo-phrinidine has antileukemic 11 properties. Tyloindicines F, G, H and I, a group of minor alkaloids, are cytotoxic.

In a follow-up study, another set of tyloindicines from T. indica with even more intriguing structural features were also isolated 10. Of this set, tyloindicines F and G featured a unique tertiary hydroxy group and were screened for anti-tumor potential.

CONCLUSION: From the present review, it can be concluded that exhaustive work has been done on the plant but still there is a need to explore other potent phytoconstituents from the plant with valuable pharmacological properties which can serve as a source of novel high quality formulations.