Medical chemistry also provides for the detection, development, explanation, and validation of the mechanism of action of biologically active molecules at the molecular level 1, 2. Arylpropionic acid derivatives are a large and important family of non-steroidal anti-inflammatory drugs (NSAIDs) 2, 5. NSAIDs are often used to treat various arthritis and musculoskeletal disorders 6-9.

The biological response of NSAIDs is the result of inhibition of prostaglandin biosynthesis (PG), where cyclooxygenase enzyme (COX) plays a key role in prostaglandin biosynthesis derived from arachidonic acid 10, 14. In the early 1990s, COX was found to have two forms, namely the COX-1 component, which provides gastrointestinal cyto-protection (GI) and the other inducible COX-2, which mediates inflammation 15, 16. One of the NSAIDs viz. Ibuprofen, a chemical called propionic acid 2- (4-isobutylphenyl), is a popular pain relief 14, 15. This is known for its use in the relief of arthritis pain. Long-term use of NSAIDs leads results in gastrointestinal ulceration, bleeding and nephrotoxicity 18, 20. The gastrointestinal damage is generally associated with two factors which include local irritation by carboxylic acid moiety, which is common in most NSAIDs (topical effect) and decreased the production of tissue prostaglandin (PGs), which minimizes the physiological role of cytoprotective prostaglandins in maintaining GI health and homeostasis 21.

Studies showed that forming the derivative of the carboxylate function of representative NSAIDs resulted in an enhanced anti-inflammatory activity with reduced ulcerogenic effect. Moreover, certain compounds bearing 1, 3, 4-oxadiazole/thiadiazole and 1, 2, 4-triazole nucleus have been reported to bear significant anti-inflammatory activity 19, 20. In the last two decades, there has been a considerable amount of work in the role of reactive oxygen species in inflammation. Inflammation is one of the manifestations of oxidative stress and the pathways that generate the mediators of inflammation, such as adhesion molecules and interleukins 21.

2.3 Anti-convulsant Activity: Semwal A. synthesized a series of b, b- diphenyl propionic acid amides, which were evaluated for anti-convulsant activity using Maximal electroshock seizures (MES) method.

The compounds (1-8) showed mild to moderate anticonvulsant activity ranging from 0.0% to 50% in Table 3. Indomethacin was taken as standard drug 31-33. 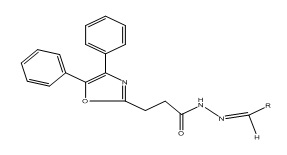 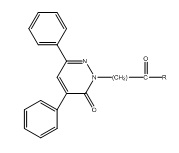 Rayam P. et al., synthesized a series of acyl hydrazone derivatives of 3-(4, 5-diphenyl-1, 3-oxazole-2-yl) propionic acid. The key intermediate N- acyl hydrazine was prepared in good yield from NSAID oxaprozin, was coupled with a variety of aromatic aldehydes under conventional as well as microwave irradiation conditions.

2.6 Anti-nociceptive Activity and Ulcerogenic Activity: Grigoryan et al., 2019 synthesized a new method of a non-protein amino acid (NPAA) which showed that this compound injected in a dose of 10 mg/kg (i.p.) inhibited xylene-induced ear edema by about 31.1%, which proved its anti-inflammatory properties. The anti-nociceptive activity of NPAA-36 was assessed in the tail-flick test by the ability to increase the tail cut-off latency by 36.78% within 60 min after injection at the same dose.

Investigation of the ulcerogenic properties of NPAA-36 demonstrated that it exhibited lower gastrointestinal toxicity than a well-known aryl propionic acid derivative NSAID. Results of in-vitro experiments showed the Anti-platelet activity registered not in all (only in 41.2%) cases, which might imply lower bleeding. The obtained data indicate that the new NPAA derivative can be a potential basis for the development of new anti-inflammatory drugs with weak side effects 52.

Studies on the structure-activity relationship (SAR) were conducted on 3-aryl propionic acids as selective agonists by introducing substituents to the chain of propionic acid the adjacent phenyl ring with pyridine chain was replaced to develop a series of containing modified 3-aryl propionic acids with an enhanced half-life in rat 30, 64, 65. The important members of this class, ibuprofen, naproxen, and Ketoprofen are now available as OTC medicines.

However, the indiscriminate use of these drugs without a physician's prescription has resulted in an increased incidence of acute and chronic renal failure in adolescents 70, 57. All compounds belonging to aryl and heteroaryl propionic acids (except Oxaprozin) possess a chiral carbon in the á-position of the acetic acid side chain. Although most of the compounds are marketed as racemates, only the (S)-enantiomer was found to have any inhibitory activity against the COX isoenzymes 72. Therefore, only (S)-enantiomer is believed to be responsible for the observed therapeutic action as well as the drug-induced GI side effects and nephrotoxicity 68, 67.

The details of some potent compounds and their pharmacological activities associated are presented in Table 11.

CONCLUSION: Based on various literature surveys, aryl propionic acid derivatives show broad-spectrum various activities such as anti-bacterial, anti-cancer, anti-Convulsant, analgesic, and anti-inflammatory, antinociceptive activity and ulcerogenic activity. The possible improvements in the activity can be further achieved by slight modifications in the substituent on the basic aryl propionic acid.

CONFLICTS OF INTEREST: The author declares that no conflicts of interest.