Introduction: Rheumatoid arthritis (RA) is the most common chronic inflammatory arthritis. This systemic autoimmune disease causes progressive joint destruction and loss of functional capacity. Although, the physiopathology of RA is still largely unknown, both genetic 1 and environmental factors were involved 2.

Besides, the RA has not yet been recognized as an oxidative stress disease, despite the chronic oxidative stress observed in synovial T lymphocytes of RA patients due to the production of intracellular reactive oxygen species (ROS) 3.

The aim of this prospective study was to assess the antioxidant status by measuring the superoxide dismutase (SOD), glutathione peroxidase (GPx), glutathione reductase (GR) and catalase (CAT) erythrocyte activities and the total antioxidant status (TAS) levels in patients with RA. Besides, we wanted to quantify the pro-oxidant parameters (MDA and Hcy) in RA affected patients compared to a control cohort.

172 patients, with no smoking history, were enrolled in this study (average age: 48± 13 years), that men represent 2.9 % to eliminate gender differences in the results. The mean RA onset was 3±2 years before the beginning of this study. Patients were recruited from the Rheumatology Department of the University Hospital “Farhat Hached”, Sousse-Tunisia. All the patients were diagnosed according to the American Rheumatism Association criteria, 1987 (ARA) 8. View the rarity of a disease, the collection of subjects took around 18 months.

Patients suffering from chronic disorders such as thyroid dysfunction, liver or kidney disease, inflammatory disease, infection and those who are smoking, consuming alcohol or any antioxidant supplements at the start of the study or in the preceding month were excluded. 79.6% of patients (125 women and 4 men) have been treated by the Methotrexate for at least three months.

Venous blood samples from RA patients and healthy volunteers were collected in heparinized and without anti-coagulant tubes. Informed consent was obtained from all patients and controls and the study was carried out according to the Tunisian guidelines for genetic research. The heparinized whole blood was used to determine the erythrocyte activities of GPx, GR, SOD and CAT, while plasma was used to evaluate TAS and MDA levels. Hcy levels were determined on serum.

The GPx activity was determined using cumene hydroperoxide as an oxidant of glutathione. The oxidized glutathione is immediately converted to the reduced form with a concomitant oxidation of NADPH to NADP+.

CAT activity was measured using the molybdate colorimetric method described by Góth et al. (1991) 9 and expressed in kilo unit per gram of hemoglobin.

TAS rates were assayed by colorimetric method at 600 nm (TAS, Randox, Antrim, UK) and expressed in milli mole per litre.

Plasma MDA was determined by the Yagi spectrofluorometric method 10 which is based on thiobarbituric acid (TBA) reaction at 95°C. The fluorescence was detected at 553 nm after excitation at 515 nm. The results were expressed as micro mole per litre (µmol/l). Serum Hcy was measured by fluorescence polarization immunoassay (Abbott, AxSYM) expressed in micro mole per litre (µmol/l). All bioassays were performed in Biochemistry laboratory, Farhat Hached hospital, Sousse, Tunisia.

TABLE 1: DEMOGRAPHIC, CLINICAL AND BIOLOGICAL DATA OF PATIENTS and controlS

In our study, a significant decrease of CAT, GPx and GR activities as well as a lower TAS were noticed among patients compared to controls.  Conversely, MDA and Hcy levels were significantly higher in patients than in healthy subjects. However, no difference of erythrocyte SOD activity between patients and controls was found. Those Variations were illustrated in Table 2.

TABLE 2: The distribution of anti-oxidant and oxidant parameters in patients and control subjects

To fulfill patient’s age impact scope by 10-year age range the HCY and SOD were important result as below: 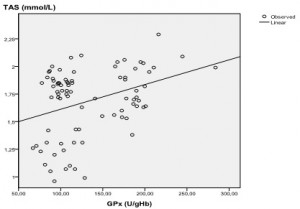 FIG. 1: THE CORRELATION BETWEEN GPX ACTIVITY AND TAS LEVELS

“It is a bottom line that represents the relationship between the values ​​of the GPx activity and rates of SAT. Patients with high GPx activity have a relatively high TAS and screw to it.”

Circles indicate the observed values of GPx and TAS 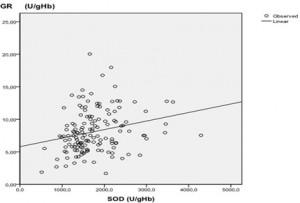 FIG. 2: The correlation between SOD and GR activities in RA patients

It is a bottom line that represents the relationship between the values ​​of the GPx and SOD activities. Patients with high GR activity have a relatively high SOD activity and screw to it.” GPx, glutathione peroxidase; SOD, superoxide dismutase; U/gHb, units per gram of hemoglobin; RA, rheumatoid arthritis.

Circles indicate the observed values of SOD and GR

Discussion: In the first line of antioxidant defense, the SOD catalyzes the dismutation of the first product of ROS, the superoxide anion (O2-) into H2O2 11. Our data demonstrate that the activity of erythrocyte SOD is unchanged in patients with RA compared to healthy individuals which is in line with a previous study performed by Sarban et al. 12. However, it is undeniable that further studies done on patients with RA have shown a decreased erythrocyte SOD activity in their patient’s cohort 5, 13. This lack of results reproducibility from one study to another could be explained by the intervention of environmental factors in the onset of the disease between one population to another and also by the size of the study cohort which without any doubt could play an important role in the interpretation of the results. It is worthy to note that to our knowledge, our RA study population is the largest one actually reported.

Further studies performed on patients with RA have shown a strong association between the disease onset and an overproduction of ROS by synovial T lymphocytes 3 and neutrophils, which are the main actors in inflammation and destruction of joints 14. Several cytokines were also implicated in the articulation damage and correlated with synovial ROS generation, mainly tumor necrosis factor alpha (TNFα) 15.

These factors activate the mitochondrial SOD (SOD2) 16 and inhibit the cytosolic SOD (SOD1 or Copper/Zinc-SOD) 11 and the extracellular SOD (SOD3) 17. GPx and catalase then metabolize H2O2, which is produced by the SOD. The GPx acts also on lipid hydroperoxides resulting from the peroxidation of polyunsaturated fatty acids 18.

In our study, GPx activity was significantly lower in patient’s erythrocytes compared to controls, which is in accordance with previous researches 12, 13. Furthermore, catalase activity significantly decreased in RA patients which is in line with the study performed by Sarban et al. 12 and El-barbary et al. 5. A similar decrease of CAT activity was also detected in the synovial fluid of RA patients as reported by seven et al. 13.

In our study population, plasma TAS levels in patients with RA were significantly lower than in healthy individuals and confirm the study of Abdel-Rahman et al. 19 who evaluated the TAS only in female patients with RA.

We have also demonstrated that Lipid peroxidation reflected by MDA levels significantly increased in RA patients compared to normal healthy subjects; these results are in agreement with many studies in plasma 6, 20, in erythrocytes 4 and in synovial fluid 13, 15. As a whole, the negative correlation deduced between MDA and the activities of GPx and CAT 13 confirm the pro-oxidant effect of MDA in RA onset. Enhanced lipid peroxidation may occur as a result of imbalance between scavenging mechanisms and free radical generation process. In Rheumatoid arthritis, the ROS are produced in synovial infiltrates in inflamed joints and correlates with DAS_28 21 and with synovial MDA 15. These reactive species, if not scavenged, lead to lipid peroxidation. Synovial MDA was found to be correlated to disease activity score (DAS_28), hence it can be used as marker of disease activity 15.

In the present study, Hcy was significantly increased in RA patients, which is in agreement with a previous finding reported by Willers et al. 22. This hyperhomocysteinemia could be explained by the administration of methotrexate and corticoid that are previously reported to generate such effect 23. It is actually known that, homocysteine is an amino acid transformed in methionine by dependent-folate remethylation and methotrexate interferes with folate metabolism which explains the increase of homocysteine levels in methotrexate treated RA patients 24.

Some of our findings did not match the previously reported ones which could be attributed to the disease duration, the treatments administrated to RA patients and the study population size and characteristics (subject’s number, age...) in addition to the environmental factors. In fact, such variability was also detected in a previous report due to treatment and disease period 26.

Conclusion: In summary, our data demonstrate that the oxidative stress is implicated in the RA onset and is manifested by impaired antioxidant parameters and an increase of plasma MDA and Hcy. Thus, we think that the administration of some antioxidant enzymes to these patients may protect them from the ROS generation and decrease their serum Hcy levels. Thus RA patients will be protected from cardiovascular disease resulting from hyperhomocysteinemia.

ACKNOWLEDGEMENTS: The authors are grateful to the patients and volunteers for their collaboration, to Dr Elyes Bouajina and his team (Rheumatology Department, Farhat Hached hospital, Sousse, Tunisia) for collecting blood samples from RA patients and the staff of the Biochemistry Laboratory (Farhat Hached University Hospital, Sousse, Tunisia) for their precious technical support.

Conflict of interest: The authors declare that they have no competing interest.