ABSTRACT: Ischemic heart disease (IHD) is the major cause of morbid-mortality in most countries. The involvement of oxidative stress (OS) in the development of atherosclerosis, ischemic cardiopathy triggering phenomen, has been investigated. Serum total homocysteine (Hcy) concentration was measured by fluorescence polarization immunoessay. Plasma levels of substances reacting with thiobarbituric acid (TBARS) were carried out by fluorimetric method (Yagi). Erythrocyte activity of superoxide dismutase (SOD) and plasma total antioxidant status (TAS) were determined by a colorimetric method at 505nm and 600nm, respectively. Erythrocyte activity of catalase (CAT) was measured by colorimetric assay (Góth). Glutathione peroxidase (GPx) and the glutathione reductase (GR) erythrocyte activities were determined by a colorimetric method at 340 nm. Our study showed significant elevation of Hcy and TBARS levels in patients compared to controls. While we noted significant decrease in TAS levels, SOD, CAT, GPx and GR activities in patients compared to the control group. We also noted positive correlations between: Hcy-TBARS, SOD-TAS, CAT-TAS, GR-TAS, GPx-TAS, SOD-CAT and GPx-GR. However negative correlations between: Hcy-SOD, Hcy-CAT, Hcy-GPx, Hcy-GR, Hcy-TAS, TBARS-SOD, TBARS-CAT, TBARS-GPx, TBARS-GR and TBARS-TAS were founded. This unsuitability, elevated pro-oxidant rate parameters and decrease of antioxidant parameters in patients compared to controls allows supporting the hypothesis that OS is involved in the genesis and progression of atherosclerosis.

INTRODUCTION: Inappropriate oxidation of biomolecules is a hazard associated with all aerobic life. Harmful oxidation is often mediated by reactive oxygen species (ROS) that are generated by a wide range of biological processes, including mitochondrial respiration and both enzymatic and non-enzymatic chemical reactions 1. The fine balance between ROS and antioxidants - that “neutralize” ROS before their react with cellular components and alter their structure or function 2 is disturbed when excessive amounts of free radicals (FR) are produced or antioxidant capacity is decreased 3.

There are two types of antioxidant substances, endogenous and exogenous; Endogenous antioxidants include superoxide dismutase (SOD), catalase (CAT), glutathione enzymes and uric acid. There are three forms of glutathione dependent antioxidant enzyme: GPX, GR and glutathione transferase, out of which assessed the activities of GPX and GR 4. Exogenous antioxidants witch derived from diet include vitamins A, C, and E 1. The total antioxidant status (TAS) is potential activity mirror’s of the antioxidant system because effects of antioxidant components are additive 5. Pro-oxidant substances can be described as either FR species or non-radical species that mediate oxidation of several substances, such as homocysteine (Hcy) or by Substances reacting with thiobarbituric acid (TBARS) known as products of lipid peroxidation. The two major sub-groups of FR are ROS and reactive nitrogen species (RNS) 1. This disturbance plays an important role in cardiac pathophysiology 3, one of the major health problems of developing countries of the world 6.

Currently, an increasing number of studies suggest that levels of oxidative markers in body fluids correlate with atherosclerotic disease 3 and it’s a critical key in most steps of the atherogenosis 8.

Several studies support the hypothesis that OS was intimately linked with the pathogenesis of oxidative myocardial damage with consequential IHD 9, 10, 11.

Our study attempted to assess OS in atherosclerosis and its contribution to the IHD, wich was accomplished by the evaluation of levels and correlations between Hcy, TBARS, SOD, CAT, GPX, GR and TAS.

The present study had involved 298 patients (mean-age: 61±12 years) recruited, from the Cardiology Department of the University Hospital, Farhat Hached, Sousse-Tunisia. All cases fulfilled these inclusion criteria: presenting symptoms and signs suggestive of IHD such as chest pain and dyspnea supported by electrocardiogram and cardiac markers who presented within six hours. Patients having revascularization, Infection, cerebrovascular accident, transplantation, liver disease, renal failure, Cancer, splenomegaly, intermittent claudication and those with other major illness were excluded from the study. The control group consisted of 176 healthy volunteer subjects (mean-age: 46±7 years).

All patients and controls gave informed consent to participate in this study which was approved by the National Medical and Research Ethics Committee. The methods carried out in the study are in accordance with the approved relevant guidelines and regulations.

Venous blood samples from patients and healthy volunteers were collected in fluoride, heparinized and without anti-coagulant tubes.

Serum was used to determine hs CRP according to the instructions of the manufacturer using microparticular immunoenzymatic method (COBAS-INTEGRA 400, Roche) and Hcy levels by fluorescence polarization immunoassay (FPIA) from AxYM Abbott diagnostics.

Lipid peroxidation was estimated by the determination of plasma TBARS levels, according to the fluorimetric method of Yagi13.

The heparinized whole blood was used to determine the erythrocyte activities of SOD at 505 nm and GPX and GR at 340 nm (RANDOX Kits) by a colorimetric method, in Daytona – analyser.

SOD, GPx, GR and CAT activities were expressed in kilo unit per gram of hemoglobin (Hb).

TAS levels were determined in plasma by colorimetric method at 600 nm according to the method of Miller et al 16 (RANDOX Kits) in Daytona–analyser.

Database management and statistical analyses were performed by the SPSS (Statistical Package for the Sociological Sciences) software, version 20. The Student’s test was used for differentiating averages and Pearson’s correlation coefficient to determine the relationships between parameters.  P values less than 0.05 were considered as significant.

Anthropometric characteristics of the study groups are presented in Table 1.

The comparison of biochemical parameter variations between IHD cases and controls is shown in Table 2.  Patients had significantly higher glucose, urea, creatinin, uric acid, CT, TG and C_LDL levels than the controls, while no significant differences in C_HDL levels compared to controls. 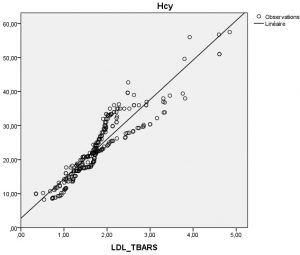 FIG. 1: POSITIVE CORRELATION AMONG IHD PATIENTS BETWEEN HCY AND TBARS.

“It is a bottom line that represents the relationship between; Hcy (µmol/l) and TBARS (µmol/l) rates. Hcy: homocysteine, TBARS: substances reacting with thiobarbituric acid”. 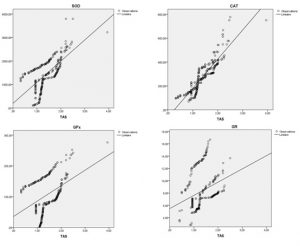 DISCUSSION: Increased serum Hcy levels in IHD patients compared to control a subject is in close conformity with other findings 11.

Hcy are associated with risk accenting and increased mortality in the general population. The published literature indicates that Hcy is an independent atherosclerotic disease risk factor (RF) in coronary, cerebral and peripheral arteries and show a correlation between hyper homocysteinaemia and several atherosclerosis RF (hypertension, diabetes, smoking, dislepidemia 14, 17.

Hcy can act either independently of atherosclerosis and thrombosis or by increase thrombosis 7, 18.

Other studies support the hypothesis that Hcy is a prooxydant marker. In fact, the sulfhydryl groups in Hcy were oxidized to a disulfide, catalyzed by the transition metals which product several Oxygen free radicals (OFR) such as hydroperoxides (H2O2), and initiates lipid peroxidation responsible of endothelial injury 19, 20.

Our findings show a significant increase in plasma TBARS levels. This is in accordance with those of khatibi F et al. High TBARS levels may be resulted from increase lipid peroxidation that’s marker of OS21, 22.

Positive correlation between Hcy and TBARS may be explained by the adverse effects of hcy witch involve oxidative damage to vascular endothelial cells and oxidative modification of low density lipoprotein, all there lead to atherosclerosis 19, 20.

OFR such as superoxide anions (O-) and hydroxyl radicals (OH-), produced by reduction of oxygen, have been implicated in cardiac ischemic injury. In normal circumstances, they were removed from the different scavenger systems present in blood and tissues. In case of myocardial ischemia, which can lead to myocardial infarction, unstable angina and heart failure, excessive OFR may be generated 25.

Erythrocyte SOD activity was significantly decreased in IHD cases which is in agreement with several studies such as those reported by Almzaiel A et al.11, 26, 27, 28. SOD, FR scavenging enzyme, is the first line of cellular defense against oxidative injury 21. SOD is responsible for converting the superoxide radical to H2O2 6 before interacting to form more reactive hydroxyl radical (SOH). This enzyme protects the red cells against O- and OH- mediated lipid peroxidation. Decrease in the activity of SOD could be due to inactivation of the enzyme by cross linking or due to exhaustion of the enzymes by increased peroxidation 21.

Thus, low level of SOD activity could reflect either a possible accumula­tion of H2O2 which has the potential to bring about oxidative tissue damage, or low capacity of defense against it. High OS status has been reported in IHD patients, even in stable cases 25.

We have also observed a significant decrease in the activity of CAT in patients with IHD, as compared to controls. CAT is enzymes that catalyze the conversion of H2O2 to H2O and O2, using either an iron or manganese cofactor 29. CAT is inactivated when counteracting these FR30.

Moreover, treatment with antioxidant enzymes, SOD plus CAT, in the heart, protects it against these changes 31, 32, 33.

Erythrocytes GPx and GR activities were significantly lowers in the patient’s compared to controls, which is in accordance with previous researches.

GPx, one of the major antioxidant enzymes, being added in both antioxidant enzymes indicated on the folding screen (SOD and CAT), plays a significant role in the H2O2 scavenging mechanism, and in maintaining the functional integration of the cell membranes. The rise in the activity of GPX could be due to its induction to counter the effect of increased OS 34.

GR catalyses the reduction of oxidized glutathione (GSSG) to reduced glutathione form, (GSH). Cysteinyl residue of GSH offers a nucleophilic thiol, which is important in the detoxification of electrophilic mobilities and metabolically produced oxidizing agents and GSH is a substrate for the enzyme GPX and Glutathione transferase.

GSH is converted to GSSG is reduced back to GSH by an NADPH dependent enzyme glutathione reductase. In the present study GR levels were found to be significantly decreased in all the groups when compared with normal, which is concurrent with Jawalekar SL et al. A positive correlation is observed between GPX and SOD. GPx is negatively correlated with TBARS and Hcy 4.

However, it is known that GPx, as well as GR, can be inactivated by oxidant species. For instance, GPx is particularly susceptible to inactivation by myeloperoxidase-derived hypochlorous acid. Remarkably, the presence of myeloperoxidase as an oxidation catalyst and of hypochlorous acid modified proteins has been proven in human atherosclerotic lesions. Peroxides are cytotoxic for vascular cells, especially in the presence of redox-active transition metals, which are available in a catalytically active form in human atherosclerotic plaques.

The pivotal role of GPx in vascular antioxidant protection is further pointed out by the findings that CAT activity is lacking in human vascular cells and that SOD is poorly effective against human cell oxidant damage. Thus, the deficient GPx and glutathione redox cycle status of the atherosclerotic tissue may significantly weaken its antioxidant potential favoring oxidative stress and atherogenic processes, even in the presence of an apparently adequate property of low molecular-weight scavenging antioxidants. Consistently, our data indicate that the lack of GPx activity in atherosclerotic lesions may be associated with a more severe expression of atherosclerosis in humans 35, 36.

The present study revealed a significant decrease in the levels of TAS. These results are in agreement with those reported by khatibi F et al 22.

One possible explanation of these findings is depletion of the antioxidant barrier as an effect of the long term OS 27, 28, 37.

This study has some limitations which have to be pointed out. Our study did not compare results of non enzymatic antioxidant (ceruloplasmin, transferin). We did not assess the protein peroxidation by measuring carbonyl proteins to show another pro-oxidant effect. However, this will be the subject of ongoing studies.

CONCLUSION: Our study supports the hypothesis that the generation of ROS is intimately linked with the initiation and progression of atherosclerotic plaque  which can lead to myocardial infarction, Unstable Angina or heart failure.

CONFLICT OF INTERESTS: The authors declare that they have no competing interests.

ACKNOWLEDGEMENTS: The authors are grateful to the patients and volunteers for their collaboration, to Dr Samia Ernez Hajri (Cardiology Department, Farhat Hached hospital, Sousse, Tunisia) and all the team for collecting blood samples from IHD patients and the staff of the Biochemistry Laboratory (Farhat Hached University Hospital, Sousse, Tunisia) for their precious technical support.