A CASE STUDY ON GLYCEMIC INDEX AND DIABETIC PERIPHERAL NEUROPATHY

A CASE STUDY ON GLYCEMIC INDEX AND DIABETIC PERIPHERAL NEUROPATHY

ABSTRACT: The term HbA1c refers to glycated haemoglobin. By measuring glycated haemoglobin (HbA1c), clinicians are able to get an overall picture of what our average blood sugar levels have been over a period of weeks/months. Diabetic neuropathy is generally assessed in clinical practice by a combination of objective and subjective measures. Nerve conduction studies, the distal sural sensory nerves and the bilateral common peroneal and posterior tibial motor nerve was performed in lower limb in female patient of 20-years old suffering from type-I diabetes from past 10-yeras and had poor glycemic control (haemoglobin [HbA1c] 9.56%). Studies showed motor conduction studies (MNCV) and sensory conduction studies (SNCV) of the lower extremities, revealed borderline- prolonged distal latencies, evoked CMAPs of reduced amplitude of common peroneal, posterior tibial (right and left) with reduced conduction velocity was observed and however sural SNAP amplitude recordings in lower limb was normal. F response latencies were markedly prolonged in patient. Electro-diagnostic techniques play an important role in the prognosis of diabetic neuropathy because timely intervention reduces disability and morbidity

INTRODUCTION: Diabetic neuropathies are a disabling complication of diabetes mellitus. Clinical sign and symptom of neuropathy are seen in approximately 20% of the diabetic patient. Diabetic neuropathy is one of the most common complications of diabetes mellitus (DM). Approximately 10-50% of diabetic patients have some degree of diabetic neuropathy 1, independent of the type of DM (45% with type 2 and 54% with type- 1, according to the Rochester Diabetic Neuropathy Study) 2. Diabetes is major risk factor for all entrapment neuropathies. Symmetric polyneuropathies start with paresthesias of feet and legs in typical length related pattern, the upper limb is rarely affected affected 3.

This is a length-dependent process, with the most distal portions of the longest nerves affected earliest. Thus, the earliest symptoms typically involve the toes, and then ascend. The arms are involved later, less often and less severely, also in a distal-to-proximal pattern. The term HbA1c refers to glycated haemoglobin. It develops when haemoglobin, a protein within red blood cells that carries oxygen throughout our body, joins with glucose in the blood, becoming 'glycated'. By measuring glycated haemoglobin (HbA1c), clinicians are able to get an overall picture of what our average blood sugar levels have been over a period of weeks/months. For people with diabetes this is important as the higher the HbA1c, the greater the risk of developing diabetes-related complications. Nerve conduction studies (NCS) are the most sensitive and specific DPN detection method 4, their use is recommended for quantitative confirmation DPN in clinical practice 5. Expanded access to NCS has the potential for early diagnosis and improved outcomes 6.

The patient was 20-years old female. She had type-I diabetes from past 10-yeras. She went for cataract surgery in both eyes five years back. She had no previous evidence of diabetic retinopathy. According to patient she was apparently alright 2-month back then she felt progressive weakness in lower limb and which start distally later on, not able to perform her daily routine work comfortably. Upper limb was normal and there was no report of felling of dizziness and vomiting. She had good appetite, usual sleep and abdomen was distended with normal bowel sound. She doesn’t visit physician regularly and had poor glycemic control (haemoglobin [HbA1C] 9.56%). Patient appears unwell.

Revealed the following: normal weight, blood pressure (110/70), heart rate (100-betas/min), respiratory rate (30-breath/min) and body temperature (38.40c). Family history includes, the patient’s mother, father and one brother was alive and well without any medical illness. She had no habit of smoking and drinking alcohol. The chest was normal along with normal heart and breathes sound.

Nerve conduction study (NCS) was carried out in a quiet room of neurophysiology laboratory at a temperature of 260 to 300C by using Neuroperfect-2000.  Skin temperatures were recorded and maintained above 32°C for all recordings. Nerve conduction studies were performed using standard techniques of supramaximal percutaneous stimulation and surface recording. The nerves (Common peroneal, posterior tibial for motor and sural for sensory) in lower limb were stimulated sub-cutaneous along their course where they are relatively superficial. The skin resistance was reduced by rubbing with spirit swab; the active electrode was placed over muscle belly and reference electrode over tendon. Amplitudes of compound muscle action potentials (CMAPs) were measured from baseline to negative peak and were reported for stimulation at distal and proximal sites; conduction velocity was measured in the lower limb. 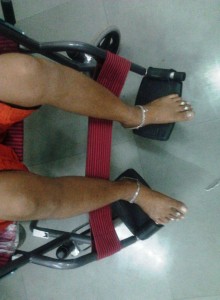 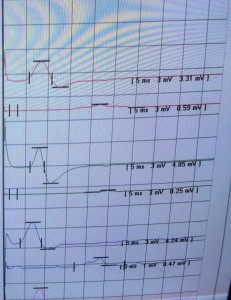 The Diabetes Control and Complications Trial found that intensive IDDM therapy reduced the frequency of neuropathy by 60% over 5 years 10. Aldose reductase inhibitors (ARIs) such as sorbinil, alrestatin and tolrestat have been studied as a means to prevent or improve polyneuropathy. They act by reducing the flux of glucose through the polyol pathway 1, 11.  Glycation of hemoglobin has been associated with cardiovascular disease, nephropathy and retinopathy in diabetes mellitus12. The Diabetes Control and Complications Trial (DCCT) established a clear link between impaired glycemic control and neuropathy 13. The longer duration and more poorly controlled diabetic may increase risk of neuropathy. Distal painful extremity parenthesias may occur after initiation of insulin therapy and achievement of normoglycemic state axonal nerve injury occurs as glucose is not available for nerve metabolism. However with normalization of blood glucose with insulin symptoms resolves. Intensive glycemic control slows the progression of DPN but does not prevent or arrest its development 14.

CONCLUSION: Electro-diagnostic techniques play an important role in the prognosis of diabetic neuropathy because timely intervention reduces disability and morbidity. The care of a diabetic neuropathy patient is challenging for the health care team. The acute progression of motor weakness and fatigue makes a profound effect on the patient's healthy life. Intensive glycemic control slows the progression of DPN but does not prevent or arrest its development.

ACKNOWLEDGEMENT: The authors gratefully acknowledge the people’s University for their financial support and Senior Laboratory Technician, Mr. Kamta Prasad Ahirwar for taking reading during nerve conduction study of the patient.