A COMPARATIVE ANALYSIS OF THE PHYTOCHEMICAL VARIABILITY OF ARBOREAL RUTACEAE MEMBERS

A COMPARATIVE ANALYSIS OF THE PHYTOCHEMICAL VARIABILITY OF ARBOREAL RUTACEAE MEMBERS

The accumulation tendencies of different classes of compounds within the related Rutaceae genera and species are well documented, considering different populations and plant individuals. Aegle marmelos is one species which has been largely exploited in India in indigenous systems of medicine as a potential herbal medicine for abdominal disorders. The species has been listed as Vulnerable due to its destructive harvest. In this paper, the secondary metabolites of Aegle marmelos are compared with two other arboreal species, Feronia limonia and Chloroxylon sweitenia. This is an unexploited field of research in Natural Products and Pharmacology which offers great potential to identify species which can be used as substitutes or alternates in indigenous medicine. Use of alternate species requires further understanding of the pharmacology; however, a profiling of the compounds of the three species reveals that the chemical composition is almost similar, the other members having increased levels of the metabolites, in addition to newer compounds, suggesting their use as alternatives.

INTRODUCTION: India and China are two of the largest countries in Asia, which have the richest arrays of registered and relatively well-known medicinal plants. Ancient Indian system of medicine known as Ayurveda employs medicines prepared mostly from wild plants. The roots, tubers, bulbs, leaves, fruits, flowers and barks of wild vegetation, depending on their active principle contents, are used for the preparation of medicines for different ailments. Indian rich biological diversity supported the system of medicine from times immemorial.

Aegle marmelos (L.) Corr. belongs to the family Rutaceae. The common names for the tree are Bael in Hindi, Bilwa in Sanskrit, Maredu in Telugu, Bil in Gujarati, Kumbala in Kannada, Vilvam in Tamil and Kuvalam in Malayalam.

It is a small to moderate sized deciduous tree, 20-25 feet in height and 3-4 feet in girth with straight sharp axillary thorns and trifoliate leaves. It is wild in the sub Himalayan tract, central and southern India. It is found all over the country. The root, stem and leaves have been shown to contain tannins.

Chloroxylon swietenia (Roxb) belongs to the family Rutaceae and is known as Bherul and Bhirra Giriya in Hindi and satinwood in English. It is a moderate sized tree, 9-15 m in height and 1.0-1.2 m in girth and is common in dry, deciduous forests throughout peninsular India. The decoction of the leaves is used as a lotion for ulcers and for healing abrasions of the skin and the smoke from burning leaves is used to drive ticks out of stables. The decoction of the bark is astringent and used in contusions and for painful joints. The leaves are also prescribed for rheumatism (Kirtikar et al., 1993). The plant contains an alkaloid, a powerful irritant, and causes dermatitis when applied to the skin. Previous reports on this plant occurring in different regions of India yielded various secondary metabolites such as mono and sesqui terpenoids, phenolic derivatives, alkaloids, and lignans (Bhide et al, 1977).  Senthil, 2003, reported that methanolic extract of the leaves exhibit analgesic activity than that of petroleum and ethyl acetate extracts of Chloroxylon swietenia.

Aegle marmelos has been widely exploited for its medicinal properties. To arrive at new species, which can be used as substitutes for the same, we have attempted to make a comparative profile of two Rutaceae members, namely Feronia elephantum and Chloroxylon sweitenia to assess the possibility of using them in medicinal preparations. The paper aims at understanding the metabolites available in Feronia elephantum and Chloroxylon sweitenia, and to compare them with Aegle.

Preparation of Leaf Extract: Leaves of Aegle marmelos, Feronia elephantum, Chloroxylon swietenia were collected from the Botanical Garden, IFGTB, Coimbatore, India, shade dried and powdered using a mixer grinder. Weighed amount of leaf powder was refluxed for 24 hrs in known volume of methanol. Filtered and the filtrate was air dried under RT. The extract was resuspended in a small volume of methanol.

TLC: The TLC Plates Silica gel 60 F254 coated was cut to the desired size. The plate was scanned under UV to avoid discrepancies. The samples were spotted 1cm apart and 1 cm from the base of the plate. The spots were air dried.

Terpenoids: The chamber was initially saturated with mobile phase Toluene: Ethyl Acetate: Formic Acid (9:0.9:0.1) for 20 mins following which the plate was developed to a distance of 1cm from the upper edge of the plate. The plate was then dried and examined under UV absorbance and UV fluorescence.

Flavonoids: The chamber was initially saturated with mobile phase (Ethyl Acetate: Glacial Acetic Acid: Formic Acid: Water (9:0.5:0.5:2) for 20 mins following which the plate was developed to a distance of 1cm from the upper edge of the plate. The plate was then dried and examined under UV absorbance and UV fluorescence.

Coumarins: The chamber was initially saturated with mobile phase (chloroform) for 20 mins following which the plate was developed to a distance of 1cm from the upper edge of the plate. The plate was then dried and examined under UV absorbance and UV fluorescence.

Alkaloids: The chamber was initially saturated with mobile phase (Toluene: Ethyl Acetate: Methanol: Ammonia (25%): (30:30:15:1) for 20 mins following which the plate was developed to a distance of 1cm from the upper edge of the plate. The plate was then dried and examined under UV absorbance and UV fluorescence.

Coumarins: Coumarins are secondary metabolites biosynthesized from p-coumaric acid (a phenylalanine derived). Besides the simple coumarins, linear or angular structured coumarins were also present. One common coumarin was detected in all the three species at an Rf of 0.076. In addition to the common coumarin of Rutaceae, C. swietenia had four new coumarins observed at UV fluorescence and absorbance.

Terpenoids: The role of terpenoids in plant metabolism is mainly as essential oils. Although it is of general sense that terpenoids represent a fundamental tool in pollinator’s attraction, guaranteeing a species reproduction. They also displayed a variety of biologic activities such as insecticide, antimicrobial and antiseptic (Figueiredo, 1992).One identical compound was observed in all the three species. Two compounds were identical in Aegle and C. sweitenia. C. sweitenia and Feronia had two identical compounds. About 17 compounds were observed to be distributed differentially among the three species.

Alkaloids: Three compounds were detected in all three species. One compound was identical in Feronia and C. sweitenia. Eight different alkaloids were observed under UV fluorescence and absorbance.

Flavonoids: Three compounds were detected in all three species. One compound was identical in Feronia and C. sweitenia. Eight different alkaloids were observed under UV fluorescence and absorbance.  Flavonoids represent one of the most important groups of phenolic natural products and, like coumarins, they are also biosynthesized from L-phenylalanine. These metabolites are found widely distributed in Rutaceae in seeds, fruits, flowers and leaves (Middleton, 1984). Among others, the suggested activities of flavonoids are: analgesic (Thirugnanasambanthan et al., 1990), sedative (Medina et al., 1997; Marder & Paladini, 2002), anti-inflammatory (Pathak et al., 1991).

Quantification of Metabolites: The total alkaloids estimated in the three species revealed C. swietenia to have highest concentration in % dry weight of tissue. The species showed alkaloids as the major compounds, characterized by their Rf values (Table 1 and Figure 1). This was followed by A. marmelos and Feronia. This was in contrast to the other secondary metabolites namely coumarins, terpenoids, flavanoids and phenols where Feronia had the highest concentration followed by A.marmelos. A.marmelos has been a major component of many medicinal preparations which might be due to the presence of higher alkaloid content. Phenolics which comprises the tannins and phenols was also found to be high in C. swietenia (Fig. 2). These compounds have been reported to responsible for the control of the intestinal disorders.

TABLE 1: THE DETAILS OF THE VARIOUS COMPOUND OBSERVED IN THE THREE SPECIES ARE DETAILED BELOW 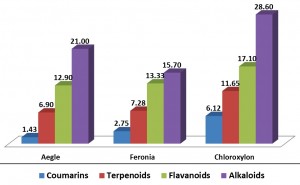 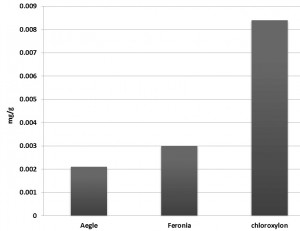 Determination of secondary metabolite content in the three revealed a similar chemical profile amongst them. Aegelin, rutacine, y-sitosterol, aegelemine and aegeline were identified from the leaves of Aegle marmelos in addition to coumarins like Marmin, marmesin, marmelosin, umbelliferone, skimmianine. Most compounds have been observed in the other two species also. Chemical similarity among the secondary metabolites of the three species could suitable justify for the substitution of C. sweiteina to be used in phytotherapeutic preparations as a substitute for A. marmelos in the folk medicine.

Feronia may not be an appropriate substitute as the species had lower alkaloid content. Further pharmacological evaluations are necessary to confirm this point of view.