INTRODUCTION: Embelia ribes Burm. f. is a threatened woody shrub belongs to the family Myrsinaceae, which is  found throughout India up to an altitude of 1600 m, from Central Himalaya to Konkan, Deccan, Western Ghats and South India. In ‘Ayurveda’, the plant is popularly known as Vidanga or Bashmak or Krimigna (Sanskrit); Baberangor Wawrung (Hindi); Vayuvilanga (Kannada) and it is used as one of the adjuvant in most of the drug preparations. The fruits contain embelin, quercitol, tannin, christembin, embolic acid, fatty ingredients, resinoid, volatile oil, vilangin.

Fruits of Embeliaro busta auct. Nonroxb. are used as adulterant to Embelia ribes Burm. f.. At some places it is used as substitute of E. ribes. These seeds are found in abundance and E. ribes now a day is considered to be in the red listed plants. E.robusta has similar properties to E. ribes. and chemical constituents like embelin etc. In Market, in the name of Vidang, both species are sold mostly in mixed form. At some places only Embeliaro busta auct. Nonroxb. is available in the name of Vidang. It is a rambling shrub or small tree, distributed from Ceylon to Malabar coast through Sylhet and Assam to Singapore 2. Both the two species are different in colour and size, E. ribes is black in colour, small and rounded whereas Embeliaro busta auct. Nonroxb. auct. is reddish brown in colour, big in size as compared to E. ribes and rounded. Both possess same actions according to modern literature. But researches on both species have not been done so far. So both species were selected for the comparative study. Moreover fruit of vidang is one of the ingredient of a paste formulation mentioned for local application in wound infections like fistula in ano, piles etc. 3, So to prove this activity of Vidang experimentally, in vitro study was carried out with both species of Vidang and following wound infection causative organisms. 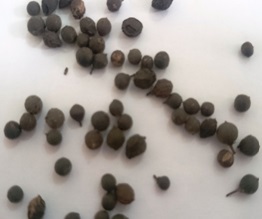 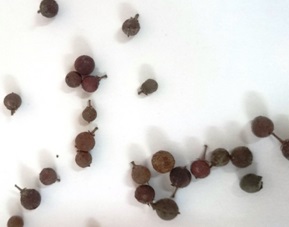 Preparation of extracts: Cold maceration method was used for preparing extracts. Macerated 10 g of the air dried drug, coarsely powdered, with 200 ml of solvent i.e. for preparing ethanol extract, ethanol solvent was used and for preparing aqueous extract, distilled water was used. Procedure was done for the specified strength in a closed flask for twenty-four hours, shaking frequently during six hours and allowed to stand for eighteen hours. Filtered rapidly, taking precautions against loss of solvent, evaporated the filtrate to dryness in a tarred flat bottomed shallow dish, and dried at 105 0C, to constant weight and weighed 4. The yield was 6.3% for ethanol extract of Embelia ribes Burm. f., 1.31% for aqueous extract of Embelia ribes Burm. f., 11.45% for ethanol extract of Embeliaro busta auct. Non roxb., 2.94% for aqueous extract of Embeliaro busta auct. Nonroxb.. Repeated the procedure for 5 times so as to collect the enough amount of extract required for antimicrobial activity. For carrying out antimicrobial activity, 10%, 20%, 30% concentrations of both ethanol and aqueous extracts were prepared by dissolving them in ethanol/water.

Micro-organisms: Bacterial strains selected for the study were Pseudomonas aeruginosa, Escherichia coli, Staphylococcus aureus, Klebsiellaaerogenes. Out of which Pseudomonas aeruginosa, Escherichia coli, Klebsiellaaerogenes are gram negative bacteria, whereas Staphylococcus aureus is gram positive bacteria. Reason for selecting these strains was, they are causative organism for surgical wound infections and mostly causes infections in piles, fistula in ano etc. The pathogenic strains of above bacteria were procured from ‘Institute of Microbial Technology’ (IMTECH), Chandigarh and the stock cultures maintainance and antibacterial study was done at ‘microbiology lab, Dravyaguna Vigyan Deptt, NIA’, Jaipur.

Revival of microbial cultures: Microbes collected from Institute of Microbial Technology were in dried form. It needed to be revived. Like all other living forms, micro-organisms need suitable nutrients and favorable environments for growth. A simple way to obtain bacteria is to grow them in a flask in broth medium.

Preparation of media and media plates: Muller-hington agar medium was taken for all pathogens. 38 gram of agar was dissolved in 1 litre of distilled water. Heated the agar with water at 100 0C till it becomes transparent, then kept it in hot air oven for 15 minutes. The sterilized media were poured in sterile petri dishes aseptically. The Agar (solidifying agent), which was added in a broth medium, hardens at it cools. After solidifying of agar plates (nearly about 15 to 20 minutes), they were kept inverted in incubator at 37 ºC for overnight for checking any contamination. The agar plates were ready.

Applied a microbial culture to the surface in a petri plate and spread them with cotton swab sticks. The prepared plates were then incubated in inverted position at 37 ºC for 24 hours. After incubation, we got the pure cultures. This procedure is termed as ‘Sub culturing’. In this way, frequent sub-culturing was done whenever required during antibacterial study.

Well diffusion method: For bactericidal assay in vitro, well diffusion method was adopted 5, because of reproducibility and precision. Wells (of about 4 mm diameter) were made on the plates with the help of sterile stainless steel borer. The different test organisms were proceeded separately using a sterile swab over previously sterilized culture medium plates. About 20-30µl different concentrations of plant solvent extracts were added using sterile syringe into the wells and allowed to diffuse at room temperature for 2hrs.Control experiments comprising inoculums without plant extract were set up. The plates were incubated at 37 °C for 48 hours for bacterial pathogens. The zone of inhibition were measured around sterilized wells (4 mm in diameter). The 4 readings were taken in different planes, and then the mean was calculated.

IC50: The half maximal inhibitory concentration (IC50) is a measure of the effectiveness of a substance in inhibiting a specific biological or biochemical function. This quantitative measure indicates how much of a particular drug or other substance (inhibitor) is needed to inhibit a given biological process (or component of a process, i.e. an enzyme, cell, cell receptor or microorganism) by half. The IC50 of a drug can be determined by constructing a dose-response curve and examining the effect of different concentrations of antagonist on reversing agonist activity. IC50 values can be calculated for a given antagonist by determining the concentration needed to inhibit half of the maximum biological response of the agonist. IC50 values can be used to compare the potency of two antagonists 7. In general, the higher the concentration of inhibitor, the more agonist activity will be lowered. IC50 value increases as agonist concentration increases.

Zone of Inhibition in mm: 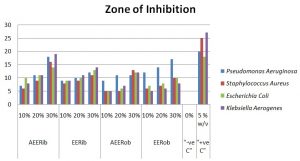 GRAPH 1: SHOWING ZONE OF INHIBITION OF TEST SAMPLES WITH POSITIVE AND NEGATIVE CONTROLS WHERE C” STANDS FOR CONTROL GROUP 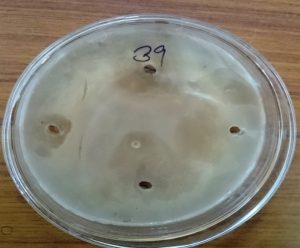 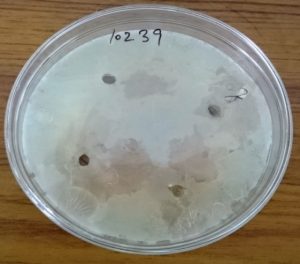 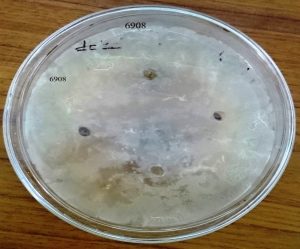 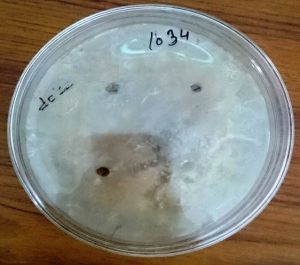 FIG. 3: ZONE OF INHIBITION OF + VE AND -VE CONTROL AGAINST FOUR STRAINS OF BACTERIA 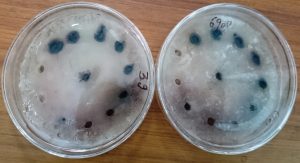 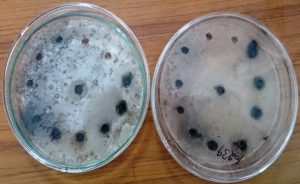 FIG. 4: ZONE OF INHIBITION OF TEST GROUPS AGAINST FOUR DIFFERENT STRAINS OF BACTERIA 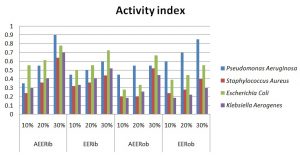 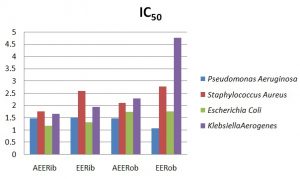 CONFLICTS OF INTEREST STATEMENT: There are no conflicts of interest.