ABSTRACT: Background: Prevention of recurrence is important for patients with ischemic stroke. The purpose of the study was to compare the effectiveness of two antiplatelet regimens-aspirin plus clopidogrel versus aspirin plus cilostazol in early secondary stroke prevention using National Institutes of Health Stroke Scale (NIHSS) Scores. Methods: In this study, we randomly assigned 30 patients to receive aspirin plus clopidogrel once daily or to receive aspirin once daily plus cilostazol twice daily. The patients were followed up for a period of three months, and the NIHSS scores were taken on admission, and every month thereafter. After completion of the study duration, the scores of both the groups were compared, and results were interpreted. Results and Discussion: More number of patients were found to be in the age group of 60- 70 years with a mean age of 63 years. In both the groups, the percentage of females was higher than that of males. Hypertension (80%) and diabetes mellitus (56.6%) appeared to be the major risk factors. The percentage of death rate in the aspirin/clopidogrel group (20.25%) was higher than that of the aspirin/cilostazol group (6.75%). Recurrent stroke and vascular events did not occur in any group. Conclusion: Aspirin/cilostazol significantly reduced the risk of early stroke recurrence based on NIHSS scores. Hence, it can be considered as a supplement to aspirin or an alternative to clopidogrel in dual therapy for secondary prevention of ischemic stroke. There is no evidence that either of the two antiplatelet regimens was superior to the other in the prevention of recurrent stroke.

INTRODUCTION: Stroke is a leading cause of death and disability in developing countries. It is the third commonest cause of death worldwide, following coronary heart disease (CHD) and cancer of all types. Contrary to Caucasians, Asians have a higher prevalence of stroke than CHD. Among the Asians, the number of deaths from stroke is three times higher than that of CHD 1, 2.

According to the American Heart Association, 88% of strokes are ischemic, and the remaining 12% are hemorrhagic 3. Ischemic strokes are due to embolic occlusion of a cerebral artery resulting in the dramatic onset of focal neurologic symptoms 4. The risk of ischemic stroke could be attributed to modifiable risk factors (such as hypertension, cardiac disease, diabetes, obesity, hyperlipidemia, and renal dysfunction), and behavioral risk factors (smoking, sedentary lifestyle and an unhealthy diet) 5-7.

Ischemic stroke patients are always at a higher risk of recurrence 7. Causes of recurrent stroke are not well substantiated but these risk factors (hypertension, cardiac disease, and diabetes in particular) are found to be associated with high chances of stroke recurrence 8, 9.

Necessitous pharmacological therapy reduces this menace by 80%. As platelets play a key role in the formation of atheromatous clots, various anti-platelet drugs have been used to improve outcomes in both acute strokes and in secondary stroke prevention 10-13. Aspirin, in combination with clopidogrel or extended-release dipyridamole (ERD) is the first-line therapy in secondary stroke prevention. Both these combinations are associated with bleeding risk. When considering antiplatelet therapy, a balance between reducing recurrent stroke and major bleeding needs to be considered. Recent studies have shown promising effects of cilostazol in reduction of stroke recurrence, post-stroke intra-cranial hemorrhage, and extracranial bleeding 14-19.  Cilostazol, a selective phospho-diesterase III inhibitor (PDE-III), increases intracellular cyclic adenosine monophosphate (cAMP) in platelets and vascular smooth muscle resulting in anti-aggregatory and vasodilator effects 20. Nakamura et al., demonstrated that aspirin plus cilostazol combination resulted in a decreased neurological deterioration in comparison to aspirin alone 22. Additionally, few bleeding events were reported with cilostazol as compared to aspirin plus clopidogrel 23.

To assess the neurological status at an early stage in the course of the disease, to determine the effect of therapeutic agents used and to predict the outcome, impairment scales are used. National Institutes of Health Stroke Scale (NIHSS) is the highly recommended scale among various scales for quantification of neurological deficits. This scale grades motor function, speech, consciousness, facial paresis, and sensation. Irrespective of the patient’s conscious state, the scale takes into account all stroke-related impairments 24, 25.

Ethical Approval for Research Involving Human Participants and/or Animals: This study was approved by Institutional Review Board (IRB), Deccan College of Medical Sciences and Allied Hospitals, Hyderabad (IEC No: 2017/19/004) and all patients were required to sign an informed consent form before enrollment.

Study Protocol: At the beginning of this project, a study protocol was drafted following the approval from the Institutional Review Board (IRB) of Deccan College of Medical Sciences and Allied Hospitals, Hyderabad.

Eligibility Criteria: The inclusion criteria were a newly diagnosed non-cardioembolic ischemic stroke, defined by symptoms persisting for more than 24 h or symptoms of a shorter duration confirmed with evidence of recent brain infarction on a computed tomographic (CT) scan or magnetic resonance imaging (MRI); an age of 40 years or older; both male and female gender. Patients were excluded if they were younger (less than 40 years) or had a hemorrhagic / cardioembolic stroke/ recurrent stroke or if they had any contraindications to one of the antiplatelet agents. Pregnant or lactating females and cancer patients were also excluded.

Study Design: The study was conducted at Princess Esra Hospital. A total of 30 patients meeting the enrollment criteria were assigned to one of the two treatment groups. Group 1 included patients taking aspirin plus clopidogrel (n=15) and Group 2 comprised patients on aspirin plus cilostazol (n=15). Eligible patients who gave consent were assigned to receive aspirin (150 mg) plus clopidogrel (75 mg) once daily or aspirin (150 mg) once daily plus cilostazol (50 mg) twice daily.

Data Collection: We included patients with ischemic stroke, as diagnosed by CT or MRI. After the inclusion of patients, we extracted general information of the patients (age, gender, medical history, personal history) laboratory investigations and therapeutic schedule.

By using NIH Stroke Scale, we evaluated the patients for 11 different abilities on admission into the hospital and then at 1, 2 and 3 months thereafter. The different abilities were level of consciousness, best gaze, visual, facial palsy, motor arm, motor leg, limb ataxia, sensory, language, dysarthria and extinction, and inattention. A number between 0 and 4 was scored for each ability, 0 being normal functioning and 4 being completely impaired. The patient’s score was finally calculated by adding the number for each element of the scale. Scores ranged from 0 to 42, with higher scores indicating greater deficits.

Outcome Events: The primary outcome was a better reduction in the NIHSS score, and the secondary outcome was to achieve safer anti-platelet therapy to prevent adverse drug reactions.

Statistical Analysis: No patient withdrew between the enrollment and the administration of first dose study medications. We compared the baseline characteristics of the patients in the two study groups. Age distribution was calculated by independent t-test, whereas gender, comorbidities distribution, mortality rate post-treatment were calculated by the Chi square test.

Reduction in NIHSS scores before and after treatment was calculated by repeated measures one-way ANOVA. In addition, we correlated to age and baseline NIHSS scores of two groups with correlation analysis. All tests were two-tailed, and a p-value of less than 0.05 was considered significant since the CI was 95%. All statistical analyses were performed with the use of SPSS software, version 17.

RESULTS:  During December 2017 to May 2018, a total of 63 patients were screened, and 30 were enrolled in the study, with 15 assigned to each group. The most common reasons for exclusion were hemorrhagic strokes, recurrent strokes, and cardioembolic strokes.

The median age was 63 years (SD ± 12.92), and 63.3% of the patients were women. The groups were well balanced regarding baseline characteristics in Table 1. There were no significant differences between the treatment groups for any characteristic.

TABLE 2: NIHSS SCORE BEFORE AND AFTER TREATMENT IN ASPIRIN/CLOPIDOGREL PATIENTS

TABLE 3: NIHSS SCORE BEFORE AND AFTER TREATMENT IN ASPIRIN/CILOSTAZOL PATIENTS 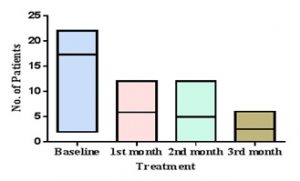 FIG. 1: NIHSS SCORE BEFORE AND AFTER TREATMENT IN ASPIRIN/CLOPIDOGREL PATIENTS 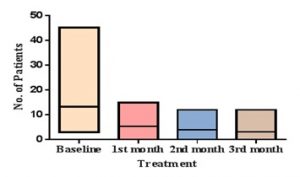 FIG. 2: NIHSS SCORE BEFORE AND AFTER TREATMENT IN ASPIRIN/CILOSTAZOL PATIENTS 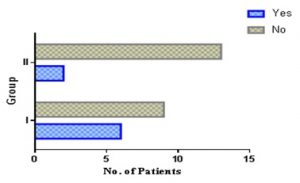 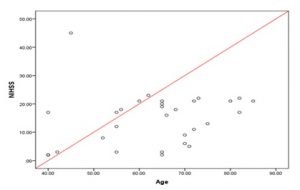 DISCUSSION: In this study, we were able to compare two short term antiplatelet regimens in 30 patients with first-time ischemic stroke. Results from this study indicated that the new combination of aspirin/cilostazol therapy was associated with the prevention of early recurrence of stroke.

But no conclusion on the superiority can be established due to differences in the severity of stroke between the groups. Additionally, a higher rate of dropouts in aspirin/clopidogrel group also lead to differences in the results. The drop out cases stated a switch to alternate therapies (Homeopathy/ Unani) as their reason for the discontinuation of the study. Also, the effects of dual therapies might be different in the long-term prevention of stroke.

CONCLUSION: In conclusion, we found that both aspirin / clopidogrel and aspirin/cilostazol combinations were able to prevent early recurrence of stroke, based on NIHSS scores in spite of the limitations of a small sample and short duration of our study. Our results suggest that aspirin/ cilostazol has similar efficacy in the prevention of early recurrent stroke during the first three months after starting treatment. Hence, it can be considered as a supplement to aspirin or an alternative to clopidogrel in dual therapy for secondary prevention of ischemic stroke. Our study might serve as a pilot study for further studies. More trials, with larger sample size are needed to determine whether long-term use of aspirin and cilostazol is better when compared to aspirin and clopidogrel combination.

ACKNOWLEDGEMENT: We thank all the patients for participating in our study and the Department of Neurology, Princess Esra Hospital, for allowing us to access the individual patient data. We also thank Mr. Phani and Dr. Dhivya K. for providing stastistical analysis. We thank Dr. Nematullah Khan for his help and comments on the manuscript.

CONFLICTS OF INTEREST: No potential conflict of interest relevant to this article was reported.