INTRODUCTION: Ropinirole hydrochloride (RH), a drug of choice for the treatment of Parkinson's disease and restless leg syndrome. The oral bioavailability is 50% since it is undergone extensive first-pass metabolism 1.

It is a suitable drug candidate to be formulated as a transdermal drug delivery system. RH belongs to BCS III drug having high solubility with low permeability and polar in nature. Due to this characteristic of the drug, in the present study, an attempt was made to enhance its permeation by using several permeation enhancers of a different mechanism.

Animals: Albino rat skin was used for the ex-vivo skin permeation experiment. The study protocol has been submitted and obtained approval from the Institutional Animal Ethics Committee, Government College of Pharmacy, Bengaluru. (Reference No.: DCD/GCP/20/E.C/ADM/2017-2018). The albino rats, either sex weighing 100–200 g (age 8–12 weeks) were received from the animal house, Department of Pharmacology, Government College of Pharmacy. Before conducting the experiment, the animals were fed food and water ad libitum.

Melting Point: The melting point of RH was determined in the MR-VIS visual melting range apparatus (Labindia Analytical Instruments Pvt. Ltd., India). The drug sample was filled in three capillary tubes and placed over a sample holder, measured the melting point by setting the temperature readability of 0.1 °C, at a flow rate of 10 °C/min. It was expressed in terms of °C.

Solubility: The saturated solutions of RH in different solvents were prepared by adding an excess amount of drug to the fixed volume of solvents. The saturated solutions were sonicated in a temperature-controlled sonicator (Serwell instruments, Bangalore) for 24 h at 25 ± 0.5 °C. Keep the solution for 2 h at room temperature to reach equilibrium 8. Mix, filter the solution through Whatman nylon membrane (0.45 µm pore size). After suitable dilutions with the same solvent, the amount of drug present in each solvent was determined using HPLC (n=3). The instrument used for the estimation of drug solubility in different solvents was composed of Shimadzu-LC-20AD, prominence liquid chromatography (Shimadzu Corporation, Japan) equipped with LC solution software using a reverse-phase C-18 column (Gemini NX ODS, Phenomenex) 15 cm × 4.6 mm, 5 µm particle size eluted with a mobile phase composing of 70:30 v/v ratio of methanol: acetonitrile at a flow rate of 0.7 ml/min, UV detection wavelength 250 nm and injection volume 20 μl. The retention time for RH was found to be 2.7 min. The developed method was precise, with lower than 2 %RSD, and the calibration curve was linear over a concentration range of 2.5-160 µg/ml with r2 of 1. The detection and quantification limits were found to be 0.045 µg/ml and 0.15 µg/ml, respectively 9.

Stability of RH: The stability of RH in receptor medium (PBS pH 7.4) was studied by preparing a final concentration of 20 µg/ml of RH solution by making a suitable dilution using same solvent and the solution was stored in room temperature up to 48 h.

The prepared solution was withdrawn and analyzed initially and after 24, 48 h by using HPLC. Each study was conducted in triplicate. The amount of drug present in the receptor medium was determined, and the result was expressed in percentage of RH remaining with time 10.

Apparent Partition Coefficient: The apparent partition coefficient of RH was determined in n-octanol and PBS pH 7.4 by shake-flask method 11. The pre-saturation was achieved by thorough mixing of an equal volume of n-octanol and PBS pH 7.4 for 10 min at room temperature in a 250 ml separating funnel, allowed the content to separate into an immiscible layer. 10 mg of drug was added, and it was shaken for 45 min and allowed to settle for 1 h into two distinct phases. Both the phases were collected; centrifuged at 1000 rpm for 5 min, and the solution was filtered through Whatman nylon membrane (0.45 µm pore size). The concentration of the drugs in each phase was determined by making suitable dilutions and analyzed by HPLC as mentioned in the solubility determination. The apparent partition coefficient of RH was calculated by the following formula: Partition coefficient =log (Co/Ca). Where Co is the concentration of RH in the organic phase, and Ca is the concentration of RH in the aqueous phase.

Fourier Transform Infrared (FTIR) Spectro-scopy: Shimadzu IR Affinity-1S ATR-FTIR (Shimadzu Corporation, Japan) instrument was used to record the FTIR spectrum of RH by placing the sample directly on the germanium prism, and IR spectra were recorded in the scanning range of 600 to 4000/cm 12.

Differential Scanning Calorimetry (DSC): The thermal behavior of the drug was carried out by using the DSC-8000 (PerkinElmer Inc. Germany) instrument. An approximately 1.5 mg of drug was placed in aluminum pans, and the pans were closed by crimping the lids. The filled aluminum and empty sealed pan were placed in a sample holder. The empty pan acts as a reference, covering the temperature range of 30-350 °C at a heat flow of 10 °C/min under nitrogen purging.

Powder X-ray Diffraction (PXRD): The PXRD pattern of the pure drug was recorded in PANalytical X'Pert’ Powder X-Ray Diffractometer (PANalytical B.V. Lelyweg 1, Netherlands). The drug sample was exposed to Cu K-α-1 radiation, 40kV voltage, 30mA current and scanned from 2 to 60° 2θ, at a scan step size (2θ) of 0.0300 and a scan step time of 0.8000 s, in order to confirm nature, i.e., crystalline or amorphous 12.

Ex-vivo Skin Permeation Experiment: The albino rat used for this experiment was anesthetized by using chloroform, and long hairs were cut and shaved with the help of scissors and scalp vein. The full thickness of the abdominal skin was removed and placed in hot distilled water at 55 °C for 30 sec to remove adhered subcutaneous fat then dipped into fresh distilled water after the skin was thoroughly inspected visually for its integrity and stored at -20 °C until it is used 13. On the day of the experiment, the rat skin was thawed to room temperature, cut into the required surface area and immersed in PBS pH 7.4 for 30 min, which was used as a receptor medium.

The ex-vivo skin permeation experiment was carried out in a modified Franz-diffusion cell with a diffusion surface area of 3.462 cm2 through rat abdominal skin used as a barrier. The receptor compartment was filled with a PBS pH 7.4. The rat skin was clamped between the receptor and donor compartment considering the stratum corneum facing the donor. The donor compartment contains a saturated solution of 1.0% w/v drug alone and with 5% w/v concentration of permeation enhancers used. To achieve the sink conditions the receptor medium in the receptor compartment was stirred at 100 rpm with magnetic beads on a magnetic stirrer and maintained at 37 ± 0.5 °C. At predetermined time intervals of 1, 2, 3, 4, 5, 6, 7, 8, and 12 h, 1.5 ml of aliquots were withdrawn from the sampling port of the receptor compartment and replaced immediately with an equal volume of fresh receptor medium. During sampling care was taken to avoid any bubble formation as the trapped air may reduce the permeation area. After appropriate dilution, the samples were analyzed by using HPLC, as mentioned in the solubility determination to determine the content of RH (n=3).

Melting Point: The melting point RH was found to be 247.7 °C, which complied with the available data in the standard literature 15 and also complied with official standard data that is in the range of 243 °C to 250 °C. 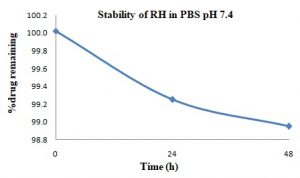 Apparent Partition Coefficient: The partition coefficient values for RH in n-octanol and PBS pH 7.4 system was found to be -0.468 ± 0.97. The reported value is within the limits of -1 to 4 as required for the transdermal permeation 17. The obtained value suggested that the drug possesses enough lipophilic property, which meets the requirements to formulate it into a transdermal formulation. 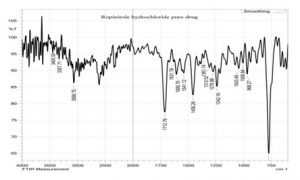 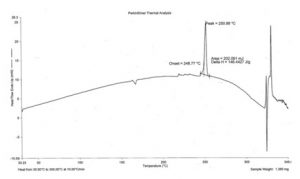 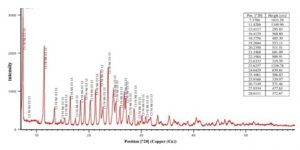 Based on the above results obtained from the thermal analysis (melting point and DSC), FTIR, and PXRD techniques, it is clearly indicated that the received pure drug was authentified as RH.

The mechanism of hyaluronidase as a permeation enhancer was by acting as a spreading factor due to its decomposition into hyaluronic acid 25, lipophilic domains in hyaluronic acid react with stratum corneum to concert α-helical structure to a β-sheet of keratin in the stratum corneum thereby disordering the lipid bilayers, and it decreasing the viscosity of the body fluids thereby increasing the permeability of the connective tissue 26, and these mechanisms were not predominant over the mechanism of IPM. Hence, IPM was considered to be the best permeation enhancer for transdermal delivery of RH.

TABLE 1: EFFECT OF PERMEATION ENHANCERS ON THE PERMEATION PARAMETERS OF RH THROUGH RAT ABDOMINAL SKIN 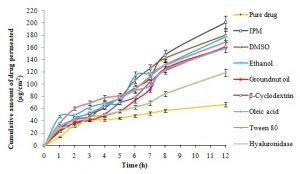 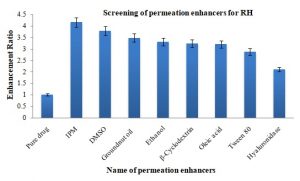