ABSTRACT: Background:  Kapikacchu (Mucuna pruriens (L.) DC.) belonging to the family Fabaceae is commonly known as Velvet bean, Cowitch, Cowhage in English and Kawaanch, Kavach in Hindi. It is mainly distributed in Asia, Africa, Pacific Islands and the United State. Kapikacchu is very famous plant for its aphrodisiac effect. Traditionally it is being used as a potent antiparkinsonian, anti-inflammatory, aphrodisiac and nervine tonic. In market two types of seeds (black and white) are available and are being used simultaneously in the name of Kapikacchu. No data is yet available in context of the comparative pharmacognosy of black and white seeds of Kapikacchu. The aim of present article is to put forward the comparative pharmacognostical analysis of both types of Kapikacchu seeds. Methods: Macroscopic evaluation, microscopic evaluation, physicochemical evaluation, extractive values, phytochemical analysis, T.L.C. study were carried out using both varieties of Kapikacchu seeds and comparative data was obtained. Results: Data pertaining to the above cited evaluations was recorded for both varieties of seeds of Kapikacchu. Conclusion: All the values hence obtained were subjected to comparison with their corresponding standard values as mentioned in API. It was observed that all the values were under their normal range.

INTRODUCTION: Kapikacchu (Mucuna pruriens (L.) DC.) is a very well-known drug used in Ayurvedic classics. It is used as Balya, Vrishya, Brihankaraka and for Vata shaman 1. It is described as Vrishya Dravya in Samhita 2 as well as Nighantus 1. Kapikachhu seeds contain L-Dopa which is indicated in Parkinson’s disease and used as aphrodisiac. L-Dopa is precursor of the neurotransmitter Dopamine. In market two types of Kapikacchu seeds (black and white) are available and are being used simultaneously in the name of Kapikacchu.

These are different germplasms of cultivated variety of kapikacchu and botanically both are Mucuna pruriens var. utilis.

Mucuna pruriens is a tropical twining herb commonly known as velvet bean belongs to the family Fabaceae. It is commonly known as Cowitch, Cowhage in English and Kawaanch, Kavach in Hindi. The plant is famous for the extreme itchiness it produces on contact, particularly with the young foliage and the seed pods due to the presence of 5- hydroxytryptamine (5-HT) 3.

It is grown predominantly in Asia, Africa, and many parts of America 4. The beans of the M. pruriens are known to produce the unusual non protein amino acid L-dopa, a potent neurotransmitter.

From the ancient times Kapikacchu has been used in Ayurvedic medicine for the treatment of Parkinson's disease associated with progressive degeneration of dopaminergic neurons in specific areas in the brain which is a common age-related neurodegenerative disorder. But the researches discover that it is also used in many other diseases such as for treating arthritis, anxiety, cancer, cough, diarrhoea, dysentery, diabetes, dysmenorrhea, delirium, gonorrhoea, gout, impotence, muscular pain, parasitic infections, rheumatic disorders, as analgesic and antipyretic, to induce vomiting, to treat snakebite and scorpion stings, sexual debility, sterility, tuberculosis and its direct application on skin can help to stimulate surface blood flow in conditions that involve paralysis. In India, it is considered an aphrodisiac, diuretic, nerve tonic and uterine stimulant. In Central America, it is known as Nescafe as the seeds are roasted and ground to make a coffee substitute for decades 5.

MATERIALS AND METHODS: We took both types of Kapikacchu seeds (black and white) from field after proper identification. The plant material was identified and authenticated from Botany Department, University of Rajasthan, Jaipur.

The collected drugs i.e (black and white) seeds of Kapikacchu were dried and studied organoleptically, with naked eye and magnifying lens, with the help of Pharmacognostical procedure i.e. Appearance, size, shape, colour, and odour and findings were recorded.

(2) Microscopic study: All fresh samples were cut in very thin slices with the help of blade and were dipped in water for some time to make them soften. After that staining was done with safaranine. After staining, mounting was done on microslides. In this process, sections were transferred on slides & glycerine was added on sections. Then coverslip was put on sections, excess water was wiped out & then the slides were observed in microscope & photos were taken.

(3) Determination of Moisture Content: Moisture content was determined by placing weighed sample of 5gm of drug in oven at 105ºC for 5 hours, and weight of sample was calculated for every 30 minutes, until the weight of the sample came out to be constant, no variation of weight was recorded. This sample was allowed to cool at room temperature in a desiccator for 1 hour before weighing 6.

(4) Determination of pH: The pH value of an aqueous liquid may be defined as the common reciprocal of the hydrogen ion concentration expressed in gram per litre. It practically means the quantitative indication of the acidity or basic nature of a solution. pH value was calculated as per the methods mentioned in the Ayurveda Pharmacopeia of India 7.

Determination of Alcohol Soluble Extractive: Alcohol-soluble extractive value was calculated as per the methods mentioned in the Ayurveda Pharmacopeia of India 8.

Determination of Water Soluble Extractive: Procedure was same as that of alcohol soluble extractive value and it was proceeded using distilled water instead of alcohol.

(6) Determination of Total Ash: The total ash method is designed to measure the total amount of material remaining after ignition. This includes both physiological ash which is derived from the plant tissue itself and non-physiological ash which is the residue of the extraneous matter (e.g. sand and soil) adhering to plant surface. Total ash value was calculated as per the methods mentioned in the Ayurveda Pharmacopeia of India 9.

(7) Determination of Acid Insoluble Ash: Acid insoluble ash value was calculated as per the methods mentioned in the Ayurveda Pharmacopeia of India 10.

(8) Determination of Water Soluble Ash: Water soluble ash value was calculated as per the methods mentioned in the Ayurveda Pharmacopeia of India11.

Arsenic compound: 10 mg of ash was taken in a test tube and dissolved while gently heating with 5 ml of slightly acidic water and hypophosphorus reagent was added, a brown precipitate was formed.

Nickel Compound: Dissolved 20 mg of the ash of the drug in about 0.5 ml of water, acidified with a few drops of dilute hydrochloric acid, and then Added drop by drop a dilute solution of sodium hydroxide. A blue precipitate is formed which turns green on warming.

Lead Compound: Dissolved 0.1 gm of the substance being examined in 1ml of dilute acetic acid or use 1ml of the prescribed solution. Added 2 ml of potassium chromate solution; a yellow precipitate insoluble in 2ml of 10M sodium hydroxide was produced.

Mercury Compound: Dissolved 20 to 25 mg of the ash of the drug in 1 ml of distilled water and added potassium iodide solution. A red precipitate is formed that dissolved in an excess of the reagent.

Silver Compound: Dissolved 20 to 25 mg of the drug in 2-3 ml of distilled water and added 0.2 ml of 7 M hydrochloric acid. A curd white precipitate is formed that is soluble in 3 ml of 6 M ammonia. Added a few drops of a 10% W/V aqueous solution of potassium iodide a yellow precipitate is developed.

Zinc Compound: Dissolved 20 to 25 mg of the ash in 2 to 3 ml of distilled water and added 0.2 ml of 10 M sodium hydroxide. A white precipitate is formed which is dissolved in 2 ml of 10 M sodium hydroxide solution. Added about 5 ml of 2 M ammonium chloride followed by 0.1 ml of sodium sulphide solution. A flocculent, white precipitate is produced.

(11) Chromatography 13: Thin-layer chromatography is a technique in which a solute undergoes distribution between two phases, a stationary phase acting through adsorption and a mobile phase in the form of a liquid. The adsorbent is a relatively thin, uniform layer of dry finely powdered material applied to a glass, plastic or metal sheet or plate. Glass plates are most commonly used. Separation may also be achieved on the basis of partition or a combination of partition and adsorption, depending on the particular type of support, its preparation and its use with different solvent.

Identification can be effected by observation of spots of identical Rf value and about equal magnitude obtained, respectively, with an unknown and a reference sample chromatographed on the same plate. A visual comparison of the size and intensity of the spots usually serves for semi-quantitative estimation.

Activation of pre-coated Silica gel 60 F254: Plates were dried in hot oven at 1050 C for one and half hour.

Visualization: Under day light, under Iodine vapor and under Dragondroff’s reagent. 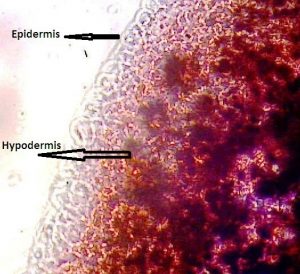 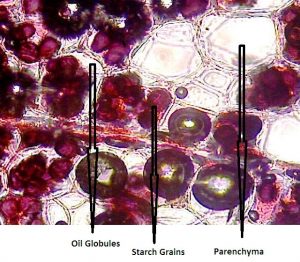 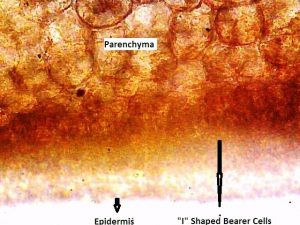 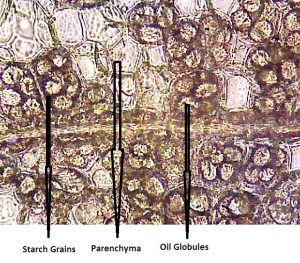 pH is a method  of quantity analysis of  acidic and basic nature of drug.  pH of black seeds was 5.05 and of white seeds was 5.09. Both are acidic in nature.

CONCLUSION: T.S. of black seeds and white seeds show presence of parenchyma, starch grains and oil globules. Moisture content of both seeds (black and white) was closely same. No significant difference was observed in total Ash values of powders. Extractive values also showed little variation. The alcohol soluble extractive value of white seeds was more than black seeds powder. Water soluble extractive values were approx. same for both samples. All the values were found similar to the standard values mentioned in API.

Heavy metal like Lead, Mercury, Silver, Arsenic, Nickel, Cobalt and Zinc were absent in both the samples.

CONFLICTS OF INTEREST STATEMENT: There are no conflicts of interest.