ABSTRACT: Bromocriptine mesylate quick release formulation has recently been approved by FDA for the treatment of diabetes mellitus. Till now it has been mainly known for its use in Parkinsonism and for suppression of lactation. Present study evaluates and compares the antihyperglycemic effect of the combination of bromocriptine and metformin with either of the two drugs taken alone. For this fasting blood sugar level of all the groups were measured on day 1,7,14 and 21 of treatment. In this study all the three treatment groups was found to have significant (P<0.05) blood glucose lowering effect. Fall in fasting blood was less in bromocriptine treated group as compared to groups treated with metformin and those treated with combination of the two. It is concluded that hypoglycemic effect of combination of metformin and bromocriptine is better than either of the two drugs taken alone. This may be due to potentiation or synergism between metformin and bromocriptine. Further studies are required to prove that bromocriptine has constantly significant hypoglycemic effect with better safety profile than the earlier drugs.

INTRODUCTION:Diabetes mellitus is a leading cause of morbidity and mortality among Indian population.  The Diabetes Atlas published by the International Diabetes Federation shows there are currently over 40 million diabetic patients in India 1. The International Diabetes Federation (IDF) reports a projected prevalence of 70 million patients in India by the year 2025 and the World Health Organization (WHO) estimates that India will have 80 million cases of diabetes by 2030 2. This places India second only to China in terms of number of people living with diabetes 3.

An ideal oral treatment for diabetes would be a drug that not only controls the glucose level but also delays the development of ESRD and other complications of diabetes. Unfortunately, among the currently available drugs, the choice is very limited. Alloxan monohydrate is known for its selective pancreatic islet beta cell cytotoxicity and has been extensively used to induce diabetes mellitus in animals 6, 7. The quick release formulation of bromocriptine mesylate has been approved by FDA in May 2009 for the treatment of type 2 diabetes in adults as an adjunct to diet and exercise to improve glycemic control8,9.

The mechanism by which bromocriptine improves hyperglycemia still not very clear. The idea of using bromocriptine for the treatment of type 2 diabetes came while studying the metabolism of migrating birds. It was noted that their hypothalamus have the ability to develop seasonal insulin resistance by controlling their metabolism10. Reduction in hypothalamic dopaminergic activity and increased noradrenergic activity  in the CNS results in increased fat stores and decreased insulin sensitivity resulting in obesity and insulin resistance and glucose intolerance, the pathology most often seen in patient with diabetes mellitus 11 (see figure 1).

Bromocriptine is a sympatholytic dopamine D2 receptor agonist 12. It is unique in that it doesnot have a specific receptor that mediates its action on glucose and lipid metabolism. Its effects are mediated via resetting of dopaminergic and sympathetic tone within the CNS 13. Many studies have reported the finding that systemic and intracerebral  bromocriptine administration in insulin-resistant animals decreases the  elevated noradrenergic and serotonergic levels in the ventromedial hypothalamus (measured in vivo by microdialysis) with a resultant decline in hepatic glucose production/gluconeogenesis, reduced adipose tissue lipolysis, and improved insulin sensitivity 14, 15.

Systemic bromocriptine also inhibits responsiveness of ventromedial hypothalamus to norepinephrine, and conversely, norepinephrine infusion into the ventromedial hypothalamus antagonizes the beneficial effect of bromocriptine on glucose tolerance and insulin sensitivity 16. Consistent with these observations in animals, systemic bromocriptine administration improves glycemic control and dyslipidemia without change in body weight in type 2 diabetic and obese nondiabetic humans 17. The proposed mechanism of action of bromocriptine to improve glucose tolerance is summarized in adjacent figure. 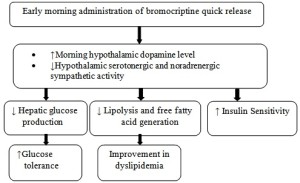 MATERIAL AND METHODS: Healthy male wistar rats weighing between 150-225 grams were taken for the present study. The animals were kept in clean and dry cages, with 12 h: 12 h light-dark cycle at room temperature and humidity. They were acclimatized to the available housing condition and were fed with diet consisting of soaked black gram (Kala Chana) and water was given ad libitum. Arrangements were made to ensure regular cleaning of cages and disposal of excreta and urine. The cages were floored with a layer of saw dust for absorption of urine of rats. This was done because after induction of diabetes by alloxan there was excess of urination. The whole experiment was conducted in accordance with ethical guidelines approved by Institutional Animal Ethics Committee (IAEC) of Rajendra Institute of Medical Sciences, Ranchi, Jharkhand, India.

Induction of diabetes mellitus: Male Wistar rats were acclimatized for one week before the initiation of the study. Leaving aside six rats for normal control group, diabetes was induced in overnight fasted rats by single intraperitoneal injection of freshly prepared 1% alloxan monohydrate in sterile normal saline in a dose of 120 mg/kg body weight. After this, they were provided with free access to water and 5% glucose solution overnight to overcome the drug induced hypoglycemia.

The fasting blood glucose level was determined after 72 hours of alloxan injection. The rats having blood glucose levels above 250 mg/dl were used for the study. The diabetic animals were allowed free access to tap water, normal laboratory diet, and were maintained at room temperature in their cages.

Total thirty animals were used for the study. First group having six rats were kept nondiabetic. After confirmation of diabetes and stabilization of fasting blood sugar i.e. on 3rd day the diabetic rats were divided into four groups with six rats in each group. Drugs were administered from 4th day and this was considered as day one of the treatment. All the treatments were carried out for a period of 21 days. The fasting blood samples were collected before the induction of diabetes as well as on days 1, 7, 14 and 21 to determine the glucose level by Glucometer.

The details of groups were as follows;

Effect of alloxan on normal rats: As shown in table 1, alloxan treated rats show significant (P<0.05) high value of fasting blood sugar in the entire study duration. The value of FBS in this group was progressively increased due to the diabetes. This also gives the confirmation of successful induction and maintenance of diabetes in the study period.

Fall in FBS was mild during third week i.e. FBS was maintained in normal range. Final value of FBS for this group was very near to the FBS in normal control group for the same duration of treatment. Thus this treatment was found to be superior to metformin and bromocriptine monotherapy in treatment of diabetes.

TABLE 1: SEQUENCIAL CHANGES IN FASTING BLOOD   SUGAR OVER THE STUDY PERIOD IN ALL STUDY GROUPS

Graph 1 gives the representation of the effect of drug administration on alloxan induced diabetic rats. As shown in the graph, FBS value during the entire study period in normal control group was maintained at a constant level with minor fluctuations and this value was significantly (P<0.05) lower than the diabetic control rats. Diabetic control group show small increment in FBS during 1st, 7th, 14th and 21st day of study. On 7th day of experiment there was fall in FBS values in drug treated group while in untreated group FBS increased progressively. 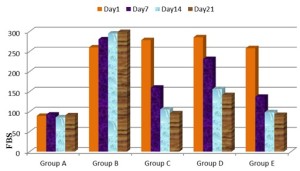 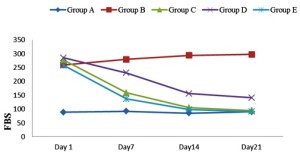 CONCLUSION: From the above discussion following conclusion can be drawn

Study with different group of oral hypoglycemic drugs can be done to assess its value as add-on drugs in the treatment of diabetes and as an adjunct to diet and exercise in controlling initial phase of diabetes mellitus. Also most of the persons suffering from diabetes are obese, so studies for antiobesity effect of bromocriptine can be done as a carry forward study, which can prove its action in improving the lipid profile and cardiovascular outcomes.

In our study, the dose of bromocriptine used was very small as compared to that used in Prolactinoma and Parkinsonism, so considering its safety parameters, study with different higher dosage of bromocriptine can be done as a carry forward study to establish its role in diabetes. This study was done on fasting rats, so further study is needed to see its effect on post prandial blood sugar. There is further scope of doing animal studies involving large number of animals, as well as human clinical trials to evaluate its role in hyperglycemia, lipid profile and improved cardiovascular outcomes.

ACKNOWLEDGEMENT: The authors wish to thank all the faculty members and animal house attendant of Department of Pharmacology, Rajendra Institute of Medical Sciences, Ranchi, Jharkhand, India, for the support to carry out this study.