Directly observed therapy (DOT) of tuberculosis patients talking their drugs is supposed to improve treatment completion and outcome .we compared DOT and Self Administered therapy (SAT), in which patients on the same drug regimen are not, observed taking their pills, to assess the effect of each on the success of tuberculosis treatment. This was the two year (2010 and 2011) retrospective study of tuberculosis patients admitted to the AH and RC.A total of 308 patients cases were analyzed. The majority of the cases were within 21-40 years TB patients were 38.96% of the total. Among the all TB patients with chronic illness others were 18(58.44%) more. Among 308 patients TB patients 131(42.53%) TB patients undergone DOT and 177 (57.46%) TB patient’s undergone SAT therapy. The comparative outcome between DOT and SAT were 110(86.61%) of cure and in SAT were 90 (57.32%). Only 5(03.93%) treatment failure, acquired drug resistance 01(00.78%), follow up lost were 11(08.66%) in DOT as compared to SAT 23(14.64%), 06(03.82%), 23(14.64%) respectively. There is no relapse and death in DOT therapy but in SAT therapy relapse were 10(06.36%) and deaths were 05(03.18%). There were large and significant difference in the cure, treatment failure, relapse and death rates between TB patient who receive DOT and SAT therapy respectively.

Tuberculosis (TB) is a global health concern, with an estimated 8.9 million new cases worldwide in 2004. It is a major contributor to the burden of disease, especially in low- and middle-income countries 2.

The world health organization (who, 2008), has estimated that 8 to 10 million people catch the disease every year, with 3 million dying from it. It causes more deaths worldwide than aids and malaria combined, and it is the world's biggest killer of women.

TB 'blackspots' include Eastern Europe, with 250,000 cases a year, south East Asia, with 3 million cases a year, and sub predicts that if left unchecked TB will kill 35 million people in the world by 2025 3.The introductory article by Zwarenstein et al., is the first randomized trial of dot against self-administered therapy to compare adherence and outcome 4.

Dot seeks to improve the adherence of people to tuberculosis treatment through health workers, family members, or community members directly observing them taking their anti-tuberculous drugs. This approach was first adopted in studies in madras, India, and Hong Kong as early as the 1960s and a number of specialists now widely recommend dot for the control of tuberculosis 6.

The principal objective of Directly Observed Therapy (DOT) is to cure the individual patient and to minimize the risk of transmission of TB to other people.

Study Type: A retrospective study was carried out using hospitalrecords for cases of pulmonary TB.

Study Analysis: Descriptive statistics such as mean, tables, graphs and charts wereused to analyze the data.

Study procedure: This study is carried out in DOT center of Adichunchanagiri Hospital and Research Center, B.G. Nagara, Karnataka, India. Before conducting the study we took Ethical Committee Clearance and collected the patient data from the medical records of DOT center. We collected the cases of past two years from 2010 to 2011 and we assessed the therapy outcomes in both DOT and SAT patients. We collected the required information from the SAT patients by regular follow ups in between the treatments.

In 2010 more number of TB cases were due to very easily spreading of TB due to spitting of sputum and contamination with sputum, lack of awareness regarding vaccines, lack of treatment adherence, lack of knowledge regarding DOT,  crowding, which leads to various sanitation and health problems. A dirty environment and malnutrition can both make a person more susceptible to TB infection. The larger number of admissions could also be due to increased awareness of TB among patients and their health seeking behavior.

Fig. 3 and table 3 show the types of illnesses suffered by patients with tuberculosis. The majority (58.44%) suffered from other illnesses like chronic obstructive airway disease, pneumonia, cancer, HIV and patients with TB, followed by hypertension (16.55%) and 3.24% suffered from hypertension with diabetes mellitus with ischemic heart disease. Whereas, in study conducted by Jetan CA et al., shows that more number of patients was having hypertension, diabetes mellitus and ischemic heart disease 7.

We found that a substantial proportion of patients in a DOTS programme more than 40% did not actually receive treatment under observation. Unawareness regarding DOT, illetaracy, advanced age/infirmity and fear of social stigma were the primary reasons given for not participating in DOT. Patients not receiving DOT were strikingly more likely to have treatment failure, relapse and deaths as compared to the patients on DOT.

Similar findings found in the study conducted by Balasubramanian VN et al., showed that Patients treated without direct observation have a substantially higher risk of adverse outcome than those treated under direct observation 1. 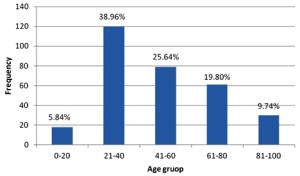 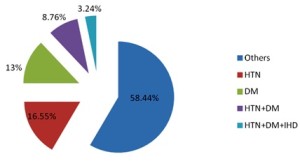 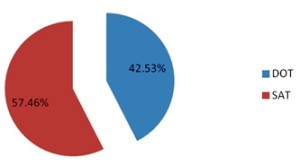 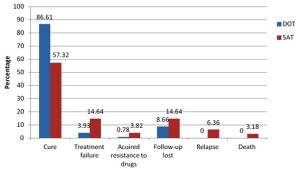 ACKNOWLEDGEMENTS: Authors are very thankful to Doctors of Adichunchanagari Hospital & Research center (AH&RC), B.G. Nagara, for their kind support. Our sincere thanks to Dr. B. Ramesh, Principal of Sri Adhichunchanagiri College of Pharmacy, B.G. Nagara, Staff and students of Clinical Pharmacy Department.

CONCLUSION: We conclude that the directly Observed therapy from start of therapy have greatest success in improving TB treatment outcomes as compared to self administered therapy .and there were no relapse and death in DOT therapy as compared to SAT therapy. The limitation of our study is that Sputum smear test was not undergone in TB patients. And we did not randomly assign patients to DOT or SAT.