A COMPARATIVE STUDY OF DOXYCYCLINE AND TETRACYCLINE POLYMERIC MICROSPHERES

A COMPARATIVE STUDY OF DOXYCYCLINE AND TETRACYCLINE POLYMERIC MICROSPHERES

ABSTRACT: Solvent evaporation technique is used for the preparation of Polylactic acid microspheres loaded with two antibiotics, Doxycycline and Tetracycline, by introducing different masses for each drug. They are characterized by calculation of drug encapsulation and drug loading, measuring the particle size, examining microspheres morphology, and performing FT-IR, stability and in vitro drug release studies. Moderate drug encapsulation values (38% and 24%) are observed for Doxycycline and Tetracycline respectively. Microspheres of both drugs show homogeneous size distribution varying between 80 and 110 µm. the FT-IR study has helped in verifying that both Doxycycline and the polymer are intact after microencapsulation. In the case of Tetracycline, it hasn’t revealed any significant results due to the low loading values. After 6 months of storage at different conditions, no appreciable difference is observed concerning the degradation of microspheres. In vitro release of drugs from encapsulated Polylactic acid microspheres shows that Tetracycline release is slightly faster and reaches 98% in less than 5 hours, in comparison with Doxycycline which attains the same percentage after 7 hours

INTRODUCTION:Targeted drug delivery to a specific body site is of great benefit in the treatment of several diseases such as cancer, viral diseases, bacterial infections, and others 1.

Among them, in recent years, much research has been focused on biodegradable polymeric microspheres 2.

Using biodegradable and biocompatible polymeric matrices in microspheres has many benefits for developing successful Drug Delivery Systems. They provide sustained delivery of the drug, its localized delivery, and its stabilization 3,4,5. Different kinds of agents such as active pharmaceutical materials, proteins, pesticides, etc. can be encapsulated with various polymeric coating materials, including chitosan, cellulose, polyesters, and others. One of the popular techniques for the encapsulation of a variety of hydrophilic as well as hydrophobic drugs is the solvent evaporation technique. It has many advantages over other techniques because it requires only simple experimental conditions such as ambient temperatures and mild stirring.

Polylactic acid (PLA) belongs to the family of thermoplastic aliphatic polyesters 3, 4, 5. It has been used extensively in medical implants, sutures, and drug delivery systems due to its high biodegradability and biocompatibility 6-9. Drugs encapsulated with PLA include Paclitaxel 10, Progesterone 11, Naltrexone 12, Methadone 13, and others.

Doxycycline (DOXY) and Tetracycline (TETRA) are two antibiotics that belong to the same family of Tetracyclines. They have similar chemical structures but different chemical properties 14.

Although more expensive, DOXY has a number of advantages over TETRA; it exhibits greater oral absorption, more prolonged half-life, and enhanced lipid solubility, which is more important for its bacterial action 15,16,17.

Microspheres of the two drugs, DOXY and TETRA, are formulated using the o/w emulsion solvent evaporation technique, with the same coating polymer, PLA. They are then characterized for drug loading and encapsulation efficiencies, particle size, morphology, microspheres stability, drug-polymer interaction, and in vitro drug release.

Microspheres Preparation: o/w solvent evaporation technique is used for the formulation of DOXY and TETRA microspheres. It consists of mixing an organic phase with an aqueous phase. X mg drug and 500 mg polymer are dissolved in a mixture of 14:6 ml Dichloromethane/Methanol (DCM/MeOH) forming the organic phase. The continuous phase is made of 250 ml water and 45 g Tween 80.

The mixture is stirred continually for 6 hours at 1300 rpm over a mechanical stirrer (MSP-1 Digital Overhead Stirrer, Jeiotech, Korea). The resulting solution is filtered in order to recuperate microspheres. These are then washed with distilled water and 5 ml MeOH, and dried for 48 hrs at 40°C.

Every 20 days, a certain quantity of the stored microspheres is evaluated by Optical Microscopy (LEICA DMLS2, Vashaw Scientific Inc., USA).

The maximum % DE is 38% and 24% for formulations D2 and T2 respectively as shows Table 1. The low values observed in terms of %DE and %DL for both kinds of formulations are related to the properties of polymer and the two drugs.

According to Mehta et al., the solubility of polymers in organic solvents determines the precipitation rate during the microencapsulation process 18. PLA shows a high solubility in DCM; thus it has a tendency to remain in the organic layer. Its solidification rate will in turn decrease, leading to low drug encapsulation values.

Along with the polymer properties in this case, drug properties, as the molecular weight and the solubility have affected the drug entrapment. Drugs having an average molecular weight easily diffuse out of the microspheres 18, 19. In the case of DOXY and TETRA, their relatively average molecular weight, 513 g/mol and 481 g/mol respectively, enables their loss out of the polymeric matrix, by diffusion during or after preparation, which results in low %DE and %DL for the different microspheres formulations. The solubility of the drug is also a key parameter in the encapsulation process 18, 19. The two drugs are amphiphilic in character.

Thus, after mixing the organic phase with the continuous phase, they have a tendency to migrate to the aqueous solution during the preparation of microspheres. This behavior is more obvious in the case of TETRA than DOXY, due to its higher hydrophilic character, which explains its lower percentage of encapsulation. Concerning the size of microspheres, both kinds of drugs show a homogeneous particle size ranging between 80 and 110 µm (Table 1). The drug-polymer interaction study is carried out by FT-IR spectroscopy. Spectra are recorded for PLA, the two drugs, and drug-loaded microspheres. Table 2 gives a summary of the characteristic bands in PLA, DOXY and TETRA.

The comparative spectra of DOXY, PLA and DOXY-loaded microspheres are showing in Fig. 1. The drug can be easily identified by the broad peak of –OH alcohol at 3300-3500 cm-1. Peaks observed around 2900-3000 cm-1 correspond to aliphatic –CH and –CH3 of the polymer PLA.

Peaks observed at 1210 and 691 cm-1 could be assigned to –CH and –CN groups of the drug 19, 20. This result clearly indicates the stability of the drug during the microencapsulation process. Results also show small deviations of some polymer bands like from 1748 to 1756 cm-1 and from 868 to 871 cm-1, probably due to the presence of DOXY.

Because of the low loading values in the case of TETRA, the FT-IR spectrum didn’t show any significant peak for Tetra in the microspheres. 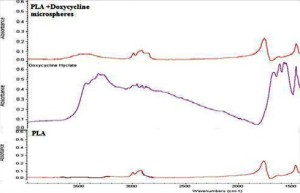 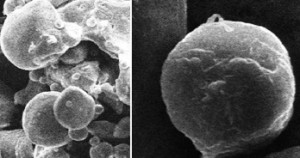 The stability study performed at different temperatures (4°C, 25°C, and 37°C) for 6 months shows spherical microspheres with no degradation and physical changes (Fig. 3). 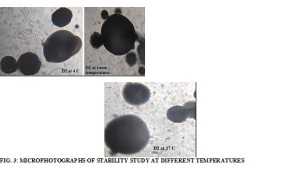 PLA is known to be hydrolytically unstable, although insoluble in water. It undergoes degradation by hydrolytic cleavage of ester bonds 19, 20, 21. This breakdown becomes fast at higher temperature; but PLA can resist in PBS at 37°C for almost 2 months. Therefore, it is stable in biological media (Fig. 4). Finally, the acidic media (pH 2) doesn’t show an influence on PLA formulations (Fig. 5). This indicates that microspheres can be taken orally and remain intact in the gastro-intestinal tract.

FIG. 4: MICROPHOTOGRAPHS OF STABILITY STUDY IN PBS AT 37°C

FIG. 5: MICROPHOTOGRAPHS OF STABILITY STUDY IN pH 2 AT 37°C

The in vitro drug release is studied for DOXY formulations D1, D2, and D3 and TETRA formulations T2, T3 and T4 (Fig. 6 and 7). These formulations are chosen because they have the highest %DE and % DL.

For both drugs the release is fast. It requires only few hours to go to completion. This can be explained by the high affinity of these drugs towards PBS used as release medium.

The release rate is also higher for formulations having the lowest amount of drug (D1 and T2). It becomes slower when higher amount is present inside microspheres, thus the drug will take longer time to escape into the release medium. This result is particularly noticed in the case of formulations D2 and T4 characterized by the slowest release.

At higher drug loading, the chances of particles to contact each other are high. This causes the formation of particular aggregates, which extends into the polymer matrix and needs more time to dissolve. The initial burst release observed for formulations D1 and T2 can be explained by the presence of surface associated drugs. Besides, the absence of aggregates due to the small quantity of drug leads to fast dissolution into the release medium during the first few minutes, especially in the case of hydrophilic drugs 18-22. 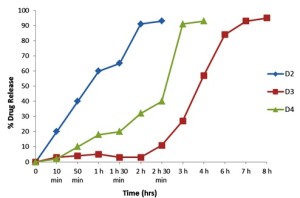 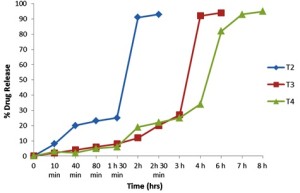 CONCLUSION: The o/w solvent evaporation technique has been used for the preparation of Doxycycline- and Tetracycline-loaded PLA microspheres. Microspheres have a spherical and porous profile, with an average size of 80 to 110 µm. Both drugs show average %DE and % DL due to their hydrophilicity; however, Doxycycline have higher encapsulation than Tetracycline. After carrying out the FT-IR study, results show that Doxycycline remains intact inside the microspheres after encapsulation.

Microspheres are stable after storage at different conditions. The in vitro release is fast for the two kinds of drugs; but it is faster in the case of Tetracycline. A controlled release followed by a burst release is observed for formulations with lowest %DL. This study has revealed that the prepared PLA-coated microspheres are suitable for the encapsulation of many drugs and biological molecules.

ACKNOWLEDGMENTS: The authors would like to thank the Chemistry Department at the University of Balamand for the help in funding the project, and allowing buying the necessary chemicals needed for the laboratory work.