Categories Menu
Home » A COMPARATIVE STUDY OF EFFECT OF INTRAVENOUS DEXMEDETOMIDINE VS. PLACEBO BEFORE BRACHIAL PLEXUS BLOCK ON PATIENT SATISFACTION AND SUCCESS OF BLOCK

A COMPARATIVE STUDY OF EFFECT OF INTRAVENOUS DEXMEDETOMIDINE VS. PLACEBO BEFORE BRACHIAL PLEXUS BLOCK ON PATIENT SATISFACTION AND SUCCESS OF BLOCK

A COMPARATIVE STUDY OF EFFECT OF INTRAVENOUS DEXMEDETOMIDINE VS. PLACEBO BEFORE BRACHIAL PLEXUS BLOCK ON PATIENT SATISFACTION AND SUCCESS OF BLOCK

ABSTRACT: The brachial plexus block(BPB) has gained importance as regional anaesthetic technique for upper limb surgery. The primary aim of our study was to evaluate the addition of intravenous dexmedetomidine before BPB on overall patient satisfaction and sucess with objective of comparing the onset and duration of block, haemodynamic stability and sedation score. A randomized double blind prospective study was carried out on seventy patients of ASA grade I to III of either sex aged between 18 – 65 years scheduled for upper limb orthopaedic surgeries under BPB Who were randomly allocated into two groups: Group D (Dexmedetomedine) received Inj dexmedetomidine 1 µg/kg in intravenous 100 ml saline and Group P (Placebo) received intravenous 100 ml saline started 10 min before block. Onset and duration of block, quality of block, Haemodynamic variables, time to first rescue analgesics in post-op period, Sedation score, VAS score and Incidence of side effects and complications were recorded. Statistical analysis was done using Graph pad software. Hemodynamic variables, sedation score and satisfaction scores were analyzed by z-test, while qualitative data were analyzed by Chi-square test. Result:  Mean Sedation score was significantly higher in group D while mean pulse rate and mean arterial pressure were significantly lower in group D than group P. The Quality of block was significantly higher(p=0.0314) in group D (88.57%) than group P(80%).  Overall Patient satisfaction was higher(p=0.0008) in group D than  group P. Conclusion: The addition of dexmedetomidine as a premedication before BPB improves patient satisfaction, with stable hemodynamics, high quality of block and comfortable sedation without any significant side effect.

Patient Satisfaction And Success of Block, Hemodynamic, Onset And Duration of Block.

INTRODUCTION: Halsted and Hall first described the technique of brachial plexus block for upper limb surgeries in 1885 1. Since then a variety of modifications in the technique has been described and in recent years, the technique has gained importance as regional anesthetic technique for surgical, diagnostic and therapeutic purposes in interventional pain management. It provides ideal operating conditions by producing complete muscular relaxation, maintaining stable intraoperative hemodynamic, and the associated sympathetic block.

Various adjuvant drugs like opioids 2, clonidine 3 and neostigmine 4 have been evaluated in conjunction with local anesthetics to prolong the period of analgesia but all of these drugs are used off label and none are approved by FDA for administration through this route.

There are no studies to our knowledge in the literature studying the effect of intravenous dexmedetomidine sedation on patient satisfaction and success of brachial block. So, we studied effect of intravenous dexmedetomidine on patient recall and acceptability of anesthesia procedure. Dexmedetomidine is a highly selective α2 agonist which has a set of unique effects that include titratable sedation, sympatholysis, and analgesia without significant respiratory depression. In this study, we also compared the onset and duration of brachial plexus block (BPB), the time at which the patient first feels pain after performing BPB, the need for use of analgesics, and the rate of complications with single dose intravenous dexmedetomidine to a control group, who were only infused with normal saline.

After that, patients were taken inside the operation theatre, monitors were applied and all patients were premedicated with Inj. Glycopyrrolate 0.2mg intravenously, Inj. Ondansatron 4mg intravenously and Inj. Ranitidine 50 mg intravenously. Brachial plexus block was given by supraclavicular or  parascalene approach and 35ml of drug mixture consisting of Inj. Lignocaine+adrenaline(2%) 14cc, Inj. Bupivacaine (0.5%) 15cc and Inj. Normal saline 6cc = 35cc  was given after careful negative aspiration.

Patients were examined for duration of analgesia as per Visual Analogue Scale (VAS) which was recorded post operatively at every 4 hours till VAS score of ≥ 4, when first demand for  analgesia was given in the form of Inj. Diclofenac sodium 75 mg  IM and time of rescue analgesia was noted. Any incidence of side effects and complications like nausea, vomiting, pneumothorax, hematoma, local anaesthetic toxicity, bradycardia, hypotension and post block neuropathy in the intra and post-operative period were noted.

Our study shows that demographic data were comparable in both groups.

The quality of block was higher in group D (88.57%) compared to group P (72.92%) which was statistically significant (p value- 0.0314) while the success rate between the two groups came out to be statistically insignificant. 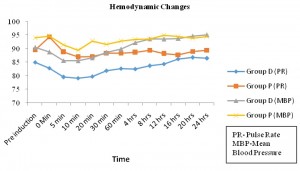 Mean Visual analogue score in group D was lower compared to group P right from the time before induction upto 30 minutes after induction, which were statistically significant. 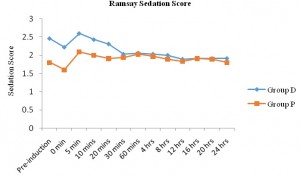 Brachial plexus block is a versatile and reliable regional anaesthesia technique and suitable alternative to general anaesthesia for upper limb surgery that is often used to provide not only anaesthesia but also postoperative analgesia after surgery.The technique is performed with local anesthetics like lignocaine and bupivacaine.

The procedure of giving brachial block is painful and unpleasant for the patient. Dexmedetomidine is a highly selective alpha-2 adrenoreceptor agonist with α2:α1 binding ratio of 1620:1 compared to 220:1 for Clonidine. Dexmedetomidine has analgesic and sedative effect without causing respiratory depression. Dexmedetomidine has been used as an adjuvant during regional and local anesthesia in several studies 5.

In this study, we compared single dose intravenous dexmedetomidine, to a control group, who were only infused with normal saline for the onset and duration of brachial plexus block (BPB), the time at which the patient first feels pain after performing BPB, the need for use of analgesics, and the rate of complications.

Velayudha Sidda Reddy et al 9 evaluated the efficacy of intravenous dexmedetomidine premedication with clonidine and placebo in spinal anaesthesia and observed that heart rates in the dexmedetomidine group appears to be lower than that of clonidine and placebo groups, but there is no statistically significant difference among the groups except at 5 mins after spinal anesthesia where the mean heart rate was significantly lower (P = 0.0299). This study is in contrast to our study where mean pulse rate in group D was lower compared to group P from the time immediately after induction upto 8 hrs after induction, which were statistically significant probably because the decrease in the heart rate in dexmedetomidine group in this study might have been masked by the sympathetic blockade caused by spinal anaesthesia.

Study done by Rabab Saber Saleh Elsayed Mahrous 10 on effect of dexmedetomidine in reducing haemodynamic response to general anesthesia showed patient in dexmedetomidine group (0.4µg/kg/hr) had statistically significant lower mean arterial blood pressure compared to fentanyl group(1 µg/kg) till 5 minutes after surgery. Our results were comparable to this study where change in mean arterial pressure was statistically significant (p=0.001) till 5 minutes postsurgery which differs from our study in that the difference was significant till 20 minutes after induction with brachial block, probably because we used only loading dose of intravenous dexmedetomedine (1µg/kg) in contrast to this study where they kept continuous infusion of maintenance dose(0.4µg/kg/hr).

In our study , we found that Mean sedation score in dexmedetomidine group was significantly higher compared to placebo group right from the time before induction of brachial plexus block up to 20 minutes after induction, which  was comparable with study done by Mizrak A et al 11 who observed that premedication with a single dose dexmedetomidine 0.5 μg/kg before IVRA caused increase in intraoperative and postoperative RSS scores at 5,10,30,60 and 120 minutes (p<0.001) compared with placebo group.

In our study, the onset of sensory and motor block was faster and duration of sensory and motor block was longer in patients who received dexmedetomidine before brachial block than the placebo group respectively although it was not statistically significant but  Rutkowska et al 7 showed results which were in contrast to our results where the motor and sensory block was longer in the dexmedetomidine group, which was statistically significant (11.9 +/- 3.8 vs. 9.4 +/- 3.4 h, P = 0.0085 and 9.4 +/- 3.4 vs. 7.3 +/- 2.8 h, P = 0.030, respectively). Study done by Park JW et al 8 also showed that the motor and sensory block duration , and the time at which the patient feels pain after brachial block were longer in Dexmedetomidine group compared to control group.

Eun-Jin Moon et al 14 compared monitored anaestesia care (MAC) with dexmedetomidine (1 µg/kg) and intermittent ketamine with spinal anaesthesia(SA) for patient satisfaction using ISAS scale{Iowa satisfaction with anaesthesia scale. The verbal rating scale 0(worst) to 10(best)} and concluded that patient’s(p=0.018) and surgeon’s satisfaction(p=0.001) were lower in MAC group (7.4 and 6.2 respectively) compared to SA group (9.0 and 9.1 respectively). This is in contrast to our results probably because spinal anaesthesia provided complete analgesia as well as relaxation which is far superior in quality to intermittent doses of ketamine and dexmedetomidine infusion. Moreover SA provided postoperative analgesia as well to greatly improve the patient’s satisfaction.

Study done by Ashraf Ghali et al 15 regarding sedation with dexmedetomidine (0.4µg/kg/hr after loading dose of 1 µg/kg over 10 minutes) and propofol (0.5-2mg/kg/hr after loading dose of 0.7mg/kg) observed that the surgeon’s satisfaction with patient’s sedation was similar for both groups. While, in the dexmedetomidine group, there was higher patient’s satisfaction compared with the propofol group.

CONCLUSION: From our study, we found that, the addition of dexmedetomidine as a premedication before brachial plexus block provides stable pulse rate without any significant bradycardia, stable mean arterial pressure, comfortable sedation without any need for airway assistance, higher quality of block and high success rate with higher patient’s satisfaction without any difference in the duration of analgesia with single dose of intravenous dexmedetomidine.

So we conclude that addition of dexmedetomidine before brachial plexus block improves patient satisfaction without any significant side effects.