ABSTRACT: Objectives: To compare efficacy and safety of topical plus reduced dose of   diclofenac to oral diclofenac in therapeutic dose. Method: The study was prospective, comparative and randomized, which included 50 patients suffering from knee osteoarthritis. Patients were randomized to receive either - oral diclofenac alone (50 mg thrice daily) (therapy1) or decreased dose of oral diclofenac and topical diclofenac (75 mg SR once daily + 10 mg Nanogel thrice daily) (therapy 2). The patients had been followed up for 7 days. Visual Analogue Scale and Lequesne Index has been used to evaluate the efficacy. Adverse drug reaction form, WHO and Naranjo Causality Assessment Scale were used to evaluate the safety of the patients. Data were analyzed by independent student t- test. Results: Out of 50 patients 17 were male and 33 were female.  Osteoarthritis is more prevalent in 40-60 years of age, female patients and higher body weight and Body Mass Index (BMI). Therapy 2 was found statistically superior to therapy 1 on efficacy parameters (VAS Scale and Lequesne Index). Compliance was also better with therapy 2. Conclusion: Both therapies effective and well tolerated although therapy 2 is comparatively more effective and has more patient compliance than therapy 1. There was no ADR reported

INTRODUCTION: Osteoarthritis (OA) is the most common form of arthritis, which affects millions of individuals aged 55 years and above, often leading to  physical disability and   reduced    quality    of   life. 1-3           It   is   a   late-onset musculoskeletal disease characterized by gradual thinning and loss of articular cartilage of the synovial joints with a concurrent alteration in the physiology of several other joint tissues, including the subchondral bone and the synovium. 2-6

Clinically OA is not one disease but a final common pathway secondary to many predisposing factors, most notably age, female sex, joint trauma, bone density, muscle weakness, altered biomechanics, and obesity. 7-9 Modifying  these  factors may reduce  the  risk  of  OA  and  prevent  subsequent pain and disability. 8 Given the aging of the population and the increasing occurrence of obesity in our population, a major risk factor for disease, estimates suggest a doubling in prevalence from 2000 to 2020.3

OA can affect any joint, most commonly the knee, hip, spine, and hands.7 Knee OA was the most common type affecting 6% of all adults. 9 The  risk  of disability  attributable  to  knee  OA  alone  is  as  great  as  that  due  to  cardiac   disease and greater than that due to any other medical disorder in the elderly. 9

The number of OA cases rises in people of advancing age, possibly beginning as early as the third decade of life. As the population of elderly patients continues to grow, OA becomes a significant medical and financial concern and is expected  to  be   a heavy economic burden on  healthcare  systems  and community services all around  the world.10

The rapid increase in the prevalence of this already common disease    suggests that OA will have a moderate-severe impact on health care and public health systems in the future. 8 In OA patients, Health Related Quality of Life (HRQoL) and activities of daily living are also negatively affected. Significant work disability that is inability to do normal work, reduced ability to deal with household duties and sleep disorders  are  reported  in  patients  with  symptoms of OA flare-ups, together with dysfunctions in the areas of ambulation, body- care and movement and emotional behavior. 11, 12 Therefore, OA  has  a  clear  and  detrimental  impact  on  wellbeing,  with  up  to one-fifth  of affected individuals giving up work or retiring early because of the disease, and this increased morbidity contributes indirectly to an increased mortality.4

There is currently no cure for OA and treatment focuses on relieving pain and improving function of the affected joints.1, 2, 5, 6 These goals should be achieved with minimal toxicity. 5

Current recommendations for the management of OA include     a   combination   of   non pharmacological interventions and pharmacological treatments.  Among         these pharmacological treatments,       non-steroidal        anti-inflammatory drugs (NSAIDs), despite serious adverse effects associated with their  long-term  use,  remain among the most widely prescribed drugs for OA. 6 Among NSAIDs diclofenac have an established place in the management of OA and related inflammatory disorders, while unable to modify the disease of OA; NSAIDs are frequently used chronically to manage symptoms. NSAID- related gastrointestinal (GI) adverse events (AEs), or "NSAIDs gastropathy", which result from decreased prostaglandin synthesis in the gastric lumen,   and primarily affect older patients and women. 13  Oral  NSAIDs  also  have  other potential associated toxicities that must be  monitored  for  and  can  limit  the     use of these drugs in certain populations     including people of older age. 14

Application of the topical diclofenac solution to the knee of patients with OA produced relief of symptoms equivalent to oral diclofenac, with  minor  local  skin  irritation,  but  significantly  reduced  incidence  of  diclofenac-related  GI  complaints   and abnormal laboratory values. 15 Topical administration represents a useful alternative to oral  treatment  in  the   management  of  OA,  especially  in  elderly  patients  and  those  at increased risk for serious gastrointestinal adverse events.13 Topical application is also   a method to increase the diclofenac concentration effectively in the muscle  close  to  the body  surface,  which  frequently  presents  inflammatory  conditions  due   to  overuse  and trauma.16

This study was conducted with objective of analyzing efficacy and safety oral diclofenac Vs decreased dose of diclofenac and topical diclofenac in the treatment of knee osteoarthritis.

The study was prospective, comparative, randomized study, conducted in Shree Krishna Hospital affiliated to Pramukh Swami Medical College, a tertiary care teaching hospital in Gujarat, India. The study has been approved from Institutional Ethics Committee. Prior to enrollment informed consent has been taken for all the patients after explaining them objective of the study in their vernacular language.

All new male and female patients with age above 30 years diagnosed with OA of knee and who voluntarily gave their consent to participate in the study, were included in the study. Patients allergic to diclofenac, having psoriasis or any other inflammatory skin disease, with  presence/ history of peptic ulcer, gastric bleeding and renal disease, pregnant and lactating women were excluded from the study.       Study Duration was 4 months. Patients were randomized in two groups consisting of 25 patients in each. In first group study drug Oral Diclofenac 50 mg t.i.d. ( therapy 1) and in second group Oral Diclofenac 75 S.R. o.d. and Topical Diclofenac 10 mg Nanogel t.i.d. (therapy 2) were given. The respective therapies were prescribed for 7 days to both of the group of patients. The patients were followed up during their hospital visits after seven days. Successive measurement of    pain score was carried out using Visual Analogue Scale (VAS) 17 and Lequesne Index 18 after a week of the treatment.

On the first visit. Demography details, personal history were noted. Patients were clinically examined and there were classified on the basis of severity of OA. On 1st follow up patients were asked for adverse drug reactions and scoring on both scales were noted. If the patient did not respond to the reduced dose of Diclofenac plus topical Diclofenac then the patients were immediately given the standard therapy that is the regular dose of diclofenec. 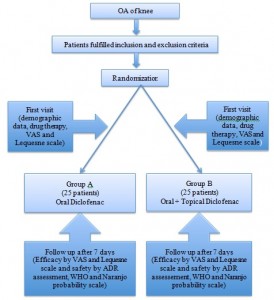 All the age groups more number of female suffers from osteoarthritis of knee compared with males. Only 6 (12%) patients have suffered from OA of knees below 44 years of age. Data suggest that in female  between the ages of 45-54 years risk of OA is more. As the age increases risk of OA also increases. Data suggest that in patients with age >60 years there is no difference in gender ratio, i.e. out of 12 patients of age >60 years the ratio of male and female is same. (Fig.1) 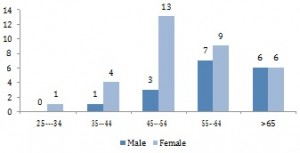 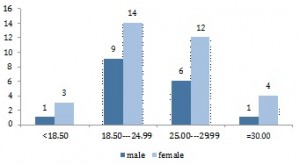 TABLE 1: CLASSIFICATION OF PATIENTS ACCORDING TO SEVERITY OF OSTEOARTHRITIS

S.R. o.d. plus topical diclofenac 10 mg nanogel t.i.d. with independent t -test (Small group correlated group) was done using VAS Scale and Lequesne Index. Data show that there is a significant difference observed before and after therapy in both the drug therapies proving that both the therapies are effective in the treatment of knee osteoarthritis although therapy 2 is slightly more effective than therapy. (Table 2)

TABLE 3: COMPARISON OF THERAPY 1 AND 2 IN MALE AND FEMALE

There were no adverse drug reactions recognized as such because the patients were already prescribed either H2 Receptor Blocker or   Proton Pump Inhibitors with the therapy.

DISCUSSION: It indicates that females are at more risk of osteoarthritis than males. In this study prevalence rate of female suffering from OA is 66% and for male it is 34%. Prevalence of OA is almost double than male in the study. Dulay et al.9 confirmed that females are twice more likely to be affected than males.  Another study conducted by Yuqing Zhang et al.8 showed that OA is more prevalent in women (13%) than in men (10%).

Yuqing Zhang et al.8 concluded that obesity and overweight are potent risk factors for OA, especially OA of the knee. Farshid Gulik 20 confirmed that obesity could increase the risk as well as progression of OA.  Therefore we can conclude that weight is a major risk factor for the patients with knee osteoarthritis.

Data show that more number of males and females are affected as the BMI increases. Yuqing Zhang et al.8 concluded that obesity and overweight are potent risk factors for OA, especially OA of the knee. Therefore we can conclude that BMI is a significant risk factor for the patients with knee osteoarthritis. M. Blagojevic 21 concluded that smoking has no effect on OA of knees.  This suggests that smoking habit and OA does not have any relation. Data show that OA of right knee is more common than OA of left knee as well as OA of both knees. Joern W. P. Michael et al.22 conclude that knee OA in men is more common in right knee and it is evenly balanced in both the knees in women.

John H. Peniston et al.29 suggested that by decreasing the NSAIDs dose by including topical NSAIDs might prevent the risk of drug- drug interactions that could lead to adverse events. The data showed the correlation with the above-mentioned studies. Therefore it showed that in this study that topical diclofenac is more efficacious than oral diclofenac and is a useful alternative to oral diclofenac.

Limitation: The limitation of this study was that the numbers of participants were less  and  the  duration of the study was short. Patients were followed for only seven days so the long- term  effects  of the therapy could  not  be concluded.

CONCLUSION: Age, Sex, Weight, Body Mass Index are the major risk factors associated with Osteoarthritis of knee. Both therapy 1: Oral Diclofenac 50 mg t.i.d. and therapy 2: Oral Diclofenac 75 S.R. o.d. and Topical Diclofenac 10 mg. Nanogel t.i.d. are effective and well tolerated although therapy 2 is comparatively more effective than therapy 1.There are no ADR found in any case may be due to the smaller size of subjects as well as the duration of the study is less.

In future  there is possibility to do extension of this study to find out the ADRs between two therapies in longer duration of time with more number of subjects.