An Ulcer is a sore which means an open painful wound in mucous membranes or mucosal linings of the body. Gastro intestinal ulcers frequently occur in the stomach and duodenum where acid and pepsin activity is greatest. Peptic ulcer disease can be prevented by strengthening the cytoprotection, the defensive mechanism of gastric mucosa, rather than attenuating factor of aggression causing ulceration. Michelia champaca Linn., a well known member of Magnoliaceae is known for its fragrant flowers and various pharmacological actions. Anti-ulcerogenic activity of Michelia champaca Linn. flower and leaves are evaluated against aspirin induced gastric ulcers in pylorus ligated rats. The anti-ulcer potential is determined by using gastric juice volume, total acidity, pH and ulcer index. Both aqueous and alcoholic extracts of Michelia champaca Linn. flower and leaves are evaluated for their anti ulcer potential at about a dose of 300mg/kg b.wt, and are compared with the standard drug Cimetidine (50mg/kg b.wt). All the four extracts are said to possess significant anti ulcer potential by decrease in gastric juice volume, total acidity, ulcer index and increase in pH. The extracts have shown the anti ulcer property in the following order with reference to standard drug: Flower aqueous> Leaf alcoholic> Flower alcoholic> Leaf aqueous. The current study suggests that anti ulcerogenic effect of Michelia champaca Linn. is due to decrease of acid and pepsin outputs which enhance gastric mucosal strength.

INTRODUCTION: Michelia is a genus of flowering plant belonging to the family Magnoliaceae. Michelia champaca is a well known tree throughout the world. The tree is well known by the name “CHAMPAKA”. This is commonly used in traditional medicine as remedy for treating stomach ulcer and also as diuretics 1.

An ulcer is an imbalance between gastro damaging factors within the lumen and protective mechanisms in the gastro duodenal mucosa. Although prolonged anxiety, emotional stress, heamorrhagic surgical shock, burns and trauma are known to cause severe gastric irritation, the mechanism is still poorly understood 3. However, implicated that oxygen derived free radicals has a role in the pathogenesis of a wide variety of clinical disorders and gastric damage caused by physical, chemical and psychological factors that leads to gastric ulceration in human and experimental animals 4.

Keeping this in view, the present study was carried out to determine the anti ulcer activity of Michelia champaca leaves and flowers in rats.

Acute Oral Toxicity Studies: The acute oral toxicity study was carried out as per guidelines OECD- 425.

Experimental Animals: Male albino rats weighing between 200-250 gm were used for the study. All these animals were maintained under standard husbandry protocol and conditions (light/dark period of 12 h light/dark and temperature 25 ± 3 °C) with free access to food and water ad libitum.

Aspirin induced Gastric Ulcers in rats: 36 healthy male Albino rats were selected and randomly distributed into 6 groups of six animals each Group I and II served as induction and positive control groups and received 200mg/kg b. wt of aspirin in 1% CMC solution followed by 0.9% saline by oral route for 5 days and the standard drug cimetidine 50mg/kg b.wt followed by 200mg/kg b.wt of aspirin in 1%CMC solution by oral route for 5 days respectively. Whereas, groups III, IV, V, VI received the treatment along with the aspirin induction. Flower aqueous and flower alcoholic 300mg/kg b.wt was given for group III and IV and group V and VI received leaf aqueous and leaf alcoholic 300mg/kg b.wt.

On the sixth day pylorus ligation was performed for each animal. The animals were sacrificed after four hours using diethyl ether anaesthesia, abdomen was opened and the stomach was isolated. The gastric juice was collected in a measuring cylinder and the stomach was opened along the curvature. The mucosa was washed with 1ml distilled water and the washings were added to the gastric juice, the gastric content was centrifuged at 1000rpm for 10mins. 1ml of supernatant was diluted with 9ml of distilled water. The solution was titrated against 0.01N Sodium Hydroxide using phenolphthalein as indicator and the end point was noted 7, 8, 9.

Each stomach was examined grossly and the ulcer was graded using the following scoring system;

RESULTS AND DISCUSSIONS: In the present study, antiulcer property of Michelia champaca Linn flowers and leaves were evaluated by employing pylorus-ligation and aspirin induced ulceration models in albino rats.  Aspirin is a known ulcerogenic agent which significantly increases the free and total acidity with a decrease in hexose, hexosamine and sialic acid levels. It is found to be one of the notable agents which cause ulceration in human beings. Factors such as gastric acid output, gastric wall mucin depletion and vascular injury are associated with ulcerogenesis caused by aspirin 10. Gastric acid and Pepsin are important factors for the formation of ulcers in pylorus-ligated rats 11. Pylorus ligation may also attribute to increased synthesis of nucleic acid metabolism of carbohydrates 12. Aspirin along with pylorus ligation is found to be a very effective model for induction of ulceration in rats 13.  Aspirin causes mucosal damage by interfering with prostaglandin synthesis, increasing acid secretion and back diffusion of H+ ions 3. The inhibition of mucosal prostaglandin production occurs rapidly following oral administration of aspirin. This is correlated with rapid absorption of these drugs through the mucosa 14. In pylorus ligation, the digestive effect of accumulated gastric juice and interference of gastric blood circulation are responsible for the induction of ulceration 15.

Michelia champaca Linn. flowers and leaves were evaluated for the antiulcer potential in the current study. Both alcoholic and aqueous extracts were tried against the model using cimetidine as a reference drug. All the four extracts significantly decreased the gastric juice volume as compared to the induction group and the results are exhibited in table 1. 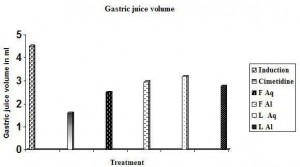 All the four extracts significantly increased the pH as compared to the induction group and the results were exhibited in table 1. Fig. 2 shows the increase in pH was at its maximum level for the reference standard group followed by flower aqueous extract treatment group. The least level of increase was seen in leaf aqueous extract treated group. The excessive secretion of hydrochloric acid in the stomach was considered to be an important factor in the formation of peptic ulcer 17, 18. Hydrochloric acid is known to produce ulceration and digestion of the stomach tissues 19 as well as to reduce the neutralizing capability of the stomach mucus secretions. 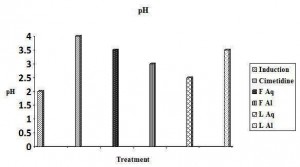 As a measurement of free hydrogen ion, pH indirectly represents the hydrochloric acid concentration in the stomach. Increase in pH is usually affected by either the reduction of the acid secreted in the stomach or the increase in the volume of alkaline and neutral fluids (eg, mucus). The variation in the pH level among the groups shows tendency of protective effects of them towards gastric ulceration. On examining the extracts of Michelia champaca leaves and flowers for their effect over total acidity content, it seems to be that the extracts had a very good control over total acid content. This may be due to the decreased gastric juice volume as compared to the ulcer induced group.

Further, these results were supported by the change in pH of the gastric content. The results were exhibited in table 1 and Fig. 3 depicts the decrease in acidity was at its maximum level for the reference standard group followed by flower aqueous extract treatment group. The least decrease in acidity was shown by leaf aqueous extract treated group.

CONCLUSION: It is concluded that the flower aqueous extracts of Michelia champaca Linn. possess significant antiulcer activity than the other three extracts (leaf alcoholic, flower alcoholic, leaf aqueous). The anti ulcer principles of flower aqueous extract may be responsible for protecting gastric mucosal damage induced by aspirin through inhibition of gastric acid, pepsin output (attenuation of aggressive factors) and stimulation of mucous secretion (potentiation of defensive factors) and these parameters are responsible for the antisecretory and antiulcer activities against experimentally induced ulcers in rats.

The extracts possess anti ulcer activity in the following order with reference to the standard drug;