Thiazolidinediones (TZDs) were widely used for the treatment of type 2 diabetes. Recent studies have shown that TZDs have paradoxical effects on cardiovascular diseases. The objective of the present study was to investigate the effect of TZDs (Rosiglitazone and Pioglitazone) in High Fructose Diet (HFD) induced hypertension in rats. HFD was given for 14 weeks. After 8 weeks of hypertension induction period, treatment phase was started with Rosiglitazone (ROSI 10 and 30 mg/kg, p.o.) and Pioglitazone (PIO 10 and 30 mg/kg, p.o.) to the respective groups which were continued till 6 weeks. Systolic Blood Pressure (SBP) was measured weekly and serum glucose, triglyceride, cholesterol and HDL-C were measured at the end of study period. In HFD fed rats hypertension was observed after 8 weeks. Treatment with the test drugs significantly reversed the changes in serum enzyme levels as well as SBP made by HFD feeding compared to the control group. The study concludes that TZDs possess antihypertensive effect as exhibited in the present experimental settings.

Along with evidence of benefit on surrogate cardiovascular markers such as lipids, blood pressure, inflammatory biomarkers, endothelial function and fibrinolytic status led to the widespread use of these drugs 3.

In the past few years, studies have been done on both the glitazones and they uncovered both the beneficial and detrimental aspects of these controversial drugs. Some reviewers have concluded that rosiglitazone caused more fatal outcomes than pioglitazone 4.

In September 2010, the European Medicines Agency suspended the use of rosiglitazone. In the United States the drug is available on a restricted basis. India banned the production and import of diabetes drug Rosiglitazone in October 2010. However the other Thiazolidinedione, Pioglitazone is still in medical practice for diabetes management.

Considering these information and lack of sufficient data from the chronic animal studies to support the clinical findings about the TZDs, the comparative effects of both thiazolidinediones were examined in HFD rats for assessment of cardiovascular risk factors.

Animals which were showing significant increased SBP compared to control was considered as hypertensive and used for further study (Graph 1). 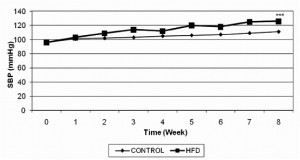 DISCUSSION: The results of our study showed that  a fructose enriched diet for 8 weeks lead to significant increase in systolic blood pressure (SBP) [Graph 1]. Treatment with different doses of the test drugs (ROSI and PIO) significantly reduced this elevated SBP in rats.

It is generally agreed that fructose loading induces insulin resistance and glucose intolerance 13. The present study showed that there was significant increase in serum glucose levels in Wistar rats following fructose treatment for 8 weeks. Administration of ROSI and PIO showed significant decrease in glucose level indicating the insulin sensitizing activity of these drugs 14. Insulin resistance and hyperinsulinemia could be viewed as permissive, representing changes that predispose an individual to high blood pressure, but not that necessarily cause hypertension by themselves 15.

Although we had not measured serum insulin levels, but serum glucose levels remained high, suggesting that the rats might be insulin-resistant 16.

Increased insulin resistance and hyperinsulinemia were linked to the development of hypertension 17. Hyperinsulinemia is caused by increased insulin secretion in response to glucose which results from hyperactivity of the pancreatic cells to glucose and an activation of sympathetic nerves 18. It, therefore, seems that our test drugs (ROSI and PIO) exert its antihypertensive effect by improving insulin sensibility as observed with earlier studies in thiazolidinedione 19.20.

Hypertriglyceridemia in fructose-treated rats has been demonstrated by several workers. In our study, serum triglyceride and cholesterol levels were significantly increased in fructose fed rats. Hypertriglyceridemia has been proposed to be caused by either increased hepatic secretion of very-low-density lipoprotein-triglyceridc (VLDL-TG) or a decreased removal of triglyceride-rich lipoprotein from the circulation 21. In the present study, the fructose fed rats treated with test drugs produced a marked fall in serum triglyceride levels but not in the cholesterol levels. Similar finding was also observed with the other TZDs 22.

Blood pressure lowering effect has been reported with the TZDs administration in a variety of settings characterized by normal as well as reduced insulin action on glucose metabolism. Specifically, TZDs have lowered blood pressure in several models characterized by insulin resistance: obese Zucker rats 23, Dahl salt-sensitive rats 24, fructose-fed rats 25, and humans with obesity, impaired glucose tolerance, or NIDDM 26, 27, 28. In each of those settings, the blood pressure lowering effect was associated with an improvement in insulin action, suggesting that the two effects of TZDs might be linked mechanistically.