Categories Menu
Home » A COMPARATIVE STUDY OF THE BIOACCUMULATION OF PCB 126 IN THE INTESTINE TISSUE OF FRESHWATER FISH RASBORA DANICONIUS AND PUNTIUS TICTO (HAM.)

A COMPARATIVE STUDY OF THE BIOACCUMULATION OF PCB 126 IN THE INTESTINE TISSUE OF FRESHWATER FISH RASBORA DANICONIUS AND PUNTIUS TICTO (HAM.)

A COMPARATIVE STUDY OF THE BIOACCUMULATION OF PCB 126 IN THE INTESTINE TISSUE OF FRESHWATER FISH RASBORA DANICONIUS AND PUNTIUS TICTO (HAM.)

ABSTRACT: Two species of freshwater fish, Rasbora daniconius and Puntius ticto, were procured from a local freshwater body. They were subjected to chronic exposure by a daily sub-lethal dose of PCB 126, by use of a continuous flow-through method, for a period of 30 days. Estimation of bioaccumulation of PCB 126 in the intestine tissues of the fish was carried out at intervals of every 5 days using suitable clean-up methods. The extent of bioaccumulation of PCB 126 per gram wet weight of tissue in the eluate obtained after the cleanup process was assessed with the help of GC-MS. Both species of the test fish showed bioaccumulation in varying concentrations in the intestine tissue. A comparison of the PCB 126 values at the end of the experimental period of 30 days shows that there is an appreciably greater extent of bioaccumulation of PCB 126 in intestine tissue of the freshwater fish, Rasbora daniconius as compared to that of Puntius ticto.

INTRODUCTION: A large volume of work is available where analysis of the effects of various pollutants on organisms has been studied. Further, this work on effects on aquatic organisms is also considerable. A major part of the work has been carried out on marine fish and lesser so on freshwater fish. Due to the aquatic habitat of fish and the unique properties of water, pollutants are seen to enter the bodies of fish from the surrounding water, bioaccumulate in their bodies and biomagnify over different trophic levels of the food chain, ultimately reaching the diet of man. The study of degrees of bioaccumulation of various pollutants, and their effects on organisms, has thus become an important part of ecological studies. The pollutants include a variety of substances, such as pesticides, heavy metals, etc.

Fish, being aquatic organisms, are directly exposed to pollutants present in the water primarily through gills, during respiration, which is a continuous process. Secondarily, direct exposure of the body to pollutants is also at the site of the alimentary canal, where they would enter through or with food. The metabolic pathway through which these substances may travel is first through the circulatory system, where they may be deposited by blood from gills and intestinal tissue, into the liver for bio-transformation into less harmful substances, and then to the kidney for excretion to the outside. In the present comparative study, bioaccumulation of PCB 126 in the intestine tissue of the freshwater fish Rasbora daniconius and Puntius ticto has been considered.

MATERIALS AND METHODS: Fish of both species were obtained from local freshwater bodies. Their easy availability, small size, less weight, ease of stocking and handling, etc., rendered them favorable for the present study. The fish were acclimatized in dechlorinated tap water for about ten days at room temperature.

The well-known acronym PCB (Poly Chlorinated Biphenyl) stands for a class of 209 organochlorine chemicals existing as molecules called congeners. They are a class of non-polar chlorinated hydrocarbons with a biphenyl nucleus of which one or more of the 10 Hydrogen atoms are replaced with chlorine. They have a general formula C12H10-nCln where n may range from 1 to 10. The complete names of the congeners as per the IUPAC nomenclature are rather unwieldy, and hence the congeners are referred to by researchers with simpler and shorter names, using numerical codes, brand names, or abbreviations. The chemical formula of 3,3’,4,4’,5- pentachlorobiphenyl, better known as PCB 126, is C12 H7Cl5. PCB congeners are odorless, tasteless, clear to pale-yellow, viscous liquids. PCBs were widely used as dielectric and coolant fluids, for example, in transformers, capacitors, and electric motors, and have found their way into water bodies through various routes of pollution.

PCB 126 is not soluble in water. A stock of the test solution was therefore prepared using 1 mg /ml of PCB 126 with Dichloromethane (MERCK) as an organic solvent and then diluted for use as per requirement. The test organisms were then exposed to varying concentrations of each solution by performing acute bioassays at 24, 48, 72, and 96 h intervals. PCB 126 of Dr. Ehrenstorfer (Germany) make used for the present work.

A sub-lethal concentration, based on the LC50 values obtained during acute bioassay, was arrived at. Based on these values, a sub-lethal concentration of the substance under study was determined, and further chronic toxicity tests were carried out on the test fish over 30 days, using a continuous flow-through method, with tissue samples taken at intervals of 5, 10, 15, 20, 25 and 30 days.

Analysis of the effects of various pollutants has been carried out using various methods. There are many references available in the literature on the use of bioassays for evaluation of soil and sediment toxicity 1-4, and integrating bioassays with other techniques using fish and invertebrates to assess environmental risks and damage 5-8. However, few references are available for bioassays using the pollutant substance for direct exposure of test organisms. Bioassays to determine acute toxicity after 96 h exposures to determine LC50 values 9, and use of continuous flow-through bioassays 10, are some of these methods.

The use of GC and GC-MS to estimate the degree of bioconcentration has been widely accepted 11, 12. Literature available confirms that PCBs are toxic and bioaccumulate in organisms 13-24.

The study was carried out first with the help of acute bioassays of 96-hour duration to determine LC50 values as per standard methods available in literature 25, 26, and based on such values, a subsequent chronic bioassay of 30 days using a dosing apparatus with a continuous flow through method 27 was carried out. A sublethal dose of 12.5 µg l-1 of PCB 126 was introduced into the water for each fish species under study daily, over 30 days, using a continuous flow-through method. Appropriate controls were also run in parallel.

Studies show that the path followed by pollutant substances through the fish begins with entrance through the gills or the mouth into the alimentary canal, followed by absorption or accumulation, metabolism by the liver, transfer of pollutants or their metabolites to the liver, and, finally, excretion through kidneys. PCBs are seen to bioaccumulate in both plant and animal biota 28-34 and expose man 35-40, who is at the end of many food chains, too much higher levels as compared to trace levels present in the environment. There are indications that chronic exposure to PCB mixtures (Aroclor 1254) may lead to toxicity, and the PCBs may persist in fish tissues for about 3 months 41. Such bioaccumulation may lead to carcinogenic and other deleterious effects in men 42-48. This has recently resulted in a quest for remediation of the effects of PCBs and similar pollutants in the environment 49-50.

The intestine tissue of the test organisms, i.e., freshwater fish Rasbora daniconius and Puntius ticto were obtained every 5 days over a period of 30 days. Tissues were weighed, and extracts were obtained after clean up using Dichloromethane through Celite columns. Analysis of these extracts, using GCMS for analysis, has shown bio-accumulation of the above compounds in different tissues over a period of time.

Observations: A significant bioaccumulation of PCB 126 was observed on analysis of the intestine tissues of Rasbora daniconius and Puntius ticto, as is evident from the Chromatograms obtained after analysis of tissue extracts on GC-MS Fig. 1 and 2.

A comparison of the values of bioaccumulation in both fish is shown in Table 1.

TABLE 1: BIOACCUMULATION OF PCB 126 IN INTESTINE OF RASBORA DANICONIUS AND PUNTIUS TICTO

A graphical representation of the accumulation of PCB 126 in the four tissues studied has been given in Fig. 3. 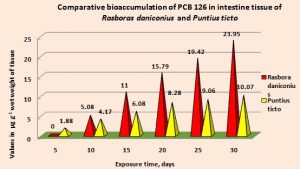 FIG. 3: GRAPHICAL COMPARISON OF BIO-ACCUMULATION OF PCB 126 IN INTESTINE TISSUE OF RASBORAS DANICONIUS AND PUNTIUS TICTO

RESULTS: Fish may be subject to direct exposure to pollutants at the site of the alimentary canal, where pollutants would enter through or with food. In the present study, it can be inferred that pollutants bioaccumulate within the intestine tissue of fish.

PCB 126 was seen to accumulate to a lesser extent in Puntius ticto as compared to Rasbora daniconius, indicating that the biotransformation pathways in the former are more efficient than the latter and that PCB 126 may be metabolized through the intestine tissue to subsequent sites such as the liver and kidney, more in case of Puntius ticto than in case of Rasbora daniconius.

CONCLUSION: In conclusion, it can be said that the bioaccumulation of PCB 126 in the intestine tissue of the fish species studied gives an indication of the propensity of the pollutant to accumulate in tissue, albeit to varying extents. This may therefore serve as a warning for controlled use of PCBs and their proper disposal, failing which, they are sure to reach man through various types of food chains and cause deleterious effects on health.

ACKNOWLEDGEMENT: I am grateful for the support and invaluable guidance of Late Dr. Shanta Satyanarayan, Retd. Deputy Director, NEERI, Nagpur in performing the above work.

CONFLICTS OF INTEREST: I hereby declare that there is no conflict of interest with any other person, institution or authority in the performance of the above work.