ABSTRACT: The study was carried out to assess the antibacterial & cytotoxic activities of extracts from leaf parts of the plant, Averrhoa bilimbi. Ethanol, methanol and water were used as solvents and antibacterial & cytotoxic effects were measured using disc diffusion test & brine shrimp lethality bioassay (BSLB). The susceptibility of the microorganisms to the extracts of this plant was compared with standard antibiotic cefadroxil. Water extract exhibited more potent antimicrobial activity by inhibiting wide range of gram positive and gram negative bacteria in comparison to ethanolic and methanolic extract of leaves of A. bilimbi. On the other hand, the ethanolic extract of A. bilimbi leaves( EEL) was found to be the most toxic to Brine Shrimp nauplii, with LC50 of 3.7 μg/ml whereas anticancer drug vincristine sulfate (VS) proved LC50 value 1.73 μg/ml indicating that the potent cytotoxic  compounds in this plant have affinity for non- polar solvents. The spectrum of activity observed in the present study may provide the indication that the plant could be a possible source to obtain new and effective antibacterial & cytotoxic agents. Hence further study should be needed for the isolation of the therapeutic antibacterials & cytotoxic agents from the leaves extract of A. bilimbi

INTRODUCTION:The use of plant and its products has a long history that began with folk medicine and through the years has been incorporated into traditional and allopathic medicine. Since antiquity, many plants species reported to have pharmacological properties as they are known to possess various secondary metabolites like glycosides, saponins, flavonoids, steroids, tannins, alkaloids, terpenes which is therefore, should be utilized to combat the disease causing pathogens 1.

The number of multi-drug resistant microbial strains and the appearance of strains with reduced susceptibility to antibiotics are continuously increasing. This increment has been attributed to indiscriminate use of broad-spectrum antibiotics, immunosuppressive agent, intravenous catheters, organ transplantation and ongoing epidemics of HIV infection. In addition, in developing countries, synthetic drugs are not only expensive and inadequate for the treatment of diseases but also often with adulterations and side effects.

Therefore, there is need to search new infection-fighting strategies to control microbial infections 2. BSLB represents a rapid, inexpensive and simple bioassay for testing plant extract lethality which in most cases correlates reasonably well with cytotoxic and anti-tumour properties 3.

Medicinal plants have been used as traditional treatments for numerous human diseases for thousands of years and in many parts of the world. Hence, researchers have recently paid attention to safer phytomedicines and biologically active compounds isolated from plant species used in herbal medicines with acceptable therapeutic index for the development of novel drug 4, 5.

A. bilimbi of oxalidaceae family is medicinally used as a folk remedy for many symptoms. It is used as antibacterial, antiscorbutic, astringent, post–partum protective medicine. It is also used for the treatment of fever, mumps, pimples, inflammation of the rectum and diabetes, itches, boils, rheumatism, syphilis, bilious colic, whooping cough, hypertension, stomach ache, aphthous ulcer and as a cooling drink .The chemical constituents of A. bilimbi include  amino acids, citric acid, cyanidin–3–O–h–D–glucoside, phenolics, potassium ion, sugars , vitamin A6.

Previous phytochemical investigations showed that chloroform extracts of A. bilimbi’s leaf and fruit have antibacterial activity against the Gram positive S. aureus, S. epidermis, B. cereus, K. rhizophila, C. diphteriae and Gram-negative S. typhi, C. fuendii, A. hydrophila and P. vulgaris7. The present study was aimed to evaluate the comparative antibacterial screening of various extracts (ethanol, methanol and water) of leaves of Averrhoa bilimbi against some Gram-positive and Gram-negative strains of bacteria and also to evaluate the cytotoxic activity.

Preparation of the Plant Extracts: Dried plant material (180g) was used for extraction procedure. The extracts were all made with analytical grade solvents (Merck). The leaves were washed thoroughly 2-3 times with running water and once with sterile distilled water to remove the dust particles and then dried under shade for a period of 7 days. The dried plant materials were then ground into fine powders using a laboratory grinding mill. Plant samples were extracted with 800 ml of ethanol, methanol and water separately using a Soxhlet apparatus following hot extraction procedure. Then the extract was filtered using Whatman No.1 filter paper. The filtrates were then dried in hot air oven at 40oC. Then the extracts were stored under refrigeration at 4oC for further studies.

Preparation of Standard Culture Inoculum of Test Microorganisms: Three or four isolated colonies were inoculated in the 2 ml nutrient broth and incubated till the growth in the broth was equivalent with Mac-Farland standard (0.5%) as recommended by WHO.

Antimicrobial Assay: Agar disc diffusion is a widely accepted in vitro investigation method for preliminary screening of test microorganisms 9. The required amount of Petri plates is prepared and autoclaved at 121°C for 15 minutes. And they were allowed to cool under laminar air flow. Aseptically transfer about 20 ml of media into each sterile Petri dishes and allowed to solidify. 1 ml inoculum suspension was spread uniformly over the agar medium using sterile glass rod to get uniform distribution of bacteria. The readily prepared sterile discs were loaded. The paper diffuse discs were placed on the medium suitably apart and the plate were incubated at 5°C for 1 hour to permit good diffusion and then transferred to an incubator at 37°C for 24 hours. The antimicrobial activity was recorded by measuring the width of the clear inhibition zone around the disc using zone reader (mm).

Cytotoxic Assay: The experiment was carried out using the method described by Meyer et al 10. In brief, Artemia salina Leach (brine shrimp eggs) was allowed to hatch and matured as nauplii (Larvae) in seawater for 48 hrs at 250C. Serially diluted test solutions were added to the seawater, containing 10 nauplii. After incubation for 24 h at 25oC, the number of survivors was counted. Vincristine sulfate was used as positive control.

The effects of antimicrobial screening of different extracts of A. bilimbi have been presented in table 2. The crude extracts of plant showed moderate antibacterial activity. All the plant extracts showed dose dependent inhibition. Among the extracts, Water extract showed maximum efficacy against most of the bacteria and satisfactory inhibition against Gram-positive bacteria selected. The standard, cefadroxil exhibited significant zone of inhibition against all the test organisms. Among them, Gram-positive bacteria were inhibited more than Gram-negaitive bacteria by cefadroxil, B. subtilis being the most.

Polyphenols have been reported to exhibit antibacterial activities with distinguished characteristics 11. The inhibition of microorganisms by phenolic compounds may be due to iron deprivation or hydrogen bounding with vital proteins such as microbial enzymes 12. Water extract of A. bilimbi has been shown superior antibacterial activity than other extracts. This may be due to the presence of alkaloid, steroid and some polyphenolic compounds present in this extract.

TABLE 1: PHYTOCHEMICAL SCREENING OF VARIOUS EXTRACTS OF LEAVES OF A. BILIMBI.

TABLE 2: ANTIBACTERIAL ACTIVITY OF DIFFERENT EXTRACTS A. BILIMBI. AT DIFFERENT CONCENTRATION AND STANDARD AT 10mg/disc

In case of Brine shrimp lethality bioassay, Ethanolic extract of leaves (EEL) was found to be the most toxic to Brine Shrimp nauplii, with LC50 of 3.7 μg/ml whereas the anticancer drug vincristine sulfate(VS) showed LC50 value 1.73 μg/ml. The high toxicity of EEL part probably attributed to the alkaloid that is confirmed in phytochemical screening. The order at which cytotoxic potential of the test samples decreased was as follows:

Vincristine sulphate > EEL > MEL > WEL. All the data found from brine shrimp lethality bioassay and  statistical analysis are presents in Table 3 to Table 10 and Figure 1-4. 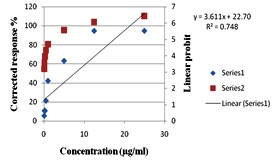 FIG-1: CYTOTOTOXICITY EFFECT OF VS 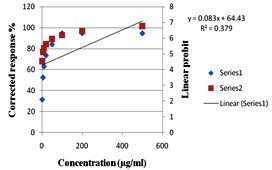 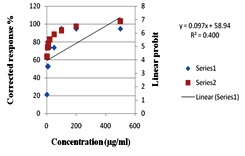 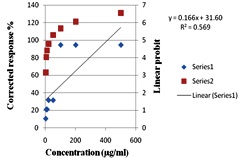 From the above data, it is clear to us that as the polarity of solvent of extraction increases, brine shrimp toxicity decreases. This implies that most of the potent cytotoxic compounds in this plant have affinity for non- polar solvents and are more effectively extracted by these solvents. During toxicity evaluation of plant extracts by BSLB, Meyer et al., 1982 described that LC50 values lower than 1000 μg/ml are considered bioactive10. Concentration dependent increment in percent mortality of brine shrimp naupliiproduced by the A. bilimbi indicates the presence of cytotoxic principlesin these extractives. Preliminary phytochemical screening revealed the presence of alkaloids and steroids. So the observedcytotoxic action may be due to the presence of such compounds. There may be correlation between BSLB and antibacterial properties that could be deduced in this study..

CONCLUSION: In conclusion, the extracts of A. bilimbi have moderate & potent actions as antibacterial & cytotoxic agents. This finding provides an insight into the usage of the plant in traditional treatment of antibacterial, antiscorbutic, astringent, post–partumprotective medicine, itches, boils, syphilis, bilious colic, whooping cough, stomach ache, aphthous ulcer and other diseases associated with bacterial infection which could be of considerable interest to the development of new drugs through the isolation of active antibacterial & cytotoxic principles from the leaves of A. bilimbi.

ACKNOWLEDGEMENTS: The authors would like to thank Kalyan Kumar Biswas, Jahangirnagar University, Savar, Dhaka, Bangladesh for technical support throughout the study.