ABSTRACT: Introduction: Proteolytic enzymes like serratiopeptidase, trypsin and chymotrypsin are used for prolonged period for edema resolution in post-operative patients, arthritis, tooth extraction etc. either alone or with other anti-inflammatory agent. Various trials have supported and refused the role of enzymes as anti-inflammatory agents. No study was found for analgesic property of proteolytic enzymes. Aims: This study was designed to investigate the anti-inflammatory and analgesic activity of these three proteolytic enzymes alone and in combination with diclofenac at therapeutic doses. Methods and Material: Carrageenan induced paw edema was used for acute inflammation. Edema was measured with the help of plethysmometer at 0 hour and 3 hour. Modified formalin test was used to evaluate the analgesic property. 1% formalin was injected into the forepaw and scoring was done by appropriate and standard method. Statistical Analysis: Edema changes of hind paw and licking duration in seconds of a fore paw with different treatments were compared with one-way ANOVA followed by Tukey-Kramer multiple comparison test with the help of graph pad instat software. Result: Reduction in edema was significant (p<0.05) with proteolytic enzymes alone as well as in combination with diclofenac. Neither phase of formalin test was reduced significantly by proteolytic enzymes alone although second phase was reduced significantly when combined with diclofenac. Conclusion: Serratiopeptidase, trypsin and chymotrypsin has significant anti-inflammatory activity alone as well as in combination with diclofenac. These proteolytic enzymes do not have any analgesic activity but they potentiate the peripheral analgesic activity of diclofenac at therapeutic equivalent doses.

Various clinical trials have confirmed the role of serratiopeptidase as anti-inflammatory agent. Serratiopeptidase and chymotrypsin is used to control inflammation in airway diseases, osteoarthritis, carpal tunnel syndrome, dental extraction and cataract surgery alone and in combination with other agents 4, 9. These proteolytic enzymes are commonly used in combination with conventional NSAIDs like diclofenac. Serratiopeptidase, trypsin and chymotrypsin are studied alone as well as in combination with NSAIDs for their anti-inflammatory property but not for their analgesic property. So this study was primarily aimed to evaluate whether these proteolytic enzymes have anti-inflammatory and analgesic property alone and synergistic activity with diclofenac at therapeutic doses as claimed?

The study protocol was approved by institutional animal ethics committee. Wistar albino rats of either sex weighing 200-300gms were used for the study. Animals were housed in a room with the temperature at 25+10C with alternating 12 hour light dark cycle. They were subjected to standard diet and water ad libitum.

Trypsin and chymotrypsin, Serratiopeptidase and Diclofenac were used in the study.

The therapeutic doses of all the drugs were converted to rat equivalent with the help of conversion table 10, 11. All the drugs were dissolved in normal saline. To study anti-inflammatory and analgesic activity rats were divided into fourteen groups, seven for both property and each group containing six rats. All the treatments were given orally with the help of the rat gavage canula. As trypsin and chymotrypsin are available in combination in market, here also they were used in combination.

To study anti-inflammatory activity, carrageenan induced rat hind paw edema model was used 12. 0.1ml of 1% λ-Carrageenan made into normal saline was injected into subplanter space in the right hind paw of all rats. The rats were marked with black ink at right lateral malleolus.  Drugs dissolved in normal saline were given half an hour before the injection of carrageenan. Paw volumes of all the rats were measured before giving an injection of carrageenan which was considered as 0 minute reading. The second reading was taken at 3 hours. Percentage inhibition was calculated by using the following formula 13:

Eqn. l: Percent swelling = (V-Vi/Vi) ×100, where V is the paw volume 3 h after the carrageenan injection, and Vi is the initial paw volume. The average paw swelling in the group of the drug-treated rats were compared with control rats and the percent of inhibition of the edema formation was determined using,

Modified formalin test in rats was used to study analgesic activity 14. Animals show two phases (biphasic) of nociceptive behavior involving two different stimuli when formalin is injected. The first phase starts immediately after injection of formalin and lasts for 3-5minutes. This occurs due to chemical stimulation of nociceptors causing C-fiber activation. Second late phase starts after 15minutes of formalin injection and last for 20-40minutes. This phase appears due to combination of an inflammatory reaction in the peripheral tissue 15.

Pain intensity was rated according to following numerical scale 16.

T0 - Both fore paws are placed on the floor and weight is evenly distributed.

T1 - The injection paw rests lightly on the floor or on another part of the animal’s      body and little or no weight is placed upon it.

To study analgesic activity 0.05 ml of 1% formalin was injected in right front paw of rat subcutaneously. Seven groups were used for this study. Rats were given above described treatments thirty minutes before injecting formalin.

The rats were observed for 60 minutes after the injection of formalin and the amount of time (second) spent in each scale (0, 1, 2 and 3) was recorded. Ratings are averaged over five minute block. Numerical ratings are calculated from the following formula:

Where T1, T2 and T3 are durations in seconds spent in each five minute block.

Edema changes of the hind paw (anti-inflammatory activity)  and licking duration in seconds (analgesic activity) of a fore paw with different treatments were compared with one-way ANOVA followed by Tukey-Kramer multiple comparison test with the help of graph pad instat software.

n=6 in each group

*- significant compared to the control 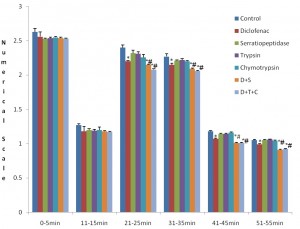 n=6 in each group

Analgesic property of these proteolytic enzymes has not been explored. The modified formalin test was used because it allows even weak analgesics to be detected. It shows phase-1 and phase-2 due to stimulation of nerve endings and inflammation respectively. Analgesics like opioids are effective in inhibiting the phase-1 while NSAIDs like analgesics are effective in inhibiting phase-2 15, 16.  Results of analgesic property by modified formalin test shows that they are not effective analgesics as neither phase of biphasic response were suppressed significantly except slight lowering of second phase. This suggests that they have poor peripheral analgesic action. The mechanism may be inhibition of bradykinin synthesis which may interfere with sensitization of peripheral nerve endings which leads to mild peripheral analgesic action 19. Addition of these proteolytic enzymes to diclofenac leads to greater analgesia as their analgesic action adds up.

CONCLUSION: The observation of the present study indicates that serratiopeptidase, trypsin and chymotrypsin   have anti-inflammatory activity at therapeutic doses but they are not effective as analgesic. Combination of these proteolytic enzymes with diclofenac should be preferred over only proteolytic enzymes as greater anti-inflammatory and analgesic action is achieved.

ACKNOWLEDGEMENT: We are very thankful to our colleagues and teachers for their constant support during present research.