A COMPARISON OF VOLATILE COMPOUNDS IN DIFFERENT GENOTYPES OF SESAMUM INDICUM L. BY GC-MS

A COMPARISON OF VOLATILE COMPOUNDS IN DIFFERENT GENOTYPES OF SESAMUM INDICUM L. BY GC-MS

ABSTRACT: The aim of the present study was to investigate the oil composition extracted from Sesamum indicum seeds. The oil was extracted from seeds by soxhlet method and analyzed by gas chromatography-mass spectrometry (GC-MS). A total of 84 different components were identified and out of which 12 are fatty acid components. The principal compounds identified and present in all samples were silane, trimethyl[5-methyl-2-(1-me thylethyl)phenoxy]-; silicic acid, diethyl bis (trimethylsilyl)ester; stearic acid; oleic acid; n-Hexadecanoic acid;  myristic acid; indole-2-one 2,3-dihydro-N-hydroxy-4-methoxy-3,3-dimethyl-; cyclotrisiloxane, hexamethyl-; acetamide, N-[-4-(trimethylsilyl)phenyl]-; benzene, 2-[(tert-butyldimethylsilyl)oxy]-1-isopropyl-4-methyl-; benzo[h]quinoline, 2,4-dimethyl-, trichloroacetic acid undec-2-enyl ester and 2-Ethylacridine. Among fatty acids, palmitic acid and oleic acid were identified in highest concentration. In comparison, myristic acid and stearic acid were present in lesser amount. Variation was found between chemical compositions of different genotypes of sesame. The obtained results supported the use of seed oil as edible oil and in pharmaceuticals. This study is also important as identification of volatile compounds in Indian genotypes of Sesamum indicum was done for the first time.

INTRODUCTION:Sesame (Sesamum indicum L.) belongs to Pedaliaceae family, is one of the most ancient oilseeds crop. It was domesticated on the Indian subcontinent during Harappan era 1 but now in all tropical and subtropical countries.

India is the leading producer in the world and sesame is the third most important Indian oil seed crop 2.

It is known by different names in different countries such as til (Hindi), huma (Chinese), sesame (French), goma (Japanese), gergelim (Portuguese) and ajonjoli (Spanish). It is cultivated for its high edible oil content and protein.

The edible oil is highly valuable and has certain industrial applications including human nutrition such as pharmaceuticals, cosmetics, perfumery, soaps, paints and insecticides, hair oil, hydrogenated oil and certain medicines 3.

It is called queen of the oilseeds crops because of its high oil content, mildness and pleasant taste 4. The oil is free of unwanted odors and rancidity resistant and has high level of unsaturated fatty-acids which makes it suitable for cooking 5.

From medicinal point of view, sesame oil has numerous functions such as antiaging, lowers serum lipid, blood pressure and other functions7. The genetic and environmental factors affect oil content and fatty acid composition in sesame8. GC/MS appears an ideal technique for the detection of fatty acids and their concentrations. There are few reports on fatty acid composition analysis of sesame oil in India 9-11. But there is not any report on chemical characterization of sesame oil so far in India. The purpose of the present study was to investigate the chemical compounds present in sesame oil and comparison of chemical composition of sesame oil between different Indian sesame genotypes. This will further increase its medicinal and cosmetic importance and resultant its production.

Plant Material: Seeds of Sesamum indicum were collected from different states (Rajasthan, Uttar Pradesh, Madhya Pradesh, Punjab, Tamil Nadu and Gujarat) of India as illustrated in Table 1. Seeds were made clear of foreign particles like dust particles and sand.

TABLE 1: LIST OF SESAMUM INDICUM L. GENOTYPES USED ALONG WITH THEIR PLACE OF ORIGIN

Oil extraction: 5 gram grounded seeds were placed into a cellulose paper cone and extracted using light petroleum ether (b.p. 40-60°C) in a Soxhlet extractor for 8 hrs 12. The oil was then recovered by evaporating of the solvent using rotary vacuum evaporator and residual solvent was removed by drying in an oven at 60°C for 1 hour.

GC-MS analysis: Agilent 6890 gas chromatograph coupled with 5975B mass spectrometer was used for GC-MS analysis. The chromatographic separation of analytes occurred on a capillary column of fused silica HP-5ms (0.25mm x 30m x 0.25 µM). The oven programming was maintained at 50°C 13. 1 µl of extract was injected in the split mode (1:50) at 280°C. The mass spectrometer was operated in electron impact mode. The mass scan range was m/z- 40 to150 atom mass units (amu). All the mass spectra of the identified peaks were compared with the spectra from the NIST’05 and WILAY spectral library. The compounds were reported as percentage of the total area of their peaks in the total ion chromatogram.

RESULT AND DISCUSSION: The GC-MS chromatogram of volatile oil samples revealed the presence of 84 compounds, which were identified in comparison to the fragmentation patterns in the resulting mass spectra with those published in literature and using the National Institute of Standards and Technology (NIST), Mass Spectral Database of the gas chromatograph–mass spectrometer. A number of other compounds were also detected but not of good quality. The maximum number of compounds was found in T13 genotype. The chemical names with retention time (RT) and peak area (%) of the compounds which were detected was given in Table 2. 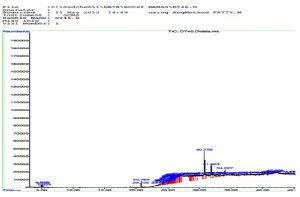 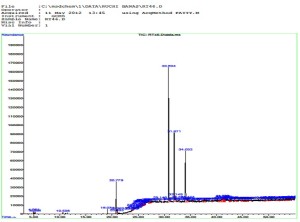 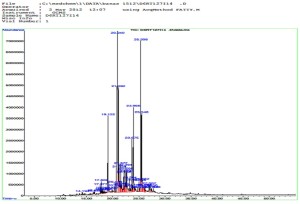 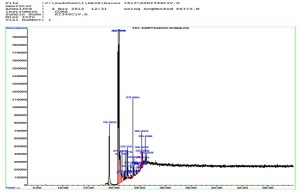 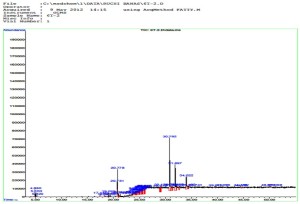 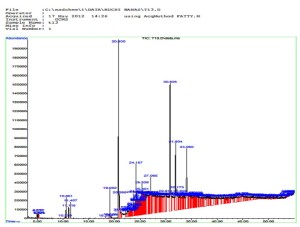 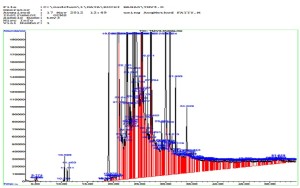 Likewise, the oil content and fatty acid composition of eleven genotypes of pot marigold (Calendula officinalis L.) seeds were determined14. In the present study a wide variation was found between chemical compositions of different genotypes of sesame. It was supported by literature which stated that chemical composition of volatile oils could differ widely within the same species depending on several factors such as the ecological niches, climatic conditions and trophic level 15, 16.

Similar studies had been done previously in sesame oil and more than 400 components have been isolated and identified including pyrazines, pyridines, pyrroles, furans, thiophens, thiazoles, carbonyl compounds and others 17, 18.

The current study will offer a sound basis of selection of genotypes which are chemically complex and help in effective utilization of sesame. And it laid a foundation for searching chemical compound’s nature and application for pharmaceutical, cosmetics and food industry.

ACKNOWLEDGEMENT: Financial support given by Department of Science and Technology, Jaipur, Rajasthan is gratefully acknowledged.