Free radicals are also beneficial components of inflammatory response and hepatic cytP450 mediated detoxification. These free radicals generated at the site of inflammation serves as a part of defensive mechanism by harming the invading pathogens. The generation of free radicals persisted even after the defensive role results in the more deleterious complications. In such conditions regulation of these free radicals is equally important. A lot of researches are going on worldwide directed towards finding natural antioxidants of plants origins. Studies have shown that many of these antioxidant compounds possess anti-inflammatory, antiatherosclerotic, antitumor, antimutagenic, anticarcinogenic, antibacterial, and antiviral activities 3, 4, 5.

In India, the use of different parts of several medicinal plants to cure specific ailments has been in vague from ancient times. Therefore, now there is a need to look back towards the traditional medicine which can serve as novel therapeutic agent. Active research has been driven in recent years on plant components due to their biologically beneficial effects emanating from antioxidant activities of phenolic phytochemicals. The antioxidant activity is mainly due to the presence of phytochemicals such as phenolics, flavonoids and anthocyanins.

The aim of this study was to evaluate the phytochemicals qualitatively and quantitatively and analysis of in vitro antioxidant activities of acetone extracts of the three medicinal plants Sida cardifolia, Phyllanthus amarus and Adathoda vasica. The entire plant of Sida cardifolia is used in making traditional medicine for inflammations, bleeding disorders, fevers, delirium and urinary problems. Phyllanthus amarus has also shown to work as an antifungal, antibacterial, antiviral agent, stomachic, diuretic, febrifuge and antiseptic. Adathoda vasica leaves have been used extensively in Ayurvedic Medicine for over 2000 years primarily for respiratory disorders. The leaves are boiled and combined with honey, ginger and black pepper to treat coughs and respiratory ailments.

The leaves of Sida cardifolia, Phyllanthus amarus and Adathoda vasica were collected from   local places of Mysore. The leaves were separated manually, dried, powdered and stored in airtight containers until further studies.

Preparation of Extract: 10 g of each powder was extracted in 20ml of acetone by stirring using a magnetic stirrer at cold condition for 4 hours. The extracts were centrifuged at 10,000rpm for 10 minutes and then filtered through Whatman no.1 filter paper for removal of particulates. The residues obtained were re extracted with another 20ml of acetone and again the process was repeated. The acetone extracts of different parts were pooled separately and concentrated under vaccum at 40°C.  The yield was calculated and expressed as percentage of w/w.

Preliminary phytochemical screening: The qualitative analysis of acetone extracts for the presence of various phytochemicals was carried out using the standard procedures with little modifications 6, 7.

The concentration of total Phenolics in the acetone leaf extracts of Sida cardifolia, Phyllanthus amarus and Adathoda vasica was determined by the Folin-Ciocalteu assay that involves reduction of the reagent by phenolic compounds, with concomitant formation of a blue complex, its intensity at 725nm increases linearly with the concentration of phenolics in the reaction medium 8. The phenolic contents of the extracts were determined from calibration curve and were expressed in mg gallic acid equivalent/g of extract powder.

Carbohydrate content of all the extracts at 100µg concentration was determined by the phenol-sulphuric acid method.

Aluminum chloride colorimetric method was used for flavonoids determination9. The content was determined from extrapolation of calibration curve which was made by   preparing gallic acid solution (0-0.8 mg/ml) in distilled water. The concentration of flavonoid was expressed in terms of mg gallic acid equivalent/g of extract powder

The tannin concentration was determined for each extract variety following a modified version of  the vanillin-HCl method 11.

The reducing power of all the three acetone extracts was evaluated according to the method of Oyaizu 12.

2, 2-Diphenyl -1- picrylhydrazyl radical (DPPH.) was used as a stable radical for assessing antioxidant activity as described by Blios 13. Reduction of DPPH by an antioxidant or by a radical species results in a loss of absorption at 517nm. Thus the degree of discoloration of the solution indicates the scavenging efficiency of the added substances. Determination of antioxidant activity by the DPPH method was done for all the three acetone leaf extracts at 100µg concentration. Changes in the absorbance of the samples were measured at 517 nm. Radical scavenging activity was expressed as the inhibition percentage and was calculated using the formula:

Antioxidant activity of all three acetone extracts was performed using thio barbituric acid (TBA) according to the protocol of Halliwell and Gutteridge 14. Lipid peroxidation induced by ferric chloride resulted in the production of malondialdehyde (MDA), lipid peroxide. Thio-barbituric acid (TBA) reacts with malondialdehyde (MDA) to form a di-adduct, a pink chromogen, which can be detected spectrophotometrically at 532nm. 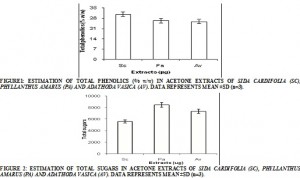 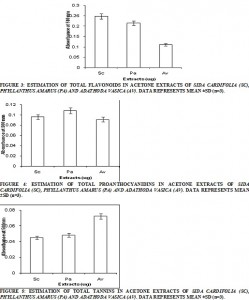 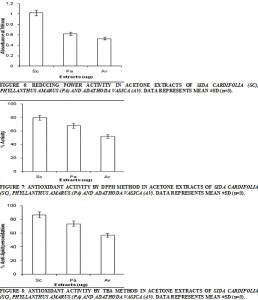 The plant products over synthetic compound in the treatment of diseases are needed because of no deleterious effects on man. India is a home to a variety of traditional medicine system that relay to a very large extent on native plant species for their raw drug materials. Therefore there is a need to look backwards towards folk medicines which can serve as novel therapeutic agent. Many secondary metabolites grouped under polyphenols, terpenes and alkaloids exhibit antioxidant activity. The free radical intermediates and ROS escape from the site of reaction and act on various biological molecules such as lipids, nucleic acids, proteins and carbohydrates, thus causing deleterious changes in their structure and function and finally leading to cell death13.

Phenolic compounds are naturally occurring secondary metabolites that are of great pharmacological interest. Total Phenolics was estimated for all the three acetone leaf extracts of Sida cardifolia, Phyllanthus amarus and Adathoda vasica at 100 μg concentration as shown in Figure 1. Out of the 3 acetone leaf extracts, acetone extract of Sida cardifolia with 1.53 mg gallic acid equivalent/g of extract powder showed maximum amount of Phenolics followed by the Phyllanthus amarus and Adathoda vasica with 1.325 and 1.29 mg gallic acid equivalent/g of extract powder. The phenols contain hydroxyls that are responsible for the radical scavenging effect mainly due to redox properties. These results gives a reason for the activity of these plants as antioxidant and how these plants extracts enable to scavenge the free radicals.

The acetone leaf extracts of Sida cardifolia, Phyllanthus amarus and Adathoda vasica was used for of total sugars estimation at 100 μg concentration as shown in Figure 2. The acetone extract Phyllanthus amarus with 8.45 µg glucose equivalent/g of extract powder showed maximum amount of sugars followed by the and Adathoda vasica and Sida cardifolia with 7.34 and 5.60 µg glucose equivalent/g of extract powder.

The total flavonoid content of all the three was 7.09, 6.14 and 3.14 mg gallic acid equivalent/g of extract powder as shown in Figure 3 with S. cardifolia acetone leaf extract maximum followed by P. amarus and A. vasica. These results gives a reason for the activity of these plants as antioxidant and how these plants extracts enable to scavenge the free radicals. Flavonoids exhibit various biological effects from their antioxidant properties.

The reducing capacity of a compound may serve as a significant indicator of its potential antioxidant activity. Figure 6 shows the reducing power activity of S.cardifolia, P.amarus and A.vasica extracts at 100 µg concentration using the potassium ferricyanide reduction method. At 100 µg concentration, the extracts showed absorbances of 1.024, 0.623 and 0.529 respectively at 700 nm. Thus, the highest reducing activity was observed in Sida cardifolia acetone leaf extract. The reducing power activity is due to the presence of reductones (Phenolics).

Free radical scavenging potentials of all the three acetone leaf extracts at 100 µg concentrations were tested by the DPPH method and the results are shown in Figure 7 S.cardifolia, P.amarus and A.vasica exhibited 80 %, 68 % and 52 % free radical scavenging activity respectively according to the DPPH method. DPPH is a stable radical that has been used to evaluate the antioxidant activity of rhizome extract. Antioxidant reacts with DPPH, which is a stable free radical, and converts it to α, α-diphenyl-β-picryl hydrazine. The degree of discoloration indicates the scavenging potentials of the antioxidant extract. The activity of extracts is attributed to their hydrogen donating ability. Increasing the number of hydroxyl or catechol groups increases radical scavenging activity. In presence of other H-donating groups (sulfhydryl, amide) in molecule also accelerates this activity.

The results of the effect of various leaf extracts at 100 µg concentration to prevent lipid peroxidation are shown in Figure 8. At 100 µg concentration, the S.cardifolia, P.amarus and A.vasica showed 87 %, 74 % and 57 % of inhibition of lipid peroxide generation by this method. Determination of the lipid peroxide content was carried out indirectly by means of derivatizing MDA with TBA at high temperature and acidic conditions. In biological systems, MDA is a very reactive species and takes part in cross-linking of DNA with proteins and also damages the liver cells. The production of lipid peroxides by ferrous/ascorbate systems in liver homogenates were inhibited greatly by the acetone leaf extract of S.cardifolia, P.amarus and A.vasica. If radicals initiate lipid peroxidation then the ability of antioxidants to scavenge radicals within the hydrophobic core of the membrane may explain their desirable therapeutic effect.

CONCLUSION: Thus acetone leaf extract of Sida cardifolia had maximum amount of polyphenols and flavonoids which is directly related to their greater antioxidant activity also. Thus active molecules present in the acetone leaf extract of Sida cardifolia has antioxidant property which may be useful in targeting the release of free radical intermediates along with the generation of ROS from various metabolic activities. They can be used for clinical development.

ACKNOWLEDGEMENT: The authors are very thankful to University Grants Commission, New Delhi, for financial assistance in the form of minor research project.