INTRODUCTION: Oral drug delivery is one of the oldest and most widely used routes for the administration of drugs for achieving local and systemic effects. In this, the conventional dosage forms are able to give an immediate release of drugs but they are unable to control the drug release and they cannot maintain effective concentration at the target site for a longer period of time. In turn, the bioavailability of drugs purely depends on the physicochemical properties of a drug, excipients, and many physiological factors 1,2.

Due to all these limitations of the conventional dosage form, researchers have concentrated on developing novel drug delivery systems (NDDS), which is a key area of (FR&D) pharmaceutical research and development. This NDDS controlled release drug delivery system has gained more importance because of its many advantages than conventional dosage forms.

Limitations: Moreover, in addition to these, there are certain limitations associated with these osmotic drug delivery systems they are.

Historical Background 14, 22: In the year 1955, two scientists Rose and Nelson used osmosis principle for the first time in drug delivery systems and they have developed an implantable pump that consists of three chambers.  In 1970’s Higuchi and Leeper developed and proposed a series of variations in the Rose and Nelson pump. Then in 1974, the scientist Theeuwes developed the first osmotic drug delivery concept; also he simplified the Rose-Nelson pump which was developed by Alza Corporation of the USA and also he developed an elementary osmotic pump and holds several patents and released many osmotic drug delivery system products in the market.

Later the Rose-Nelson pump was further simplified and developed by Higuchi and Theeuwes. And also, they have designed a tablet that contains a core surrounded by a semipermeable membrane that contains an orifice. In the 1980's the first two osmotic drug delivery products were released into the market; they are indomethacin, Osmosin and phenylpropanolamine. Osmosin, which is an elementary osmotic pump, was withdrawn from the market due to its large number of side effects. Zentner et al. in 1985-1991, Zentner and Rork in 1990, Appel and Zentner and Mcclelland et al. In 1991, they developed a controlled-porosity osmotic pump tablet as an oral drug delivery system. Later oral osmotic drug delivery system was further developed with two new designs one delivered 0.02 ml/day for 100 days and the other delivered 0.5 ml/ day for 4 days, both are used in pharmacological research, they are push-pull osmotic pumps (PPOP) it was developed for the application of poorly water soluble drugs to the targeted site and controlled-porosity osmotic pumps (CPOP) was developed to decrease the risk of drug induced irritation.

Moreover the release rate of the drugs from osmotic drug delivery devices depends on molecular weight, solubility and activity coefficient of the solute (osmogent). According to the Pfeffer experiment, it was reported that the membrane is permeable to water but the membrane-impermeable to sugars is used to separate a sugar solution from the pure water. He showed that the osmotic pressure π of the sugar solution is directly proportional to the concentration of the solution and absolute temperature. Later within a few years, Van't Hoff shows the comparison between these results and ideal gas law with the following equation.

Osmotic pressure for the concentrated solution of soluble solutes commonly used for controlled release formulation; their osmotic pressure can produce high water flow across the semipermeable membrane. The osmotic water flows through a membrane is given by equation.

Therefore this equation strictly says that the membrane is permeable to water, but it is impermeable to osmotic agents.

Rate of Drug Delivery from the Device Is Directly Proportional To The:

The Drug Release Is Inversely Proportional To: Concentration of polymer coating. Membrane thickness or weight gain.

Drug 13, 27: All drugs are not suitable to develop as an osmotic drug delivery device. Examples of some drugs that are suitable to develop into osmotic drug delivery are given in Table 2. Basic characteristics that are required for a drug to develop into osmotic drug delivery system are as follows. Should have a short biological half-life 2-6 h. It should be a highly potent drug. Solubility should not be either high or low. Drugs should be suitable for prolonged treatment. The drug should itself have an osmogenicproperty and should have a good aqueous solubility.  If the drug should not possess osmotic properties, then osmotic salts and other sugars are incorporated in the formulation.

The semipermeable membrane must meet some criteria, they are. It should be permeable to water. It should have sufficient wetting strength and wet modulus in order to retain its shape during the lifetime of the device. The Leakiness and reflection coefficient of an osmotic agent should approach the limiting value. Membrane should be biocompatible.

Osmotic Agent (or) Osmogen 25, 33, 35: Osmotic agents (or) Osmogen are the essential ingredients in the osmotic drug delivery formulation. These osmogents are the materials that are used to create osmotic pressure inside the system. Osmotic agents or osmogens protect the concentration gradient across the membrane. They also create a driving force for the uptake of water and helps in and also helps in maintaining drug consistency in the hydrated form. Upon the perception of biological fluid into the osmotic device through a semipermeable membrane, then the osmogents are dissolved in the penetrated fluids, so that the osmotic pressure is created, inside the pump where due to high osmotic pressure the drug or medicament which is present inside the device and pushes the medicament outside through delivery orifice, in a controlled manner.

The release rate from the device is purely based on the osmotic pressure that is created inside the device. So in order to maintain the drug release rate osmotic agents are added to the formulation. When the drug solubility is low, then it shows a zero-order release. The most commonly used osmogents are given in Table 2. Osmotic agents used in the formulation either alone or in combination (mixture) of osmogents. Different types of osmogents present are (1) Water-soluble salts of inorganic acids, (2) -soluble salts of organic acids, (3) Carbohydrates, (4) Water-soluble amino acids and organic polymeric Osmogens.

Wicking Agents 32, 42: Wicking agent is defined as the material that has the ability to pull up water into a porous network of the drug delivery device. Also, these wicking agents have the ability to increase the contact surface area of the drug with the incoming aqueous fluid. These agents are either swellable or Non-swellable in nature; different examples of wicking agents are mentioned in Table 2. And these are characterized by having an ability to undergo physisorption with water. The main function of this wicking agent is to carry water to the surface inside the tablet core by creating a channel. The use of these wicking agents in the drug delivery device is to enhance the drug release from the orifice of the device.

Coating Solvents 44, 46: Solvents that are suitable for making a polymeric solution is used in the preparation of coating material. The main function of these solvents is to disperse the polymer and other additives that are used for coating an osmotic device. Inert inorganic and organic solvents are used in the preparation of the outer layer or walls of osmotic drug delivery devices. Examples of different types of solvents are given in Table 2.

Plasticizers 47, 51: Plasticizers have the capacity to change the visco-elastic nature of the polymer, so these plasticizers are used in the coating membrane of the osmotic drug delivery systems.

Due to the addition of these plasticizers, the permeability of film may change. Plasticizers have the capacity to turn a hard and brittle polymer into a softer, more pliable material and possibly make the upper layer or film more resistant to mechanical stress. Different types of plasticizers are given in Table 2.

Surfactants 53: Surfactants are the agents that act by modifying the surface energy of resources to get better their blending into the compound and upload their reliability in the environment of use during the drug release period. Some examples of surfactants are given in Table 2.

Types of Osmotic Drug Delivery System 10, 27: There are two different types of osmotically controlled drug delivery system. They are as follows in Table 3. 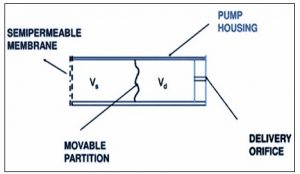 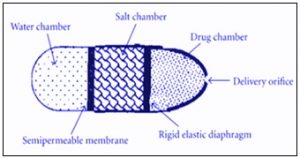 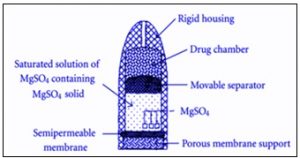 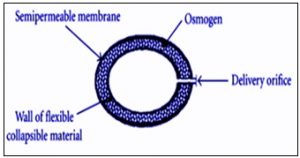 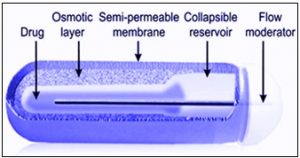 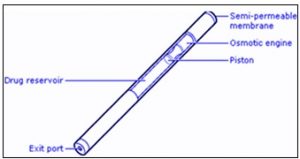 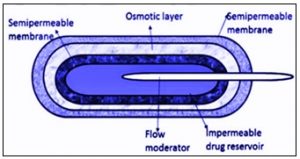 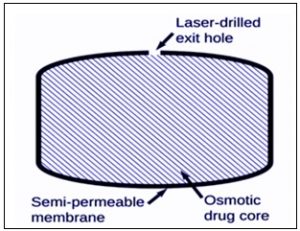 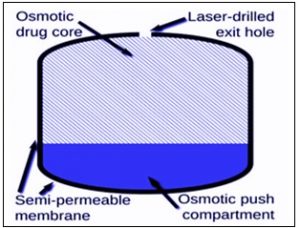 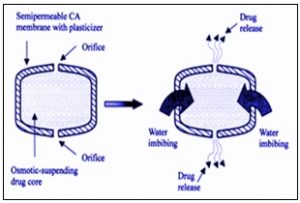 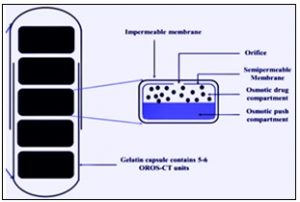