ABSTRACT: The aim of this review paper is to provide throughout the information of Manilkara hexandra (Roxb.) Dubard, used as a Khirni or Rayon in most of the tropical regions of India. It is native to India, mainly distributed as a wild tree in the southern part and North-central part of India. It is widely spread in Gujarat, Rajasthan, Madhya Pradesh, Andhra Pradesh, Kerala and Maharashtra our efforts are to collect valuable information with respect to morphology, microscopy, phytoconstituents and pharmacological aspect of the plant. The plant contains major phytoconstituents such as protobassic acid, 16-ahydroxyprotobassic acid, taraxerol, a triterpene ketone, alpha and beta-amyrin, cinnamates, alpha-sipnasterol, beta-sitosterol, its beta-D-glucoside, quercitol, quercetin and its dihydroderivatives, ursolic acid. Traditionally, the whole plant is employed as astringent, refrigerant, aphrodisiac, alexipharmic, stomachic, anthelmintic, for reliving fever, flatulence, colic, dyspepsia, helminthiasis, hyperdipsia, burning sensation. All these compounds claimed to possess various pharmacological properties such as antioxidant, antiulcer, anti-inflammatory, antidiuretic and so on.

INTRODUCTION: Manilkara hexandra (Roxb.) Dubard, synonym: Mimusops hexandra Roxb, widely spread in central India as well as Deccan Peninsula. It is cultivated throughout India covering major regions. It is also equated with Khirni. The fruits of the plant are one of the most underutilized fruits in the Gujarat state. It is popularly known as ‘Rayan 1.

It is widely spread in Gujarat, Rajasthan, Madhya Pradesh, Andhra Pradesh, Kerala, and Maharashtra 3. It is also found in Malaya; mainly grown in gardens. 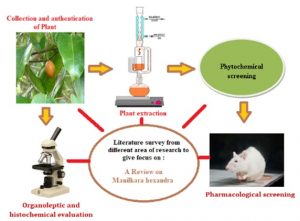 2.2 Cultivation, Collection and Harvesting: Propagation of the plant is usually done by seed germination, air layering or by vegetative propagation, including cutting. It is a tropical based crop. It can be grown very well at an altitude of 1000 m. Any type of soil is favorable for the growth of the plant. It can also be planted by rootstock. Sowing can be done during June-December. The space of 8 × 8 m must be recommended in between the crop for conventional planting. It requires proper irrigation soon after planting. Manures and fertilizers may be applied in the month of September-October, about 45 cm away from the trunk upto the leaf apex. The rootstock sprouts, water shoots, and lower branches should be removed after cultivation. The legumes and vegetable crops must be cultivated as intercrop during pre-bearing stage of cultivation. Farmyard manure can be preferable. The fertilizer must require appropriate amount of nitrogen, phosphorus and potassium. The mature fruits should be harvested by hand picking method in the month of February to June and September to October. Alternatively, fruits can be exposed to ethylene gas at 100 - 200 ppm for 18-20 h to induce ripening 4, 5.

3.1 Macroscopy Study: According to the Ayurvedic book, the organoleptic characters are as follow: 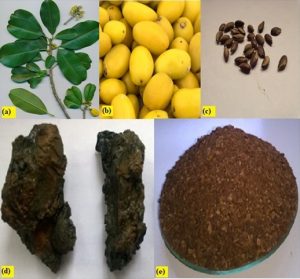 3.2 Microscopy Study: The macroscopical analysis of the plant has been mentioned in detail in Table 1 and Fig. 3. 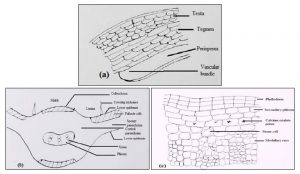 4. Phytochemistry: A new compound that has been identified by GC-MS was 7, 9-di-tert-butyl-1-oxaspiro (4.5) deca-6, 9-diene-2, 8-dione. The isolated compound showed antibacterial activity as it has high zone of inhibition in the range of 30 to 150 μg/ml. It is assumed that the isolated flavonoid has a great significance, used in the pharmacological applications as main components in the drug delivery system.

Catechin possessed a significant antioxidant activity and has unique biological behaviors, as it acts as a metal chelating agent also. 6 Fruits and seeds of the plant contain phenolic compounds, quercetin, and dihydroquercetin.

For the first time, Benzaldehyde derivatives are reported to present in the plant. Out of which, one compound named as 3, 4-dihydroxy benzaldehyde was active against Streptococcus aureus at a concentration of 500 µg/ml (zone of inhibition of 21.5 ± 0.70 mm) and another compound methyl-p-coumarate was found to be active against Streptococcus epidermidis (250 µg/ml level; zone of inhibition of 22 ± 1.41 mm).

As these compounds has a great significance in the treatment of skin infection. Isolation and purification of three bidesmosidic saponins from the seeds of the plant cultivated in Egypt, containing protobassic acid and 16-ahydroxyprotobassic acid as aglycones, showed significant anti-inflammatory, antioxidant and cytotoxic activity. Fruits and seeds of Rayan were analyzed for total phenolic and flavonoid content. Major phenolic compounds such as asgallic acid, quercetin, and kaempferol were obtained from fruits and quercetin, gallic acid, and vanillic acid from the seeds and were properly analyzed through LC-MS. The seeds also contain 16% of fatty oil and 1% saponin. 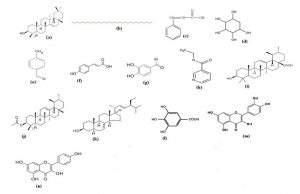 Although the other parameters were also evaluated such as homogeneity, color, pH, spreadability of the formulation, the results revealed that formulation containing 1% of gelling agent and 2.5% of the extract showed better stability 19.

Another investigation revealed the fact that the isolated flavonoid, 7, 9- di-tert-buty-1-oxaspiro (4.5) deca-6, 9-diene-2, 8-dione has antibacterial potency at a concentration from 30-150 μg/ml 20. Patel K et al., examined the antibacterial activity of the seed extract of the plant prepared from microwave-assisted extraction method. The study showed significant bactericidal action against Streptococcus mutans with a minimum bactericidal concentration in the range of 600-900 µg/Ml 21.

5.2 Antifertility Activity: Seeds of the crude drug have been evaluated for an antifertility property using male albino rats, where it has been observed that there is a markedly decrease in the sperm count of the animals 22.

5.3 Antimicrobial Activity: Antimicrobial activity of different leaf extracts of the plant, including petroleum ether, acetone, and methanol, has been tested against gram-positive bacteria, gram-negative bacteria, molds, and yeast. The activity was performed using the agar disc diffusion method at 250 and 500 μg/disc of concentrations. The methanolic extract exhibited maximum antimicrobial potency 23. Aqueous extracts of aerial parts of Euphorbia thymifolia and leaves of M. hexandra were evaluated for antimicrobial activity using well diffusion method against six different bacterial strains of Streptococcus mutans, Bacillus subtilis, Klebsiella pneumoniae, Proteus mirabilis, Salmonella bongori and Enterococcus faecalis and two fungal strains Candida albicans and Aspergillus niger. The extract of M. hexandra was found highly significant when compared to E. thymifolia plant extract 24. Another study has contributed to the utilization of M. hexandra leaf as an antimicrobial compound. Keshetti et al., experimented and showed that the plant extracts, namely petroleum ether, acetone, and methanol, has the potency to exhibit MIC in the range of 250-32,000 μg/ml.

Among all the extracts, methanol extract was found to show maximum antibacterial activity 25. The compounds of the plant isolated from the dried leaves and flowers, methyl-p-coumarate and 3, 4-dihydroxy benzaldehyde, are reported to be active against Streptococcus aureus and S. epidermidis 26.

5.4 Antiulcer Activity: Ethyl acetate extract of the plant was examined for the effectiveness of gastric ulcers using ethanol, ethanol-indomethacin, and pylorus ligated gastric ulcer models. It has observed that the extract can significantly reduce the lipid peroxidation in treated animals and also inhibit the increase in vascular permeability. Moreover, it has found that the pre-treatment with ethyl acetate extract increases mucus production and glycoprotein levels when given either orally or intraperitoneal, as there is an increase in the mucin content and TC: PR ratio, respectively 27.

5.5 Antidiabetic Activity: The ethanolic bark extract has tested for antidiabetic activity in streptozotocin-induced diabetes models in rats. In overnight fasted rats, NIDDM was introduced by streptozotocin (60 mg/kg, i.p). During the experiment, the extract dose was given at a single dose for twenty-one days, where it has observed that there is a marked reduction in the biochemical parameters such as serum levels of cholesterol, triglycerides, HDL, and LDL 28.

5.6 Antioxidant Activity: The antioxidant property of methanolic extract of fruits and seeds of the plant was measured using six different assays including, FRAP, DPPHRSA, ABTSRSA, HRSA, and NORSA, respectively. It has observed that fruits are considered as an excellent source of antioxidants, compared to seeds and showed the presence of phenolic components like gallic acid, quercetin, kaempferol, and vanillic acid, which are the richest source of antioxidant property 29. Another study showed the evidence of antioxidant activity of different fractions of leaf extract of M. hexandra, using DPPH, Fe3+reducing power assay 30 pharmacological activities, as shown in Fig. 5. 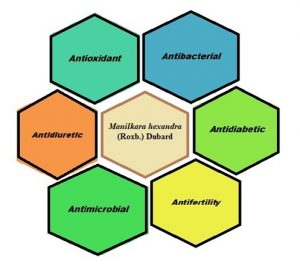 CONCLUSION: The plant belongs to Sapotaceae, is indigenous to India. The literature report revealed its use as an anti-inflammatory, antigout agent. Sometimes it can be employed in treating various diseases such as colic dyspepsia, hyper-dyspepsia. The fruits contain sugar, proteins, fats, carbohydrates, a minor proportion of calcium, iron and phosphorus, Vitamins A, B, and C, respectively. This comprehensive review will support many more properties and activities of the plant, which ultimately play an important role in building steps for further research activities. While gathering information with respect to the plant, it has been analyzed that the genus Manilkara holds a great potential of many other pharmacological properties, which has to be flourished in the recent upcoming years through among us.

ACKNOWLEDGEMENT: The authors are very thankful to the GLA University, Mathura, for support in the completion of the manuscript.