A COMPREHENSIVE REVIEW ON BENZOTHIAZOLE DERIVATIVES FOR THEIR BIOLOGICAL ACTIVITIES

A COMPREHENSIVE REVIEW ON BENZOTHIAZOLE DERIVATIVES FOR THEIR BIOLOGICAL ACTIVITIES

ABSTRACT: Benzothiazole derivatives have a wide interest because of their diverse biological activities and clinical use. This bicyclic compound consists of a fusion of benzene nucleus with a five-membered ring comprising nitrogen and sulphur atoms. It is a vital Pharmacophore and privileged structure in medicinal chemistry and exhibits various useful therapeutic activities such as anti-tubercular, antimicrobial, antimalarial, anticonvulsant, anthelmintic, anti-inflammatory, anti-tumor, anti-diabetic, analgesic, neurodegenerative disorders, local brain ischemia, and central muscle relaxant activities. Moreover, it can be easily found in a range of marine or terrestrial natural compounds that have tremendous biological activities. Benzothiazoles have a promising biological profile and are easy to access which makes this pharmacophore an interesting molecule for designing new bioactive benzothiazole derivatives.

INTRODUCTION: Heterocyclic compounds containing oxygen, nitrogen and sulphur atoms have been identified to have the most significant biological activities 1. Benzothiazole is a heterocyclic aromatic compound. The compound is bicyclic which consists of a fusion of benzene with thiazole ring. It is an important pharmacophore as benzothiazole and its novel analogs have been found to have a wide variety of therapeutic activities in medicinal chemistry 2 such as in anticancer 3-6, anti-HIV 6, antioxidant 7, anticonvulsant 8, trypanocidal agent 9, antitumor 10-13, antimicrobial 14, COX inhibitor 15, hypoglycemic 16, antidiabetic 17, antituberculosis 18, anti-urease 19 and inhibitor of α-glucosidase 20.

Benzothiazole is a six-membered bicyclic heteroaromatic compound in which benzene ring is fused to the 4- and 5-positions of thiazole ring. Benzothiazoles are found in marine as well as terrestrial natural compounds in a very less amount but have considerable pharmacological effects, where they act as aroma constituents of tea leaves and cranberries which are produced by fungi named Aspergillus clavatus and Polyporus frondosus. The fission yeast Schizosaccharomyces pombe is an important organism for the study of cellular biology.

As eukaryotes, these yeasts can be used to study processes that are conserved from yeast to humans but are absent from bacteria, such as organelle biogenesis or to study the mechanism such as transcription, translation and DNA replication, in which the eukaryotic components and processes are significantly different from their bacterial counterparts 21. The data can be calculated by DFT methods; its importance is given in various recent publications 22.

Various benzothiazole derivative such as 2-aryl benzothiazole is in the eyes of most scientists due to its diverse structure and its uses as radioactive amyloid imaging agents. It is reported that the isosters and derivatives of benzothiazole have antimicrobial activity against various types of gram positive and gram negative bacterias (e.g., E. coli, Pseudomonas aeruginosa, Enterobacter Staphylococcus epidermis, etc.). The various positions in the benzothiazole ring are indicated accordingly sulphur having 1 position as shown in the figure.

Some of the marketed drugs having benzothiazole derivatives are shown in Table 1.

Several Methods for Synthesis and Pharmacological Properties of Substituted Benzothiazole Reported in the Literature: Caleta I. et al. reported 2-amino-6-cyanobenzothiazole as antiproliferative agent 24. 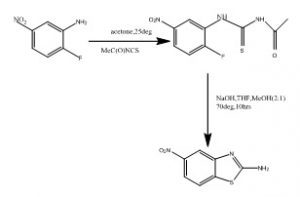 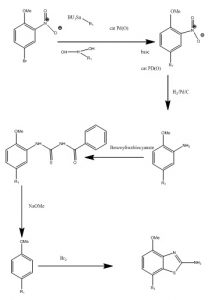 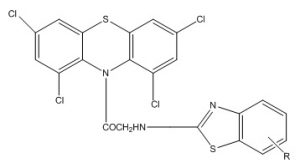 3. Some Other Method of Synthesis:

Homogeneous Catalysis: Homogeneous catalysis may be defined as the chemical reaction in which the catalyst and the reactants are in the same phase. The reaction can occur both in the solid and gas phase.

Acid Catalysed Reaction: Guo with his fellow members reported the acid catalyzed homogeneous condensation reaction containing 2-aminothio-phenol and substituted aldehyde in the presence of H2O2/HCl in ethanol at room temperature 36.

In the presence of acetic acid (AcOH) Sattler and his colleagues synthesize [5-(2,3-dihydro-1,3-benzothiazole-2yl-)oxolon-2-yl]methanol by the condensation of hydroxymethylfurfural (HMF) and 2-aminobenzenethiol 38. 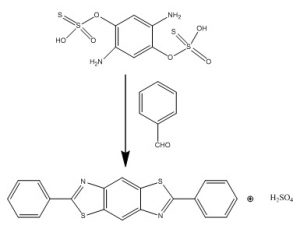 Base Catalysed Condensation: Maleki et al., using ammonium chloride as a base develops a method for the synthesis of 2-aryl benzothiazole by the condensation of 2-aminothiophenol with aromatic aldehydes. The solvent system used for this synthesis is methanol/water in the ratio 15:1 v/v at room temperature 40.

But as far as the studies methanol/water is considered as the best solvent system.

Accordingly, ammonium chloride is used as a base because it is cheap and readily available and is also a metal-free reagent. 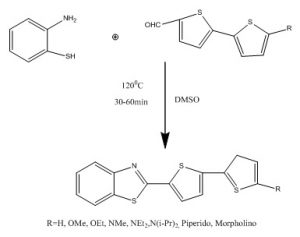 The major advantage is the use of PIFA which works both as Lewis acid and as an oxidant. Also it has wide substrate scope, short reaction time, microwave conditions and a good yield.

Dandia et al., demonstrated the synthesis of benzothiazoles by the condensation of 2-Phenyl-1H-indole-3-carboxaldehyde and 5-substituted -2-aminothiophenols in piperidine or para-toluene sulfonic acid (p-TSA) in ethanol (EtOH) or N, N-dimethylformamide (DMF) under microwave irradiation for 3-6 min at 240W 43. 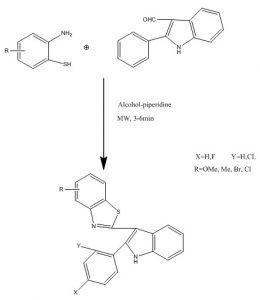 Paul et al., finds out an efficient method for the synthesis of 2-aryl benzothiazole by the condensation of 2-aminothiophenol with B-Chlorocinnam aldehydes under microwave irradiation using para-toluene sulfonic acid (p-TSA) 44. This reaction is meant to be environmentally friendly, fast, simple, general applicability, and accommodating a variety of substitution patterns are the main advantages.

Acid Catalysed Condensation: These type of acid catalyzed reaction are followed in these reactions:-

Nalage et al., finds out an efficient method for the synthesis of 2-aryl benzothiazole by condensation of different types of aldehydes and 2-aminothiophenol. This reaction takes place in the presence of phosphorus pentoxide (P2O5) (act as an acid catalyst) in methanol for 3-5 hrs at room temperature 45.

Chandrachood et al. finds out an alternative method for the synthesis of 2-aryl substituted benzothiazole using cobalt nitrate (Co(NO3)2 6H2O)/Hydrogen peroxide (H2O2) as a catalyst. From this, they come to know the importance of temperature, change in reagent amount, change in solvent found the best outcome in Dimethyl-formamide (DMF) 46.

Moghaddam et al., finds out the most effective and rapid technique which also includes a high yield of the product by using condensation reaction of 2-aminothiophenol with various aldehydes in the presence of iodine as a catalyst. This reaction is a solvent-free reaction 47. Blacker et al., synthesize 2-(para-tolyl) benzothiazole by transition metal-Ir-catalysed hydrogen transfer reaction of 4-methyl benzaldehyde with 2-aminothiophenol 48.

Use of Hydrogen peroxide/Cerium ammonium nitrate (CAN) founds out to be the most novel and very efficient reagent for the synthesis of benzothiazole. This re4action was described by Bahrami 49 in which condensation of 2-aminothiophenol with variously substituted aryl aldehydes takes place. This process provides a very high yield product. 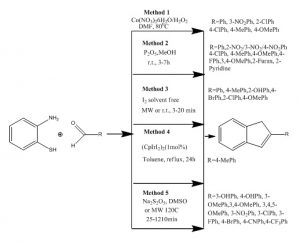 A one pot reaction by condensing aldehyde with 2-aminothiophenol or 2-aminophenol for the synthesis of 2-substituted benzothiazole and benzoxazole in the presence of diethyl bromo phosphonate and tert-butyl hypochlorite (t-BuOCl) in acetonitrile (MeCN). This reaction is given by Patil et al. 50

Solid Support Condensation: Maleki with his colleagues suggested an efficient method for the synthesis of 2-aryl benzothiazoles through condensation of various aldehydes and 2-aminothiophenol 51 by using improved catalyst sulphuric acid immobilized on silica gel (H2SO4.SiO2). The H2SO4.SiO2 used her is the inexpensive, heterogeneous and stable catalyst that has a very high reactivity as compare to unsupported H2SO4. The authors examined various catalysts with different solvents found out that 5 mg of H2SO4.SiO2 in ethanol is considerably the best.

A second method for the synthesis of benzothiazole derivative was reported by Shokrolahi et al., in which the condensation of 2-aminothiophenol with aldehyde using Sulfonated Porous Carbon (SPC) as a heterogeneous catalyst in water under microwave conditions 52.

Albeik et al., have suggested the synthesis of 2-substituted benzothiazole efficiently in good yield by the reaction between 2-aminothiophenol and various aldehydes by using perchloric acid doped polyaniline (HClO4/PANI) under refluxing ethanol as a catalyst 53. 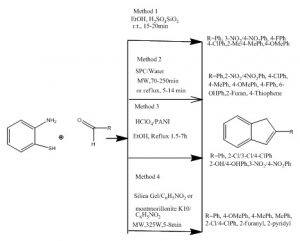 The synthesis of 4-fluoro-2-hydroxy-N(4,5,7-tri-fluorobenzothiazol-2-ylmethyl)-benzamide using N-cyanomethyl-4-fluoro-2-hydroxy-benzamide and 2-amino-4,5,7-triflourothiophenol hydrochloride in refluxing ethanol (EtOH) for 24 h was reported by Zandt with his colleagues 56.

Sun et al., reported the synthesis of 2-substituted benzothiazole via condensation of 2-amino-benzenethiols with a wide range of nitriles containing different functional groups by using copper acetate as a catalyst 57. 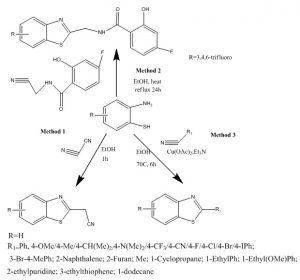 Condensation of 2-aminothiophenol with Ester: Khalil et al., have suggested that an amino ester and the selected 2-substituted aromatic amines such as 2-aminothiophenol was condensed to form 2-substituted benzothiazole. This reaction takes place in the presence of Poly Phosphoric Acid (PPA) at 160 ºC for 3 h followed by neutralization with aq ammonia 58. 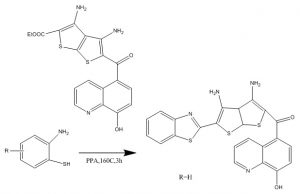 Manforni et al., have reported the synthesis of 5-substituted ethyl-2-(benzothiuazol-2-yl) acetate by condensing substituted 2-aminothiophenol and ethyl cyanoacetate at 120 ºC 59, which afforded a high yield of products.

Condensation of 2-aminothiophenol with Acid: Sharghi et al., have suggested an efficient, one-pot reaction which produces a high yielding synthesis of 2-substituted benzothiazoles from the 2-aminothiophenol and different aliphatic or aromatic carboxylic acids in the presence of methane sulfonic acid/silica gel (MeSO3H/SiO2) at 140 ºC for 2-12 h 60.

Another method for the synthesis of various 2-substituted benzothiazole from 2-aminothiophenols and corresponding carboxylic acid by refluxing in trimethylsilyl polyphosphate ester (PPSE) at various temperature and different time was reported by Yildiz et al. 61

Gupta and his colleagues designed a one-pot, solid phase, solvent-free microwave reaction which includes 2-aminothiophenol and various benzoic acid to synthesize various benzothiazole derivatives in a high yield in the presence of molecular iodine62. The advantage of this reaction is that it requires very less amount of iodine and is completed within 10 min. Another advantage is that it requires less cost as compare to PPA and [pmim] Br because no other solvent is required. Therefore it suggests that this reaction is inexpensive, solvent-free and very less time-consuming. 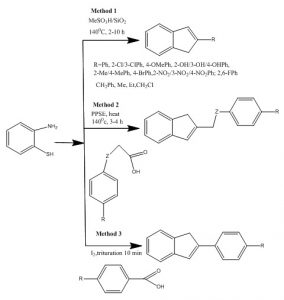 Condensation with Acyl Chloride: Nadaf and coworkers developed a novel technique in which they use 1-butylimidazolium tetra fluoroborate ([Hbim]BF4) and 1,3-di-nbutylimidazoliumtetra-fluoroborate ([bbim]BF4) ionic liquids (ILs) as reaction media for the synthesis of 2-aryl benzothiazoles by condensation of 2-aminothiophenol and substituted benzoyl chloride 63. A small change in the above reaction was done by Karlsson et al., in which condensation of 2-aminothiophenol with 4-nitrobenzoyl chloride takes place by applying N-methyl-2-pyrrolidone (NMP) as an oxidant 64. This reaction takes place at 100 ºC for 1 h to give 2-(4-nitrophenyl) benzothiazole. 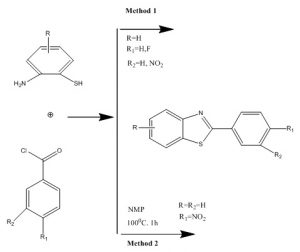 Kreysa and co-workers have synthesized a novel technique which includes the reaction between 2-aminobenzenethiol and benzyl methyl ketone to yield 2-methyl benzothiazole 67.

Cyclization Reactions: Rey and colleagues define cyclization of thioformanilides propelled by chloranil under irradiation in 1,2-Dichloroethane (DCE) and toluene at 80 ºC for the synthesis of 2-substituted benzothiazoles 68. Another method of cyclization given by Downer et al. includes the conversation of thiobenzamides to benzothiazoles through aryl radical cation as a reaction intermediate. This reaction includes phenyliodine (III)bis (trifluoroacetate) (PIFA) in trifluoroethanol or cerium ammonium nitrate (CAN) in aqueous acetonitrile which in turn increases the cyclization to complete within 30 min at room temperature 69. 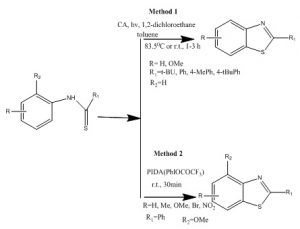 CONCLUSION: The present review article, therefore, highlights the use of benzothiazole derivatives and conclude that they have a marked biological activity. The biological properties of the nucleus include anticancer, anti-inflammatory, anti-diabetic, antiviral, antitubercular, antioxidant.

Hence, this unique molecule must serve as future therapeutic leads to developing various biological agents. It is anticipated that this study would give rise to the design of better molecules which can enhance biological properties and specificity.

ACKNOWLEDGEMENT: The authors are thankful to Dr. Ramesh Bodla, Mr. Ravikant and Ms. Shikha Thakur, Ms. Shruti and Mr. Ritesh for their motivational support and guidance.

CONFLICT OF INTEREST: Declared None