ABSTRACT: Patients with psychotic disorders often require long-term and intensive treatment. Several drug utilization studies have been carried out using WHO (World Health Organization) prescribing indicators, but these studies are deficient for psychiatry patients in India. To analyze antipsychotic prescriptions according to WHO core prescribing indicators and identify various techniques used for switching over from one antipsychotic to another, a cross-sectional, observational study was conducted with one year and six months duration. 128 patients were enrolled who fulfilled the inclusion criteria and gave written informed consent. This study revealed male (53.91%) predominance over female patients (46.09%). The average number of drugs prescribed per encounter was 4.56. The percentage of drugs prescribed by generic name was 48.79%, and 52.06% of drugs were prescribed from the essential drug list. Atypical antipsychotics (53.28%) were prescribed more than typical antipsychotics (46.71%). 56.25% of patients were treated with monotherapy, and 43.75% patients were treated with polytherapy. Switching over of antipsychotics was seen in 33 (25.78%) patients. The most commonly used technique for switching was immediate/abrupt switching (44.73%), followed by overlap switching (31.57%). This study concluded that polypharmacy needs to be carefully addressed, and practices like prescribing from essential medicines list and by generic name need to be encouraged.

INTRODUCTION: Psychosis is a symptom of mental illness and is characterized by a distorted sense of reality. It is the essential feature of schizophrenia spectrum disorders. The worldwide prevalence of Schizophrenia is 1% 1. Psychosis can lead to disability, and it is also a barrier to productivity. The contribution of mental disorders to the total disability-adjusted life years (DALYs) in India increased from 2·5% in 1990 to 4·7% in 2017 2.

In addition to environmental exposures, over 150 genes appear to contribute to schizophrenia risk that regulates neuronal migration, synaptogenesis, cellular adhesion and neurite outgrowth like neuregulin 1 1. Antipsychotics are the mainstay treatment of schizophrenia and other psychotic disorders. Antipsychotic agents may be classified as older drugs (conventional or “typical” anti-psychotics) and newer “atypicals”.

Patients with psychotic disorders often require long-term treatment and are vulnerable to the side effects such as extrapyramidal symptoms (EPS) and tardive dyskinesia (TD) with typical anti-psychotics and metabolic syndrome characterized by weight gain, hypertension, dyslipidemia and impairments in glycaemic control with atypical antipsychotics 3. Irrational use and polypharmacy of antipsychotics can lead to treatment failure, resistance and economic burden on patients and society.

WHO developed prescribing indicators intending to ascertain the therapeutic actions taken in similar institutions and determine the most frequently used medications in a given place 4. These indicators help to know polypharmacy, which is a major factor contributing to adverse drug reactions (ADRs) and drug-drug interactions (DDIs) 5.

The need to switch from one antipsychotic to another is a frequent challenge in the long-term management of psychotic disorders. Switching antipsychotics is frequently applied in clinical practice, but there are many open questions - Is the switch effective at all, for which drugs, and for how much time 6. So, the knowledge of strategies for selecting and switching the medications can help the patient attain optimal therapeutic outcomes.

Studies have shown that the majority of prescriptions in India are of drugs of “doubtful efficacy” 7. Studies related to prescription patterns in patients with schizophrenia have indicated a high rate of antipsychotic polypharmacy, but data in Asia are scarce. Studies on switching among antipsychotics in India are also limited in number. To promote the rational use of drugs in developing countries, assessment of prescription patterns with the WHO prescribing indicators is necessary.

Looking to the above needs and paucity of literature of research in the Indian population, the present study aimed to assess antipsychotic prescription patterns, techniques of switching over antipsychotics and recognize the most commonly used method of switching in patients with various psychotic disorders in the tertiary care hospital in Punjab, India.

Study Design: The study was designed as a hospital-based observational study cross-sectional in nature.

Study Duration: The study was conducted for a period of one and a half years.

Informed Consent: Patients and their attendants were made to understand the purpose of the study and their rights with the help of written informed consent prepared in Hindi, Punjabi, and English. Thumb impression was taken in the presence of the appropriate witness for illiterate patients. In case if special consent procedure was needed, then the person next to kin or legal signatory was enrolled to sign the informed consent form.

10.15% of patients had co-morbid diseases like hypertension and diabetes mellitus 2.

As described in Table 2, the average number of drugs per encounter was 4.56, the percentage of drugs prescribed by generic name was 48.79%, Only 5.4% antibiotics were prescribed, 83.59% prescriptions were with an injectable prescribed. Percentage of drugs prescribed from the essential drug list were 52.06%; injection/ Tablet Lorazepam was prescribed by generic name in most of prescriptions. Most commonly prescribed injectables were Injection lorazepam and Injection Haloperidol in IPD and Injection F-tensil (Fluphenazine) in OPD patients. Other Injectable prescribed were Inj. Diazepam. The most commonly prescribed medicine from the essential drug list was Injection haloperidol. Antibiotics used were Amoxycillin + clavulanic acid (1.56 %), Azithromycin (1.56%) followed by Cefaclor, Albendazole, and Ofloxacin + ornidazole 0.78 % each. 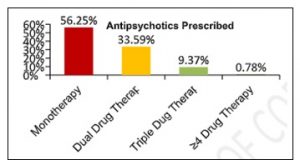 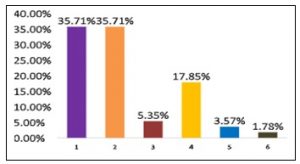 As shown in Fig. 3, other concomitant medications used were anxiolytics, in 96.87% patients, anti-cholinergics (60.15%), mood stabilizers (48.43%) and anti -depressants were used in 22.65% patients along with antipsychotics. Trihexyphenidyl was most commonly prescribed anticholinergic agent which was used in 56.25% patients. Lorazepam was most commonly prescribed anxiolytic (87.50%) followed by Clonazepam (34.38%), followed by propranolol (31.25%) and diazepam (18.75%). 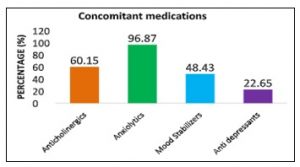 FIG. 3: OTHER CONCOMITANT MEDICATIONS PRESCRIBED ALONG WITH ANTIPSYCHOTICS IN STUDY POPULATION

Most commonly prescribed mood stabilizer was divalproate sodium (32.81%), followed by lithium (15.63%), lamotrigine (6.25%) and carbamazepine (4.69%). Most commonly prescribed Antidepressants were Dotheipin, Escitalopram and Fluoxetine (4.69% each), followed by Venlafaxine (3.91%), Duloxetine, Paroxetine and Sertraline were prescribed in 1.56% patients. Switching over of antipsychotics was seen in 33 (25.78%) patients out of 128. In 28 patients switching was done for one time and in 5 patients switching was done twice so the total number of switches was 38. 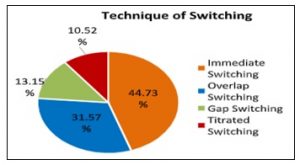 FIG. 4: DIFFERENT TECHNIQUES USED FOR SWITCHING OVER OF ANTIPSYCHOTICS IN STUDY POPULATION

TABLE 3: FREQUENCY OF SWITCHING BETWEEN CLASS OF ANTIPSYCHOTICS AND INDIVIDUAL AGENT

TABLE 4: COMPARISON OF DEMOGRAPHIC VARIABLES (AGE AND GENDER) AND TYPE OF SWITCHING OVER OF ANTIPSYCHOTICS IN STUDY POPULATION

Taking into account the demographic profile of study population and techniques used for switching over the difference among various types of switching over of antipsychotics was found to be statistically significant in age group 18 – 27 years (p value = 0.029) and in male patients (p-value = 0.026). In rest of age groups and in female patients the difference was statistically insignificant as shown in Table 4.

DISCUSSION: The predominance of male patients over female patients was comparable to the studies done by Abolmagd S et al., in which there were 53.8% male patients and 46.2% female patients and Nukala S et al., in which 59.61% were males and 40.39% females 8, 9. The mean age was 32.88 (12.91). This shows that psychotic disorders start early in life and hit the patients during the most productive years of their life. In the study population, taking into account the occupation of patients, it was found that the maximum number of patients (39.84%) were unemployed. A study was done by Evenson S et al., also showed that the employment rate for the schizophrenia population was consistently low 10.

Switching from one antipsychotic to another is frequently indicated due to inadequate treatment response or unacceptable adverse effects. It should be carried out cautiously and under close observation 24. Risperidone was switched a maximum number of times (12 times) followed by Olanzapine (10 times) and Aripiprazole (06 times). These results are similar to the study done by Kumar S et al., in which risperidone and olanzapine were maximally switched. This is probably due to the widespread use of these drugs 13. Overall most commonly used technique for switching was Immediate or Abrupt switching, which was used 18 times, followed by Overlap switching (11 times). This is contrary to the study done by Kumar S et al., in which Titrated switching was the most commonly used technique followed by Gap switching 13. It is quite possible that the choice of switching strategy can also be affected by the cause and urgency for switching an antipsychotic 25.

The major limitation of this study was the small sample size, and this was not a follow-up study, so efficacy and side effects of treatment were not properly assessed. Being this a follow-up study, there would be more scope of knowing the reason and duration of switching over antipsychotics.

CONCLUSION: From this study, an increasing trend of prescribing atypical antipsychotics was noted, risperidone being the most frequently prescribed drug followed by olanzapine. Many drugs were prescribed by brand name prescribed standards in prescription with generic names and prescriptions from the essential drug list have not been achieved in the study. During switching over of antipsychotics, the most commonly used technique was abrupt or immediate switching even when this technique is rarely recommended. Anticholinergic drugs were prescribed in high numbers even with atypical antipsychotics. Anticholinergics should be used judiciously and use of FDC risperidone and trihexyphenidyl should be reconsidered.

ACKNOWLEDGEMENT: We thank all the authors for their help at various levels in smooth conduction of this research work, data collection and preparation of manuscript.