Nanoemulsions are submicron sized emulsions that are under investigation as drug carriers for improving the delivery of therapeutic agents. These are the thermodynamically stable isotropic system in which two immiscible liquids are mixed to form a single phase by means of appropriate surfactant and cosurfactant. Nanoemulsion droplet sizes fall typically in the range of 20-200nm and shows narrow size distribution. In this review attention is focused  to give the brief regarding formulation aspect, method of preparation characterization techniques, evaluation parameters and various application of the nanoemulsions, several techniques are to be used for preparation of nanoemulsions like microfluidization, high pressure homogenization, low energy emulsification and solvent evaporation method and parameter that are to be used for its characterization like droplet size analysis ,viscosity determination, drug content, refractive index, pH, zeta potential, Transmission electron microscopy, thermal stability, release and  in vitro skin permeation study. These are applicable in drug targeting.

INTRODUCTION: Nanoemulsions can be defined as oil-in-water (o/w) emulsions with mean droplet diameters ranging from 50 to 1000 nm. Usually, the average droplet size is between 100 and 500 nm, terms sub-micron emulsion (SME) and mini-emulsion are used as synonyms. Since, the preparation of the first nanoemulsion in 1940s, it can be of three types such as oil-in-water (O/W), water-in-oil (W/O), and bi-continuous. The transformation between these three types can be achieved by varying the components of the emulsions.

Each type of the nanoemulsions serves as a template for preparing polymer latex particles, nanoporous polymeric solids etc. Apart from this, the nanoemulsions with pharmaceutically accepted ingredients are utilized in the development of drug formulations for oral drug delivery. The Nanoemulsions are also referred as miniemulsions, ultrafine emulsions and submicron emulsions.

Phase behavior studies have shown that the size of the droplets is governed by the surfactant phase structure (bicontinuous microemulsion or lamellar) at the inversion point induced by either temperature or composition. Studies on Nanoemulsion formation by the phase inversion temperature method have shown a relationship between minimum droplet size and complete solubilization of the oil in a microemulsion bicontinuous phase independently of whether the initial phase equilibrium is single or multiphase.

Due to their small droplet size, nanoemulsions possess stability against sedimentation or creaming with Ostwald ripening forming the main mechanism of Nanoemulsion breakdown. The main application of Nanoemulsions is the preparation of nanoparticles using a polymerizable monomer as the disperse phase (the so-called miniemulsion polymerization method) where Nanoemulsion droplets act as nanoreactors.

Another interesting application which is experiencing an active development is the use of Nanoemulsions as formulations, namely, for controlled drug delivery and targeting. The main application of nanoemulsions is the preparation of nanoparticles using a polymerizable monomer as the disperse phase where nanoemulsion droplets act as nanoreactors.

Formulation aspect of Nanoemulsion 2, 3, 4, 5: Formulation of nanoemulsion includes active drug, additives and emulsifier which are as shown in table 1.

Method of preparation of nanoemulsion: There are two primary methods to prepare a nanoemulsion 6:

(1) Phase Transition from Near-Optimum State via Change in Single Variable: This method involves change in one formulation variable such as salinity or temperature for a system near optimal (HLD (hydrophilic lipophilic deviation) near 0), such as applying a higher temperature to a microemulsion.

(2) Phase Transition from Near-Optimum State via Change in Multiple Variables: This method involves change in more than one formulation variable, such as applying higher temperature and inclusion of additional salt in a microemulsion.

(4) Phase Transition Stabilized by Liquid Crystal Formation: This method involves stabilization of nanodroplets by liquid crystal formation from a state near HLD=0.

It can be carried out by operating in particular areas of the phase diagram with a very low interfacial tension, which are areas of liquid crystals and microemulsions; at the end of the emulsification process, nanoemulsions formed. Properties of nanoemulsions, such as small droplet size, relative high kinetic stability and optical transparency seem to depend not only on composition variables but also on preparation variables such as emulsifying path, degree of mixing energy input and emulsification time.

Techniques of preparation of nanoemulsion: Nanoemulsions have very small particle size range; they can be most effectively produced using high-pressure equipment. The most commonly used methods for producing nanoemulsions are ‘High-pressure homogenization’ and ‘Microfluidization’ used at both laboratory and industrial scale.

Other methods like ‘Ultrasonification’ and ‘In-situ emulsification’ are also suitable for preparation of nanoemulsion. 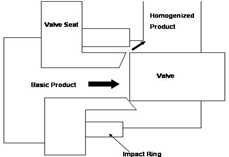 Nanoemulsion Droplet Size Analysis: Droplet size distribution is one of the important physicochemical characteristics of a nano-emulsion, was measured by a diffusion method using a light-scattering particle size analyzer Coulter LS-230. It measures the size distribution using the diffusion of laser light by particles. Polarization intensity differential scattering (PIDS) is the assembly consists of an incandescent light source and polarizing filters, a PIDS sample cell and an additional seven photodiode detectors. It is used to measure the droplets size distribution, like 0.5 ml emulsion was introduced in the measure compartment (125 ml of water). The results were presented as the volume distribution.

Many other techniques that have been developed to measure droplet size of nanoemulsions, two are of interest in this article in which laser light scattering (LLS) and energy filtering transmission electron microscopy (EFTEM). The small droplet size gives them inherent stability against creaming, sedimentation, flocculation and coalescence. It also allows the effective transport of active ingredients to the skin 9, 13, 14.

Polydispersity Index: The average diameters and polydispersity index of samples were measured by photon correlation spectroscopy. The measurements were performed at 25oC using a He-Ne laser.

Viscosity Determination:  The viscosity of the formulations was determined as such without dilution using a Brookfield DV III ultra V6.0 RV cone and plate rheometer using spindle 13, 14.

Refractive Index: The refractive index, n, of a medium is defined as the ration f the speed, c, of a wave such as light or sound in a reference medium to the phase speed, vp, of the wave in the medium.

pH: The apparent pH of the formulation was measured by pH meter 13, 14.

Transmission Electron Microscopy (TEM):  Morphology and structure of the nanoemulsion were studied using transmission electron microscopy. Combination of bright field imaging at increasing magnification and of diffraction modes was used to reveal the form and size of nanoemulsion droplets. Observations was performed as, a drop of the nanoemulsion was directly deposited on the holey film grid and observed after drying.

The formulations were placed in the donor chamber. At 2, 4, 6, 8 h, 0.5 ml of the solution in the receiver chamber was removed for GC analysis and replaced immediately with an equal volume of fresh solution 18. Each sample was performed three times. The cumulative corrections were made to obtain the total amounts of drugs permeated at each time interval .The cumulative amounts of drug permeated through rat skins were plotted as a function of time. The permeation rates of drug at a steady-state through rat skins were calculated from the slope of linear portion of the cumulative amount permeated through the rat skins per unit area versus time plot.

Three batches of formulations were kept at accelerated temperature of 30°C, 40°C, 50°C and 60°C at ambient humidity. The samples were withdrawn at regular intervals of 0, 1, 2 and 3 months and were analyzed for drug content by stability-indicating HPLC method.

Table 2 provides a thorough review on the advancement on nanoemulsion.

CONCLUSION: Nanoemulsion formulations offer several advantages for the delivery of drugs, biologicals, or diagnostic agents and able to protect labile drug, control drug release, increase drug solubility, increase bioavailability and reduce patient variability. Traditionally, Nanoemulsions have been used in clinics for more than four decades as total parenteral nutrition fluids. Nanoemulsions are chiefly seen as vehicles for administering aqueous insoluble drugs, they have more recently received increasing attention as colloidal carriers for targeted delivery of various anticancer drugs, photosensitizers, neutron capture therapy agents, or diagnostic agents. Because of their submicron size, they can be easily targeted to the tumor area.

Moreover, targeting moiety has opened new avenues for targeted delivery of drugs, genes, photosensitizers, and other molecules to the tumor area. It is expected that further research and development work will be carried out in the near future for clinical realization of these targeted delivery vehicles.

ACKNOWLEDGEMENT: Authors wish to acknowledge Mr. B. S. Jhankar and all those who are involved directly or indirectly for compilation of this article.