ABSTRACT: Nifedipine has poor dissolution characteristics due to its poor wetability and dispersibility in body fluits,  floating mucoadhesieve system in a Simplex Lattice Design were combined in an attempt to prolong its gastric residence time. This research was aimed to find an optimum formula, through finding effects of adding polymers (Carbopol 934P, gelatin) concentration and optimum gas generating, to be combined with its Nifedipine spray-dry release with PVP K-30. Nifedifine was produced by a spray-dried method with the 30% drugloads using PVP K-30. All performed dispersions were characterized by using Scanning Electron Microscopy (SEM), X-ray Powder Difractometry (XRPD), Differential Scanning Calorimetry (DSC) and in-vitro drug release. The 5% and 15% concentration of Carbopol 934P, gelatin, and (citric acid:Na2CO3) were used. Based on the Design Expert Optimation program, the optimum formula of Nifedipine tablets was obtained that it consisted of 12.02% Carbopol 934P, 5% gelatin, and 7.98% gas generating which resulting the physical characteristics of 3.00% moisture content, 10.51 g/sec  flow-rate, 4.51 kg/cm2 hardness, 0.48% fragility, 58.10% DE, 100.20 sec Floating Lag Time (FLT), and 0.1011 N mucoadhesieve power.

INTRODUCTION: Nifedipine is a calcium channel blocker, which belongs to dihydropyridine derivates. It exhibits poor dissolution characteristics due to its poor wet ability and dispersibility in body fluids. Therefore, a number of attempts, such as decreasing particle size, the use of wetting agents, co-precipitation, and preparation of solid dispersion, have been made to modify the dissolution characteristics to improve the absorption rate 1.  Amorphous solid dispersions can be used to improve dissolution rate of poorly soluble drugs.

This product consisting of a hydrophilic carrier which the drug is dispersed molecularly or as very small particles 2, 3.

In a previous study, a fully amorphous solid dispersion using PVP K-30 was prepared as hydrophiliccarriers for Nifedipine. Spray dried and melted fusion methods are commonly used to evaporate a solvent 4.

There are many methods for make sustained release dosage form. One of them is Gastroretentive Drug Delivery System (GRDDS) which keep this dosage form survive at the gastro fluids. GRDDS used to control drug delivery, especially for drugs which has narrow therapeutic window and good absorption in gastro membrane. Things would increase gastro lag time include bioadhesive (attached in the membrane’s surface),  increase the size of molecule drugs to prevent drugs accross pylorus membrane, and density control which known as floating system 6.

Floating mucoadhesieve drug delivery system is defined as method for drug delivery which has low density, floating and attaching capability in the gastro membrane for a long time. This combination consist of effervescent components (sodium bicarbonate and citric acid) and polymers (Carbopol 934P and gelatin) that can extend lag time of Nifedipine tablets in the gastro membrane. Based on these descriptions, obtainining an optimum formula out of the physical characteristics and dissolution profile of floating mucoadhesieve Nifedipine tablets, the Simplex Lattice Design can be used 7. 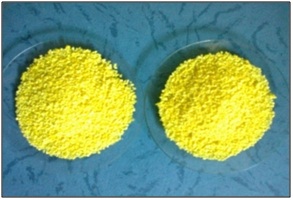 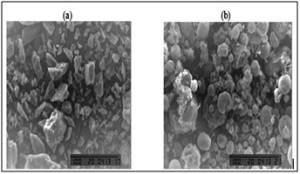 although this interaction do not destroy the structure of pure Nifedipine (Fig. 4). 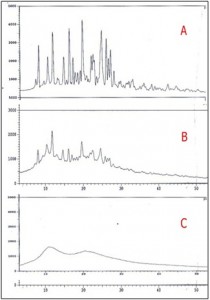 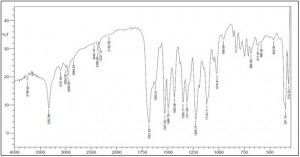 DSC test were subjected to examine the form of solid dispersion molecules. Each sample which is pure Nifedipine, solid dispersion, and physical mixture were evaluated by DSC. Nifedipine melting point was 174.94°C and Tgs of PVP K-30 was 173°C. While increasing the concentration of Nifedipine in PVP K-30 result decreasing  Tg  (133.04°C). This studies conclude that Nifedipine solid dispersion has amorphous form.

Nifedipine SD can improve dissolution better than physical mixture and its pure form, which described in Table 3

Table 4. indicated that the more concentration of gas generating and Carbopol 934P result the more moisture content there form because of their high hygroscopics. All formula fulfill the specification of granules moisture content which average of 2-4% 7. 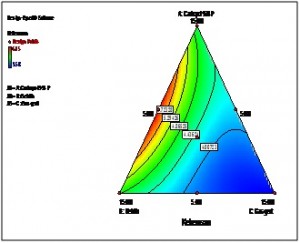 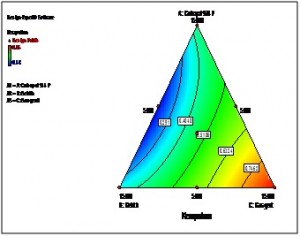 Assay of Nifedipine in floating mucoadhesieve tablets using spectrophotometry UV at 238 nm. Standar curve equation was obtained y = 0,0594x – 0,0002 (r = 0,9999). This studies resulted that all formula fulfill the specification of Nifedipine which described in Table 6.

FLT was used to examine the floating time for each tablets formula in HCl pH 1,2 medium test. Table 7. showed that three components (gelatin, Carbopol 934P, and gas generating) be able to improve FLT with coefficient rate of 332.79, 232.14, and 124.20, respectively. There are no similar data for each formula because of the different component’s concentration. Formula IV, V, and VI fullfill the requirements which less than 2 minutes. 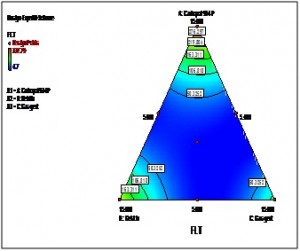 Based on equation (Table 6.) concluded that each components would able to increase the bioadhesieve power of Nifedipine tablets with coefficient rate of 0.14, 0.10, and 0.026, respectively. Interaction between two components (gelatin dan Carbopol 934P) also give positive alteration by coefficient rate of 0, 36. Carbopol 934P significantly improving bioadhesieve power but reduce the release of Nifedipine 9. 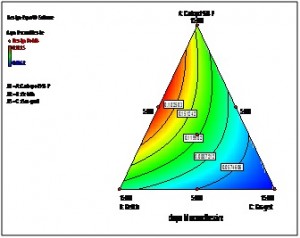 Determination of The Optimum Formula:

The optimum formula was obtained from superimposed contour plot which is collected from the contour plot. Fig.  9  discovered that yellow area explain the prediction of optimum formula floating mucoadhesieve Nifedipine tablets. Based on Design Expert has been choosen one point which described the optimum formula consisting of 12,02%, Carbopol 934P, 5% Gelatin, and 7.98% gas generating with their result prediction are flow rate 10,70 g/sec, hardness 4,56 kg/cm2, friability 0.50%, Floating Lag Time (FLT) 100.23 sec, mucoadhesieve power 0.1011 N, and dissolution (C360) 57,07%. 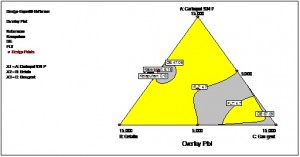 Table 7. showed that T-test between Design Expert and trial result has p > 0.05 which indicated that the procedure optimization is valid.

ACKNOWLEDGEMENTS: The authors thank to Technology Pharmacy Research Laboratory, Faculty of Pharmacy, Gadjah Mada University, Yogyakarta, for providing all the facilities to carry out this work.