A LIQUID CHROMATOGRAPHY METHOD FOR THE DETERMINATION OF CURCUMIN IN PGPR INOCULATED CURCUMA LONGA. L PLANT

A LIQUID CHROMATOGRAPHY METHOD FOR THE DETERMINATION OF CURCUMIN IN PGPR INOCULATED CURCUMA LONGA. L PLANT

A rapid and simple HPLC method has been developed for the quantification of curcumin in PGPR inoculated curcuma longa plant. Treatment of PGPR such as Pseudomonas fluorescens and Bacillus megaterium improved the content of curcumin in rhizomes sample. The PGPR treated rhizomes were higher in curcumin content than the PGPR untreated plant rhizomes sample. Analysis was performed using a C18 column (250 X 4.6 mm) by isocratic elution with 50mM potassium dihydrogen orthophosphate (pH 3.5): Acetonitrile (40:60) and detection at 420 nm and 340 nm using a photodiode array detector for curcumin respectively. The calibration plot was linear over the range studied (Curcumin: 100 – 3200ng/mL) with a correlation of 0.999. The method was also validated for the precision and recovery. Thus, the method is suitable for routine analysis of curcumin in PGPR inoculated curcuma longa plant sample 1, compared with PGPR uninoculated plant sample 2.

INTRODUCTION: The rhizomes of Curcuma longa Linn., (Turmeric) are widely used as natural coloring agents in many food products. The major coloring substances in turmeric are curcumin (1, 7 bis(4-hydroxy-3-  methoxyphenyl)-1, 6-heptadiene-3, 5 dione) and two demethoxy compounds. The compound is reported to have antispasmodic, anticoagulant and antitumor activities 1. This alkaloid is also reported to possess several pharmacological actions and in addition enhance the bioavailability of several drugs 2.

Curcumin is widely used as spices in cooking and as coloring agents for foods such as mustards and pickles. Curcumin has the high market value and has a consistent demand in the field of medicine. Curcumin, a bioactive component of turmeric is responsible for the wide spectrum of medicinal properties and have commercial application. The microbial inoculants such as Pseudomonas fluorescens, Azospirillum lipoferum and Bacillus megaterium suitable combination successfully increase the curcumin yield and quality of turmeric 3.

Detailed survey of literature for curcumin revealed several methods based on different techniques viz: HPLC 4, 5 in plasma and urine, HPTLC 6 and UV fluorescence detection 7. However no methods were reported for determination of curcumin content in bioinoculated curcuma longa rhizomes sample. The purpose of the present study was to evaluate curcumin by an isocratic HPLC method.

Chemicals: All the solvents were of analytical grade purchased from SRL laboratories (India). Water purified by the milli Qwater purification was used. The standards curcumin was purchased from Sigma Aldrich (India).

Experimental setup: The experiments were carried out at the Annamalainagar, Annamalai University, Chidambaram, Tamil Nadu, India. The pot culture plants were maintained in complete randomized block design (CRBD). In every treatment the talc-based formulation of Pseudomonas fluorescens (PF25) and Bacillus megaterium (BM29) were applied as a seed treatment (ST) (12 g/kg of rhizome seed), Plants were watered as and whenever necessary throughout the experimental duration. Single and Combination of Biofertilizers introduced was follows:

Sample collection: Rhizome samples were collected from turmeric plantations at the harvesting period.

Sample preparation: The components curcumin from PGPR inoculated and uninoculated rhizomes were extracted in methanol. Curcumin constituents were extracted from 0.2 g of powder by adding 10 mL of methanol and sonication for 15 min (Bandelin Electronics, Berlin). The solution was then filtered using a Whatmann filter paper No 4. A 1mL aliquot of the methanol extract was evaporated to dryness and reconstituted with 10mL of mobile phase.

Calibration curve: Standard solutions of 100- 3200 ng/mL of curcumin were analyzed to check the linearity of response.

Specificity: The specificity of the method was ascertained by analyzing the standards and the samples. The peaks of curcumin in sample were confirmed by comparing the retention time and spectra of the standards.

RESULTS AND DISCUSSION: Optimization of the method was carried out using various concentrations of acetonitrile while keeping the pH of the aqueous phase constant. A solvent combination of 50mM potassium dihydrogen orthophosphate: acetonitrile (40:60 v/v) gave a satisfactory separation of the compounds of interest. This optimized mobile phase separated curcumin at 8.8 min respectively. Increasing the concentration of organic phase in the solvent system resulted in faster elution but loss of resolution. On the other hand increasing the aqueous phase concentration caused peak broadening and increase in retention time. The calibration curves of curcumin were linear in the range of 100 – 3200 ng/mL. Linear regression equation and correlation coefficient are shown in Table 4.

Detection limits and quantitation limits of curcumin was found to be 10 ng whereas quantification limits were 30 ng. The column efficiency, resolution and peak asymmetry were calculated for the standard solutions and are presented in Table 4. The values obtained demonstrated the suitability of the system for the analysis of curcumin PGPR inoculated pant samples. The PGPR inoculated samples examined was found to contain curcumin in the range of 325-1185ng/gm.

Rapid method has been developed and validated for estimation of curcumin from PGPR inoculated curcuma longa plant rhizomes sample. 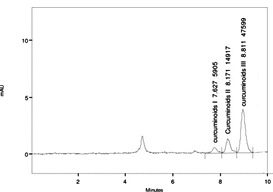 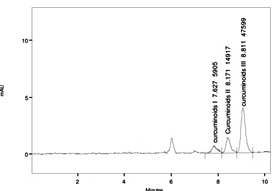 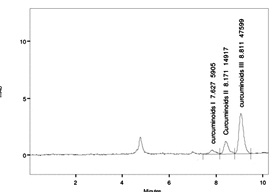 How to cite this article:Boominathan U and Sivakumaar PK: A Liquid Chromatography Method for the determination of Curcumin in PGPR inoculated Curcuma longa L. plant. Int J Pharm Sci Res. 3(11); 4438-4441.