ABSTRACT: Context: Endolichenic fungi are the microorganisms living inside the thalli of the lichen and found to be a new source of bioactive secondary metabolites. This is an underutilized source of bioactive compounds and has not been studied extensively. Genus, Parmotrema is one of the foliose lichens with largely rounded lobes and occurs on rocks of rain forests, sub-montane and montane forests in Sri Lanka. Aims: The endolichenic fungi available in Sri Lanka and the chemistry of their secondary metabolites have not been explored thoroughly. This study aims at exploring novel bioactive compounds available in Penicillium citrinum inhabiting Parmotrema sp. Methods and Material: The lichen, Parmotrema sp., was collected from Hakgala Botanical Garden in Sri Lanka and its fungal strains were isolated and identified by Genomic DNA sequencing. Compounds were first extracted to ethyl acetate and subsequently subjected to bioassay-guided fractionation to isolate the bioactive compounds. The DPPH assay was used to determine the antioxidant activity. The active compound/s was separated by column chromatography, and its structure was elucidated by IR, 1D and 2D-NMR, 13C-NMR and MS. Statistical Analysis Used: The IC50 of the crude extract was calculated using Probit analysis (MINITAB® Release 14.1. Minitab Inc. 2003 Statistical Software). Results: A bioactive compound, named PP-PC-03 together with PP-PC-01 and PP-PC-02 was isolated from P. citrinum. All three compounds showed antioxidant activity in the DPPH assay with IC50 values 159.6 ± 22.3, 120.1 ± 11.7 and 68.6 ± 4.3 µg/mL respectively. Conclusion: Based on spectral analysis the structure of PP-PC-03was determined as 10-Ethylidene-2,4,9-trimethoxy-10,10a-dihydro-7,11-dioxa-benzo[b] heptalene-6,12-dione and identified as a new compound. Comparatively PP-PC-02 and PP-PC-03 had moderate antioxidant activities while PP-PC-01 showed strong radical scavenging activity.

INTRODUCTION: Endolichenic fungi are microorganisms living in the thalli of lichens that are analogous to the plant endophytic species inhabiting the intercellular spaces of the hosts without causing deceptive damage to their hosts 1.

Recent studies have demonstrated that endolichenic fungi can produce structurally diverse bioactive small molecules. The first report of isolation and identification of secondary metabolites from an endolichenic fungus was published by Paranagama, et al., 2007 1. In that study isolation of two new heptaketides, corynesporol and 1-hydroxydehydro-herbarin along with herbarin have been reported. All compounds were evaluated for their cytotoxicity and ability to inhibit migration of human metastatic breast and prostate cancer cell lines MDA-MB-231 and PC-3M, respectively. Dehydroherbarin inhibited migration of both cell lines at concentrations not toxic to these cell lines 1. In our continuing search for novel bioactive secondary metabolites from endolichenic fungi inhabit in lichens found in Sri Lanka, we have been particularly interested in the identification of compounds with antioxidant and anticancer activities. Recent reports indicated the isolation of anticancer and antioxidant polyketides from two endolichenic fungi, Curvularia trifolii and Penicillium citrinum 4, 5.

In the present study, we focused on the endolichenic fungus, P. citrinum, inhabit in the lichen, Parmotrema sp. collected from Hakgala montane forest in Sri Lanka. It is reported that P. citrinum obtained from different sources have produced bioactive secondary metabolites with diverse chemical structures. Isolation of citrinin, phenol A acid, dihydrocitrinone and dihydrocitrinin, together with a cytotoxic dimer, dicitrinin A had been reported from solid phase fermentation of an Australian P. citrinum 6. A thorough literature survey on bioactive secondary metabolites in endolichenic fungi from different geographical locations revealed that isolation of bioactive secondary metabolites in P. citrinum had not been studied extensively except for the recent reports published by Samanthi et al. (2015a) 4. In our recent study, bioassay-guided fractionation of ethyl acetate extract of P. citrinum isolated from the lichen, Parmotrema sp. led to the isolation of two bioactive polyketides 4. The present study is a continuation of exploring more bioactive compounds available in P. citrinum.

SUBJECTS AND METHODS: IR spectra for KBr disks were recorded on a Shimadzu FTIR-8300 spectrometer. NMR spectra were recorded in CDCl3 with a Bruker DRX-400 instrument at 400 MHz for 1H NMR and 100 MHz for 13C NMR, using residual CHCl3 as an internal standard. The chemical shift values (δ) are given in parts per million (ppm), and the coupling constants are in Hz. Mass spectrum was recorded on a Shimadzu LCMS-8000 QPR and a JEOL HX110A mass spectrometer. Column chromatography was performed using Merck Kieselgel (230-400 mesh) or Sephadex LH 20. Analytical and preparative thin layer chromatography (TLC) was performed on pre-coated 0.25 mm thick plates of silica gel 60 F254.

Isolation and Identification of Fungal Strain: The lichen host, Parmotrema sp. was collected from Hakgala Botanical Garden situated in Nuwara Eliya District, Sri Lanka. Fungal isolations were carried out according to the surface sterilization method described by Samanthi et al. (2015a) 4. The fungi grown on PDA were deposited in 10% glycerol in H2O at -80 ºC at the Department of Chemistry, University of Kelaniya, Sri Lanka under the accession number US/PA/06. Molecular identification of the pure isolated strains of the endolichenic fungi was carried out using a molecular biological protocol by genomic DNA extraction, amplification and sequencing. Promega Wizard® Genomic DNA Purification Kit was used for the extraction of fungal DNA 4.

Preparation of EtOAc Extract of P. citrinum and its Antioxidant Activity: A seed culture of P. citrinum grown on PDA for two weeks was used for inoculation. Large-Scale culture of P. citrinum was inoculated into 56 large PDA plates and incubated for 14 days at room temperature. The crude extract was extracted using EtOAc, and the antioxidant assay was carried out in a flat bottom 96-well microtiter plate, according to the method described by Chatatikun et al. (2013) 5 with slight modifications. The inhibition rate was calculated and plotted against the test concentrations to obtain the IC50 value. The IC50 of the crude extract was calculated using Probit analysis (MINITAB® Release 14.1. Minitab Inc. 2003 Statistical Software).

Isolation of Bioactive Compounds in the EtOAc Extract: A portion (3.6 g) of the crude extract was partitioned with hexane, CHCl3, and 80% methanol in water as described by Parangama et al. (2007a) 1. The antioxidant activity of each fraction was evaluated using the methods described above.

Bioassay Directed Fractionation of the CHCl3 Fraction: A portion (2.8 g) of the CHCl3 fraction was subjected to column chromatography on silica gel, and the column was eluted with CH2Cl2 followed by increasing amounts of MeOH in CH2Cl2. These fractions were combined by their TLC profiles. The seven fractions were analyzed using normal phase silica TLC plate using 1% MeOH in CH2Cl2 solvent system.

Purification of Antioxidant Active Fraction Using  Sephadex LH-20 Column: A portion of the bioactive fraction (110.0 mg) was further fractionated by gel permeation chromatography over a column of Sephadex LH-20 made up in hexane and eluted with hexane containing increasing amounts of CH2Cl2, followed by CH2Cl2 containing increasing amounts of MeOH, and finally 100% MeOH. Twenty-two fractions (10 mL each) were collected and combined by their TLC profiles to obtain two fractions. Purification of one of the fractions led to the isolation of two bioactive compounds, PP-PC-01 and PP-PC-02 4 and the other fraction was further purified using silica gel column chromatography.

Isolation of PP-PC-03: A portion of the fraction (475.0 mg) was subjected to column chromatography on silica gel and eluted with CH2Cl2 followed by increasing amounts of MeOH in CH2Cl2. Six fractions were obtained, and the DPPH assay was carried out to evaluate the antioxidant activity of each fraction. The antioxidant active fraction was purified using preparative TLC with the solvent system of CH2Cl2: EtOAc (9: 1) to obtain the pure compound PP-PC-03.

Fractionation of the EtOAc Extract and their Antioxidant Activities: ITS sequence of the endolichenic fungi isolated from the lichen, Parmotrema sp. matches with P. citrinum sequences from Gene-Bank with a sequence identity of 99%. Therefore this endolichenic fungus was identified as P. citrinum 4. Antioxidant activity of the EtOAc extract and subsequent fractions was determined by DPPH assay and compared with BHT. The results are presented in Fig. 1 and 2 4. 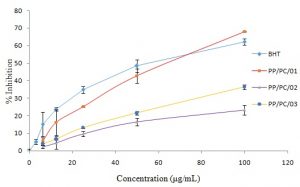 FIG. 4: THE DPPH RADICAL SCAVENGING ACTIVITY OF THE PURE COMPOUNDS (PP-PC-01, PP-PC-02, AND PP-PC-03) ISOLATED FROM THE CHLOROFORM EXTRACT OF P. CITRINUM COMPARED WITH THE POSITIVE CONTROL, BHT. EACH VALUE IS EXPRESSED AS MEAN ±SD (n=3)

Structure Elucidation of PP-PC-03: Structure of PP-PC-03 was fully established by a combination of FABMS and NMR spectroscopy. 1H NMR and 13C NMR data with selected HMBC correlations observed are given in Table 1. Fig. 5 and 6 show the UV-Vis and IR data of PP-PC-03 respectively.

DISCUSSION: Since, the EtOAc extract of P. citrinum showed antioxidant properties Fig. 1, it was partitioned with hexane, CHCl3 and 80% aqueous MeOH to obtain three fractions and the antioxidant assay revealed that the CHCl3 fraction has the highest activity out of three fractions Fig. 2.

By a combination of FABMS and NMR spectroscopy, the molecular formula of PP-PC-03 was determined to be C19H18O7 and indicated 11 degrees of unsaturation. UV absorption maxima at 274, 359, 372 and 375 nm Fig. 5 were indicative of a conjugated chromophore and its IR spectrum Fig. 6 with absorption bands at 1768, 1647, and 1502 cm-1, PP-PC-03 suggested the presence of a, b-unsaturated lactone carbonyl and olefinic groups. 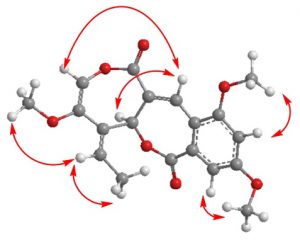 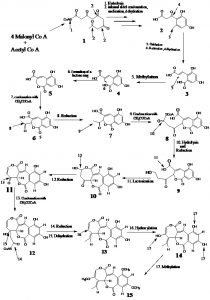 Postulated Biosynthetic Pathways of PP-PC-03: The compound, PP-PC-03 likely to have the same biogenetic origin as the two previously identified polyketides, PP-PC-01 and PP-PC-02, via the polyketide pathway and is biosynthesized from acetyl coenzyme A 4. A plausible biosynthetic pathway for this polyketide, PP-PC-03 is proposed in Scheme 1. Formation of the aromatic ring in 2 of Scheme 1 is proposed due to condensation of tetraketide in 1 of Scheme 1. Oxidation of methyl group in 2 produced a carboxylate group in 3, which undergoes methylation and lactonization to yield 4 and 5 respectively. Formation of the second lactone ring is postulated from condensation with acetyl CoA to form 6 and reduction and condensation with a second acetyl CoA molecule to yield 8, which undergoes hydrolysis followed by reduction and lactonization to form 9 and 10. Subsequently, 10 undergoes reduction to form 11, and it condenses with an acetyl CoA to produce 12. After undergoing reduction, dehydration, and hydroxylation 13 changes to 14 which is methylated to yield 15 (PP-PC-03).

CONFLICT OF INTEREST: No conflicting interest.