ABSTRACT: Microsponge is recent novel technique for control release as well as target specific drug delivery system. Therefore many researchers are attracted towards the microsponge drug delivery system. Microsponge technology has been introduced in topical drug products to increase the controlled release of active drug into the skin in order to reduce entry of drug in blood and maintain drug on skin surface. Microsponge technology offers entrapment of ingredients, improved stability, reduced side effects, increased elegance, and enhanced formulation flexibility. Various studies have shown result that microsponge systems are non-irritating, non-allergenic, nonmutagenic, and non-toxic. This technology is used currently in cosmetics, over-the-counter (OTC) skin care, sunscreens and prescription products. This technology has the best feature that it is self-sterilizing. In this article we focused on method of preparation, characterization (Particle size and its distribution, surface morphology, porosity, density are covered), advantages, disadvantages and application of microsponge

INTRODUCTION: 1-5 Transdermal drug delivery system supplies the drug to systemic circulation with the help of number of penetration enhancers. The target of TDDS is to provide maximum amount of drug in blood circulation by crossing skin layers. Sometimes there is needed to keep drug in skin layers for local effect without entering in systemic circulation is a challenging task. To achieve this goal carrier and microparticle technology is required, by using these technology one can maintain drug in skin only. Generally ointments, creams, and pastes are the formulations applied to the skin for its local action

These formulations give many disadvantages such as greasiness, stickiness, and requires high amount of drug in formulation, also evaporation of many drugs takes place. These formulations also give particular odors and sometimes allergy with skin. So to avoid such a drawbacks we have to make such formulation which can give more drug release on skin surface without entering in blood stream by using new technology.

The microsponge technology was developed by Won in 1987 and the original patents were assigned to ad-vanced polymer system. Microsponges are spherical shape particles having pores and myriad of interconnected voids of particle size range of 5-300μm. They are tiny sponge like particles; (As shown in Fig.1) these microsponges have capacity to entrap wide range of active ingredients such as emollients, fragrances, essential oils, sunscreens, and anti-infective and are used as a topical carrier system. Further these porous microspheres with active ingredients can be incorporated into formulations such as  creams, lotions and powders.4 Various techniques have been developed for systemic delivery of drugs below the heading of Transdermal delivery system (TDS) using the skin as portal of entry. It has improved the efficacy and safety of many drugs that may be better administered through skin. But TDS is not practically useful for those drugs whose target is only a skin and blood. 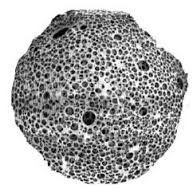 Requirement of material to be formulated in to a Microsponge:

Method of Preparation of Microsponges:

In this method two phases are mixed one phase contains active ingredient and monomer are mixed together to form a solution (which is non polar). This phase is suspended in second phase containing additives like surfactant or dispersing agents. Once the suspension is obtained with desired particle size polymerization is done by activating monomer either by increased temperature, irradiation or catalysis. (As shown in Fig.2) 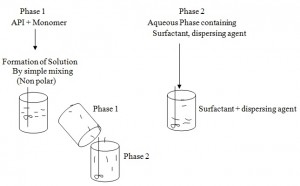 FIG.2: FORMATION OF SUSPENSION FOR PREPARATION OF LIQ-LIQ SUSPENSION POLYMERIZATION.

In this method there is a formation of two different phases one is internal and second is external phase like an emulsion. Internal phase consist of solution of drug and polymer made with volatile solvents like ethanol, acetone, dichloromethane. This phase is added in second phase i.e. external phase which consist of aqueous polyvinyl alcohol with vigorous stirring. Also triethylcitrate is added in concentration of 20 % to facilitate plasticity. (As shown in Fig.3) 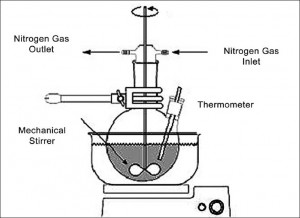 If the active is very soluble in the particular vehicle during compounding of the finished products, the products will not provide the desired benefits of gradual release. Instead they will behave as if the active was added to the vehicle in a free form. Therefore, while formulating microsponge entrapments, it is important to design a vehicle that has minimum solubilizing power for the actives. This principle is vice varsa to the conventional formulation principles usually applied to topical products. For these conventional systems it is generally recommended to maximize the solubility of the active in the vehicle.

Particle size analysis of loaded and unloaded microsponges can be performed by laser light diffractometry or any other suitable method. The values can be expressed for all formulations, size range. Cumulative percentage drug release from microsponges of different particle size will be plotted against time to study effect of particle size on drug release. Particles larger than XY µm can impart gritty feeling and hence particles of sizes between PQ and 25µm are preferred to use in final topical formulation

Microsponge delivery systems are used to improve the safety, effectiveness and quality of topical prescription, over-the-counter and personal care products. Microsponges can be used in variety of applications. It is used mainly for topical and now a days for oral administration. It can be used as an excipient due to its high loading capacity and sustained release ability. It offers the manufacturer a range of alternatives to develop drug and cosmetic products. Microsponges are designed to deliver a pharmaceutical active ingredient efficiently at the minimum dose and they also enhance stability, reduce side effects and modify drug release. Over-the-counter products that incorporate microsponge drug delivery system include numerous moisturizers, specialized rejuvenated products, and sunscreens.

CONCLUSION: There is a very high demand in international market for new and very efficient Pharmaceutical and Cosmetic products. The market requires potential and versatility for Microsponge technology. During formulation consideration formulator can realize the full capabilities of these unique materials which provides improved stability, enhanced safety, reduction in side effects from API, enhanced multifunctionality and improved ingredient compatibility. Microsponge delivery system is a challenging for a new generation of Pharmaceutical and Cosmetic industry.