ABSTRACT:A simple, sensitive, rapid, accurate and economical polarimeteric method has been developed and subsequently validated for simultaneous determination of Sucrose - in Iron Sucrose Raw material, Iron Sucrose Injection and Inprocess Bulk sample of Iron Sucrose formulations in pharmaceuticals. The usual measure of purity of sucrose is by polarimetry - the measurement of the rotation of plane-polarized light by a solution of sucrose. The specific rotation at 20°C using yellow "sodium-D" light (589 nm) is +66.47°. Commercial samples of sucrose are assayed using this parameter. Readings are not affected by the molecular weight of the Iron Sucrose, the entire procedure takes much less time to perform. The developed method was compared with RP-HPLC method. The described method was linear over a concentration range of 10-70 mg per ml for the assay of Sucrose. Results of analysis were validated statistically and by recovery studies. The limit of detection (LOD) and the limit of quantification (LOQ) for Sucrose were found to be 0.076 and 0.231mg per ml. The results of the study showed that the proposed polarimeteric method is simple, rapid, precise, accurate and economical (as compared to conventional RP-HPLC methods) which is useful for the routine determination of Sucrose. 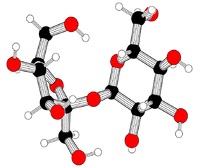 Iron Sucrose has been used for iron replacement therapy because of its lower rate of adverse events and Sucrose has been used as sweetening agent, it is best known for its nutritional role. Sucrose is registered as official additive and excipient in Indian pharmacopeia 1, British Pharmacopeia 2 and United States Pharmacopeia 3. Literature surveys reveal Spectrophotometric methods 4, 5, HPLC methods 6, 7 and LCMS method 8 for its determination.

Chemicals, reagents and Instrumental Conditions: Standard bulk drug sample Sucrose and Iron Sucrose were provided by Nirlife Healthcare (Healthcare Division of Nirma), Ahmedabad, Gujarat, India. Iron Sucrose Injection and its Inprocess Bulk Formulations were procured from the production department of Nirlife Healthcare. All other reagents (Finar Reagent, Ahmedabad, India) used were of HPLC grade or AR grade. Whatman filter paper no. 41 (Whatman International Ltd, England) were used in the study. Sucrose solution is measured on AUTOPOL V (Rudolph) Polarimeter- the measurement of the rotation of plane-polarized light by a solution of sucrose. The specific rotation at 20 °C using yellow "sodium-D" light (589 nm) is +66.47°.

Statistics of Polarimeter:  AUTOPOL V Polarimeter calculates the mean, the standard deviation and records the minimum and maximum readings for up to 999 measurements. Measured data for statistical calculation can be printed in either of two ways: automatically, at predetermined time intervals, or manually, by pressing the print key. Statistics for a batch of samples can be printed by pressing the page feed key. Statistics on time varying optically active samples can be compiled by measuring a sample at a predetermined rate and for a predetermined number of measurements (figure 3). 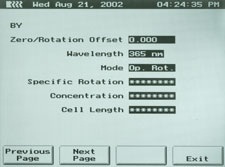 Sample Specific Programs of Polarimeter:  In factory or laboratory environments where the same types of samples are repeatedly measured, sample specific programs can be generated. These programs allow parameters such as tube length, concentration, specific rotation, wavelength, measurement mode, and temperature control and correction to be specified.

The programs can be labeled with alpha-numeric names. The factory or laboratory operator simply selects the sample program from the sample program menu and the AUTOPOL V Polarimeter is properly configured to make measurements of the user's samples. Sample range limits can also be specified in sample specific programs, (e.g. 24.8° Arc - 25.7° Arc). When a range is specified and the measurement falls outside this specification the display will read "out of range". Two TTL level signals are available for out of range conditions. These signals are useful for process control or alarms.

Methodology (Analysis of Formulation): Transfer a volume or accurately weighed sample of Iron Sucrose raw material, Iron Sucrose injection, Iron Sucrose inprocess bulk sample equivalent to 2.5 grams of Sucrose, in to a 50-ml volumetric flask, add 1.25 ml of water, and mix. Add 1.25 ml of a monobasic sodium phosphate solution [(sodium dihydrogen phosphate monohydrate; NaH2PO4.H2O; M.W. 137.99), (sodium dihydrogen orthophosphate monohydrate)], prepared by dissolving 6.09 gram in 50 ml, and mix. Allow the resulting solution to stand for 10 minutes to precipitate the colloidal ferric hydroxide. Dilute with water to volume, and mix. Centrifuge this solution at 3000 rpm for 15 minutes. Pass the resulting solution through a filter, discarding the first two ml of the filtrate.

The optical rotation of resulting solution was measured in 1 dm tube at 20°C on polarimeter and percentage of sucrose was calculated by this equation.

Were, α = observed rotation; L= length of polarimeter tube; M= volume in ml of sample or weight in gram of sample

Preparation of Calibration Curve (Linearity): Accurately weighed Sucrose standard were transferred to a volumetric flask to make a standard working solutions equivalent to 10, 20, 30, 40, 50, 60, and 70 mg per ml with water. Each solution was measured under the operating polarimeteric condition as described above and rotations were recorded. Calibration curves were constructed by plotting the rotation versus the concentration, and the regression equations were calculated. Each response was average of three determinations (fig. 4). 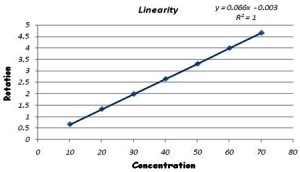 FIGURE 4: A GRAPH OF LINEARITY

Analysis of Marketed Formulation: SUCRONIR injection (Iron Sucrose Injection) (20 mg of elemental iron and 260-340 mg of Sucrose per ml) was taken in 50 ml volumetric flask. After treatment of sample as described above, the volume was made up to the mark with water to get final concentration. The optical rotation of resulting solution was measured in 1 dm tube at 20°C on polarimeter and percentage of sucrose was calculated by the equation. The analysis of procedure was repeated three times with SUCRONIR injection formulation.

As there was no interference of monobasic sodium phosphate solution and also no change in the observed rotation at 20°C on polarimeter, the method was found to be specific and also confirmed with the results of analysis of formulation

TABLE 1: THE RESULTS OF VALIDATION PARAMETERS AND SYSTEM SUITABILITY PARAMETERS

TABLE 5: COMPARISON OF ASSAY RESULTS BY DEVELOPED AND REPORTED METHOD

Comparison with Reported RP-HPLC Method: The developed method was compared with reported RP-HPLC method by applying student-t Test (paired-t-test) to the assay result. The results of t-test revel that t-table value is more than t-cal value. This shows that there is no significant difference between two methods.

So both the methods, Polarimeteric and RP-HPLC, could be used for estimation of Sucrose in Iron Sucrose from Raw material, Inprocess Bulk formulation and Pharmaceuticals formulations.

CONCLUSIONS: The developed method was validated in terms of accuracy, repeatability, and precision. A good linear relationship was observed for Sucrose in the concentration ranges of 10–70 mg per ml. The correlation coefficient for Sucrose was found to be 1.0000. The inter-day and intra-day precision results were good enough to indicate that the proposed method was precise and reproducible.

Simplicity, ease of operation and short time required for analysis makes the developed Polarimeteric method a useful tool for routine analysis of Sucrose in Bulk, Raw material as well as in pharmaceutical formulation.