A NEW TARGET FOR DIABETES: HOMOLOGY MODELING AND IDENTIFICATION OF POTENTIAL LEADS THROUGH VIRTUAL SCREENING

A NEW TARGET FOR DIABETES: HOMOLOGY MODELING AND IDENTIFICATION OF POTENTIAL LEADS THROUGH VIRTUAL SCREENING

ABSTRACT: Monocarboxylate transporter 11 (MCT11) is a transporter protein encoded by the SLC16A11 gene. MCT11 protein is found to play an important role in many biological activities in different species. MCT11 helps in hepatic lipid metabolism by catalyzing the transport of pyruvate molecules across the membrane. It is also found to be involved in regulation of Diabetes. Therefore, MCT11 protein is taken into consideration for this study. Moreover, a rapid analysis through different protein databases revealed that there is no protein crystal structure available. Therefore, Homology modeling is adopted to generate the model using SWISS-MODEL and validated using PROCHECK. More specifically, this is the first Homology model developed for the MCT11 protein. The sequence analysis studies such as physicochemical properties such as molecular weight (47790.99 Da), Theoretical isoelectric point (8.67), Total number of positively (Asp+Glu) and negatively (Arg+Lys) charged residues (+R/-R) were 19 and 22 respectively. The grand average of hydropathicity (GRAVY) indicating a value of 0.687 was computed. The secondary structure prediction and conserved domain sequence were computed. Finally, the modeled protein subjected to virtual screening to identify the possible leads using PyRX software, which uses the Autodock Vina module for virtual screening. About 1943 compounds were screened virtually and 10 compounds were found to be extremely effective having binding energies range from -11.0 Kcal/mol to -11.60 Kcal/mol.

INTRODUCTION: Diabetes mellitus is a non-communicable, pandemic metabolic disorder characterized by intolerance to glucose and alterations in lipid and protein metabolism 1. The major problem arises when the pancreas is inefficient to produce insulin or body unable to use the produced insulin, which is also known as “Insulin resistance” 2.

Type 2 diabetes occurs when these two conditions amplified and lead to increased levels of glucose in the blood, which is a hallmark of Type 2 diabetes 3. Chronic diabetic patients who are untreated suffer from complications such as retinopathy, nephropathy, and peripheral neuropathy. Acquiring other types of risks such as cardiovascular disease and cancer are also higher in diabetic patients 4.

According to the recent 2017 reports of the International Diabetes Federation, over 425 million diabetic patients are present worldwide, and it is estimated that about 325 million people are at risk of developing diabetes 5. The major symptoms of Type 2 diabetes include excessive thirst and dry mouth, recurrent fungal infections in the skin, frequent and abundant urination, slow healing wounds, blurred vision, lack of energy and extreme tiredness 6. The radical risk factors include primarily the family history, overweight, unhealthy diet, physical inactivity, increasing age, high blood pressure, impaired glucose tolerance (Impaired glucose is higher than normal blood glucose but below the threshold for diagnosis), and poor nutrition during pregnancy 7.

Many classes of medications are available to target different cellular mechanisms to treat this condition. The two main treatment approaches include the stimulation of insulin release 8 and insulin-stimulated glucose uptake 9. However, Therapeutic response varies from person to person, and it requires multiple medications to maintain blood glucose levels. On the other hand, all these drugs have moderate to serious adverse effects 10. Therefore, there is a need to identify the new therapeutic agents which target specifically to a selective target protein that plays a role in disease strategy. It has been uncovered that diabetes does not only occur due to the environmental factors but also due to the heredity 11. Therefore, a deep understanding of the genetic contributions involved in disease incidence might help to focus it more specifically and effectively.

A study conducted by Rusu et al., suggested that chromosome 17p13 is associated with diabetes risk factors in Mexican adults, a population with a high prevalence of Type 2 diabetes 12. “They showed that 12 non-coding variants span the SLC16A11 gene locus and that there are four missense variants in the SLC16A11 gene itself”. The gene SLC16A11 is a member of the SLC16 gene family and estimated that it is linked to an increase in 30% of risk rate in this population 12. Monocarboxylate transporter 11 (MCT11) is a proton-coupled transporter protein that is encoded by SLC16A11, which plays an important role in transporting the monocarboxylates between the cell membrane. A knockdown study conducted on SLC16A11 revealed that a significant increase in intracellular acylcarnitines, diacylglycerols, and triacylglycerols and extracellular triacylglycerols. These above changes strongly suggest that fatty acid and lipid metabolism is affected by Monocarboxylate transporter 11 (MCT11), proteins. Therefore, targeting the MCT11 might lead to personalized treatment of diabetes 13.

Herein, we identified a Monocarboxylate transporter 11 (MCT11) protein as possible therapeutic target to treat type-2 diabetes. However, there is no three-dimensional protein crystal structure deposited in the Protein data bank. The three-dimensional structure of a protein is crucial for understanding the molecular function and its interactions with the biological process 14. Often, proteins play a major role in cell signaling pathways and act as therapeutic targets. Although a great trend is directed towards the structure resolving and deposition in PDB, Some new identified targets structure is still a question due to the risks involved in the crystallization techniques 15. In other hand, due to the exploration of human genome project new sequences tangled up every day. Hence, a bioinformatics approach is needed to model the proteins whose structures are unknown.

Thus, we adopted a Homology modeling method to model the unknown protein structure based on sequence alignment and model building using known identical protein template sequence 16. Homology modeling plays a crucial role in predicting protein structure 17. For the model development, we utilized an online server SWISS Model and generated the model. In homologous complexes, it is been observed that interacting residues are often conserved. Hence, SWISS-MODEL is used in this study to build the homologous model of the protein. This is an automated homology modeling server with increased accuracy for generated models 18.

MCT11 Protein Sequence Analysis: The MCT11 protein sequence originated from Homo sapiens was retrieved from UniProtKB database bearing accession no Q8NCK7. The sequence was saved in FASTA format and further used it for analysis of protein 19.

Secondary Structure Prediction: Several online Bioinformatics tools were adopted to analyze the conserved domains of MCT11 transporter protein. The NCBI conserved domains database (CDD) is used to retrieve the protein annotation. “CDD is a protein annotation resource that consists of a collection of well-annotated multiple sequence alignment models for ancient domains and full-length proteins 21. These are available as position-specific score matrices (PSSMs) for fast identification of conserved domains in protein sequences via RPS-BLAST”. PSIPRED is a secondary structure prediction server, which is simple and works based on neural network analysis developed by the UCL department of computer science 22. InterProScan, a tool developed by The European Bioinformatics Institute (EBI). “This provides a functional analysis of proteins sequence by classifying into families and predicting the presence of domains and important sites” 23.

Alignment of Sequence, Model Building, and Model Validation: MCT11 protein template sequence is searched against the known protein structures sequence and model building is performed using the SWISS-MODEL an online server. In this step, the server compares the unknown sequence with known protein structures deposited in the Protein Data Bank (PBD) 24. The generated model was validated using different tools to ensure the accuracy of model. Ramachandran plot was generated using PROCHEK tool 25.

Virtual Screening: Protein-ligand docking is one of the best computational methods to predict the ligand orientation and conformation in the binding site. AutoDock Vina is an open-source software currently used by many scientists for molecular docking and virtual screening. AutoDock Vina uses empirical scoring function for prediction of protein-ligand affinity. Virtual screening works on molecular docking algorithm to predict the binding energies and interactions. To perform virtual screening we incorporated PyRx software in this work 26 which works on Autodock Vina module. PyRx is a flexible, versatile and user-friendly application to perform virtual screening using AutoDcok 4 and Autodock Vina 27.

Physicochemical Properties: Expasy’s ProtParam server was used to compute the physicochemical properties of the MCT11 protein. A total of 471 amino acid residues were predicted. The molecular weight of 47790.99 Da and the isoelectric point (pI) of protein of 8.67 indicating the slightly basic nature of the protein. The pI values function in protein purification by isoelectric point focusing on a polyacrylamide gel. A total number of positively (Asp+Glu) and negatively (Arg+Lys) charged residues (+R/-R) were 19 and 22 respectively. The Instability index (II) values of 43.33 indicating it an unstable protein and an aliphatic index of 112.14. The grand average of hydropathicity (GRAVY) indicating a value of 0.687. The physicochemical properties were listed in Table 1.

A 471 chain length of MCT11 protein sequence was submitted to the InterProScan Beta tool, which analyses sequence by classifying them into families and anticipates the important sites and finally provides the functional analysis of protein sequence. PSIPRED was secondary structure prediction server, which was simple and works based on neural network analysis developed by the UCL department of computer science.

Alignment of Sequence and Model Building:

Model Validation: Validation of the model is crucial step to ensure the generated model has reliability and properly aligned to the template of structure. Therefore, we validated our model using different methods and tools. The alignment of 3D structures of generated model was verified by aligning with the actual crystal structure.

The calculated Root mean square deviation (RMSD) of the alignment of both models is 0. Indicating that generated model is most similar to template. 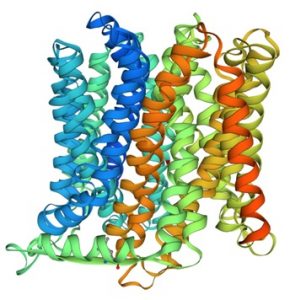 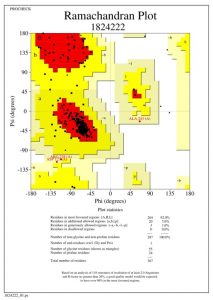 Virtual Screening: In this study, we used anti-hyperglycemic agents downloaded from NCBI-Pubchem Bioassay database. A total of 2103 compounds were downloaded from a project entitled in PubChem Bioassay database “Broad Institute HTS compounds Modulating PGC-1a Acetylation and Oxidative Metabolic function Inhibitor Probe Project” as SDF format and subjected for energy minimization. Three-dimensional conformer generation and duplicate molecules deletion provided a total of 1943 compounds. The homology modeled protein was used for virtual screening; the protein and all the ligands were prepared sing PyRx and Open Babel interfaces respectively. The grid box is setup by considering all the active residues and making sure all the residues are occupied by the grid box. Finally, virtual screening job was performed in PyRx using AutoDock Vina wizard interface. Virtual screening of 1943 compounds generated good binding energies, out of which 75 compounds have binding energy in range of -10.0 Kcal/mol to -11.60 Kcal/mol. The compounds (10) having highest binding energies were shown in Table 2 and all the 10 best compounds were superimposed in binding pocket with their best binding pose which was represented in Fig. 6. 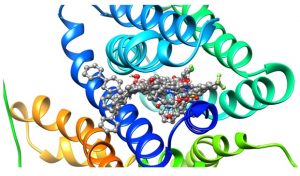 FIG. 6: SUPERIMPOSITION OF ALL THE 10 BEST ACTIVE MOLECULES IN THE BINDING POCKET

CONCLUSION: In this present study, Monocarboxylate transporter 11 (MCT11) protein sequence of Homo sapiens species was selected to identify the possible lead molecules. There was no crystal structure available for MCT11 protein. Therefore, homology modeling was adopted and model was generated using 4d2b known protein crystal structure sequence. Physicochemical and functional characterization of the protein was profoundly investigated. The three-dimensional models of protein were generated using SWISS-MODEL and validated by the accuracy of Ramachandran plot analysis using PROCHECK tool. The results suggested that proposed model is reliable and valid. This study not only provided information on the physiochemical characteristics, structural properties and molecular functions of Monocarboxylate transporter 11 (MCT11) protein, but also the best possible leads from virtual screening. These lead molecules can be further tested in protein-specific bioassay and might help to treat diabetes as personalized medicine.

ACKNOWLEDGEMENT: Authors would like to thank the National Institute of Pharmaceutical Education and Research (NIPER), Medicinal chemistry, Hyderabad for support during the project.

CONFLICTS OF INTEREST: Authors declare no conflicts of interest