The task of achieving efficient delivery of drugs that have poor bioavailability or narrow absorption windows have plagued the pharmaceutically industry for decades. Thus, much research has been dedicated to the development of novel polymeric-based gastro retentive drug delivery technologies that may optimize the bioavailability and subsequent therapeutic efficacy of such drugs. Several technical approaches are currently utilized in the prolongation of gastric residence time, including high-density, swelling and expanding, polymeric mucoadhesive, ion-exchange, raft forming, magnetic and floating drug delivery systems, as well as other delayed gastric emptying devices. The purpose of writing this review on gastro retentive drug delivery systems was to compile the recent literature with special focus on various gastro retentive approaches that have recently become leading methodologies in the field of site-specific orally administered controlled release drug delivery. In this review, the current technological developments of FDDS and marketed products have been discussed. In addition, the pharmaceutical basis of their design, their advantages and future potential for oral controlled drug delivery are discussed.

Introduction: Oral drug delivery is the most widely utilized route of administration among all the routes that have been explored for systemic delivery of drugs via pharmaceutical products of different dosage form. Oral route is considered most natural, uncomplicated, convenient and safe due to its ease of administration, patient acceptance, and cost-effective manufacturing process.1

In order to overcome the drawbacks of conventional drug delivery systems, several technical advancements have led to the development of controlled drug delivery system that could revolutionize method of medication and provide a number of therapeutic benefits.3

Controlled Drug Delivery Systems: Controlled drug delivery systems have been developed which are capable of controlling the rate of drug delivery, sustaining the duration of therapeutic activity and/or targeting the delivery of drug to a tissue.4 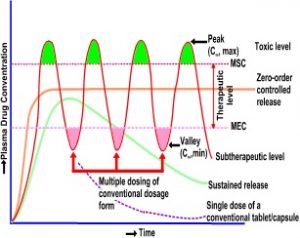 More precisely, controlled delivery can be defined as:-

A controlled drug delivery system is usually designed to deliver the drug at particular rate. Safe and effective blood levels are maintained for a period as long as the system continues to deliver the drug (Figure 1). Controlled drug delivery usually results in substantially constant blood levels of the active ingredient as compared to the uncontrolled fluctuations observed when multiple doses of quick releasing conventional dosage forms are administered to a patient.

Gastro Retentive Dosage Form (GRDF): It is evident from the recent scientific and patient literature that an increased interest in novel dosage forms that are retained in stomach for a prolonged and predictable period of time exists today in academic and industrial research groups. One of the most feasible approaches for achieving a prolonged and predictable drug delivery in the GI tract is to control the gastric residence time (GRT), i.e. gastro retentive dosage form (GRDF or GRDS). GRDFs extend significantly the period of time over which the drugs may be released. They not only prolong dosing intervals, but also increase patient compliance beyond the level of existing controlled release dosage form.10

Stomach: The stomach is J-shaped organ located in the upper left hand portion of the abdomen, just below the diaphragm. It occupies a portion of the epigastric and left hydrochondriac region. The main function of the stomach is to store the food temporarily, grind it and then release it slowly into the duodenum. Due to its small surface area, it provides barrier to the delivery of drugs to small intestine (Figure 2). 12, 13 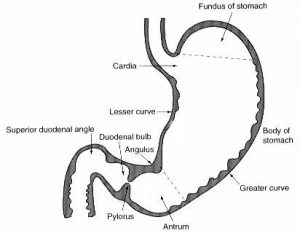 Approaches to Gastric Retention: A number of approaches have been used to increase the GRT of a dosage form in stomach by employing a variety of concepts 14, 15. These include – 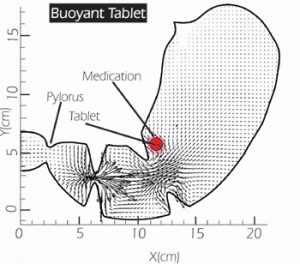 FIGURE 3: GRAPHIC OF BUOYANT TABLET THAT IS LESS DENSE THAN THE STOMACH FLUID AND THEREFORE REMAINS IN THE FUNDUS

Binding of polymers to the mucin/epithelial surface can be divided into three broad categories:– 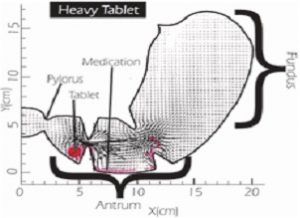 FIGURE 4: GRAPHIC OF HEAVY TABLET WHICH IS DENSER THAN THE STOMACH FLUID AND THEREFORE SINKS TO THE ANTRUM

Types of Floating Drug Delivery Systems (FDDS): Based on the mechanism of buoyancy, two distinctly different technologies have been utilized in development of FDDS that are: 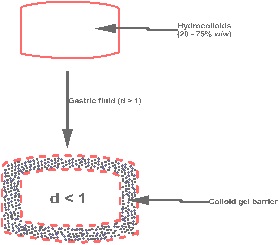 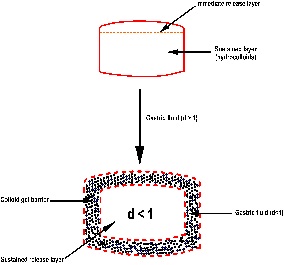 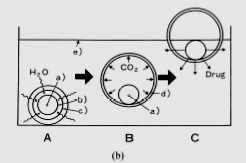 FIG. 7 (B): STAGES OF FLOATING MECHANISM 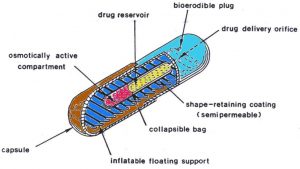 Factors which affect Gastric Retention Time of Dosage Form: The gastric retention time (GRT) of dosage form is controlled by several factors that affect their efficacy as a gastro retentive system.30

CONCLUSION: Floating tablets have plenty of advantages over the conventional tablets. As these floating tablets provide a dosage form which is stable and provides a sustained release dosage form.  The most important application of the floating tablets is that they provide a new possibility of treating the stomach infected with Helicobacter pylori.  These systems help in continuously releasing the drug before it reaches the absorption window, thus ensuring optimal bioavailability.  Several approaches are currently used to prolong gastric retention time. These include floating drug delivery systems, also known as hydrodynamically balanced systems, swelling and expanding systems, polymer bioadhesive systems, modified shape systems, high density systems and other delayed gastric emptying devices.

The principle of buoyant preparation offers a simple and practical approach to achieve increased gastric residence time for the dosage form and sustained drug release.  The most important criteria which has to be looked into for the productions of a floating drug delivery system is that the density of the dosage form should be less than that of gastric fluid. And so, it was seen that these dosage form serve the best in the treatment of diseases related to the GIT and for extracting a prolonged action from a drug with a short half life. In addition to this the FDDS is still more important because of the numerous advantages it offers over the conventional dosage form. The popularity of FDDS is a testimony to its usefulness. Day after day the FDDS shows more promise for a bright future.