ABSTRACT: A new, simple and low cost spectrophotometric method for the determination of teneligliptin, a new DPP IV inhibitor drug in bulk and pharmaceutical dosage form using sodium nitroprusside was developed. The absorbance maximum (λmax) of the resulted colored product was at 445 nm. As different solvents were tried methanol was found to be the most suitable solvent. The Beer’s law has been obeyed in the concentration range of 4 - 20 µg/ml with the detection limits of 0.09µg/ml and limit of Quantification of 0.28µg/ml. The correlation coefficient was found to be (r = 0.9999). The reaction ratio between teneligliptin and sodium nitroprusside was studied and found to be 1:1. The method was validated and results obtained for the assay of two different brands of teneligliptin tablets were compared. The repeatability and reproducibility of the developed method were evaluated and the obtained results quoted.

Literature survey revealed many methods with different analytical techniques for individual or simultaneous determination of teneligliptin. The technique includes HPTLC 5, UPLC 6, HPLC 7 - 10, LC-MS-MS 11, UV 13, 14 and Visible 15, 16 spectrophotometric methods. The techniques other than spectrophotometry require lengthy procedures, highly sophisticated analytical instruments and some amount of the organic solvents contributing towards high cost of the analysis.

Spectrophotometry is the most common, convenient and favourite tool in analytical laboratories due to its inherent sensitivity and low costing. So, we aimed to report the original approach that allows a simple, rapid and improved spectrophotometric determination of teneligliptin avoiding lengthy procedure and minimizing the use of hazardous chemicals. Many spectrophotometric methods adapted SNP as an analytical reagent in their applications, including determination of   bowel-specific aminosalicylate drug 17, selective angiotensin AT1 receptor blocker 18, piperazine antihistamine 19, antiprotozoal 20 aminoacid lysine derivative 21, aminoglycoside 22.

This paper deals with the use of Sodium nitroprusside as a chromogen for the spectro-photometric assay of Teneligliptin.

In the present work, simple and sensitive visible spectrophotometric method was developed and validated for the analysis of teneligliptin with broad linearity, good precision and accuracy. These methods could be applied for the quantitative determination of the teneligliptin in their tablet formulations.

Preparation of Reagents and Solutions:

Standard Solution of Sodium Nitroprusside: 0.4% w/v of sodium nitroprusside was prepared by dissolving 0.400g in distilled water in 100 ml volumetric flask and diluted upto the mark with water.

Standard Solution of Hydroxyl Amine HCl: 0.4% w/v of Hydroxyl amine HCl was prepared by dissolving 0.400 g in distilled water in 100ml volumetric flask and diluted upto the mark with water.

General Procedure: Aliquots (0.2 - 1.0 ml) of Teneligliptin standard solution were transferred in to 10 ml volumetric flask. To each flask 1ml of Sodium nitroprusside, 0.9 ml of Hydroxyl amine HCl, and 1 ml of Sodium Carbonate solutions were added. The volume was then made upto the mark with water and absorbance of each solution was measured at 445 nm.

Preparation of Sample Solution: The tablet formulation of Teneligliptin labelled to contain 20 mg was purchased. Twenty tablets were accurately weighed and finely powdered in a mortar. A portion of tablet powder equivalent to 20 mg was weighed and transferred into 50 ml volumetric flask. 20 ml of 0.1 M NaOH was added and the mixture was sonicated for 15 min. The mixture was filtered through Whatman No. 1 filter paper. The solution was made up to the mark with distilled water and contents were analysed by the proposed method.

The reaction was studied under various conditions of Sodium nitroprusside, Hydroxyl amine HCl, Sodium carbonate concentration and reaction time was studied to determine the optimum conditions for the method. 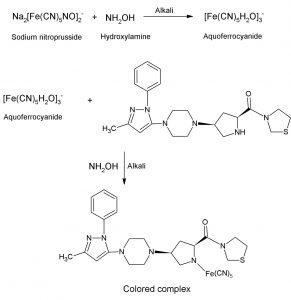 The effect of time on the formation of the yellow colored complex was also optimized. At room temperature, the color intensity of the product increased by the elapse if time, maximum absorbance was obtained at 2 minutes and remained constant for 20 minutes. The results indicated that the yellow colored product obtained was stable for 10 hrs Fig. 5.

[Do]  = Concentration of the drug,

[Ao] = Concentration of the reagent,

ε = Molar absorptivity of the complex at 445 nm,

Kc = Association constant of the complex.

The results are summarized in the Table 1. The negative values of the standard free energy indicated that the complexes are stable and started to form spontaneously.

TABLE 1: THERMODYNAMIC STUDIES, LINEARITY AND SENSITIVITY OF THE PROPOSED METHODS

Stiochiometry of Ion Pair Complex: Jobs method of continuous variation was employed to determine the composition of the ion pair complex 25. For this, solutions of identical concentrations (1.1 × 10-3 M) of the drug and reagent were prepared and mixed in varying volume ratios such that total volume of each solution was constant. The absorbance of the resulting complex was measured at 445 nm. The absorbance values were plotted against mole fraction of drugs. The stiochiometry ratio observed for drug dye ion pair complex was 1:1 as evident from the results in Fig. 6. 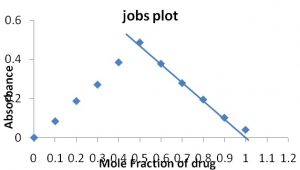 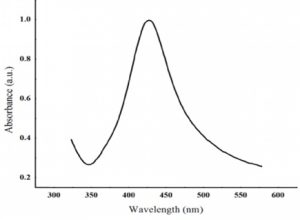 Specificity: Specificity of proposed spectro-photometric method was evaluated by analyzing standard solution of Teneligliptine in the presence of common excipients of pharmaceutical preparations such as lactose, sucrose, starch, mannitol and magnesium stearate. The results indicated that there is no interference from excipients Fig. 7.

Sensitivity: According to the ICH guidelines, the sensitivity parameters like molar absorptivity, Sandell’s sensitivity, Limit of Detection and Limit of Quantification were calculated and summarized in Table 1.

Linearity: The relation between the absorbance and final concentration of Teneligliptine was found to be linear over the concentration range of 4 - 20 μg/ml. Results are shown in Fig. 8.

Precision: The repeatability (intra-day precision) of the proposed method was determined by replicate analysis (n = 5) of standard solutions at three concentration levels (2 μg/ml, 6 μg/ml and 10 μg/ml). The intermediate precision (inter-day precision) was conducted by repeating the analysis over a period of three consecutive days. The precision of the methods   was expressed as standard deviation (SD) and percentage relative standard deviation (% RSD). The results are summarized in Table 2. The SD and % RSD obtained by both methods are found to be in the acceptable range. Therefore, it can be considered to be satisfactory.

The average recovery and percentage standard deviation values Table 3 of the methods lying in the acceptable range show that the methods are accurate.

TABLE 2: ACCURACY AND PRECISION OF THE PROPOSED METHODS

The robustness of the methods was assessed by analyzing the Teneligliptine at two different concentration levels (4 and 20 μg/mL). The percent recovery and % RSD of the method Table 4 was found to be satisfactory, indicating that the method is robust.

The reagent used in the developed method is cheap and readily available. From the values of molar absorptivity, Sandell's sensitivity, LOD and LOQ, it was observed that the new method is more sensitive than the reported methods.

ACKNOWLEDGEMENT: I express my sincere thanks to Dr. M. Bhagavan Raju, principal for his support and encouragement throughout my research work. I am also thankful to Sri Venkateshwara College of Pharmacy for providing chemicals and instruments and Hetero Labs Pvt. limited Hyderabad for providing drug samples for research.