ABSTRACT: The field of cancer research has been emerged in recent years for the development of specific drugs to cancer treatment. New agents with the ability to provide efficient treatment by reducing side effects has led to new opportunities for improving agents for cytotoxic therapies. While there are several drugs for colon cancer treatment, researchers are trying to evaluate new agents or combinations of existing ones which can be used efficiently. Schiff bases with a wide range of variety and biological properties including anticancer activity might be used for colon cancer treatment. In the current study, a novel schiff base derivative synthesized by our group was tested in vivo for colon cancer. In a model of azoxymethane (AOM) induced colorectal cancer, chemopreventive properties of schiff base was also analyzed in rats. While AOM induced de novo crypt formation, adenocarcinoma and dysplasia development, schiff base application reduced the number of aberrant crypt foci (ACF), dysplasia or adenocarcinoma. Analysis of the intestinal mucosa showed that peritoneal administration of SB complex not only decreased the protein expression of COX-2, Bcl-2 and NF-κB but also enhanced the Bax expression suggesting the apoptotic and anti-proliferative effects for this compound. Our findings showed that SB complex might be used for the colorectal cancer treatment. Further studies are highly warranted to obtain additional insights and identify mode of action for the schiff base.

INTRODUCTION: After several years of efforts, the investigation of novel chemotherapeutic agents for cancer treatment has becoming a flourishing area against the traditional chemotherapy, which is well known for its serious side effects and toxicity. Cancer as a major health problem all around the world causes 1 in 4 deaths in the United States.

In recent years monoclonal antibodies have been effectively used for the combination therapy strategies developed for metastatic colorectal cancer 4. New and alternative chemotherapy could be considered as a solution for the treatment of this cancer, resulting in the destruction of malignant cells, while having no non-specific toxicity on the other healthy cell types.

First characterized by Hugo Schiff in 1864, Schiff bases and their metal complexes are derived from the condensation reaction of primary amine and carbonyl compounds.  Schiff bases were reported not only to have antibacterial and anti-fungal properties 7 but also to be effective against cancer cells 8. Although there are different hypothesis for their anti-tumor activities, the exact mechanism of their action is not known as the anticancer effect can vary depending on the cancer type and the compound itself. It was suggested that the hydrogen bond formation between N–H and the nitrogen atoms of DNA and/or copper binding to the DNA or to the protein could provide the anti–tumor effect of Schiff bases 9-10.

Hetero-dinuclear copper(II) Mn (II) complex (SB) was synthesized and characterized by our group as described previously 11. Prepared reagent was kept at room temperature in a light-protected tube until use.

Male Wistar rats (n= 84, 8 wk-old), weighing 200–215 g, were obtained from Firat University Research Center (Elazig, Turkey). Rats were kept in an environmentally controlled room at constant temperature (21 ± 1 oC) and humidity (50 ± 5%), under a 12h long light/dark period. The animals had free access to water and standard rodent diet ad libitum. The experiment was conducted under the protocol approved by the ethical committee of Firat University. All procedures were conducted in strict compliance with relevant laws, the Animal Welfare Act, Public Health Services Policy, and guidelines established by the Institutional Animal Care and Use Committee of the university.

Rats were randomly divided into six groups, each consisting of 14 rats, as indicated in Table 1.

The animals were injected subcutaneously with azoxymethane (Sigma Aldrich, AOM), a specific carcinogen that was diluted in saline, once per week (15mg/kg body weight), over a 3-week period to induce colonic tumors. SB complex was given intraperitoneally as a candidate chemotherapeutic agent in two concentrations (1mg/kg and 2mg/kg of body weight) to the animals in every four days. Rats were decapitated twenty weeks after the starting of the experiment, and colorectal tissues were collected for histopathological and western blot analyses. Colons were opened flat overnight on hibond C paper for Aberrant Crypt Foci (ACF) analysis. A distal segment of normal-appearing colon (2 cm) free of neoplasms was dissected for western blot analysis (6/group).

The colorectal tissues from each animal were collected and fixed in 20% neutral buffered formalin solution. The samples were then progressively dehydrated, inserted in paraffin, cut into small sections, and stained with hematoxylin and eosin for histological examination.

The protein levels in colon samples were determined by Western blotting as previously described 12. Aliquots of colon tissues from 6 rats per group were pooled and homogenized in ice-cold lysis buffer (50 mM Tris, 1% NP40, 0.5% sodium deoxycholate, 0.1% SDS, 5 mM EDTA, 2 mM PMSF and protease inhibitors) and then centrifuged at 15000 rpm for 60 minutes.

The concentration of protein in supernatants was determined using the Bio-Radprotein assay. Equal amounts of proteins (20 µg) were separated on SDS-PAGE gels, proteins were transferred to a nitrocellulose membrane using semi-dry transfer and the membrane was blocked with 5% skim milk, probed with Bcl-2, Bax, COX-2 and NF-κB antibodies (Abcam) and stained with secondary antibody (goat anti-mouse IgG). Western blot was repeated four times for each sample. Each membrane was re-probed with anti-β-actin antibody (Sigma). The band intensity was quantified by densitometric analysis using the image analysis system Image J (NIH, Bethesda, USA), and normalized to the β-actin band intensity.

We also assessed the effect of schiff base application on body weight change. Initial body weight (IBW) and final body weight (FBW) were measured and calculated. Body weight was not significantly changed in either control or experimental groups (data not shown).

TABLE 2. THE EFFECTS OF SCHIFF BASE APPLICATION ON THE DEVELOPMENT OF ABERRANT CRYPT FOCI (ACF), DYSPLASIA, AND ADENOCARCINOMA IN THE INDICATED GROUP OF RATS 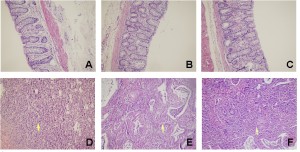 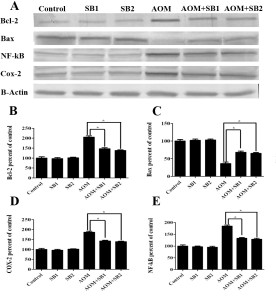 FIGURE 2. EFFECTS OF SCHIFF BASE ON PROTEIN EXPRESSION LEVELS. DATA ARE MEANS OF QUADRUPLETS OF ASSAYS AND EXPRESSED AS RELATIVE TO CONTROL (%). VALUES ARE MEANS ± STANDARD ERROR OF THE MEAN. ACTIN WAS INCLUDED TO ENSURE EQUAL PROTEIN LOADING. (*P<0.05 FISHER'S COMPARISON TEST) (A) GEL IMAGE OF WESTERN BLOT ANALYSIS AND NORMALIZED PROTEIN EXPRESSION LEVELS OF (B) Bcl-2, (C) Bax, (D) Cox-2, and (E) NF-κB.

DISCUSSIONS: Colon cancer is one of the most common cancers that develops in several stages characterized by hyperproliferation and crypt formation. Metastases to lymph nodes is the main cause for the morbidity 13. Current practices for colon cancer treatments encompass combination therapies including fluoropyrimidines, irinotecan or oxaliplatin with side effects depending on the application regimen. Although there are several agents used for colon cancer treatment, new options are required to provide efficient cytotoxic therapy preventing metastasis and reducing mortality.

Investigation of new chemotherapeutics is of great interest in colon cancer research to provide efficient and safe therapy minimizing side effects. Schiff bases with their broad biological activity could be useful for cancer treatment. In the current study we tested the effects of a novel schiff base derivative on the AOM established colorectal cancer model. ACF, adenocarcinoma and dysplasia development were significantly diminished by Schiff base administration. The results from animal experiments highlight that effect of Schiff base differ based on applied concentration. ACFs are preneoplastic lesions for colorectal cancer and more than four aberrant crypt formations can be accepted as colon carcinogenesis 14.

Schiff base application reduced the number of ACFs. Proliferating cells and tumor growth rate were also reduced in the Schiff base group compared to control. The results confirm that Schiff base can inhibit the chemically induced colon carcinogenesis in the rat animal models. Cyclooxygenase-2 (COX-2) as an enzyme responsible for prostaglandin biosynthesis is expressed high levels in cancer situations 15. Drugs targeting COX-2 those related with NSAIDs (nonsteroidal anti-inflammatory drugs) were found to reduce colorectal cancer development 16. In the study COX-2 protein expression level was analyzed to observe whether Schiff base application has a protective effect against colon cancer. Although Schiff base application significantly decreased the COX-2 expression, further studies are required to elucidate the exact mechanism for COX-2 inhibition.

In order to detail how COX-2 inhibition is regulated we tested the nuclear factor-kappa B (NF-κB) expression which mediates the COX-2 expression induced by inflammation 17. The results from western blot studies indicates that a similar correlation exist about expression patterns of COX-2 and NF-κB. NF-κB was also reduced in treatment groups. NF-κB as a transcription factor is involved in many responses including inflammation, cell proliferation and apoptosis 18. The similarity of western blot results might be explained by these interactions. In addition, inhibition of cell proliferation in the treatment groups is highly associated with apoptosis. A strong correlation was found between anti-apoptotic Bcl-2 and apoptotic Bax genes. While Bax expression was enhanced, Bcl-2 expression was decreased as expected indicating the induction of apoptosis by Schiff bases.

CONCLUSIONS: Taken together, results of the current study clearly demonstrated that Schiff base attenuates AOM induced carcinogenesis by regulating the inflammatory and apoptotic pathways. This is the first study showing the effect of a novel Schiff base hetero-dinuclear copper (II) Mn (II) complex on colon carcinogenesis. This study will bring the usage of this Schiff base a step closer to the clinical applications as a chemotherapeutic agent. Despite successful results of the study, several researches about action of mechanism should be completed to increase efficiency of the drug.

ACKNOWLEDGEMENTS: This work was partially supported by grants from Turkish Academy of Science, Ankara (TUBA) (K.S.).