ABSTRACT: An isocratic HPLC method with UV detection at 225nm is described for simultaneous determination of Guaiphenesin, Chlor-pheneramine Maleate & Dextromethorphan HBr. Chromatographic separation of all three drugs were achieved on Purospher star RP-18e column (Merck) using Mobile phase as 74% Buffer (prepared by dissolving 1.8g dipotassium hydrogen orthophosphate in 1 litre of HPLC grade water, adjusting pH-3 with phosphoric acid) & 26% Acetonitrile. Method offers simplicity, good linearity, symmetric peak shape, and good resolution is achieved in a run time of 13 minutes. The method has been validated for Specificity, Linearity, Accuracy, and Precision. Stress testing which covered Oxidation, acid  and alkali hydrolysis, photolysis and thermal degradation was performed on individual molecules under test to prove the specificity of the method and the degradation products formed were resolved effectively. It has a very good linearity with correlation coefficient value more than 0.999,  % recovery for Guaiphenesin, Chlorpheneramine Maleate &  Dextromethorphan HBr obtained were between 99-101%, and  the relative standard deviation for 5 replicates obtained was less than 0.5%.

INTRODUCTION: Guaiphenesin (figure 1) chemically named as (RS)-3-(2methoxyphenoxy) propane1, 2-diol 1, 2. It is an only expectorant recognized as safe and effective by the FDA. Often it is used with antihistamines, decongestants and antitussives in combination product. Guaiphenesin is an expectorant which increases the output of phlegm (sputum) and bronchial secretions by reducing adhesiveness and surface tension. The increased flow of less viscous secretions promotes ciliary action and changes a dry, unproductive cough to one that is more productive and less frequent.

By reducing the viscosity and adhesiveness of secretions, Guaiphenesin increases the efficacy of the mucociliary mechanism in removing accumulated secretions from the upper and lower airway 3.

Dextromethorphan HBr (figure 2) is ent-3-methoxy-9a-methylmorphinan hydrobromidemono- hydrate, the d-isomer of the codeine analog of levorphanol. Dextromethorphan shows high affinity binding to several regions of the brain, including the medullary cough center.

This compound is an NMDA receptor antagonist (receptors, N-methyl-D-aspartate) and acts as a non-competitive channel blocker. It is one of the widely used antitussives, and is also used to study the involvement of glutamate receptors in neurotoxicity [PubChem].

Dextromethorphan suppresses the cough reflex by a direct action on the cough center in the medulla of the brain. Dextromethorphan shows high affinity binding to several regions of the brain, including the medullary cough center. This compound is an NMDA receptor antagonist and acts as a non-competitive channel blocker. It is one of the widely used antitussives, and is also used to study the involvement of glutamate receptors in neurotoxicity 3.

Chlorpheneramine Maleate (figure 3) is (RS)-3-(4-chlorophenyl)-3-(pyrid-2-yl)propyldimethylamine hydrogen Maleate. It is histamine H1 antagonist used in allergic reactions, hay fever, rhinitis, urticaria, and asthma. It has also been used in veterinary applications. One of the most widely used of the classical antihistaminics, it generally causes less drowsiness and sedation. It is widely used in cough syrups in combination with other drugs [PubChem].

During literature survey, many methods for simutaneous estimation of Guaifenesin with dextro-methorphan/acetaminophen/phenylephrine/chlorpheneramine/pseudoephedrine/phenylpropanolamine 4, 5, 6, 7 were reported but only one method for simultaneous estimation this combination (Guaiphenesin, Chlorpheneramine Maleate & Dextromethorphan HBr) of drugs was found, which employs methanol as organic solvent for elution8. Mobile phases with methanol show more backpressure, may have more noise at lower wavelengths, thus giving less S/N values and affecting the LOD/LOQ values.

The proposed method employs Acetonitrile instead of methanol for elution, which has low backpressure and less noise at the detection wavelength.

Moreover an attempt has also been made to prove the specificity of the method by performing stress studies on three drugs individually, and method is capable of separating the degradation products from the main peak of interest.

Hence, an attempt has been made to develop and validate the procedure in accordance with ICH guidelines. 9

Chemical Reagents: Guaiphenesin, Chlor-pheneramine & Dextromethorphan HBr of IP grade were used for the test. Acetonitrile & Dipotassium hydrogen orthophosphate of chromatographic grade were obtained from Merck. All other chemicals were of Analytical grade.

Preparation of sample: 2.5ml of cough syrup was diluted to 100ml with mobile phase.

Separately inject 20ul each of standard & sample preparation & measure the responses for the major peaks.

Method Development & Validation: Selectivity: Selectivity is the ability of the analytical procedure to differentiate & quantify the analytes in the presence of other components in sample. Forced degradation studies were done to build confidence in the analytical method.

The results suggest that drugs Chlorpheneramine & Dextromethorphan HBr are sensitive to oxidation (figure 4) & Photolysis (figure 5), and thus are unstable in these conditions. The proposed method is capable to differentiate between the analyte & degraded products. 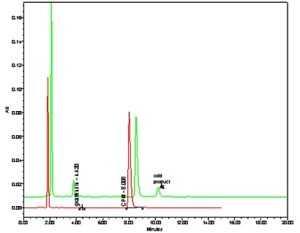 FIGURE 4: A REPRESENTATIVE CHROMATOGRAM OF SEPARATION OF OXIDATION PRODUCTS OF CHLORPHENERAMINE FROM THE MAIN PEAK

FIGURE 5: A REPRESENTATIVE CHROMATOGRAM OF SEPARATION OF PHOTOLYTIC PRODUCTS OF DEXTROMETHORPHAN HBr FROM THE MAIN PEAK

System Suitability: System suitability was performed by analyzing standard solutions. Parameters like Theoretical plates (N), Tailing factor, Resolution (Rs), Capacity factor (K), were determined. Repeatability was performed by 5 replicate injections, and RSD of peak areas of all 3 drugs was below 0.4A representative chromatogram is shown in figure 6. Table showing the values for system suitability parameters is given in Table 1.

FIGURE 6: A REPRESENTATIVE CHROMATOGRAM OF GUAIFENESIN, CHLORPHENERAMINE, AND DEXTROMETHORPHAN HBR IN RAW MATERIALS

Linearity: Linearity curves were obtained with 5 concentration levels and regression value (R2) was above 0.999. Individual linearity range established was 125-375ppm for Guaiphenesin, 6.25-18.75ppm for Chlorpheneramine Maleate, and 12.5-37.5ppm for Dextromethorphan HBr. The individual values of Correlation coefficient, slope are given in Table 2  and graph showing the linearity for Guaiphenesin, Chlorpheneramine, and Dextro-methorphan HBr is given in Figure 7. 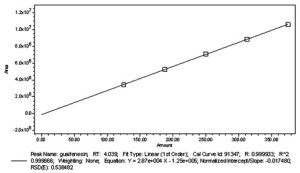 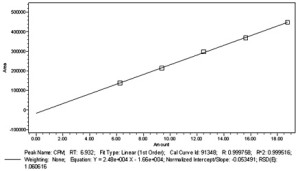 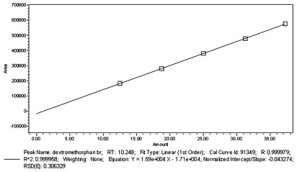 Limit of Detection (LOD) & Limit of Quantitation (LOQ): LOD was established at S/N ratio of 3.3 & LOQ at S/N ratio of 10. LOD & LOQ were verified by injecting standard samples of their respective concentrations. These value shows that analytical concentration of drug is much above the LOQ limits. Individual values for each drug are provided in Table 2.

Accuracy: Accuracy is the closeness of agreement between a measured value and the true value. Accuracy was determined on the product by injecting 3 replicates of 3 different known concentrations by adding known amounts of drugs to the matrix (80%, 100%, and 120% of nominal values).

The results obtained correspond to the amount of drug present in the sample. % Recovery for individual drugs is mentioned in Table 3,   RSD values obtained were below 0.3%.

Precision: Precision is the measure of method variability. It was performed on standard solutions of 3 different concentrations 80%, 100%, 120% of the established concentration, for all the 3 drugs. Individual values for SD, RSD are given in Table 4.

Intermediate precision: was also established by injecting 3 replicates of 3 different concentrations, the next day and RSD was found below, 0.5%

Stability of Analytical solution: Stability of both standard & test solutions were determined by measuring the peak responses at 0hr & 8 hrs, there was no significant difference after 8hrs.

Method Application: The validated LC method was successfully applied to determination of cough syrup containing Guaiphenesin-50mg, Chlor-pheneramine Maleate 2.5mg, Dextromethorphan HBr 5mg and Ammonium Chloride 60mg per 5ml, 3 batches of the product were analyzed & assay results were accurate & corresponds to the drug added. A representative chromatogram is shown in Figure 8.

It produces symmetric peaks with less tailing, good resolution and reasonable time for estimation. It can be used for simultaneous estimation of Guaiphenesin, Chlorpheneramine Maleate, and Dextromethorphan HBr in cough syrup formulation and other dosage forms for routine analysis.

ACKNOWLWDGEMENTS: The author is grateful to Managing Director, Overseas Health Care Pvt. Ltd., for providing necessary facilities and encouragement. Author is also thankful to all the staff of Quality Control Department for their generous help during research study.