ABSTRACT:  A simple, specific, and precise stability indicating reverse phase high performance liquid chromatography method was developed and validated as per the ICH guidelines for the simultaneous determination of Moxifloxacin and Prednisolone in bulk and combined dosage forms. The quantification was carried out by using Zodiac C18 (250mm*4.6mm, 5μ) column at 250c with Acetate Buffer pH 4.5: Methanol: Acetonitrile in ratio of 50:20:30 % V/V as mobile phase. The flow rate is 1 mL/min and the estimation was carried out by using PDA detector at 271 nm. The retention time of MFX and PDS were 2.317 and 4.310 minutes respectively. The linearity was observed from 30-70μg/mL with correlation coefficient 0.9999 for Moxifloxacin and 60-140 μg/mL with correlation coefficient 0.9998 for Prednisolone. The LOD and LOQ of Moxifloxacin and Prednisolone were found to be 4.85 & 14.69μg/mL and 9.07 and 27.47μg/mL respectively and the Statistics data for the MFX and PDS were concluded that the method was found to be simple, reliable, selective, reproducible and accurate. The method was successfully used for quality control analysis of Moxifloxacin and Prednisolone

INTRODUCTION: Moxifloxacin is 1-Cyclopropyl-6-fluoro-1, 4-dihydro-8-methoxy- 7-[(4aS, 7aS)-octahydro-6H-pyrrolo [3, 4-b] pyridin-6-yl]-4-oxo-3-quinoline carboxylic acid 1 is an orally active fourth generation fluoroquinolone antibiotic.  MFX acts by binding and inhibiting Topoisomerase- II (DNA-gyrase) and Topoisomerase-IV enzymes, which are responsible for the coiling and uncoiling of DNA,

which are needed for bacterial cell repair and replication 2 and it is active against both Gram-positive and Gram-negative bacteria 3. Moxifloxacin differs from other quinolones in that it has a methoxy function at C-8 position and a diazabicyclonyl moiety with S, S-configuration at the C-7 position 4 and its molecular formula and molecular weight is C21H24FN3O4 and 401.43 g/mol. It is mainly used for the treatment of bacterial infections of community-acquired pneumonia, chronic bronchitis, soft tissue infections 5, conjunctivitis (pink eyes), and lung infection 6.

Prednisolone is 11β, 17α, 21-trihydroxypregna-1, 4-diene-3, 20-dione 7, 8 and Prednisone is a prodrug which is bio transformed to Prednisolone in the liver 9. It is mainly used for the treatment of a wide range of inflammatory and auto-immune diseases 10 such as asthma 11, multiple sclerosis 12, rheumatoid arthritis 13, autoimmune hepatitis 14. Moxifloxacin and Prednisolone is a one of the newer combination of dosage form which is beneficial for the treatment of various bacterial infections. Chemical structures of Moxifloxacin and Prednisolone are shown in Figure 1 & 2 respectively. 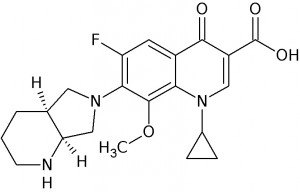 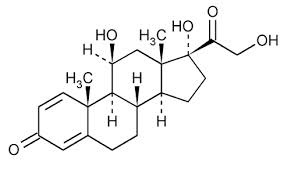 The stock solution prepared from pure drugs of 0.05g of Moxifloxacin and 0.1g of Prednisolone were taken in 100 mL volumetric flask and dissolved in 25mL of HPLC grade methanol, and diluted up to the mark with mobile phase.

The standard solution prepared from 1mL of stock solution was taken in 100 mL volumetric flask and diluted up to the mark with mobile phase to get a concentration of 50 μg/mL of Moxifloxacin and 100μg/mL of Prednisolone.

Dissolve 77.1 g of ammonium acetate in water add 70 ml of glacial acetic acid, and dilute up to 1000 mL with HPLC grade water (filtered through 0.2μ filters) and degassed. Adjust the pH to 4.5 by 0.1M ortho phosphoric acid.

1mL of eye drops solution was taken and transferred to the 100 mL volumetric flask, then made up to the volume with mobile phase. This solution was placed in an ultrasonicator for 20 minutes and filtered through a 25 mm, 0.45 μm nylon syringe filter.

Prominence SHIMADZU HPLC system consisting of an inbuilt SIL-10A auto sampler, CTO-10A column oven, LC 20 AT pump, SPD 20A detector, and  DGU-14A degasser was employed throughout the analysis. The method development and forced degradation studies were performed on Zodiac C18 column and a sonerex sonicator was used for sonication. The data were acquired by using the CLASS-VPTM software.

Chromatography was performed on a Zodiac C18 column using mobile phase containing mixture of Acetate Buffer (pH 4.5): Methanol: ACN in ratio of 50:20:30% V/V. The mobile phase was filtered through membrane filter (0.45 µm), and vacuum degassed by sonication prior to use. The pump pressure and run time was maintained at 1500-2500 psi and 6 minutes respectively. Chromatography was performed at 250C with flow rate at 1 mL/min and detection was carried out at 271 nm. Instrumentation and optimized chromatographic conditions for proposed method details are shown in Table 1.

Validation study of Moxifloxacin and Prednisolone:

The Method validation was performed as per ICH guidelines for the simultaneous estimation of Moxifloxacin and Prednisolone in bulk and combined dosage form. The method was validated with respect to parameters including accuracy, precision, linearity, robustness, specificity, system suitability, LOD and LOQ 15.

Assay of Moxifloxacin and Prednisolone:

The developed method was applied to the assay of Moxifloxacin and Prednisolone in combined dosage forms. The drug content was estimated with an average of six determinations, and results were given in Table 2. The results were similar to the labeled claim of market formulations. The standard and sample chromatograms of Moxifloxacin and Prednisolone were shown in Figure 3 and 4 respectively.

The accuracy was determined by calculating the recovery of Moxifloxacin and Prednisolone at 100%, 120%, and 140% and they were added to pre quantified sample solution. The recovery studies were carried out in the dosage form in triplicate each in the presence of placebo.

TABLE NO 2: ASSAY RESULTS OF MOXIFLOXACIN AND PREDNISOLONE FORMULATIONS

TABLE 3: RECOVERY DATA FOR THE PROPOSED RP-HPLC METHOD FOR MFX

TABLE 4: RECOVERY DATA FOR THE PROPOSED RP-HPLC METHOD FOR PDS 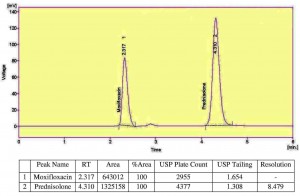 Precision should be investigated by using authentic, and homogeneous samples. The precision of this method was expressed as S.D and %RSD of series of repeated measurements. Precision of MFX and PDS determination by proposed method were ascertained by repeated analysis of homogeneous samples of moxifloxacin and prednisolone standard solutions in the intraday under the similar conditions. The method precision results were shown in Table 5.

Linearity of the proposed method was established by using series of standard solutions of Moxifloxacin and Prednisolone and these studies are repeated in triplicate with different stock solutions. The curve obtained by concentration on x-axis and peak area on y-axis against showed linearity in the concentration range of 30 to 70 μg/mL for Moxifloxacin and 60-140 μg/mL Prednisolone and linearity graph is shown in Graph 1 and 2. The regression equation and correlation coefficient of Moxifloxacin and Prednisolone were found to be Y=12880x+3060 and 0.9999 and Y=13312x+11292 and 0.9998 respectively. The Linearity and statistical analysis of data are shown in Table 5 and 6.

The robustness was evaluated by the analysis of Moxifloxacin and Prednisolone under different experimental conditions such as slight changes in chromatographic conditions like change of temperature (±50C), flow rate (±0.2 ml/min), and wavelength (±2%). It was distinguished that there were no changes in the chromatograms, and the parameters were within the limits, which indicates that the method was robust and suitable for routine use. The complete results are shown in Table 7 and 8, and the method is having good system suitability. 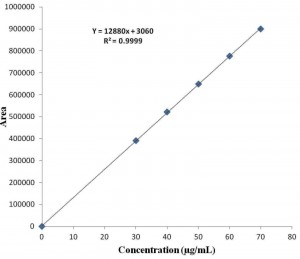 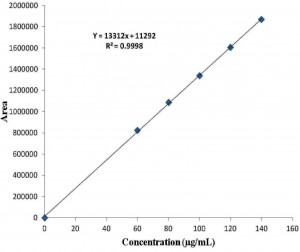 The limit of detection (LOD) has established the minimum concentration at which the analyte can be reliably detected. LOD is determined by the signal to noise ratio and generally acceptable detection limit ratio is 3:1. It was found to be 0.485μg/mL for Moxifloxacin and 0.571μg/mL for Prednisolone respectively.

This test was conducted on freshly prepared Moxifloxacin and Prednisolone standard solution was used for the evaluation of the system suitability parameters such as retention time, area, USP tailing and theoretical plates, limit of detection and limit of quantification. Five replicate injections for a system suitability test were injected into the chromatographic system. Finally the proposed method is having good system suitability and its parameters are shown in Table 9.

Forced degradation studies were conducted to evaluate the stability and specificity of the method. The acceptable limit for consideration in the present study is between 5 to 20% for chromatographic assays 16, 17. The specificity of the developed method was evaluated by using different ICH prescribed stress conditions like acidic, basic, oxidative, thermal and pho­tolytic.

These studies can be performed by taking 10 mL stock solution of Moxifloxacin and Prednisolone, each in separate 50 mL volumetric flask. 10 mL of 5N HCL was added to the stock solution and these solutions were kept at reflux for 4 hours. Finally this solution was neutralized with 5 N NaOH.

These studies can be performed by taking 10 mL stock solution of Moxifloxacin and Prednisolone, each in separate 50 mL volumetric flask. 10 mL of 5 N NaOH was added to the stock solution and these solutions were kept at reflux for 4 hours. Finally this solution was neutralized with 5N HCL.

These studies can be performed by taking 10 mL stock solution of Moxifloxacin and Prednisolone, each in separate 50 mL volumetric flask. 10 mL of 3% hydrogen peroxide added to each flask. These mixtures were kept for up to 3 days in the dark.

These studies can be performed by taking 10 mL stock solution of Moxifloxacin and Prednisolone, each in separate 50 mL volumetric flask, then sample solution were heated to 800c for 15-60 minutes.

These studies can be performed by taking 10 mL stock solution of Moxifloxacin and Prednisolone, each in separate 50 mL volumetric flask, then sample solution were directly exposed to sunlight for 15-60 minutes.

FIG. 5: CHROMATOGRAM OF MOXIFLOXACIN AND PREDNISOLONE FOR ACIDIC DEGRADATION

FIG. 6: CHROMATOGRAM OF MOXIFLOXACIN AND PREDNISOLONE FOR ALKALI DEGRADATION

FIG. 7: CHROMATOGRAM OF MOXIFLOXACIN AND PREDNISOLONE FOR OXIDATIVE DEGRADATION

FIG. 8: CHROMATOGRAM OF MOXIFLOXACIN AND PREDNISOLONE FOR THERMAL DEGRADATION

FIG. 9: CHROMATOGRAM OF MOXIFLOXACIN AND PREDNISOLONE FOR PHOTOLYTIC DEGRADATION

ACKNOWLEDGEMENTS: The authors would like to thank the management of Cipla Pharmaceuticals Ltd, Mumbai, India for the gift sample of drugs used in this investigation.