ABSTRACT: A new, simple, sensitive, precise, accurate and stability indicating RP-HPLC method has been developed for the simultaneous determination of N-Acetyl-L-cysteine and Ambroxol Hydrochloride in combined tablet formulation. The combination is mainly used as mucolytic. The study aimed at developing and validating a method which can be used easily and effectively for determination of given drugs in various formulations. The analysis was carried out at 220 nm and the range was obtained as 3-18 µg/ml for AMB and 20-120 µg/ml for NAC. Recovery studies indicated that the drug recovery from the formulation was within acceptable limits. The developed method was statistically evaluated. The %RSD values reported were less than 2 all through the validation which indicates variations in the results are minimal. Thus the proposed method of analysis was found to be simple, sensitive, accurate, precise, rapid and also economical and can be applied successfully for simultaneous estimation of both N-Acetyl-L-cysteine and Ambroxol Hydrochloride in bulk and combined tablet formulation.

INTRODUCTION: N-Acetyl-L-cysteine (NAC), ((2R)-2-(acetylamino)-3- sulfanylpropanoic acid), (Fig. 1) is mainly used as a mucolytic for the treatment of bronchitis, pulmonary diseases and other respiratory diseases 1. The viscosity of pulmonary secretions is reduced by depolymerizing the muco-polysaccharides. It is also used as an antidote in Paracetamol poisoning. NAC has been proven effective as anti-inflammatory agent 2. Recent studies suggest that NAC is a powerful antioxidant and a potential therapeutic agent in the treatment of HIV infections, heavy metal toxicity, cancer, heart disease, and other diseases characterized by free radical and oxidant damage 3.

Various spectrophotometric, colorimetric, chemiluminescence, HPLC, fluorimetric, electrochemical, mass spectrometric and UV detectors and GC have been widely applied as the primary methods of detection in biological samples and pharmaceuticals 4. 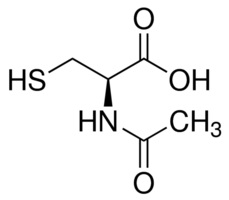 AMB is effective in treating bronchial hyper-reactivity and acts as a mucolytic along with cough suppressant action 5. 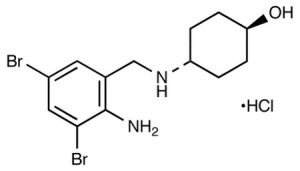 AMB is a metabolite of Bromhexine which primarily acts a mucolytic agent and expectorant for the treatment of acute and chronic disorders of excess or thick mucus. For the determination of AMB, there are various reported methods like HPLC, GC, LC-MS and Capillary electrophoresis.

Formulation details: NAC and AMB containing AMBRONAC tablets, manufactured by Tablets (India) Ltd. were used. The content of the tablets were 200mg of NAC (USP) and 30mg of AMB (IP) in each tablet.

Instrumentation: The experimental part of this research was carried out on Shimadzu HPLC using the software ‘Spinchrom’. All the glasswares used were of ‘A’ grade.

Preparation of Diluent: Mobile phase was used as a diluent.

Preparation of standard stock solution (NAC 1000 µg/ml and AMB 150 µg/ml): About 100 mg of NAC and 15 mg of AMB were accurately weighed and transferred into 100 ml volumetric flask respectively. The solution was then sonicated to dissolve and diluted up to the volume with the diluent and filtered through 0.45µ membrane filter.

Preparation of standard solution (NAC 100 µg/ml and AMB 15 µg/ml): About 1 ml of standard stock solution of NAC and AMB was transferred into 100 ml volumetric flask and diluted up to the volume with diluent and then filtered through 0.45 µm membrane filter.

Preparation of sample solution (NAC 100 µg/ml and AMB 15 µg/ml): Average weight of 10 tablets was determined and tablets were transferred into a 200 ml volumetric flask. About 100 ml diluent was added and solution was sonicated with intermittent shaking for 20 minutes. The volume was made up using the diluent. Accurately 1 ml of the above solution was transferred into 100 ml volumetric flask and diluted up to the volume with the diluent.

Specificity: To ensure the absence of interference from blank those are likely to be present in NAC and AMB drug product.

Acceptance criteria: There should be no interference from blank and placebo at the retention time of NAC and AMB.

Accuracy: To evaluate the recovery at each level. Working standards of the drugs were added at three different concentrations (levels) 80 %, 100 % and 120 %. The measurements were done in triplicates.

Acceptance criteria:  Individual % recovery of NAC and AMB at each level should be between 98 % - 102% and % RSD should not be more than 2.0 at each level.

Precision: System precision: Prepared and injected six replicates of standard solutions as per the proposed method of analysis into HPLC system. Calculated the mean, SD and % RSD for peak areas of NAC and AMB.

Method precision: Six samples of a single batch of same strength (40/25 mg) of NAC and AMB were analyzed as per the test method. The % assay and % RSD for NAC and AMB in six samples was calculated.

Acceptance criteria: % RSD and cumulative % RSD should not be more than 2.0 and % assay should be within the specification limit.

Linearity: Linearity involves selection of minimum 5 concentrations in the order of linearity.

Acceptance criteria: Correlation coefficient (R2) should be not less than 0.999.

Range: For range, data shall be considered from linearity and accuracy.

Acceptance criteria: Correlation coefficient (R2) should be not less than 0.999 and individual % recovery of NAC and AMB at each level should be between 98 % - 102 %.

Acceptance criteria: % RSD should be not more than 2.0.

RESULT AND DISCUSSION: The analytical method validation parameters were determined according to the ICH guidelines 6, 7. Before validation of the developed method, analysis of blank solution (only mobile phase), standard solution (mixed standard) and sample solution (tablet mixture) was carried out. 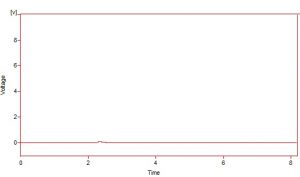 No peak was observed at the retention times of both the drugs in blank solution and thus the method is specific. 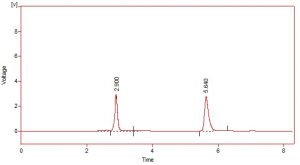 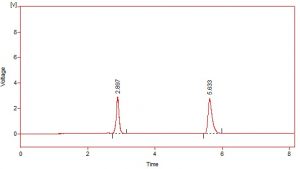 Accuracy: Initially a standard solution was analyzed and then accuracy was determined at three concentrations 80 %, 100 % and 120 %. From the % RSD values of NAC and AMB at all 3 concentrations were considered for the calculations and amount found was compared with the amount added for preparing these concentrations.

The % RSD values for all types of precision were found to be within the specified limit. This indicated that the method is rugged and can be used to analyze the formulations containing NAC and AMB effectively.

Linearity: Linearity studies were performed at six different concentrations. The linearity data was calculated on individual drug basis and checked for the R2 value. 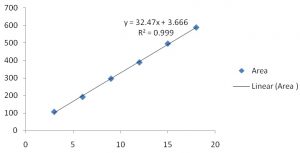 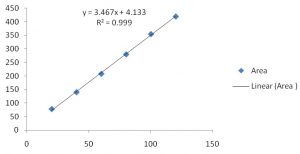 The correlation coefficient (R2) values for NAC and AMB were found to be 0.999 which were within acceptable limits. This indicated that the method is linear between the concentrations 3µg/ml and 18µg/ml for AMB and 20µg/ml and 120µg/ml for NAC.

Range: It was inferred from the data of accuracy and linearity that effective range for the estimation of NAC and AMB was between the concentration 20 µg/ml and 120µg/ml for NAC and 3µg/ml and 18 µg/ml for AMB.

Small but deliberate variations were made in the method parameters and it was found that % RSD values for all the variations were in acceptable limits. This indicated that the method is robust and that it can be used within small variations of flow rate and wavelength without having a major effect on the results of % assay values.

CONCLUSION: The method was developed and validated which concluded that the method is simple, economic, accurate, robust, precise and rugged. AMB is stable in all the conditions of acid, base, oxidation, heat and photolysis. NAC being an amino acid is not stable and shows some amount of degradation in acid, base and peroxide. Thus, the proposed method is stability indicating and can be effectively applied for analysis of NAC and AMB in bulk dosage forms as well as in combined tablet dosage form.

ACKNOWLEDGEMENT: The authors are thankful to Oriental College of Pharmacy, Sanpada, Navi Mumbai for providing all the necessary facilities required for the research work. The authors are also thankful to all the teaching and non-teaching staff and the colleagues for their constant support. Hearty thanks to our parents. Also authors are very thankful to Kores India Pharmaceutical Division, Roha and Pallav Chemicals Pvt. Ltd. Mumbai, for providing gift samples.